Windscribe is hugely popular in the VPN community. People can't seem to get enough of it. But is it perfect? Are there any cons you should know about? Find out in this updated review for 2022. 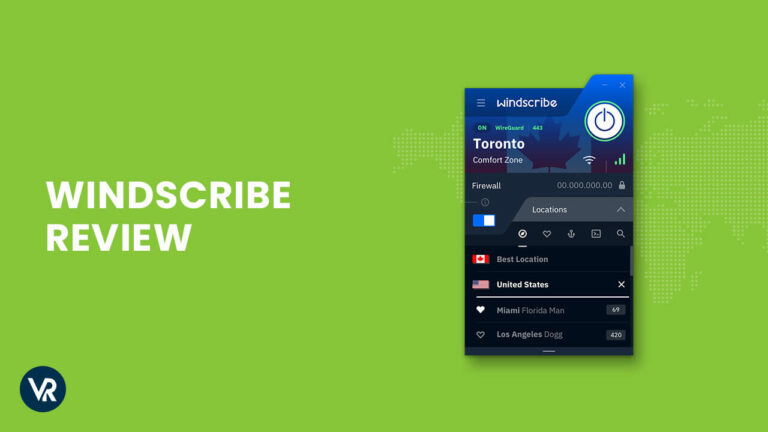 Windscribe is one of the widely used VPNs with free and paid plans available and loaded with multiple security features. Free users of Windscribe can download up to 10GB of data each month for free, while premium users can download unlimited data.
Moreover, its free users can have an access to 10 server locations, including the United States, the United Kingdom, Canada, France, Germany, Hong Kong, the Netherlands, Norway, Romania, and Switzerland.
However, If you are wondering, is Windscribe VPN trustworthy? Despite its country location, Windscribe is a reliable VPN service. It comes with industry-standard AES-256 encryption and trusted VPN protocols like OpenVPN, IKEv2, and WireGuard.

The service offers servers in over 63 Countries and 110 Cities and offers various privacy benefits such as Internet Kill Switch, Port Forwarding, ScribeForce, etc. It is compatible with different platforms like Windows, Android, Routers, and others. It also offers other streaming benefits like Netflix Unblocking and Torrenting Support too. Windscribe is also an effective free VPN for Facebook.

Windscribe VPN free may not have a good server count compared with ExpressVPN, but the speed is exceptional when streaming. However, there are some cons, which is why I have assigned it a 3.5 stars rating in this Windscribe free VPN review. If you wish to check out other VPNs that are free, please check out our list of the best free VPN services.

I have analyzed Windscribe as per my own 9-step rating criteria mentioned as under:

Pricing – How Much Does Windscribe VPN Cost? 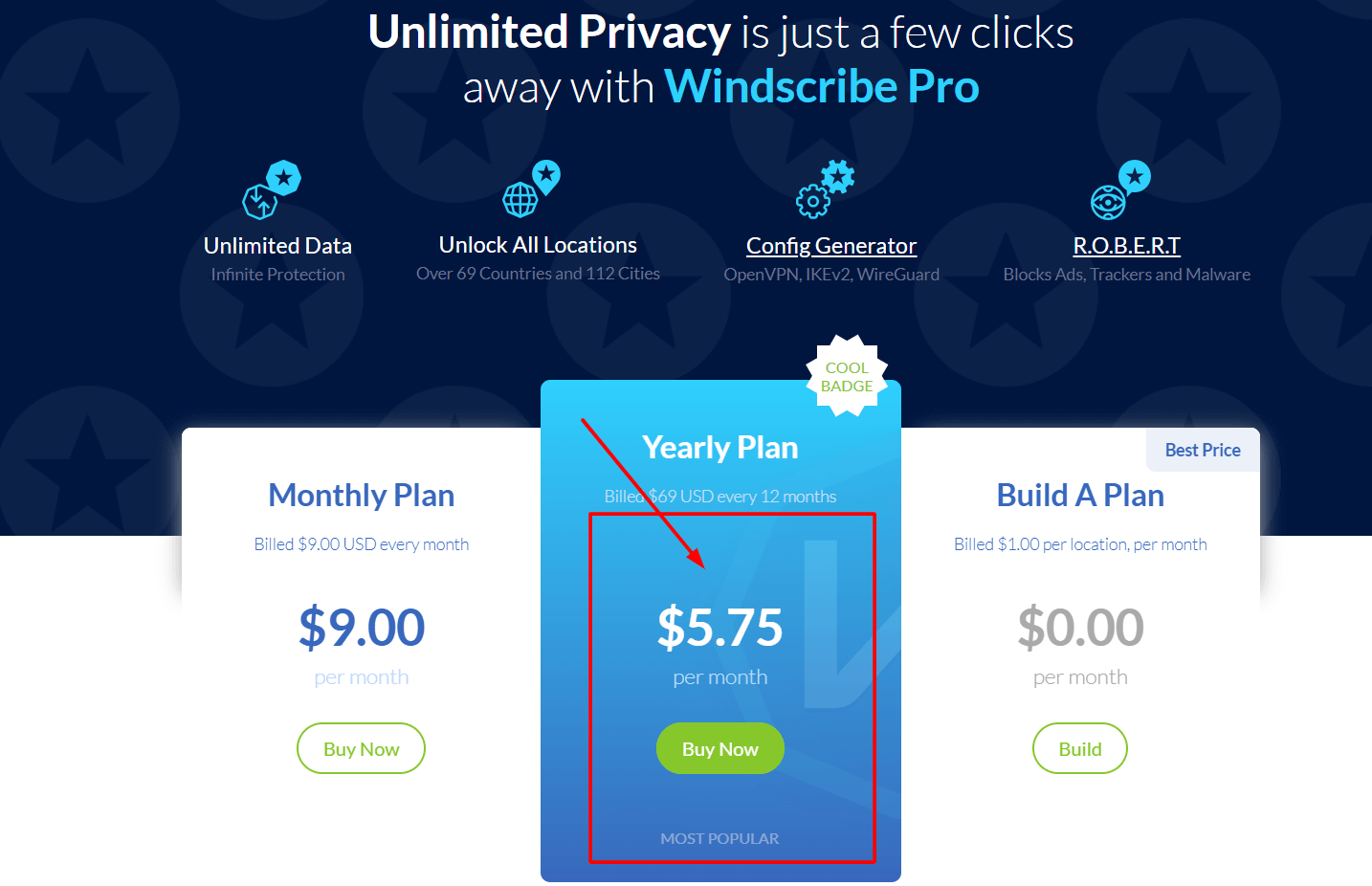 It has a “build a plan” option that charges $1 per location and per month. It adds an extra 10GB on every location you add up. As you can see we have selected 2 Pro locations and we got 30GB/month. 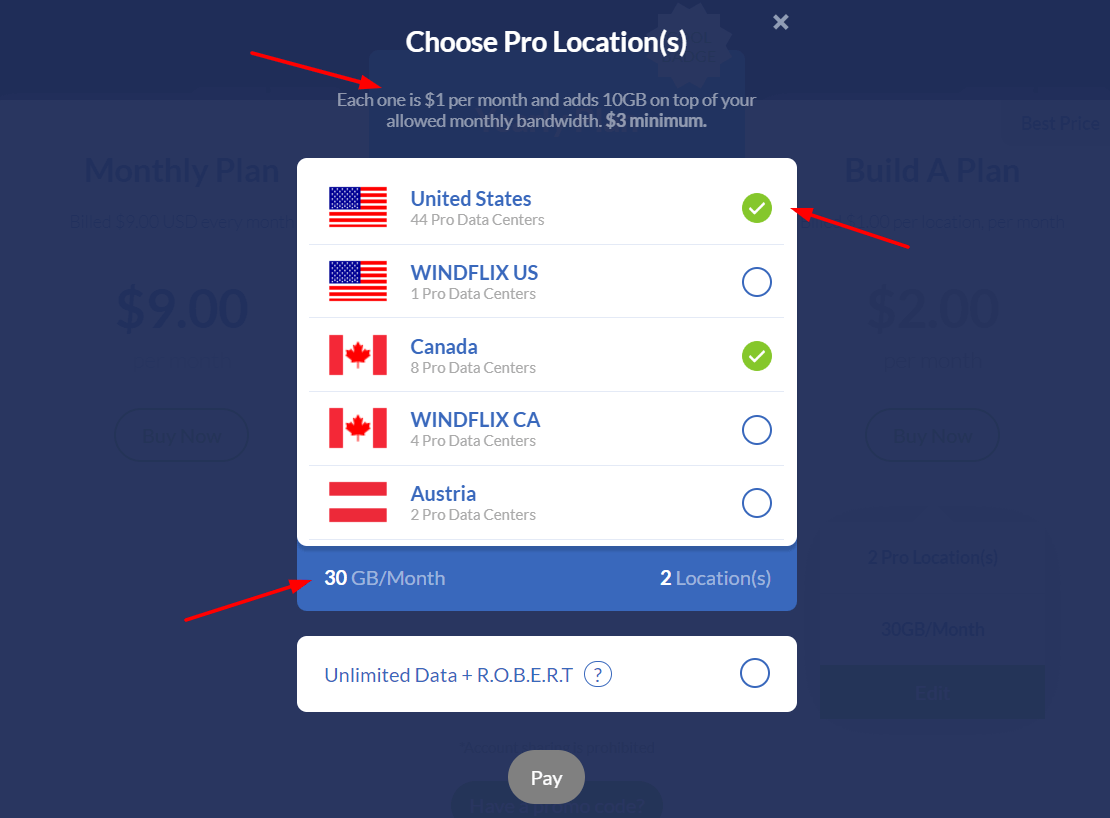 Windscribe Pro version comes with a 3-day money-back guarantee only. Check how you can avail of this Windscribe free trial.

Streaming – Is Windscribe good for streaming?

Netflix – Is Windscribe good for Netflix?

Yes, Windscribe free version is one of the few free VPNs that work consistently well with Netflix. It unblocks US and UK Netflix along with other six other Netflix libraries while maintaining consistent download speeds.

This is remarkable, considering how difficult it would be for a free service to consistently get around Netflix’s geo-restrictions. Similarly, It supports more Netflix libraries than any other VPNs we’ve tested so far on its paid plan. Windscribe Pro is a great option for Netflix at an affordable price of just $5.75 a month.

To make it confirm, whether is Windscribe a good VPN for Netflix, we connected to its free US -Atlanta server, and without any hassle, we watched Netflix shows for at least 4 hours. 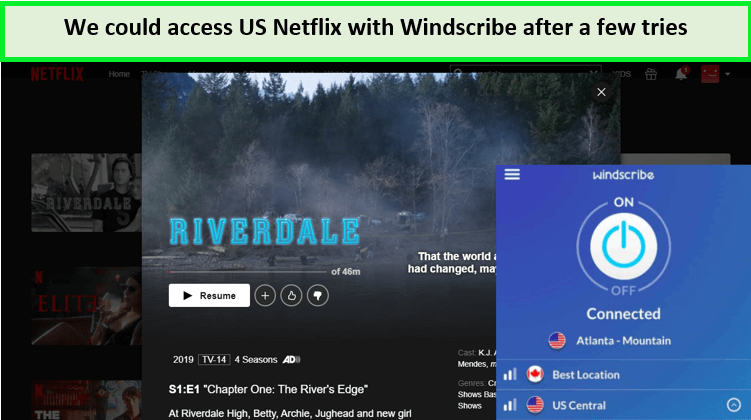 Windscribe free server has successfully unblocked US Netflix from anywhere.

Windscribe offers 10 servers in 10 different locations on its free version. Whereas on its pro plan it has servers in more than 69+ countries in 112 different sites globally. You have a wide selection of cities throughout several nations. There are numerous servers spread across various areas, but you can select your city from among them.

Here is the list of its top 7 server locations with its best city servers:

If you want to know how Windscribe VPN works, here are the simple steps to follow:

Windscribe claims that they use AES-256 cipher with SHA512 auth and a 4096-bit RSA key. They also support perfect forward secrecy. Its use of a firewall and strong AES-256 encryption is more successful than other VPNs’ use of “kill switches” to preserve your privacy and prevent data leakage. So we will check how much true this is:

Yes, Windscribe provides military-grade protection to keep you secure online. It provides AES 256-bit encryption, which virtually renders your data unreadable. Its 4096-bit RSA key and the SHA512 algorithm improve this even further. It also uses advanced security features such as Forward Secrecy, which generates new and unique encryption keys for your online traffic. The only difference between the free version and the paid version is that the free version has limitations.

Windscribe is headquartered in Canada and is a member of the 5-Eyes alliance. Let us define what this is. Alliance state members gather information about each other’s citizens and share it with one another in order to circumvent national laws prohibiting spying on one’s own citizens.

According to Windscribe Privacy Policy, they don’t keep any logs that could be used to identify you. The provider has explained its logging policy in detail:

“We don’t keep connection logs, IP timestamps, session logs, or monitor your activity. We store when you last used Windscribe as well as the total amount of bandwidth used in a 30-day period to enforce free tier limitations and prevent abuse.”

In the grander scheme of things, Windscribe has done the right thing by describing its logging policy officially. If you want to know the logging policies of VPNs other than Windscribe, read this exclusive guide.

Windscribe VPN uses two key protocols: OpenVPN/IKEv2  and WireGuard. However, its WireGuard is quicker than both OpenVPN and IKEv2. During our testing,

While writing this Windscribe free VPN review. The speed tests blew me away because Windscribe is fast, to say the least. When we conducted my Windscribe speed test, we were quite impressed by its performance. Here’s a brief table with all the speed test results compiled for your convenience.

Note: Windscribe performs well on local servers, but it slows down over long distances. Generally speaking, your speeds will be slower the further away you are from a server. We’ll show you the speed image results on both its local and long-distance servers:

To check its local server speed, we connected to its US-server speed, which is approximately 1600 km away from my location. We got 35% speed drop on 100 Mbps connections.

To check its speed in far away locations, we connected to the France server which is 6,837 km in distance from the location. We recorded a 39% speed drop on a 100 Mbps connection.

Is Windscribe VPN good for gaming?

We connected this VPN to our device and played a variety of games. So, if you are planning on using Windscribe free for gaming, then we would say it’s a bad choice because of data limitations. You will experience poor-quality graphics and constant buffering. However, Windscribe uses WireGuard protocol we would suggest looking for other best free VPN for gaming.

Note: Windscribe still performed better in the Ethernet area than all the other VPNs we evaluated. We’ve experienced 0% packet data loss and an average latency (also known as ping) of 15 to 20 milliseconds while using Windscribe online with our gaming system connected to the Internet via Ethernet cable.

One of the biggest strengths of this is its multi-platform compatibility.

It is compatible with all leading-edge platforms, including

Additionally, it offers an exclusive extension for web browsers, including Chrome, Opera, and Firefox, so that users can instantly unblock thousands of blocked sites with a single click. You may install Windscribe Firestick as well as perform manual setup on devices like Roku. It is a great free VPN for Firestick and an amazing free VPN for PC.

It gets better with smart TV apps for Kodi, Amazon, and Nvidia Shield; the VPN optimizes your streaming experience. You can also configure it on the router with the help of OpenVPN. Although this process is taxing, it gives you peace of mind by securing your entire household.

If you’re having trouble with this VPN, you can find some easy fixes in this Windscribe not working guide.

Here is a little preview of how this VPN has made itself compatible with different devices.

Here is the list of all the desktops which are compatible with Windscribe VPN:

Routers that are compatible with Windscribe are as follows:

You can get a Windscribe extension on the following browsers:

Being relatively new in the market, the service offers five modes of customer support. These include: 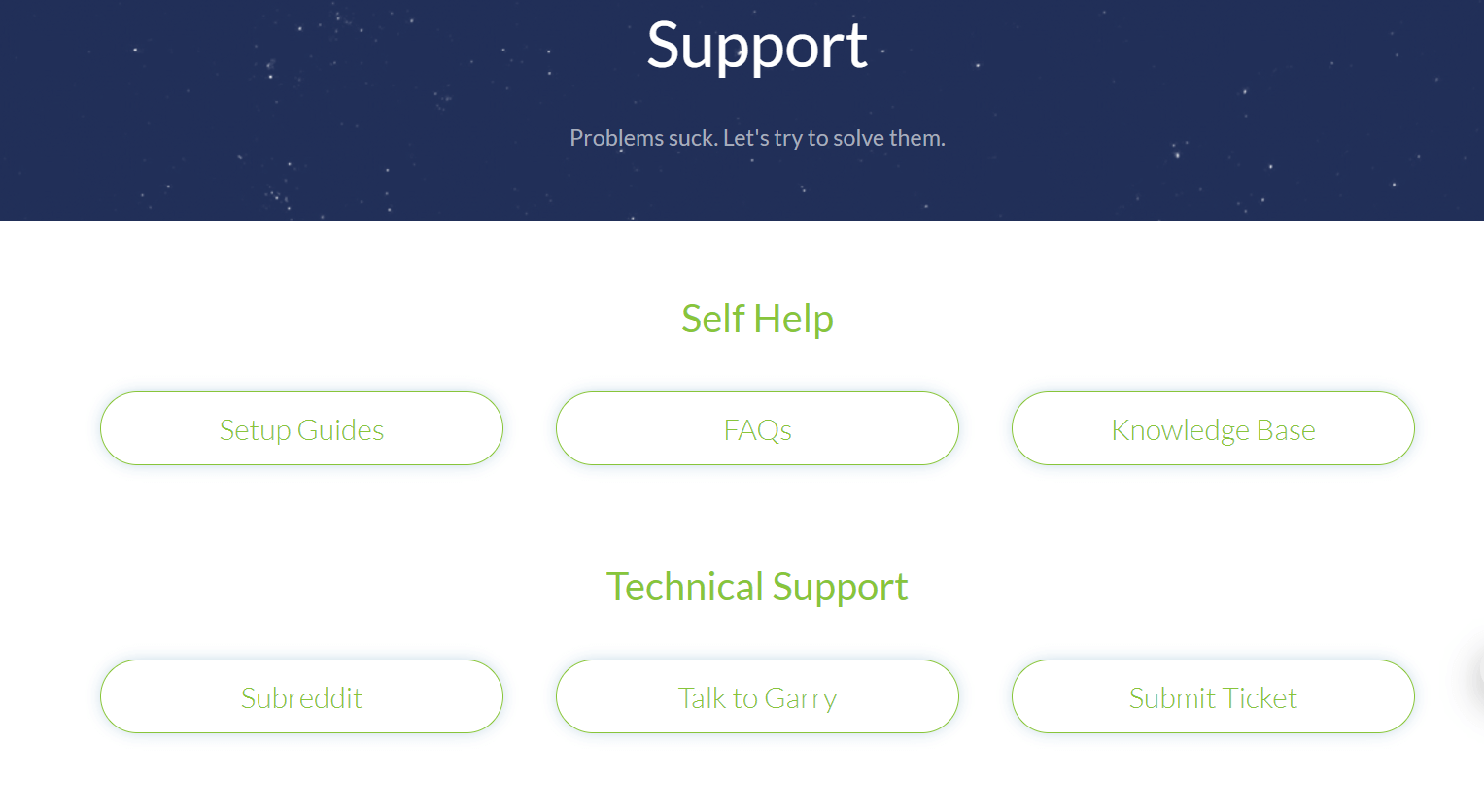 The email ticketing system aims to provide a solution to the most complex queries of subscribers. I found this option convenient in this review, but it still leaves a lot to be desired. Email queries are usually resolved within 1-2 days, making this system rather slow. This is what the ticketing system looks like. 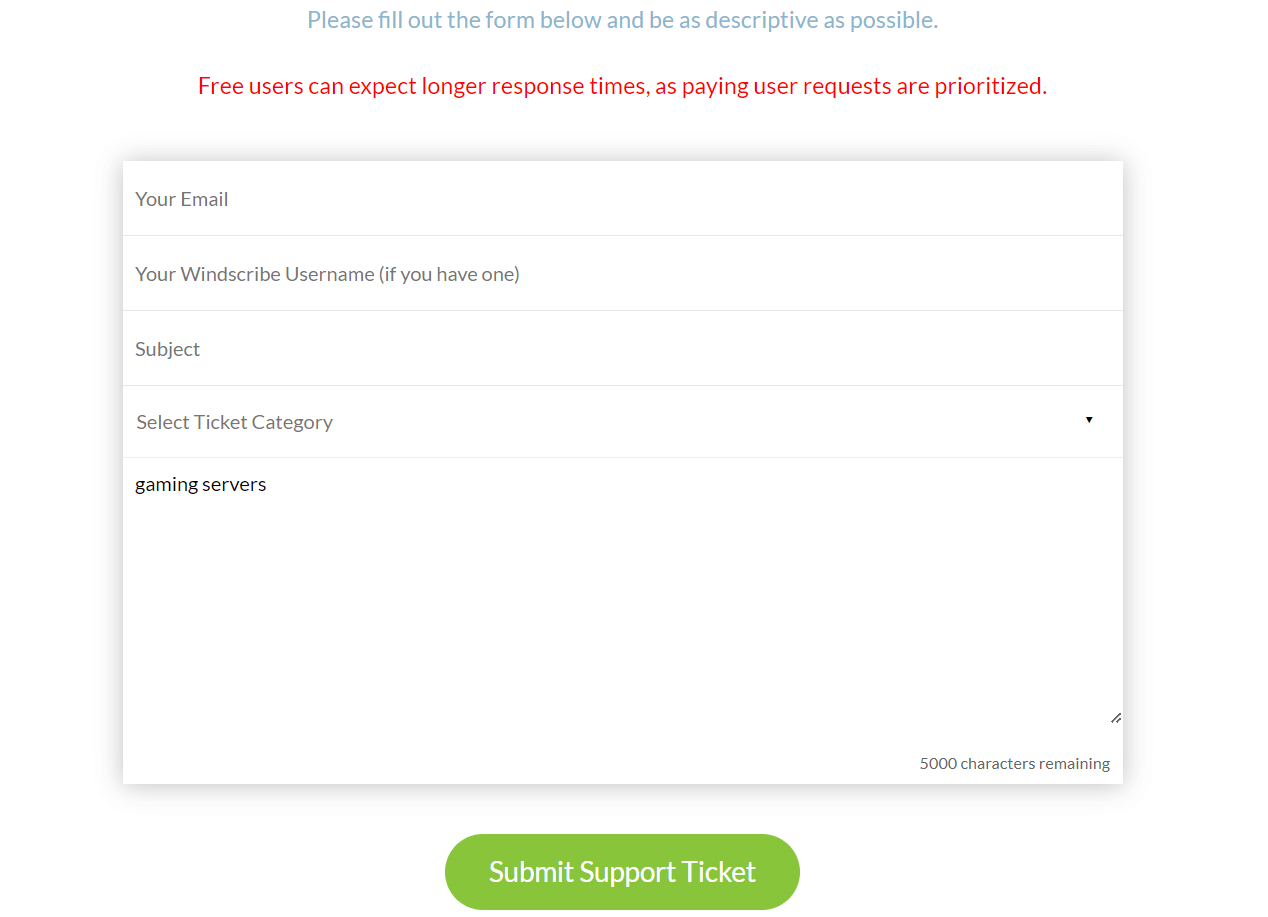 Since this was our free account so it already mentioned that free users have to wait a little longer for getting a response.

This section has step-by-step guides on how to configure the VPN on multiple platforms. It is a useful section for subscribers who wish to use the VPN on routers and Smart TV.

The strangest thing you will learn here is that its VPN has an automated chat feature. A glorified search bar gives you relevant links in response to your queries. 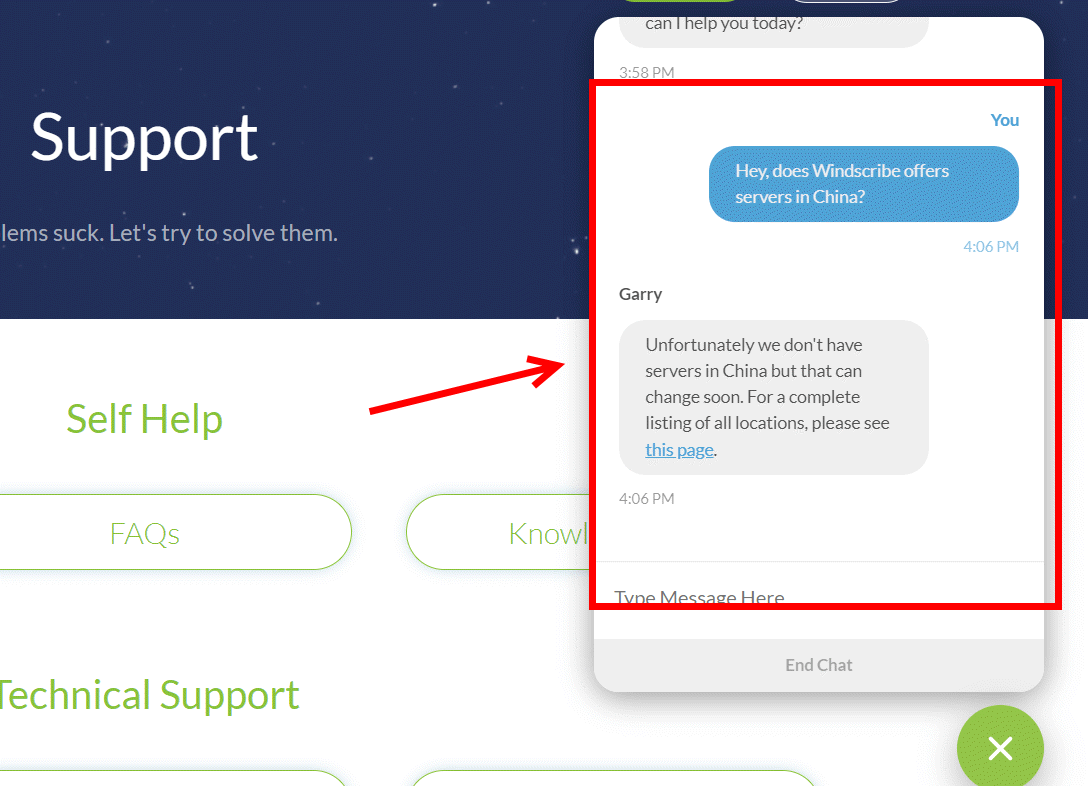 As you see above, ‘Garry(Windscribe bot) offers automated responses to your questions. The best thing is, It replied to my query in to time. Ultimately, an automated bot is no replacement for a human customer agent.

Comparison between ExpressVPN and Windscribe

In case you wish to know about the key differences between ExpressVPN and Windscribe, you can check out the below-described table:

Do I Recommend Windscribe?

No, we don’t recommend Windscribe. Although Windscribe works with Netflix and torrenting, offers strong VPN encryption, and even offers a free version, this VPN service is still not better than some of its competitors like ExpressVPN.

In short, you can download Windscribe VPN for a while but it is not worth it for long-term use.

It offers a small server count, and no 24/7 live chat option may disappoint users considerably. In contrast, other VPNs like ExpressVPN offer way more servers and features that are even cheaper.

Based on this Windscribe free VPN review, the service has earned a 3.2/5.0 stars rating overall.

You can also look at other Cheap VPN service options that are pocket friendly with detailed pros and cons instead of going for a free VPN service.

Yes, Windscribe is available for use for free and for as long as you wish. When your email address is verified you receive a 10GB of data per month with access to more than 10 different countries.

Can Windscribe VPN be tracked?|=|

No, Windscribe is a no-log VPN provider. They don’t track your activities or maintain connection logs, IP timestamps, or session records.

What does “No API Connectivity” means?|=|

No API Connectivity Windscribe means that your login credentials is not verified and that no connection can be made to Windscribe. You just have to log in to the app once and after that, you should still be able to connect to the servers because the server list is saved automatically on your device.

Is windscribe safe & Is Windscribe legal?|=|

Yes, Windscribe is safe and legal. However, it is based in Canada, (a country that is a part of the 5 Eyes alliance). But it keeps no logs and prevents DNS and IP from leaking.

In conclusion, we can suggest Windscribe to people who are looking for free VPN services that work with Netflix and value privacy without compromising speed. For tourists and torrents, this Windscribe VPN Review can be a lot of help in making up their minds. Most significantly, you can preview practically all of its features in Windscribe VPN free version before making a commitment.

You may connect as many devices as you need – all at once – and never run out of monthly data with Windscribe Pro. The majority of TV streaming services can be unblocked with Windscribe, although it does have issues with Disney+ and BBC iPlayer.