Visit Urban VPN
We do not recommend this VPN. Urban VPN is a free VPN service that can unblock streaming services like Netflix, but it operates on a P2P network which is highly unsafe, and it keeps logs of user data. Keep reading for more information.

This Urban VPN review will cover the aspects such as speed, security, jurisdiction, pricing, streaming, trustworthiness, compatibility, and more to help you make a considerate decision on whether you should use this VPN or not.

Urban VPN is a product of Urban Cyber Security and is based in the US. It is a slow VPN service that offers no features. The provider collects your web browsing data, online identifiers, and the VPN doesn’t offer a 100% risk-free no-logs policy.

Is Urban VPN free? Yes, Urban VPN is a totally free peer-to-peer VPN having servers in 84 locations. It doesn’t have a premium version, so you can easily download the app from the Urban VPN download page. The apps Urban VPN offers have simple and clear interfaces with a list of servers and absolutely no features.

That’s why we recommend you go for a premium VPN instead. If you want to protect your online privacy at less price but want great features, then ExpressVPN or Surfshark is really the best choice. Therefore, we highly recommend reading our blog to learn more about these best VPNs.

Read on to know more about Urban VPN and also get to know about the better alternatives.

Also, you can look at our other top and unbiased VPN reviews for more VPNs.

Urban VPN Review: Pricing – How Much is Urban VPN?

Urban VPN is an absolutely free VPN that doesn’t have any premium version.

It doesn’t have any hidden charges nor does it ask for money to upgrade its free plan.

It is one of the few free VPNs that doesn’t impose bandwidth or data limits. However, the VPN suffers from stability issues, slow speed as compared to other VPNs and it is behind in providing some useful features.

Here is the link where you can download its free version.

Free VPNs have tons of limitations. Check out our list of VPN deals in 2022 and get premium VPNs at discounted rates to browse and stream without any restrictions.

Is UrbanVPN Safe to Use?

UrbanVPN is not safe to use and we don’t recommend it for privacy-conscious users. It has weak encryption.

It utilizes a Peer-to-Peer VPN network, just like Hola VPN, which is completely insecure. It takes advantage of users’ devices and acts as a server for all other users.

In short, your data can be hacked using this service.

We would recommend you use a premium VPN like ExpressVPN that offers military-grade AES 256-bit encryption with advanced protocols like OpenVPN, IKEv2, and Lightway, which is its custom protocol offering blazing-fast speed and high-end encryption.

Jurisdiction – Does it Belong to Five Eyes Country?

Urban VPN is a US-based VPN service. This is the reason they have to abide by mandatory US data retention laws.

The US is a part of 5 eyes country, which means if the US authorities ask for any users’ information, then the company has to follow the law and has to give away the information.

In this scenario, you had better explore our guide that discusses the consequences of using VPN services based in 5 Eyes, 9 Eyes, and 14 Eyes Countries.

In the meanwhile, we suggest you use a VPN that is based in a privacy-friendly nation. ExpressVPN is headquartered in the British Virgin Islands, which is not a part of the 14 Eyes Alliance and the VPN has also been audited by third-party firms.

Get the Privacy-Friendly ExpressVPN!Get the Best Alternative

The VPN currently has 80+ server locations in major cities globally and the provider is expanding the service by adding new server every month. 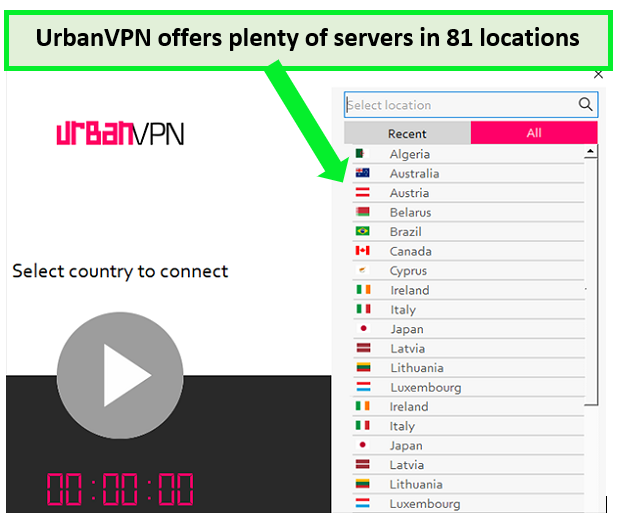 It also highlights its top VPN locations. These include the US, France, the UK, Canada, Argentina, and Belgium.

It does offer an obfuscation server which is why it gives you the freedom to connect with China and UAE servers. These countries have the toughest internet restrictions, and to avoid that they have obfuscation servers. It is also a great VPN for Cuba and other Caribbean countries where the government controls the internet.

Check out our obfuscation server guide to know how it works.

Urban VPN achieved a download speed of 13.76 Mbps and an upload speed of 8.35 Mbps when we tested it on a 30 Mbps connection scale.

Urban VPN offers unlimited bandwidth and the speeds are also decent. The server speed of Urban VPN was average. I connected to its US server to check for its speed.

If you need a better alternative, we recommend you go for ExpressVPN that offers blazing-fast speed on all of its servers.

Get Blazing-Fast Speed with ExpressVPN Now!

Urban VPN Review: Streaming – Does it Work with Netflix?

Streaming while connected to the Urban VPN US server went quite well during our test. We could easily unblock and play US Netflix by connecting to the USA server using the Urban VPN extension.

Luckily, I could easily watch “1899” with no server disconnections or buffering issues. 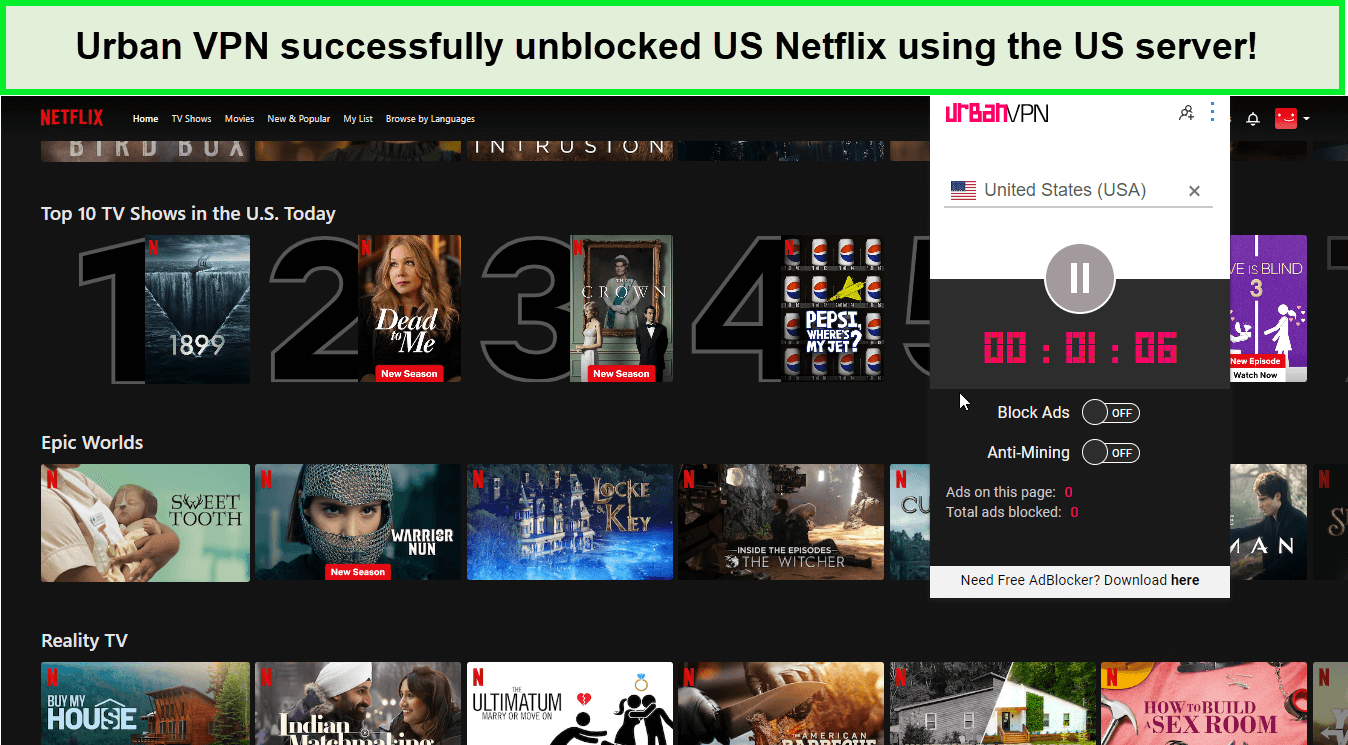 Urban VPN instantly unblocked US Netflix with no problems.

Other than Netflix, you can use the VPN to unblock other streaming sites like Hulu, Amazon Prime Video, BBC iPlayer, and more.

Urban VPN does not disclose any information about torrenting. And there is no live chat to contact customer support to confirm if the VPN supports torrenting or not.

However, upon testing, we found that Urban VPN is not suitable for downloading torrents.

We connected to an Urban VPN server to test a copyright-free torrent file and the VPN didn’t even start downloading.

In order to know which VPNs assist torrenting, explore our best VPN for torrenting guide. We recommend ExpressVPN as the best torrenting and P2P VPN. The provider offers this feature on all of its servers.

Get the Best Torrenting VPN Now!

I tested its IP leak, DNS leak, and WebRTC leak protection feature with different privacy testing tools. It passed all the tests.

I connected to the same US server. Here are the test results: 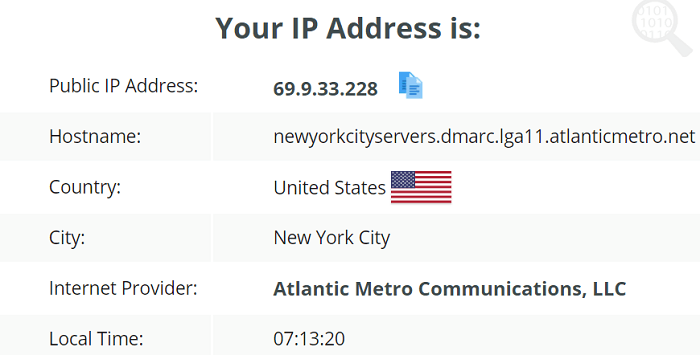 I scanned Urban VPN Windows client to find any malware or virus. I did not find any viruses to my surprise.

This Urban VPN review unveils that the service does keep logs of its users.

All of this above-mentioned information is critical to your online privacy.

Likewise, the service follows GDPR guidelines in the right way.

Other than that, the VPN says it uses the OpenVPN protocol, which is one of the high-end protocols and we confirmed it on the Windows and Mac apps. However, the website doesn’t offer any information about how they protect your data.

If you want to know about the logging policies of VPNs other than Urban VPN, read this informative guide.

However, if you want the best alternative, we recommend ExpressVPN. ExpressVPN has a strict no-logs policy and the VPN has been audited by famous auditing firms like KPMG and PwC.

Get the Log-Free ExpressVPN Now!Get the Best Alternative

Urban VPN has almost nothing to offer. The website lacks a support section, a FAQ page, a catalog of setup instructions, and troubleshooting information.

There are a few extremely brief setup instructions on a few pages of the website, but nothing that will assist you to address difficulties in the real world.

There’s no live chat either. The only way you can contact their support staff is by email, i.e., privacy@urban-vpn.com.

At present, the provider does not offer numerous support options. A live chat option would be a great addition.

If we take a look at other providers like ExpressVPN, it offers a dedicated page to answer user queries, detailed setup guides, and a 24/7 live chat option to cater to users having difficulties.

Urban VPN is compatible with Windows 11, 10, 8, and 7. Free apps for Mac, Android, and iPhone are also available. Moreover, you can also use Urban VPN with popular browsers like Edge, Mozilla Firefox, and Google Chrome.

As far as the user interface is concerned, Urban VPN apps are user-friendly and easy to navigate. All the Urban VPN apps are the simplest we’ve ever seen. They’re clear and only consist of a server list and connect button from which you can ‘On’ or ‘Off’ the VPN. 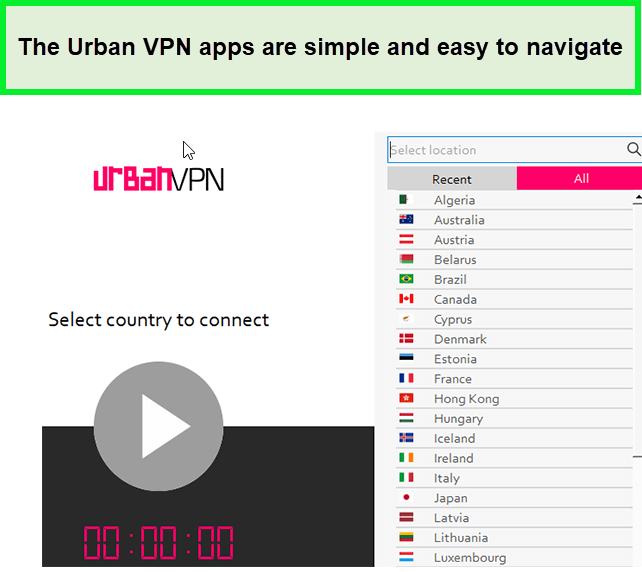 Unfortunately, due to Urban VPN’s extremely basic user interface, you are missing a few helpful options. Urban VPN does not include split tunneling, a kill switch, manual server selection, or a choice of protocols.

We acknowledge that free VPNs like Urban VPN don’t have a lot of extra features. But at the very least, we would have liked to see a kill switch.

In case you do not want to continue using the service, you can use try out other VPNs that include:

Here is a quick comparison between the two VPN providers based on their features and price. Let us know which one is the best:

If you want complete freedom, the best option is to use a premium VPN, ExpressVPN is our top recommendation.

Do we recommend Urban VPN?

No, we don’t recommend Urban VPN.

Although it is one of the few free VPNs that can give you access to Netflix and other streaming sites, the privacy factors of Urban VPN are shady.

No, Urban VPN is not trustworthy as the VPN has not yet been audited by any third party.

Also, some of the claims it makes are worrying and could put your private data at risk. The VPN also lacks customer support and you are left with resolving your issues yourself.

Does Urban VPN have a limit?

No, there are no limits on bandwidth while using Urban VPN.

You can keep all of your devices online, connected, and stream on your favorite VoD sites without worrying about reaching a data cap.

Is Urban VPN good for gaming?

Urban VPN is a decent VPN for gaming.

The provider offers servers in 84 locations which allows playing multiplayer games in every region. You can connect to any server in the world and play games like Fortnite or PUBG (as they require specific country IP addresses) with your friends.

Features like split tunneling, kill switch, and ad blocking are necessary. However, Urban VPN doesn’t offer any of these, which deranks it in this category.

Instead, choose a premium VPN like ExpressVPN that offers blazing-fast speed, high-end security, multiple important features, and a strict no-logs policy that has been audited by third parties like PwC and KPMG.