Ivacy VPN Netflix: Does Ivacy Work with Netflix in 2022?

Yes, Ivacy works with Netflix US with a high degree of reliability. However, in my testing, Ivacy could not unblock Netflix titles from other regions such as UK, Canada, Australia, Japan, & more.

Geo-restrictions on Netflix titles are something that annoy every fan of the giant streaming services. Over the years, people have come up with clever workarounds to fool Netflix and access restricted titles in their regions and one of the most popular workarounds involves using VPN services.

But the problem is that the majority of VPNs no longer work with Netflix anymore and their IP addresses have been blacklisted. Fortunately, this is not the case with Ivacy. Indeed, Ivacy still works fine for unblocking Netflix. VPNRanks have listed the top VPN that works with Netflix in 2022.

Which Netflix Regions Can I Unblock With Ivacy? [Test Results]

Ivacy has a pretty impressive history when it comes to unblocking Netflix. Despite the increasing strictness of Netflix’s anti-VPN stance and the measures it has taken to prevent access to VPNs over the years, Ivacy has seldom experienced problems duping Netflix’s geo-restrictive barriers.

But things seldom stay the same, which is why I recently tested Ivacy VPN Netflix again. But first, I contacted their customer support to see what they had to say about it: 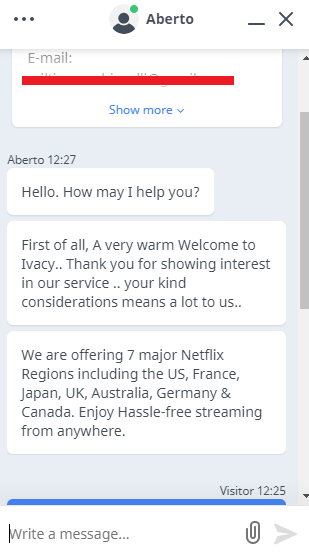 Seven Netflix regions is very impressive. But I didn’t want to take their word for it. So, I tested a few servers myself to see if Ivacy is still as good for Netflix as I remember it being.

Here are the results (note that I am only speaking of my experience here which may not be the same as anybody else’s):

So, the only Netflix region that I was able to unblock with Ivacy is the US as the screenshot below shows:

When testing for Canada, Germany, and Australia, Netflix wouldn’t even show the exclusive titles in these regions on the homepage when I searched for these. However, Ivacy was able to let me search for Japan and UK exclusive titles when connected to the appropriate servers, but I got the familiar VPN error when I tried streaming any title:

I suggest users try Ivacy out for themselves and see if it is able to unblock Netflix regions of their choice. The easiest and most risk-free way of doing that is to take advantage of Ivacy’s free trial.

Is Ivacy Fast Enough for Netflix?

Yes, Ivacy VPN Netflix is quite fast. To judge the drop in speed due to VPN, I also conducted the following tests while streaming Netflix.

When connected to the US server on a 100 Mbps connection, this is the Ivacy speed result obtained:

Needless to say, this is a fantastic caliber of performance, making this VPN great for streaming. Indeed, the fast speeds also enable Ivacy to support torrenting so users can access P2P files safely.

Why Ivacy Is Good for Netflix

Ivacy has a decent network consisting of 2,000+ servers in located in 100+ locations. With a coverage as wide as this, it is unsurprising that Ivacy can unblock multiple Netflix regions with ease. In fact, Ivacy even works in China, which is a rare ability for any VPN these days.

What’s more Ivacy supports 10 simultaneous connections. This means that you can use the same Ivacy account and use it on multiple devices at the same time, since Ivacy supports a lot of devices. For instance, you can set up Ivacy on FireStick, Kodi, and Roku as well.

In addition, all Ivacy plans offer unlimited bandwidth, allowing you to stream Netflix shows as much as you want. If you’re given to bingeing shows back to back, then Ivacy will support your cravings 100%.

There is a 30-day money-back guarantee that Ivacy offers to its users. If it has been less than 30 days since you purchased your subscription and Ivacy is not working for Netflix the way you expected, then you can claim a refund and cancel Ivacy account. You can also try the best free VPN for Netflix but we don’t recommend using one, because there are a lot of limitations in terms of speeds, and video quality.

Ivacy VPN Netflix is certainly one of the better VPNs out there as far as the ability to unblock US exclusive titles on Netflix is concerned. However, for other regions, it may not be as reliable as my experience with the VPN suggests.

You can learn more about this VPN in our detailed Ivacy review.

How many Netflix regions have you tried unblocking with Ivacy? What was your experience like? Share your thoughts in the comments below!