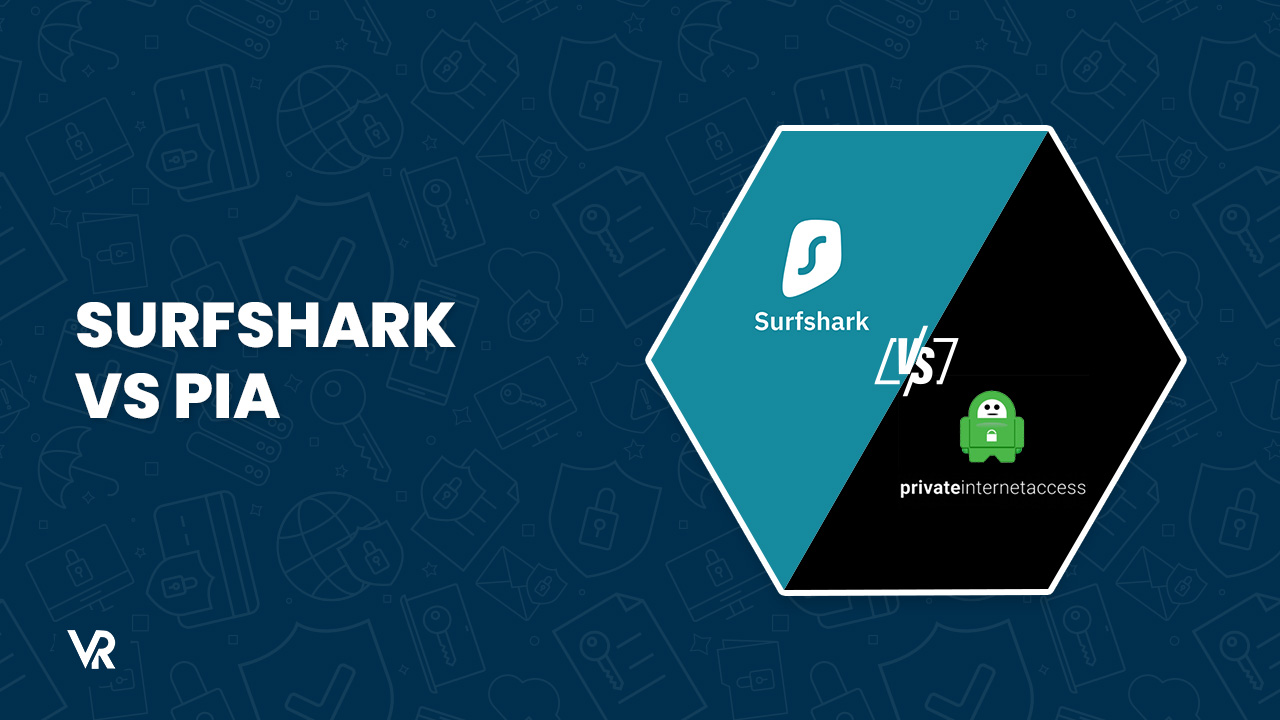 Securing your digital whereabouts has become much important than protecting your physical footprints.

You might be wondering, why did I have to disclose this bitter truth? Because learning about an appropriate VPN service has become the need of an hour for both new and pro-privacy seekers.

Therefore, I would suggest you go through my comprehensive review of PIA vs Surfshark in order to determine which VPN is better for you. I have also prepared a detailed VPN comparison chart that provides insights into 60+ providers.

Surfshark is the winner!

Completing my analysis and detailed comparison of Surfshark with PIA, I concluded that Surfshark is the winner on the basis of the following:

A Quick Comparison of PIA and Surfshark

Surfshark despite being a new entrant in the privacy industry has surpassed PIA on some important factors. For a quick summary of the comparison between PIA and Surfshark, see the table below:

Result: Surfshark is a standout performer in terms of jurisdiction, Netflix unblocking, and extra features

Private Internet Access is a US based VPN service. Conversely, Surfshark is a British Virgin Island based product. Both providers  are extremely competitive and provide users with excellent features in the privacy and security niche.

Jurisdiction is very important when you are deciding on a VPN for yourself. For example, you wouldn’t want to purchase PIA, because it is operating from US and your online privacy and data will always remain at risk. Even though PIA is a competitive VPN provider on many levels with a top-tier VPN provider like ExpressVPN, due to its jurisdiction, it is not a favorite. Check out how it performs against it in  PIA and ExpressVPN comparison.

Surfshark is one of the cheapest VPN services in the industry with its$2.05/mo (Get 84% + 2 Months FREE on 2-Year Plan) price tag. On the other hand, PIA is one of the higher priced VPNs with its 3-year plan costing $2.03/mo.

Surprisingly, both private network providers do not offer three-year pricing plans to their users.

View our detailed VPN comparison chart for 2022 to check out other budget-friendly VPNs.

You may search its terms of service section for better understanding. Surprisingly, you will be astonished to know that PIA only offers 30 days money-back guarantee. This is the reason Surfshark becomes an exciting choice for newbies as they can avail 7 Days Trial.

If a VPN service offers multiple payment methods then you can use it with complete freedom.

Both Surfshark and Private Internet Access have provided different payment options to their subscribers. Hence, you are free to pay your subscriptions from anywhere without any hassle.

Servers’ network availability plays a crucial role in the success of any VPN service. PIA in this regard has done all the hard work. They have catered their user’s privacy requirements with 35500+ servers globally.

Surfshark is a new comer in an online privacy industry. It will take ample time to increase its server network.

Still, keep your fingers crossed to see some drastic improvements in terms of its servers’ presence. At present, you can connect to any server of your choice from 3200 servers worldwide.

I found Surfshark apps to be highly responsive. It delivers excellent connectivity.

PIA, on the other hand, has a very basic-looking app that lives within the taskbar. However, it does function well enough even if the UI isn’t anything to write home about. You can also check out our PureVPN vs PIA (Private Internet Access) comparison for more details about how this VPN service performs against other premium VPNs.

Both PIA and Surfshark have literally won hearts of their subscribers in terms of compatibility with different OS nad devices. But Surfshark on Firestick and Surfshark on Apple tv are more famous amongst the users due to easy installation process and Surfshark different streaming features. You are free to download and install these privacy providers on multiple operating systems and devices. Due to its free trial, Surfshark is considered thebest free VPN for PC with unlimited bandwidth.

Furthermore, you can install these brands on Smart TVs and routers too. Surfshark also offers unlimited simultaneous connections so you can use it on multiple devices at the same time. IPVanish is another VPN that allows unlimited multi-logins. Check out our latest IPVanish vs. PureVPN comparison to see which one is more compatible with a wide range of devices.

PIA doesn’t offer a lot of extra features, but it does offer an ad blocker (MACE), 10 simultaneous connections, and SOCKS5 protocol.

Result: Both providers offer a good number of protocols

Surfshark only offers OpenVPN and IKEv2 protocols to its subscribers because of security reasons. Older VPN protocols are no longer deemed secure enough to be in use and have thus been discontinued by Surfshark. It supports newer protocols including WireGuard as it offers higher speed and security. This was also the case in TorGuard and NordVPN comparison as NordVPN has also stopped supporting older protocols and has moved towards newer ones that are more efficient.

On the other hand, PIA VPN offers some older protocols like L2TP and PPTP in addition to OpenVPN.

Result: Surfshark is safer for torrenting

Surfshark supports P2P activities on selected servers. In addition, Surfshark has the advantage of being headquartered in British Virgin Islands that doesn’t have to comply with DMCA like the US.

PIA also supports torrenting on its servers. However, since it is based in the US, it might not be a good idea to use this VPN for torrenting. Nonetheless, many users do use PIA for torrenting and they haven’t experienced any serious troubles with it.

Surfshark has surprised to its users to certain degree. Yes, you have read it accurately. It’s one of the fastest VPN service and you can enjoy decent streaming speeds while watching your favorite media stuff.

When I used 30 Mbps connection, I received 19.16 Mbps for PIA on a US server. Surfshark offers better speeds, as it recorded 27.91 Mbps while connected to a USA server.

PIA has set itself apart from other VPN services by some long distance. Yes, you read it correctly. Recently, the US based service had to prove its innocence against its no logging claims.

It becomes clear that you cannot associate online activities with users’ identities in case they use VPNs. However, the privacy policy of PIA is not as clear, as they don’t specify what kind of logs they keep.

On the other hand, Surfshark has an excellent logging policy and keeps no logs of user information.

Surfshark has added an impressive customer support feature in its armory. Likewise, you can contact its live chat to solve all your queries timely.

PIA also provides an efficient customer assistance to their users. However, it lacks live chat support.

As I already said, you will have to rely on Surfshark to unblock Netflix US content. Unfortunately, PIA does not offer such kind of luxury to its users at present.

Result: Surfshark has a better overall rating when it comes to being an all-rounder

I expect you would be now in a better state to make a wise decision about your privacy. I invested time and efforts to provide a realistic comparison between Surfshark vs PIA.

Trustpilot is one of the most popular customer review sites that offer unbiased review about distinct products and services. Surfshark is far from being perfect product.

However, it has received positive reviews from users mostly.

If I compare PIA with Surfshark, I was able to found positive reviews from PIA users as well.

Winner: PIA is an obvious victor as it has more than 5800+ reviews on Trustpilot. Besides, numerous users have raised their voices in favor of Private Internet Access.

Surfshark is the winner in this comparison with PIA.

The provider managed to outperform PIA in many critical areas such as Netflix unblocking, speed, jurisdiction, and logging policy.

Although PIA is a renowned VPN service that is rated among the best, it lacks some of the extra oomph that Surfshark so effortlessly delivers. 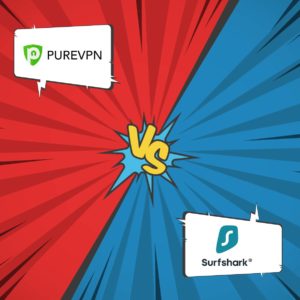 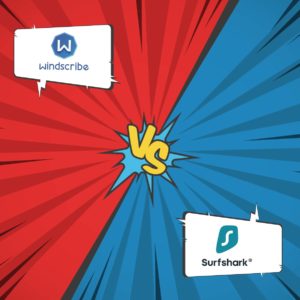 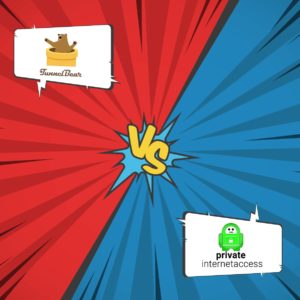 Private Internet Access vs TunnelBear: which is better in 2022? 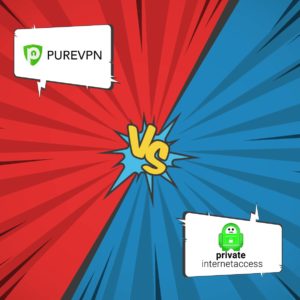