Apple TV does not support VPN installation on its OS. However, it is possible to configure a Surfshark's Smart DNS and VPN services on Apple TV through alternative means. This guide explains how you can use Surfshark on Apple TV to access geo-restricted streaming services.

Surfshark is one of the best VPNs for Apple TV. It’s pretty simple to install and offers blazing-fast speeds to enjoy your favorite content in 4K video quality. It also helps you make the most of all geo-restricted streaming platforms like Netflix, Hulu, and Amazon Prime Video.

But, there’s a slight issue – since the tvOS doesn’t come with native VPN support, getting Surfshark for Apple TV is a bit difficult since you can’t install the VPN directly.

But, don’t you worry. In this guide, we’ll briefly explain how to get Surfshark on Apple TV using the Smart DNS, AirPlay, and the router method. We’ll also provide you with step-by-step instructions to create a virtual router.

Along with detailed guides, we’ll also share why you need Surfshark for your Apple TV. So, without further ado, let’s get into it!

How to Set Up Surfshark on Apple TV

You can set up Surfshark on Apple TV using any of the four ways mentioned below:

However, please note that not every method is the right one for you. How would you know which to opt for? Look at the below-mentioned flowchart for this: 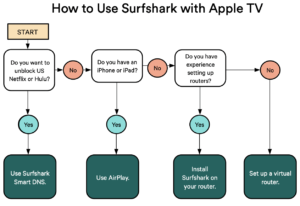 1. How to Use Surfshark Smart DNS with Apple TV

Smart DNS is a useful feature that allows you to have a VPN connection on devices that do not natively support virtual private networks, like Apple TV.

Surfshark’s Smart DNS functions by redirecting specific streaming platforms to proxy servers present across regions worldwide. As per our tests, this feature worked great at unblocking Hulu and American Netflix. We could also unblock Disney+ using Surfshark for Apple TV.

Now, let’s look at how you can easily set up Surfshark on Apple TV:

3. Click Smart DNS from the drop-down and then ‘Activate Smart DNS.’

Once you’ve found the DNS addresses on Surfshark’s site, it’s time to apply them on your Apple TV device: 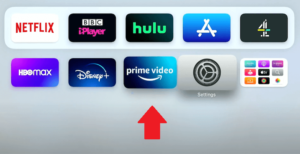 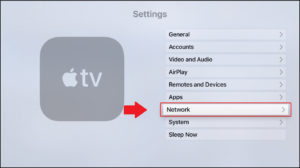 7. If you’ve connected your Apple TV to the internet through Wi-Fi, then press Wi-Fi. Otherwise, click on Ethernet. 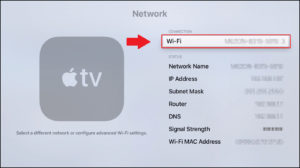 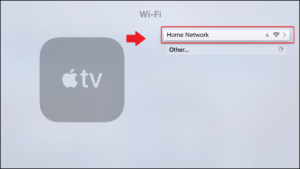 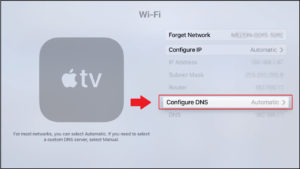 10 Then, select Manual instead of Automatic. 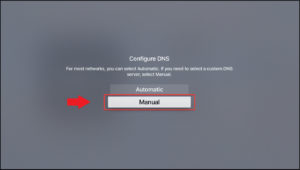 11. In the next screen, insert DNS Address 1 that you noted down. After that, click on Done. 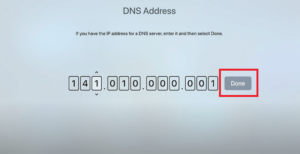 12. Restart your Apple TV. You’ll then be able to access streaming platforms like Hulu, Disney+, and Netflix with Surfshark.

While this method is quite easy, it has its pros and cons. Let’s look at them below:

How to AirPlay using Surfshark from an iPhone or iPad

With AirPlay, you just need to connect to a Surfshark server on any of your iOS devices and screencast your favorite content on Apple TV. For this, you do not have to connect your Apple TV to a VPN at all. However, please note that you may not be able to AirPlay Netflix with this method.

Following is a step-by-step guide to AirPlay content with Surfshark on Apple TV:

1. First, ensure that your Apple TV and iPhone/iPad are connected to the same Wi-Fi network. This method may not work for you if you’re using mobile data.

2. Connect to a Surfshark server of the country where the streaming platform is based. For example, to unblock BBC iPlayer, change the country on Surfshark to use it on Apple TV to the United Kingdom.

3. Head over to the streaming service you want to enjoy. If the streaming platform’s app isn’t available in your country, then you may need to create a new Apple ID. After that, click on the movie or TV show you want to watch.

4. Click on the AirPlay icon appearing at the top-right corner of your screen. 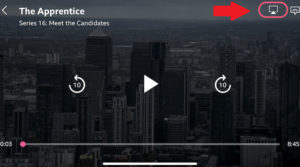 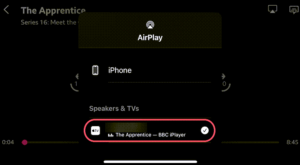 6. The movie/TV show will then display on your Apple TV.

Pro Tip: Ensure using AirPlay instead of Screen Mirroring. The Screen Mirroring option works similar to AirPlay, but offers a lower playback quality. also, make sure to use the best VPN for iPad & iPhone for fast streaming.
Pros
Cons
Get Surfshark VPN for Apple TV30 Days Money Back Guarantee

3. How to Connect Surfshark to Apple TV Using a Router

If you don’t want any less encryption than what a full-fledged VPN provides, then you need to get Surfshark on your router. When you install a VPN on your router, all the internet traffic on your network gets encrypted, making it the best option for Apple TV VPN setup.

But manually configuring a VPN on a router is a pretty technically demanding task. Also, you need a router that supports VPN connections, something like DD-WRT. For specific instructions, we recommend you check out our Surfshark router setup guide.

Since the steps are different for all router models, the following are a few basic steps to set up this Apple TV VPN:
Pros
Cons
Get Surfshark VPN for Apple TV30 Days Money Back Guarantee

4. How to Connect Surfshark to Apple TV Using a Virtual Router

Here’s how to set up a virtual router using Surfshark for Apple TV. Please note that we’re using our macOS laptop for this:

2. Plug one side of the ethernet cable into your Mac and the other into your router. Use a USB adapter if your macOS doesn’t offer an ethernet port. 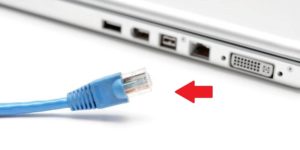 3. Launch the Surfshark app on your Mac. 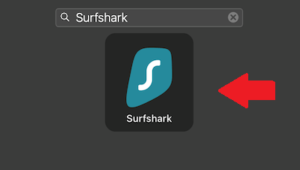 4. Visit Settings. From there, click on Protocol > OpenVPN (UDP). 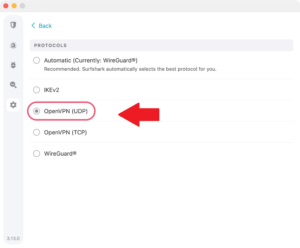 5. Connect to a Surfshark server of the country you want to access the geo-blocked content from. For example, to access Korean Netflix, connect to a South Korean server. 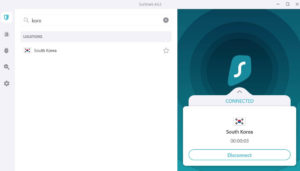 6. Go to System Preferences and tap on Sharing. 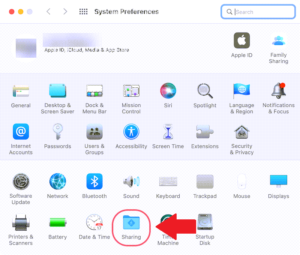 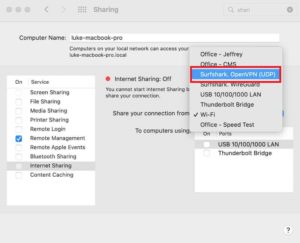 8. Checkmark Wi-Fi and tap on Wi-Fi Options. Then, use the following details: 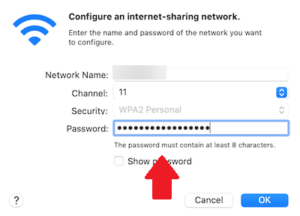 9. Click on OK. After that, click Internet Sharing. Tap Start when you’re prompted with a warning message. 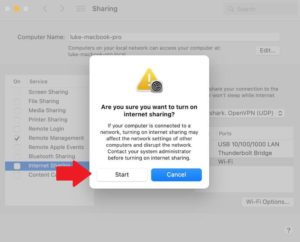 10. Connect your Apple TV to the same Wi-Fi connection.

11. Restart your Apple TV device and enjoy streaming all your favorite content.

Pro Tip: In case you face a Surfshark not working on Apple TV issue, use our Surfshark troubleshooting tips to get it back to work.
Pros
Cons
Get Surfshark VPN for Apple TV30 Days Money Back Guarantee

Why Do you Need Surfshark for Apple TV?

Surfshark is a fantastic VPN for Apple TV that conceals your location and masks your Apple TV’s IP address. This enables you to unblock geo-restricted streaming platforms, such as BBC iPlayer, Netflix, and HBO Max.

To start, you can set up Surfshark for Apple TV on all the following Apple TV generations:

Moreover, it offers a bucketful of features to keep users protected while they enjoy Surfshark’s service on Apple TV. Surfshark offers 3200+ servers worldwide, using which you can unblock all your favorite streaming platforms, including Netflix, HBO Max, DAZN, Paramount Plus, Disney+, and more. These efficient unblocking capabilities make it one of the best VPNs for streaming.

The VPN allows users to have a bufferless streaming experience, all thanks to its super-fast speeds. Speaking of which, when we conducted a Surfshark speed test, the VPN delivered a speed of 85.27 Mbps on a 100 Mbps connection. Sound amazing, right?

Moreover, the VPN is known to keep you super-safe. Its advanced security features include the latest Wireguard protocol, MultiHop, no-logs, kill switch, and Camouflage Mode.

Surfshark’s CleanWeb feature blocks all annoying and malicious ads while browsing, and its DNS/Web RTC leak blocks ensure that your privacy is always guarded. Multiple external audits have been conducted to confirm all this, which the VPN passed with flying colors.

To summarize, Surfshark offers a reliable Apple TV VPN setup and amazing features at a super-affordable price of only $2.05/mo (Get 84% + 2 Months FREE this Black Friday/Cyber Monday). You can easily cancel Surfshark anytime under the 30-day period and get a full refund, also you can discuss your queries by contacting its 24/7 live chat support. You can also try Surfshark free trial. To read more about this VPN, check out our updated Surfshark review.

Get Surfshark for Apple TV30 Days Money Back Guarantee

The drawbacks of using Surfshark with Apple TV in Australia

Following are a few drawbacks of using Surfshark with Apple TV in Australia:

How Does Surfshark Compare to Other VPNs?

Even though Surfshark is one of the best VPN services across the market, there are still a few better options that give Surfshark tough competition.

By selecting any other VPN, you may be able to configure it through a router app, unblock various streaming platforms, or solve the Surfshark not working on Apple TV issue (If you ever face it). Here’s Surfshark compared to a few of its competitors:

Does Surfshark work with Apple TV?

Yes, Surfshark works with Apple TV, but there’s no dedicated Surfshark app that you can directly install on Apple TV. Rather, you can change the DNS settings of your Apple TV and configure Surfshark Smart DNS, AirPlay your favorite content, or share a connection from a VPN-enabled router.

Can I use Surfshark on other Apple devices at the same time as Apple TV?

Yes, you can simultaneously use Surfshark on other Apple devices while using it on Apple TV, as the VPN offers unlimited multi-logins to users. This means you can use a single Surfshark subscription and connect as many devices as you like.

Will using Surfshark on Apple TV affect my streaming quality?

Can you get VPN on Apple TV?

Unfortunately, Apple TV doesn’t support VPN software, but you can install the VPN on the wifi router that the Apple TV is connected to.

Which VPN works with Apple TV?

The easiest way to use a VPN on your Apple TV is by installing ExpressVPN on your Wi-Fi router. You’ll enjoy the full privacy and security benefits of a VPN on all devices connected to your router, including smart TVs and game consoles.

Why are there no VPN apps for Apple TV?

Apple doesn’t develop the apps for Apple TV / tvOS. They have to attract developers and content providers to create apps for tvOS. As other posters have mentioned, the only utility for VPN on Apple TV would be to bypass regional restrictions or provide privacy from your ISP.

Is it legal to use Surfshark on Apple TV?

Yes, it’s perfectly legal to use Surfshark on Apple TV. Unless you’re using it in a country that bans VPNs altogether. For example, China has banned multiple VPNs, but their law doesn’t say that it’s illegal to use a VPN in the country. So, you won’t be having any problems using Surfshark in countries across the globe.

Apple TV has a huge variety of content for users in Australia, but your options get severely limited if you’re based in Australia. This is where Surfshark comes in, which you can configure on Apple TV through the methods explained above in our Surfshark on Apple TV in Australia guide.

Surfshark’s Smart DNS and VPN services are some of the most effective tools for Apple TV users to unblock streaming apps no matter where you’re located worldwide. And with our super-specific step-by-step guide, getting Surfshark on your Apple TV should be nothing less than a walk in the park!

We hope you liked our Surfshark for Apple TV guide. In case of any issues, feel free to comment and we’ll get back to you!