With the implementation of the ITE Law, the Indonesian government has banned many websites that are spreading negative content. We recommend the Best VPNs for Indonesia to access these websites. ExpressVPN is our top choice.

Most of you wouldn’t know, but the Indonesian government has banned independent news websites, sports broadcasts, dating apps, and any website criticizing government actions, according to the World Humans Watch report.

Indonesia has a population of 270+ Million (2022), which is 8 times higher than Malaysia’s 32+ Million (2022). However, with an internet penetration of 53.7%, it still has limitations on social media, streaming services, and online freedom.

The only safe way to access blocked websites is through a VPN.

In this guide, I have compiled a list of the best VPN for Indonesia – after testing 150+ VPNs, to grant you unlimited access to social media and streaming services along with ensuring complete online freedom.

Here is a brief overview of the 6 best VPNs for Indonesia.

I tested 150+ VPNs based on their encryption, server network, speed, compatibility, and money-back guarantee to find the best VPN for Indonesia.

1. The best VPN for Indonesia – ExpressVPN

ExpressVPN is the best VPN for Indonesia. Launched in 2009, ExpressVPN has completely dominated the VPN industry and has become the go-to VPN provider for streaming, online gaming, torrenting, security, privacy, and efficient data protection.

It offers 3000+ servers in 94 countries, including multiple servers in Indonesia.

With its servers in Indonesia, the users living abroad can access local Indonesian TV channels such as TVRI, RCTI, MNCTV, GTV, and iNews. 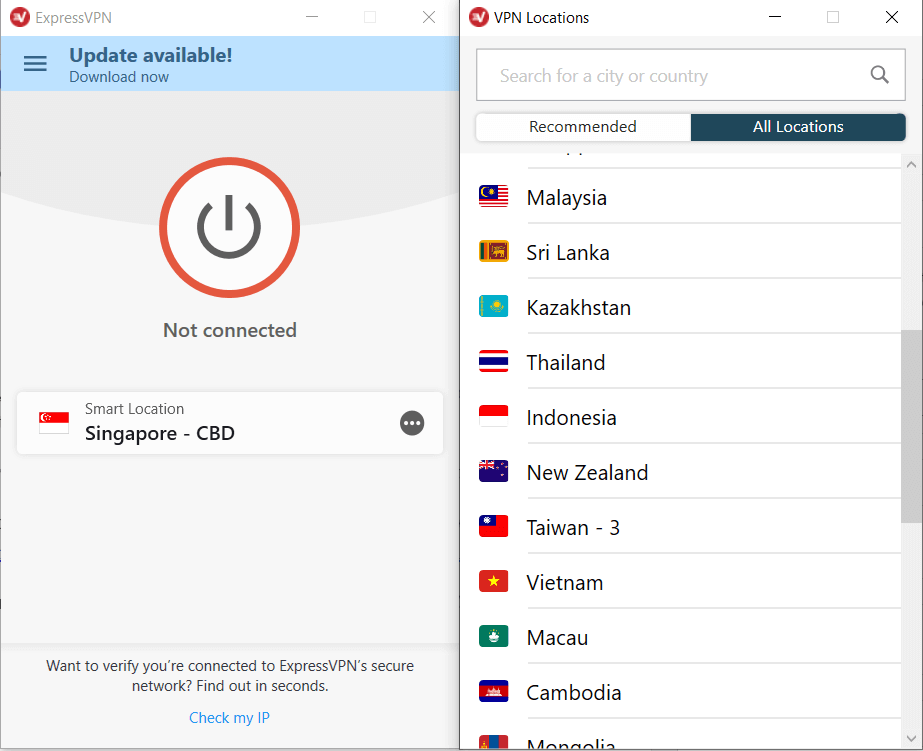 It is headquartered in the British Virgin Islands. Following the laws of the country, the provider strictly abides by its no-logging policy. This is a great advantage for Indonesian users as their online activities, and privacy will be completely secure and encrypted.

It also uses military-grade AES-256-Bit encryption for data security. Also, it comes with additional security features such as an internet kill switch, a trusted server network, and a private DNS that will prevent any DNS/IP leaks in Indonesian cyberspace.

In the below screenshot, you can see that ExpressVPN easily passes the DNS/IP leak test without any hassle.

It also offers 5 devices simultaneous connection, which means you can set up ExpressVPN on multiple devices at a single time.

This VPN is also known for offering efficient performance and reliability to Indonesian internet users.

You can connect to any server immediately to receive privacy protection to hide your identity from government agencies’ views in Indonesia.

To learn more about this provider, check out our ExpressVPN review.

Get ExpressVPN For Indonesia

Surfshark is a budget-friendly VPN for Indonesia. Launched in 2018, an ideal model for being the most affordable VPN with various low-cost subscription plans, such as $2.05/mo (Get 84% + 2 Months FREE this Black Friday/Cyber Monday).

With Surfshark you get 3200+ servers in 100 countries, including 1 server in Indonesia. Accessing international geo-restricted content such as Hotstar, Voot, Hulu, Channel4, ITV, NBC Live, and Youtube TV US will never be a problem for any Indonesian.

With its Indonesian server, expatriates can easily keep up with their local shows on local TV channels such as SCTV, Indosiar, ANTV, tvOne, and Metro TV. 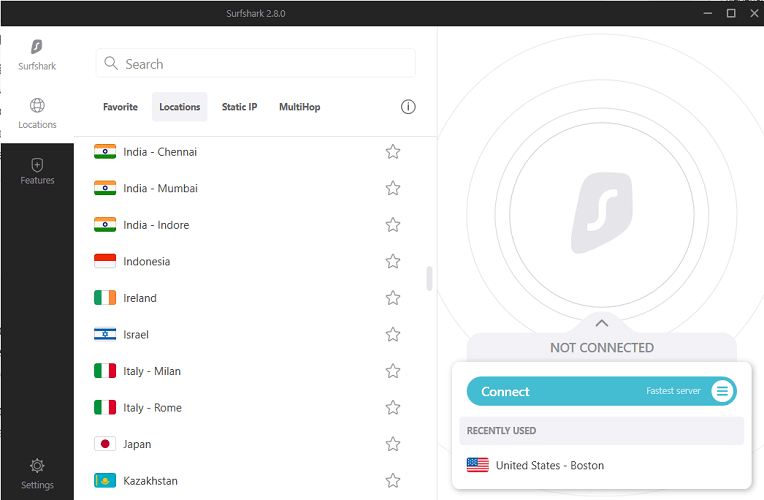 Like ExpressVPN, Surfshark operates from the British Virgin Islands, meaning no data retention laws to follow. It also offers some excellent privacy-boosting features such as clean web, multi-hop, and secure DNS.

Secure DNS feature ensures that your actual DNS/IPv6 remains completely anonymous in Indonesia. You can check out one of Surfshark’s DNS/IP leak test results below.

Perhaps the most unique feature this provider has to offer is its ability to support unlimited simultaneous connections on a single Surfshark premium subscription.

Costing $2.05/mo (Get 84% + 2 Months FREE this Black Friday/Cyber Monday) with a 30-day money-back guarantee, Surfshark is the most budget-friendly VPN for Indonesia.

To learn more about this provider, check out our Surfshark review.

Get Surfshark For Indonesia

NordVPN is the most secure VPN for Indonesia. The provider offers Indonesian users some very uncommon safety tools for the most optimized privacy, security, and data protection.

NordVPN offers 5500+ servers in 59 countries, including 3 servers in Indonesia.

While our readers, who are sitting abroad and craving some local Indonesian shows, can utilize its servers in Indonesia to access Trans7, Trans TV, Kompas TV, RTV, MYTV, and many more. 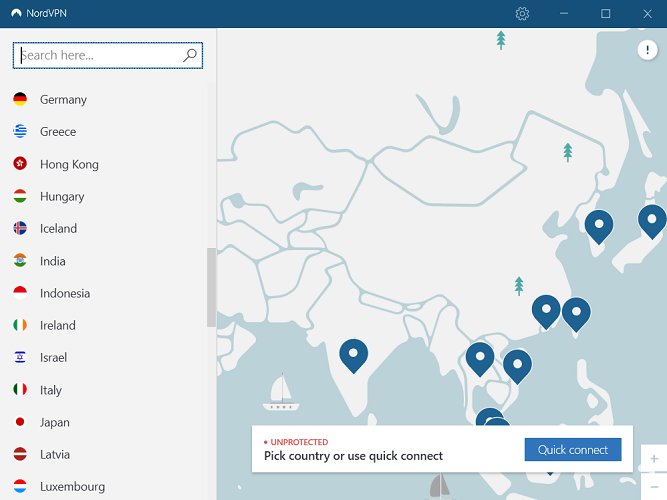 NordVPN also utilizes AES-256-Bit encryption and is equipped with features like internet kill switch, onion over VPN, and double VPN to strengthen your online privacy.

Needless to say, NordVPN easily managed to clear every DNS/IP leak test with ease. You can check out one of the results below in which NordVPN was able to mask my Indonesian DNS and IP address.

The provider supports 6 simultaneous connections on a single premium subscription. Moreover, it can be easily configured simultaneously on popular devices such as Mac, Windows, Android, iOS, Firestick, Android TV, and more.

To learn more about this provider, check out our NordVPN review.

Get NordVPN For Indonesia

IPVanish is the fastest VPN for Indonesia. It consistently delivered a remarkable speed of 98 Mbps on a 100 Mbps internet connection.

IPVanish has 2000+ servers in 75+ locations. Indonesian can use this provider to access various international streaming services, shopping websites, and online dating websites at high-speed.

Although it doesn’t have any servers in Indonesia, IPVanish’s Singapore VPN servers are more than capable of granting expatriates and foreign users unlimited access to shows on DAAI TV, Indonesia Network, O Channel, JTV, and BBS TV. 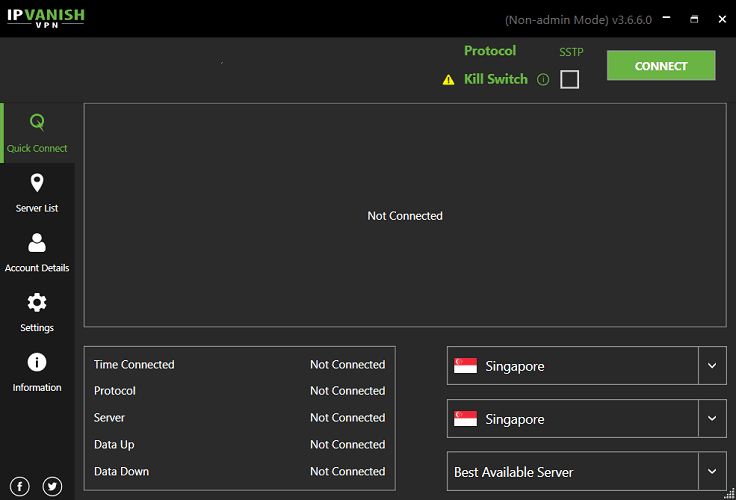 IPVanish headquarter is located in the United States. The provider offers a strict zero-log policy with an AES-256-Bit encryption mechanism to guarantee complete online privacy and anonymity.

It offers additional features such as split tunnelling, an ad-blocker, and an internet kill switch for an additional layer of security and online privacy in Indonesia.

Regardless of every doubt concerning its jurisdiction, the service easily managed to hide my actual location and IP address, as can be seen from the DNS/IP leak test result below.

It has compatibility with many devices, including Windows, Mac, Linux, Android, iOS, Firestick, Roku, Kodi, etc.

To learn more about this provider, check out our IPVanish review.

Get IPVanish For Indonesia

CyberGhost has 8900+ servers in 91 countries, including 14 servers in Indonesia. It will help Indonesians to unblock Netflix US, NHK, CCTV, France TV, DAZN, and Astro TV. 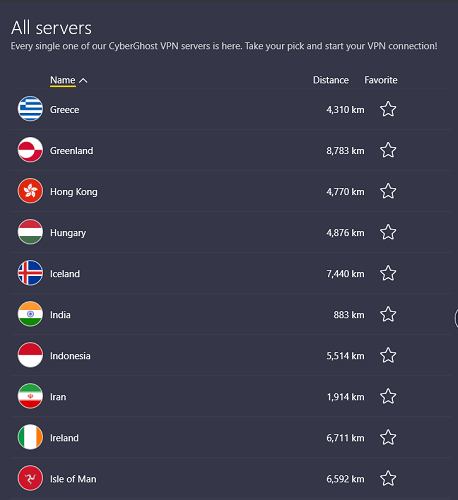 CyberGhost’s headquarter is located in Romania, and it also honours a complete no-log policy.

This means your internet activity will never be recorded on their servers hence there is no chance of anyone hacking or intercepting your personal data or information while you are connected with their network.

It also cleared every DNS/IP leak test quite comfortably, proving that this provider will help you remain anonymous under any ISP connection in Indonesia.

It costs $2.03/mo and every CyberGhost premium subscriptions comes with a 45-day money-back guarantee.

With 7 simultaneous connections, you can configure Cyberghost on all your major devices simultaneously, including Windows, Mac, Android, iOS, Android TV, Linux, Roku, and Firestick devices.

For more information on this provider, please refer to our CyberGhost review.

Get CyberGhost For Indonesia

PIA has one of the largest VPN server networks with 35000+ servers in 80 countries.

Even though it doesn’t have a server in Indonesia, there isn’t any international streaming content or website that you can not unblock in Indonesia with its global network of servers. 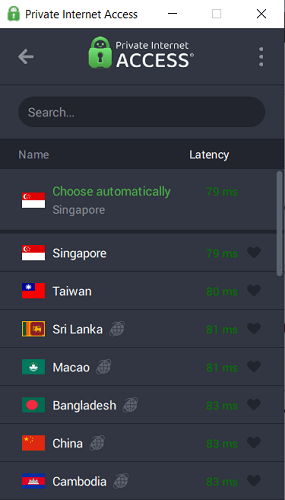 PIA’s big disadvantage is that it operates from the USA, a part of the 5-eye, 9-eye, 14-eye alliance. However, it offers a no-log policy to its users that helps you secure yourself in case of any privacy violation.

Similarly, PIA provides many privacy features such as internet kill switch, split tunnelling, and DNS leak protection to protect your online whereabouts. You can see how successfully it protected my network DNS results in Indonesia.

You can purchase PIA at the cost of $2.03/mo along with other benefits like 30 days money-back guarantee.

To read more about this VPN service, visit our PIA VPN review.

ExpressVPN is the best VPN for Indonesia.

It offers a large server network of 3000+ servers across 94 countries. These servers are encrypted with military-grade 256-bit encryption to secure your data against Indonesia’s online surveillance and ISP monitoring.

With 5 simultaneous connections, you can carry out various tasks such as streaming, torrenting, browsing, and online gaming in Indonesia on Mac, Windows, Android, iOS, Linux, and more.

If you hurry up, you can avail of ExpressVPN’s limited time “12 months + 3 months free” subscriptions that come with a 30-day money-back guarantee.

Test Methodology: How we tested the best VPNs for Indonesia

To find the best VPN for Indonesia for you, we have made sure the providers meet the following criteria:

4 reasons: why do you need a VPN in Indonesia?

Indonesia has the fourth-largest population globally (270+ Million) and is renowned for biodiversity. Still, people who live there know all the annoying geo-restrictions and censorship issues they experience every day.

Here are some of the reasons why there’s increasing use of a VPN in Indonesia:

In 2018, Indonesia’s ministry of communication and information technology (MCIT) launched a custom web crawler known as Cyber Drone 9 that filtered ‘negative content’ and have them blocked people from accessing it.

Under the Information and Electronic Transaction Law (ITE Law), the government and the ISP have the authority to block websites that are not in favour of the government or their vision. This sort of surveillance is not uncommon nowadays, and many advanced countries such as China, Japan, and South Korea are already doing mass surveillance of their population. Therefore, the only way to protect your online anonymity and privacy is by using a VPN like ExpressVPN, which is the best VPN to use in South Korea, Japan, and China.

The Indonesian government has arrested many activists for using internet services for religious matters, defamation, or spreading fake news. Freedom House assigned a score of 49/100 to Indonesia for being partly free when it comes to its citizen’s online freedom.

VPN guides for Other Countries

Here are the best VPN guides for other countries.

Is VPN illegal in Indonesia?

No, VPN is not illegal in Indonesia. In fact, according to the Global Web Index, Indonesia has the highest rate of VPN use in the world.

Which is the best VPN to watch Netflix libraries in Indonesia?

ExpressVPN is the best VPN to watch various Netflix libraries in Indonesia. ExpressVPN has servers located in 94 countries, the most countries offered among all the VPN listed above.

Furthermore, ExpressVPN has been recognized as one of the most reliable and efficient VPN providers for unblocking Netflix and various streaming services.

Is downloading torrents with a VPN safe in Indonesia?

Yes, downloading torrenting is safe in Indonesia if you use a premium VPN. With torrent-friendly features such as internet kill switch, split tunnelling, double VPN, strict zero-log policy, port forwarding, and AES-256-Bit encryption, Private Internet Access is the top choice for secure, safe, and anonymous torrenting in Indonesia.

ExpressVPN is the ultimate choice as the best VPN for Indonesia to grant you unlimited access to streaming content, protect your online identity and information from government and private organizations, and give you complete internet freedom when navigating Indonesian cyberspace.

With 3,000+ servers in 94 countries and all equipped with military-grade AES, 256 Bit encryption, you can never go wrong with this provider.

Moreover, it will always have your back with its powerful no-log policy, meaning even if someone tried to get access to any personal data from its network, they would not find anything, to begin with.

If you hurry up, you can avail of ExpressVPN amazing limited-time offer of “12 months + 3 months free” with a 30-day money-back guarantee program.

2 Responses to The Best VPN For Indonesia (April 2022 Updated)