STV Player is a UK-based video-on-demand service that is accessible for free on all major TV platforms, the internet, and mobile devices. Here, people can watch binge-worthy drama box sets, entertainment, documentaries, news, current affairs, and soaps, including popular titles like Coronation Street, Emmerdale, The Sounds, and Sanditon.

We tested 40+ VPNs on an extensive list of factors and came up with a list of the most reliable VPNs that offer a UK IP address for the streaming platform. However, amongst all, we highly recommend using ExpressVPN due to its multiple UK servers in 4 locations, fast speeds, and excellent unblocking.

Quick Overview – Best VPN for STV Player in US

Following are the best VPNs for STV Player in US in 2022:

Why Do I Need to Use a VPN for STV Player

Since STV Player is a geo-restricted streaming platform available only in the UK and Scotland, you need a VPN to bypass these geo-blocks and access its content in the United States.

If you try accessing STV Player’s website from the US, this error will appear on your screen: 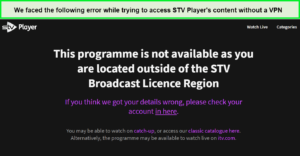 To get over these regional restrictions and watch the STV, a VPN is the key. How? Through a VPN’s servers in the UK, you can have a UK-based IP address for spoofing. This way, STV Player would be tricked into believing that you’re accessing the service from the UK, and will allow you to enjoy the streaming platform easily.

Getting the best VPN is difficult, and even more so, finding one that easily unblocks STV Player. We examined 40+ VPNs in order to identify the best 3 which are suitable for STV. These are as follows:

1.  ExpressVPN – The Best VPN for STV Player in US

ExpressVPN is the best VPN for STV Player in the United States. That’s because the VPN offers blazing-fast speeds, excellent unblocking capabilities, and robust security. Moreover, you also get an exclusive MediaStreamer feature, so you can watch STV Player on devices that do not offer native VPN support.

ExpressVPN offers 3000+ servers in 94 countries, among with 4 servers locations are in the UK – East London, Wembley, Docklands, and London. Additionally, it offers unlimited bandwidth, allowing us to uninterruptedly binge all of our favorite series.

During our tests, the London server produced the fastest results. We were able to watch the new episodes of The Sounds on STV Player in just a few seconds. 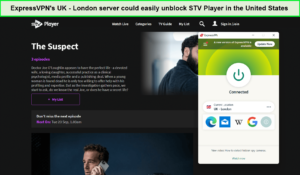 We could stream all our favorite shows on the streaming platform with this VPN.

There were no buffering or delays on our connection while streaming STV Player’s content. So, we conducted an ExpressVPN speed test on its London server. On a 100 Mbps connection, it offered 89.42 Mbps download speed, and 84.64 Mbps upload speed.

Using these speeds, we didn’t even notice VPN usage on the connection.

While connected to its UK server, we could also access various other British streaming services. We could easily unblock BT Sport, Channel 4, Britbox, UK Netflix, Sky Sports, and BBC iPlayer in the US. Moreover, with so many advantages that ExpressVPN offers, it is also turned out to be the best VPN for QuestTV.

Moreover, 5 devices can be connected to ExpressVPN at once. This VPN offers dedicated apps for Windows, iOS, Android, Linux, and macOS. You can also manually configure ExpressVPN to FireStick, routers, Smart TVs, Apple TVs, and gaming consoles.

ExpressVPN is likewise built around user security. With this VPN, there are no traffic or connection logs. What’s better is that it prevents DNS blocking with its DNS leak protection and AES 256-bit encryption.

Lastly, ExpressVPN costs only $6.67/mo (Get 49% Off + 3 Months FREE this Black Friday/Cyber Monday). You can also make the most of the service through its mobile-friendly ExpressVPN free trial and 30-day money-back guarantee for a limited time.

For more details about the VPN, go through our in-depth review of ExpressVPN.

Surfshark is the most affordable VPN for STV Player in the US. If you’re on a tight budget but want to access STV, sign up to Surfshark at $2.05/mo (Get 84% + 2 Months FREE this Black Friday/Cyber Monday), and enjoy the streaming platform!

Sursfshark has over 3200 servers spread over 100 countries. It features multiple UK servers in London, Edinburgh, Glasgow, and Manchester, so you can easily access British channels like STV Player. We connected to its Edinburgh server and accessed STV Player’s content within seconds. 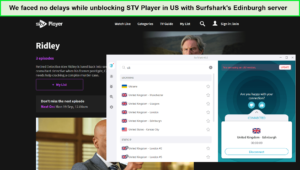 Using this VPN, we unblocked the platform without getting our IP address detected.

With Surfshark, we faced no lags while streaming. Our Surfshark speed test also revealed that the VPN delivered a swift download speed of 81.32 Mbps and upload speeds of 76.12 Mbps.

We faced a speed drop of only 19% using this VPN.

In our accessibility tests, Surfshark also worked with other UK streaming platforms. We could unblock UK Netflix, Disney+, BT Sport, Channel 4, BBC iPlayer, and Sky Sports in the US, 4Music in US and it is also best VPN for SVT Play in US.

Moreover, Surfshark’s unlimited simultaneous connection deserves praise. Users can use the Surfshark account on as many devices as they own. You can download Surfshark’s app on a variety of operating systems, including Windows, iOS, macOS, Android, and Linux. You can also install Surfshark on a router and enjoy its connection on all devices.

Lastly, its subscriptions come with a free 7-day mobile trial and a 30-day money-back guarantee for testing the service out.

For more details about the VPN, go through our in-depth review of Surfshark.

3. NordVPN – Largest Server Network for STV Player in US

NordVPN offers the largest server network to stream STV Player in US. The VPN offers over 3000 servers spread across 59 countries, among which 440+ servers are present in 4 UK cities.

These cities include Edinburgh, Glasgow, Manchester, and London. We connected to its Manchester server and faced no hindrances in unblocking STV Player in the United States. 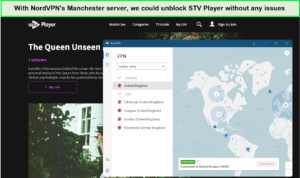 There were no issues enjoying STV Player live with NordVPN.

This VPN streamed all our favorite STV Player shows without delays. Our NordVPN speed test on a 100 Mbps connection delivered a download speed of 83.82 Mbps and an upload speed of 44.64 Mbps.

We faced no issues while streaming STV Player with these speeds.

Moreover, NordVPN offers 6 simultaneous connections, so you can connect more than a single device to the account. While offering dedicated apps for all major OSes, we could also set up NordVPN on Roku, Kodi, FireStick, routers, PS4, and more.

Additionally, NordVPN safeguards your data with the best security features such as Threat Protection and DoubleVPN.

All these features and much more are available for just $3.69/mo (Get 55% Off + 2 Months FREE this Black Friday/Cyber Monday) with a 30-day risk-free guarantee. It also offers a 7-day free trial to Android users.

For more details about the VPN, go through our in-depth review of NordVPN.

For the best VPN for STV Player, we have set a standard that the VPN provider must meet. Let’s look at all the factors in the criteria to understand what we tested the VPNs on:

VPN Not Working with STV Player in US

Firewalls, blocked ports, obsolete VPN software, and broken routers can interfere with a VPN connection. Find out below how to resolve different “VPN not working” issues.

Your VPN won’t connect correctly if your network connection is unstable. Additionally, your VPN connection may become unstable if you frequently move between WiFi and mobile data. Don’t panic if your VPN keeps disconnecting due to an erratic internet connection.

To preserve your privacy, ExpressVPN’s built-in Kill Switch will instantly turn off all of your devices. Here are 4 things you can do:

If a server is overcrowded, it may reject new connections. So, for example, if you’re having trouble connecting to a VPN for surfing UK sites, try disconnecting first, then choosing the UK server again. Your connection will be changed to another VPN server, which might fix the issue.

3. Make sure the right ports are opened:

To check if the proper ports are open for a VPN, consider adjusting your default port settings since your provider may be able to prohibit connection on a particular port. Open ports significantly increase the dangers associated with your internet connection, making your STV streaming safer.

An updated version of your VPN will resolve any bugs and safety holes impairing its performance. Try reconnecting after updating your VPN app to the most recent version.

5. Upgrade to a better VPN service

You may face connectivity and speed issues more frequently if you use a free VPN service. Unfortunately, free VPN services are unreliable or underfunded, with insufficient VPN servers and poor customer assistance.

Furthermore, these VPNs also collect your data without giving you the privacy you deserve. This is why you need to upgrade now to a premium VPN service for STV streaming in the US, and you’ll be in safe hands.

Online security starts with a click. And so do online risks. Here are the VPNs to avoid for STV Player streaming in US:

What is the best VPN for STV Player?

ExpressVPN is the best VPN for STV Player for years now. It has built a reputation of trust among its users due to its privacy features, access capabilities, and fast servers.

Why STV is blocked in US?

STV is blocked in the US due to location-specific restrictions and licensing contracts. It is only available in Scotland. Thus, if you try to view the latest episodes and live shows outside the UK, STV Player will recognize your IP address and prohibit access.

Many streaming websites, including the STV Player, use robust IP-detection technologies to reject access from outside sources. In order to access the STV, you should use the best VPN for STV Player like ExpressVPN.

Can I watch STV Player in USA with free VPN?

Yes, you can stream STV outside of the UK by using a free VPN. However, because of their poor performance and lack of security, we advise against using them. The majority of free servers have few servers but plenty of users, which clogs the network. A free VPN for STV also limits your bandwidth, which causes continuous buffering.

On STV Player, you can watch various hit British series and live programs. But if you’re in the United States and want to catch up on the streaming platform’s content, then you can only do it using the best VPN for STV Player. Connecting to its UK servers allows you to have buffer-free viewing in the States.

However, not every VPN provides you access to STV Player. After testing dozens, we highly recommend ExpressVPN due to its multiple UK servers, excellent unblocking abilities, and blazing-fast speeds.

That’s all for this guide. Feel free to leave any questions you may have about the STV Player and VPN in the comments area below. Enjoy STV streaming!