Best VPN for ViaPlay in New Zealand – Tested in 2022 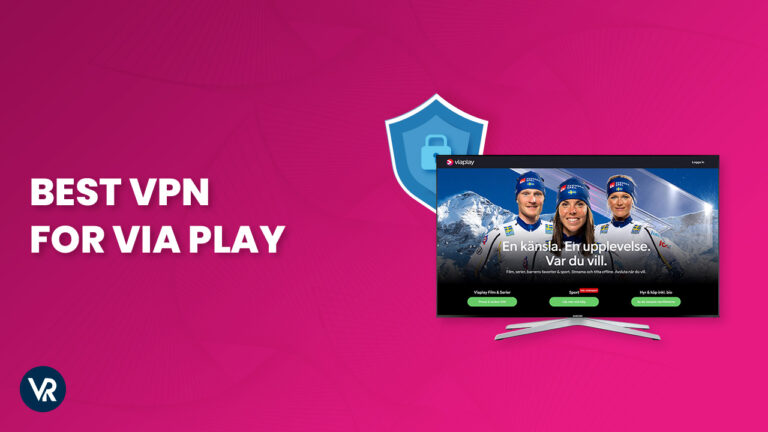 ViaPlay is a popular streaming service that streams original Scandinavian comedies, dramas, and movies. Unfortunately, it is region locked and only available in Norway, Finland, Sweden, and Denmark. So, are you wondering how to get ViaPlay in New Zealand? We’re here to help!

You will need the best VPN for ViaPlay in New Zealand with servers in countries where this streaming platform is available. A reliable VPN will assign you a new IP address to spoof your location and unblock ViaPLay in New Zealand. For example, when you connect to a Finland server, you’ll be assigned a Finnish IP address, enabling you to catch up on your favorite shows without any restrictions while in New Zealand.

But not many VPNs can do this! Only powerful VPNs with advanced encryption can do this job effectively! Therefore, we tested 30+ VPNs and narrowed down a list of the best VPNs after a detailed analysis to help you bypass geo-restrictions over ViaPlay.

Out of all the VPNs we tested, ExpressVPN is our top recommendation due to its exceptional unblocking capabilities and super fast servers in all ViaPLay countries. Let’s have a look at all our shortlisted ViaPlay VPNs!

Quick Overview: The Best VPN for ViaPlay in New Zealand

What’s the best VPN for ViaPlay in New Zealand? Just look at our short list of ViaPlay VPNs tested in 2022:

Get ExpressVPN for ViaPlay30-day money-back guarantee

Why Do You Need a VPN for ViaPlay in New Zealand?

Due to geo-restrictions, you need a VPN for ViaPlay in New Zealand because it is only available to the Scandinavian (Denmark, Finland, Norway, and Sweden) audience. So, if a non-Scandinavian user tries to access it from outside the ViaPlay countries, they will get the following error message:

“Sorry!
Where you are right now, you cannot register a new account, buy or change packages.” 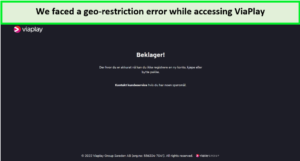 You’ll receive a geo-restricted error if you access ViaPlay in New Zealand.

However, you will need a VPN to get around these geo-blocks and stream ViaPlay outside the Scandinavian region. A VPN will replace your IP address with a new one by connecting you to a server of your desired choice. It reroutes your online traffic through encrypted tunnels, making it impossible for ViaPlay blocking technology to track your online whereabouts.

We recommend you choose a VPN that can do more than bypass geo-restrictions. It should offer end-to-end encryption, a strict no-logs policy, and deliver super-fast speeds across all its servers. Our top pick is ExpressVPN, which is great for streaming platforms and offers blazing-fast Sweden and Denmark servers for ViaPlay.

Get ExpressVPN for ViaPlay30-day money-back guarantee

After thoroughly testing 40+ VPN services to find the best VPN for ViaPlay in New Zealand, we finally came across the top 3 VPNs that aced all the tests. These VPNs are assessed through multiple factors like speed, encryption, and streaming quality so you can get the best of all. Let’s discuss ViaPlay VPNs in detail:

ExpressVPN is the best VPN for ViaPlay in New Zealand, with over 3000+ servers in 94 countries globally. It stands top in the VPN industry for streaming media, gaming, and torrenting features.

We performed various tests to check ExpressVPN’s unblocking ability and found it to be the best for accessing all restricted platforms in New Zealand. We connected to ExpressVPN’s Amsterdam server and easily accessed all ViaPlay content. All the videos were HD quality, and we didn’t face buffering while watching them. 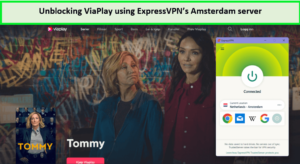 ExpressVPN servers helped us watch our favorite shows and movies on ViaPlay easily.

Besides ViaPlay, this VPN can unblock many Scandinavian streaming platforms that are restricted in New Zealand. It can bypass geo-restrictions over Netflix, Youtube, SVT Play, HBO nordic, NRK, TV2 Sumo, Hulu, Amazon Prime, and DStv in New Zealand.

As for its speed, the ExpressVPN speed test delivered a decent download speed of 89.42 Mbps and an upload speed of 84.64 Mbps over a 100 Mbps connection.

You can connect 5 devices simultaneously on a single subscription. It allows you to enjoy watching ViaPlay on whatever device you use. This ExpressVPN works flawlessly with Android, Windows, Chromebook, Mac, iOS, ChromeOS, Linux, Roku, Kodi, Firesticks, and many others.

That’s not all! ExpressVPN comes with military-grade 256-bit encryption, the gold standard in the market. It offers a kill switch and DNS leak protection that creates a strong layer of protection and prevents your data from leaking. Plus, ExpressVPN also provides a no-logs policy and TrustedServer technology for maximum privacy.

At its annual plan, you can enjoy its features for just NZ$ 10.38/mo (US$ 6.67/mo) (Get 49% Off + 3 Months FREE on its 12-Month Plan). It offers a 30-day money-back guarantee, so you can ask for a refund if you don’t want to continue the service. It has 24/7 live chat support to help resolve its customer’s issues. Else, You can get an ExpressVPN free trial in New Zealand for 7 days on mobile devices.

Check out our ExpressVPN review NZ blog to learn more about its features.

2. Surfshark – The Budget-Friendly VPN for ViaPlay

Surfshark is the budget-friendly VPN for ViaPlay in the US, with exceptional speeds and bypassing geo-restriction ability for only NZ$ 3.19/mo (US$ 2.05/mo) (Get 84% + 2 Months FREE on 2-Year Plan). It has 3200+ servers in 100 countries, including a single server location in all ViaPlay countries.

We thoroughly tested all its features and were blown away by its results. We connected to Surfshark’s Stockholm server in Sweden, giving us instant access to ViaPlay. We streamed the entire season of Day of the Dead and enjoyed watching it without lags and delays. 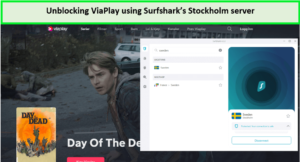 We streamed all the episodes of Day of the Dead without any buffering using Surfshark servers.

You don’t have to worry about unblocking streaming sites or watching any platform you want in New Zealand, as Surfshark is great at unblocking every restricted platform in New Zealand. We tried unblocking many other streaming services, including HBO nordic, NRK, Netflix, Youtube, SVT Play, TV2 Sumo, Hulu, Amazon Prime, and Sky Sports in the USA. Surfshark worked amazingly with all these platforms.

We spent good hours testing Surfshark’s speed. On our connection of 100 Mpbs, it managed to deliver a download speed of 81.32 Mbps and an upload speed of 76.12 Mbps.

Whether you use Android or iOS, Surfshark lets you stream on whatever device you want. It allows you to connect unlimited devices on a single VPN connection. Surfshark is also compatible with other devices such as Firesticks, Kodi, Ruku, Linux, and many others. You can also configure Surfshark on the router and stream ViaPlay on devices that don’t have built-in VPN support.

Surfshark uses 256-bit encryption technology and has a stringent no-log policy to protect your privacy. It also has a kill switch and Camouflage mode to hide your IP address and mask the fact of using a VPN during online activity.

You can buy Surfsharks at affordable prices, which come along with a 30-day money-back guarantee. We also tested its 24/7 live chat support, which responded to us very fast. You can also avail of Surfshark’s 7-day free trial on iOS and Android.

Jump on to our Surfshark review blog to learn more about its benefits and features.

NordVPN is the largest server network for ViaPlay, with over 5500 servers in 60 countries. It has 70+ servers in Denmark, 60+ in Norway and Finland, and over 140 in Sweden. We were impressed with this massive server count as it allows you to connect to servers of your choice and enjoy ViaPlay in New Zealand.

We connected to NordVPN’s Finland server, and it removed restrictions over ViaPlay within seconds. It has unmatchable speeds, and we enjoyed ViaPlay’s shows without buffering issues. 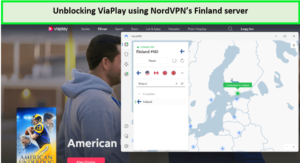 Thanks to NordVPN, we were able to enjoy American Underdog in HD.

Like every other VPN on our list, we also tested NordVPN for speed. It delivered a super-fast download speed of 83.82 Mbps and an upload speed of 44.64 Mbps on our 100 Mbps connection.

NordVPN allows you to connect 6 devices simultaneously. You can connect any device you want, including Android, Tablet, Windows, Linux, Mac, iOS, Firesticks, Roku, and Kodi with NordVPN.

NordVPN offers AES 256-bit encryption to maintain your anonymity while surfing the web and streaming online. Its obfuscated servers hide your VPN connection and internet traffic to provide maximum security. Moreover, the NordVPN Kill switch ensures your data is never exposed, even during unexpected connection drops.

Read our NordVPN review NZ blog to find out more about its benefits.

Testing Methodology: How we find the Best VPN for ViaPlay in New Zealand

There are a lot of VPNs in the market, each with its pros and cons. However, selecting a VPN for ViaPlay can be challenging. So we have listed below our methodology for choosing the best VPN for ViaPlay in New Zealand:

VPNs to avoid while accessing ViaPlay in New Zealand

With hundreds of VPNs in the industry, you cannot trust every other VPN for accessing streaming platforms like ViaPlay. You should avoid the following VPNs while accessing ViaPLay in New Zealand:

What VPN works with ViaPlay in New Zealand?

A premium VPN like ExpressVPN works amazingly with ViaPlay in New Zealand. It lets you unblock ViaPlay within seconds. You can also try out other VPNs recommended in our list to enjoy your favorite content without restrictions.

How can I watch ViaPlay in New Zealand?

You must download and install a reliable VPN app or browser extension to stream ViaPlay on your device. Launch the VPN and open the app or browser extension and connect to the country of the required IP address to play ViaPlay – Denmark, Finland, Norway, or Sweden. Once you’re connected to the server from where you want to watch ViaPlay, then open ViaPlay, sign up for an account, sign in with the credentials, and start streaming.

How can I watch Viaplay for free in New Zealand?

You can watch ViaPlay for free by subscribing to any of its packages. ViaPlay offers a two-week free trial to its new users when they choose the ViaPlay package, including series and films. You can cancel your subscription anytime within this period if you don’t want to continue. And, if you continue after the trial, your subscription will automatically renew itself.

Remember that you will not get a free trial on ViaPlay’s subscription, which includes sports. Nonetheless, you will require the best VPN for ViaPlay to stream its content in New Zealand.

We advise you to opt for one of our recommended VPNs, and ExpressVPN is our top pick. It is excellent for unblocking ViaPlay and other Swedish streaming platforms in New Zealand. Plus, it comes with a 30-day money-back guarantee, so you can try it without worrying about your money. So get it now and enjoy streaming ViaPlay with super-fast speeds.