Whenever you look for the fastest VPN service in UK, you see ExpressVPN everywhere. That’s because ExpressVPN has been labelled as a blazing-fast VPN all across the globe. But is it actually that fast? Is it worth paying a premium for ExpressVPN? Let’s find that out in our ExpressVPN speed test in UK below !

When we conducted our in-depth testing, we discovered that ExpressVPN really is the speediest VPN we’ve ever used. After testing its performance across nine (9) different server locations, we were more than happy with its performance.

If you don’t want to read the entire article, here is an ExpressVPN speed comparison table for the summarized results of its nine (9) global server locations.

In order to figure out whether ExpressVPN actually offers unlimited speeds, we tested its performance using nine (9) different servers located worldwide on our 100 Mbps internet connection.

Although download speed is the most important factor in the quality of your internet experience, we measured more than just download speed. Let us explain all 4 different measures that we tested during our ExpressVPN speed test in UK:

Now that we’re done explaining technical terms revolving around speed, let’s get right into the ExpressVPN speed test in UK we conducted on speedtest.net.

From the American region, we tested ExpressVPN’s US and Canadian servers. We tested a single server location in both countries and revealed the speeds we received.

To start, we connected to ExpressVPN’s USA – New York server to test the speeds. Since it was a local server, we got a speed drop of only 1% on our download speeds, resulting in 89.26 Mbps, whereas the drop was only 3% on our upload speeds when compared to the base connection speeds. However, the pings were a bit high.

Next, we tested how ExpressVPN performed on the servers in Canada. We tested its Toronto server and got a download speed 84.17 Mbps and an upload speed of 39.17 Mbps with just 210 ms ping. On our 100 Mbps connection, we got a speed drop of 16%, which is pretty good. However, as you can see, the upload speeds were pretty low.

Next, we tested servers from the Netherlands, UK, Italy, and Switzerland. So, we conducted an ExpressVPN speed test on a single server in each country to figure out its speeds:

The Netherlands – The Hague

Even though ExpressVPN offers multiple location in Netherlands, we connected to its The Hague server to test out its speeds. On this server, we got a download speed of 85.84‬ Mbps. That’s like a speed drop of almost 15% only on our 100 Mbps connection! We also got reduced pings of just 127 ms. Now that’s cool, isn’t it?

After the Netherlands, we tested the Switzerland region in our ExpressVPN speed test. For this purpose, we connected to its Switzerland – 2 server to test the speeds. When compared to the speed we received without a VPN, ExpressVPN dropped our download speed by only 9%. Our upload speeds slightly improved, and we got lesser pings while connected to this server.

Next, we conducted an ExpressVPN speed test on Windows in the Italian region. We connected to the Milan server of this VPN and received a download speed of 84.17 Mbps – a speed drop of 12%. While our upload speeds were similar to what we had before, our pings improved significantly and dropped to 123ms.

Last, in the European region, we tested the UK – Docklands server of ExpressVPN. This time we got a download speed of 89.17‬ Mbps, which came with a speed drop of only 5% compared to our speeds without a VPN. The server also improved our pings.

From the Asian region, we tested ExpressVPN’s servers from Hong Kong and Singapore. Let’s review their ExpressVPN speed test results below:

Moving onto Asia, we first tested ExpressVPN’s Hong Kong – 2 server, and managed to get an output of 86.67 Mbps for download speeds. The best thing was that this server actually improved our upload speeds, making it a great choice for playing games.

After that, we moved the Singapore – Jurong server. This time, our upload speeds dropped by only 1%. Isn’t that amazing? The pings were extremely low as well.

Lastly, we tested its servers from Australia. This time, we conducted the ExpressVPN speed test on Android. Let’s check out the result below:

On its Australia – Melbourne server, ExpressVPN performed amazingly well. Once we ran the test, ExpressVPN dropped our download speed by 10% and our upload speed by 2%. But overall, the connection was stable and fast. Let’s not forget that we also got low pings of 168 ms.

ExpressVPN works extremely well with torrenting in UK. When connected to its Netherlands servers, we managed to get a download speed of 70 Mbps with our 100 Mbps connection.

Using BitTorrent, we could download a large torrent file within a few minutes. The average download speed that we got with ExpressVPN was 5.4 MB/s. 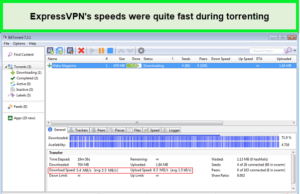 We could torrent large files within minutes with ExpressVPN in UK.

Yes, in most cases, ExpressVPN can improve your internet speeds. Across all the times and locations tested, ExpressVPN delivered an average download speed of 89 Mbps. It’s faster than Surfshark and CyberGhost, but slightly slower than NordVPN. You won’t notice much of the slowdown unless your speeds are over 100 Mbps.

Using ExpressVPN in UK, you’ll be able to achieve distinct levels of video quality for streaming along with distinct speeds. Our ExpressVPN speed test in UK confirms that this is the best VPN for bypassing ISP throttling in UK and streaming with faster speeds.

When your ISP throttles your connection during peak hours, connecting to one of ExpressVPN’s servers can actually improve your internet speeds.

We’ve personally experienced a 10-15% improvement in our internet speeds when connected to ExpressVPN in UK. However, when connecting to a server, make sure to use the Smart Location feature to get connected to the fastest available server near you.

ExpressVPN’s connection speeds depend on your location, VPN protocol, server location, and present network congestion. With that said, ExpressVPN’s upload speeds were almost the same as its download speeds in our speed test in UK.

With that said, you can always improve your speeds by connecting to a server location near your residence. Moreover, it’s highly recommended you use the Lightway protocol of this VPN service, thanks to its fast speeds and stable connection.

A Bit About ExpressVPN

No matter where you look, you’ll always see ExpressVPN rocking the top spot on everyone’s list. That’s because its 3000+ VPN servers in 94 countries(including 4 servers location in UK) are super fast. Thus, you can smoothly watch The Drop (2022) in UK using ExpressVPN!

The no-logs policy of ExpressVPN maintains user trust and ensures that the VPN would not collect any data of its users.

Additionally, the entire server network of this VPN has been turned to RAM-only that runs on PrivateDNS. These RAM-only servers wipe off all your data as soon as you disconnect from the VPN service.

You can enjoy these security features on multiple operating systems and devices, including Android, FireStick, iOS, Kodi, macOS, Roku, and more. Let’s not forget that its app for Windows is pretty user-friendly, making it the best Windows VPN.

ExpressVPN offers 24/7 live chat support in UK, which is something only premium VPNs offer. This way, if you want to cancel ExpressVPN in UK, you can easily contact them through live chat, as they also offer 30-day refunds.

Speaking of which, if you’re looking for quick troubleshooting steps for ExpressVPN, simply check out our ExpressVPN not working in UK guide.

As for pricing, ExpressVPN is available at a price of only GB£ 5.4/mo (US$ 6.67/mo) (Get 49% Off + 3 Months FREE on its 12-Month Plan). For more information about this VPN service, go through our ExpressVPN review.

Also, you can learn more about the ExpressVPN speed test in UK through Reddit reviews. Check out our ExpressVPN impressions of Reddit in our guide.

With the help of a massive server network, ExpressVPN can easily unblock Netflix in UK and other streaming platforms in UK. Hail to its P2P-optimized servers, you’ll be able to download huge torrent files within a few minutes and stream all your favorite movies in Ultra-HD quality. You can even watch Alert: Missing Persons Unit on Hulu, and Name That Tune: Season 3.

Now let’s discuss some of the most frequently asked questions about the ExpressVPN server speed test in UK guide.

Is ExpressVPN the fastest VPN in UK?

Various review sites and tech experts have frequently found ExpressVPN to be one of the fastest VPN services in UK.

How to select the fastest server on ExpressVPN in UK?

Choose a VPN server that’s nearest to your physical location in UK from the Recommended server locations list. You can also use the Smart Location feature that recommends the optimal location for its users.

How can I increase my ExpressVPN speed in UK?

Here are the following ways to increase your ExpressVPN speed in UK:

You can also use these methods if you face an error while conducting an ExpressVPN speed test in UK yourself.

Does ExpressVPN slow down Internet speed in UK?

ExpressVPN adds a layer of encryption that potentially slows down your internet connection in UK. However, ExpressVPN has a blazing-fast, constantly optimized server network, so you won’t notice any difference.

After compiling all the results from the ExpressVPN speed test in UK, we can confirm that ExpressVPN is among the fastest VPNs in the industry.

Out of all the server locations we tested, ExpressVPN managed to output connection speed in the upper 80s to 90s of Mbps. You can check out the speed test table that we covered earlier for a quick refresher.

If we talk about real-world usability experience, ExpressVPN blew me away with its blazing-fast speeds. During the testing period, we could stream movies and shows like Web of Death Mini Series 2023 in UK in HD quality, and download large torrent files pretty quickly without ever noticing any throttling. So to confirm, ExpressVPN is definitely fast.