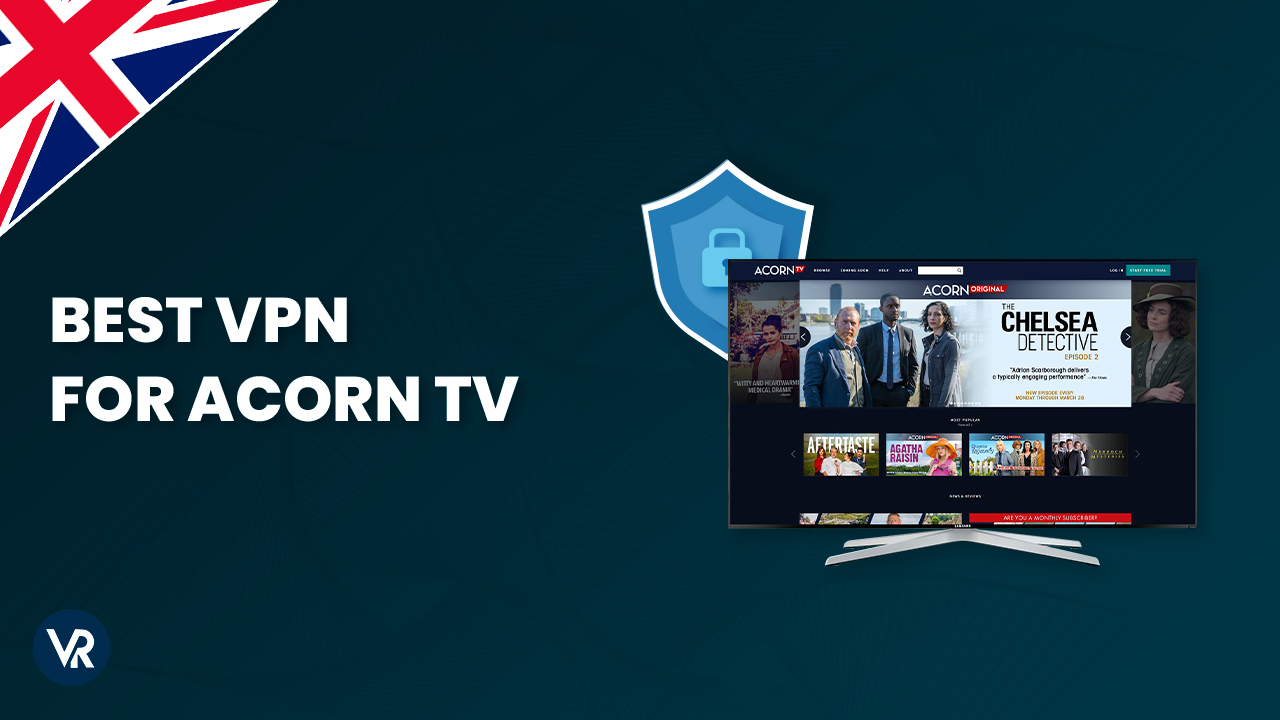 Watch your favorite content when you’re abroad using the best VPN for Acorn TV in UK!

Acorn TV, one of the major subscription-based streaming services in United States and Canada, has become a go-to place for today’s streamers. Housing some of the greatest shows and iconic series from the UK and Ireland, Acorn TV is giving a tough time to Netflix and others alike.

However, despite its widespread popularity, Acorn TV is a geo-restricted platform and can only be accessed in United States and Canada. So, if you are on a trip abroad or planning to relocate in UK, you will have to bid farewell to all of your favorite shows unless you add one more thing to your backpack, i.e., a VPN.

The best VPN for Acorn TV in UK will help you get a temporary US IP address, allowing you to access the popular content of Acorn TV in UK. So, which VPN should you go for? Well, to help you with that, we tested multiple VPN providers and selected 3 VPNs that work great in unblocking Acorn TV in UK.

Want to know more about them? Let’s dive in.

After thoroughly testing 40+ VPN services based on our rigorous testing procedure, we have shortlisted the 3 best VPN for Acorn TV in UK:

Let’s discuss each one of them in detail:

ExpressVPN has been crowned as the best VPN for Acorn TV in UK – thanks to its advanced security features, optimized servers, and unparalleled unblocking capabilities. The VPN offered a blazing fast download speed of 89.42 Mbps and an upload speed of 84.64 Mbps on a 100 Mbps connection in UK (check our speed test below).

It offers a vast collection of 3000 servers in 94 countries with 25 server locations in the US, leaving you with plenty of server options to unblock Acorn TV in UK. Because of these plenty of servers it is also the best VPN for History Channel in UK.

We tested its multiple servers and found the New York server most reliable for unblocking Acorn TV in UK. It offered consistent speed, and 4K video resolution and let us binge the complete series of “The Truth Will Out” on Acorn TV without any buffering. 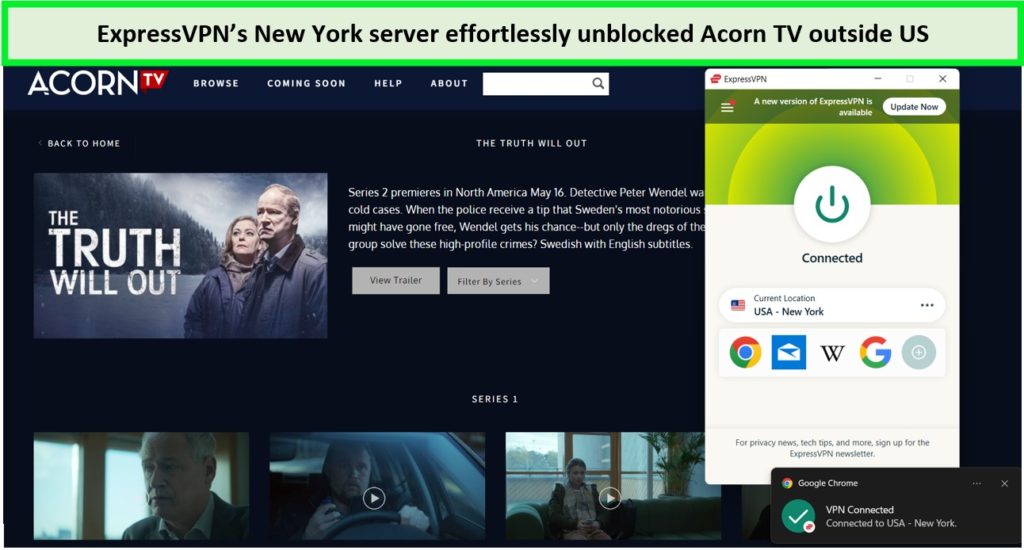 Besides Acorn TV, ExpressVPN also works with Netflix, VRV, MTV, ESPN+, HBO Max, and other US-based streaming services. Its commitment to top-class streaming is evident through its MediaStreamer feature, which allows users to set up ExpressVPN on Apple TV and watch geo-blocked content on all such devices that do not natively support VPN. We tried unblocking Tennis Channel outside UK and it worked perfectly.

When tested for speeds, our ExpressVPN speed test recorded an impressive download speed of 89.42 Mbps and an upload speed of 84.64 Mbps on a 100 Mbps base connection.

We encountered only a 13% speed drop on our 100 Mbps connection with ExpressVPN.

Being the best multi-device VPN, ExpressVPN offers unlimited bandwidth and five simultaneous connections. It offers supporting apps for iOS, Android, macOS, Windows, Linux, and other operating systems just like it is compatible with all the major devices including Xbox, Smart TVs, PS4, routers, and more. So, whether you want to use ExpressVPN on Firestick, or install it on your router to use on media players like Kodi in UK, ExpressVPN has covered it all.

For its security, ExpressVPN comes with remarkable security features like 256-bit encryption, DNS/IP leak protection, and a strict no-log policy. ExpressVPN’s kill switch makes sure to disconnect you from the internet in case there’s an unexpected drop in the VPN connection.

It features a network of 3200 servers in 100 countries with  with 600+ in 23+ US cities, all suitable for streaming Acorn TV in UK. Surfshark is the best VPN for VRV streaming in UK.

Among all of its servers, we found the Seattle server most effective against Acorn TV’s geo-restrictions. It let us binge-watch ‘The Brokenwood Mysteries’ in HD video quality and without buffering. 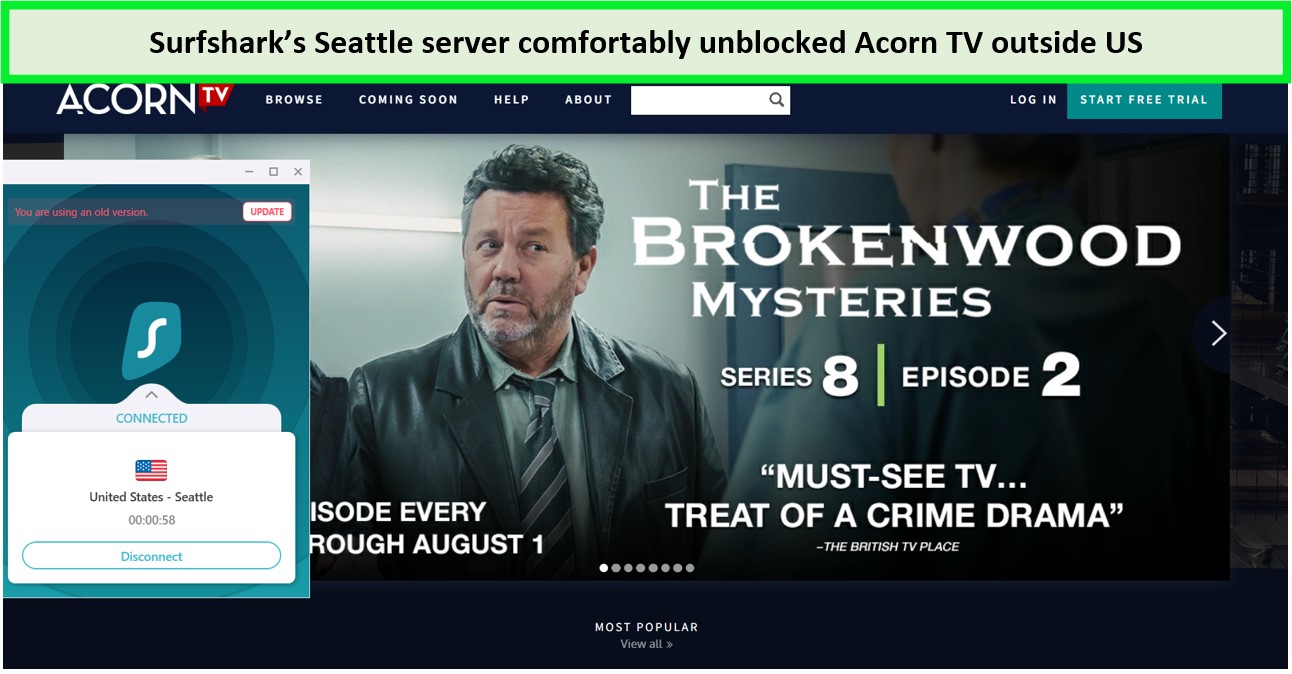 With Surfshark’s Seattle server, we could binge-watch the entire series on Acorn TV without buffering.

Powered with remarkable unblocking capabilities, Surfshark is one of the best Disney Plus VPNs and also the best VPN for Nascar to stream, along with other options for streaming like American Netflix, AMC in UK, TV ONE in UK, HBO Max, Hulu, Vudu, Crackle, Movie Channel other US-based streaming services. Like ExpressVPN, Surfskark also boasts a SmartDNS feature, allowing viewers to set up Surfshark on Roku, Apple TV, and other devices that do not natively support VPN.

As for Surfshark speed test results, we achieved a download speed of 85.42 Mbps and an upload speed of 48.64 Mbps on a 100 Mbps base connection.
Added:

We witnessed only a negligible amount of drop in our connection with Surfshark’s Seattle server.

In addition to unlimited simultaneous connections, Surfshark offers supporting apps for Android, macOS, iOS, Windows, Linux, and other major operating systems. With an easy-to-use interface and simple installation process, you can use Surfshark on Firestick, smartphones, Smart TV, Samsung TV, tablets, and other popular devices.

Even though it’s a cheap VPN for Acorn TV in UK, you can still get Surfshark’s 7-day free trial if you are a new mobile subscriber. To learn more about Surfshark’s features, read our detailed Surfshark review.

NordVPN boasts an extensive server network, making it an ideal choice for streaming Acorn TV in UK. To be exact, it has around 5500 servers in 60 countries, including including 1970+ servers in 15 US locations.

To check its unblocking abilities, we connected to its Atlanta server and easily unblocked Acorn TV within seconds. With fast speeds and incredible consistency, we could easily binge-watch the entire series of “Hidden” on Acorn TV. 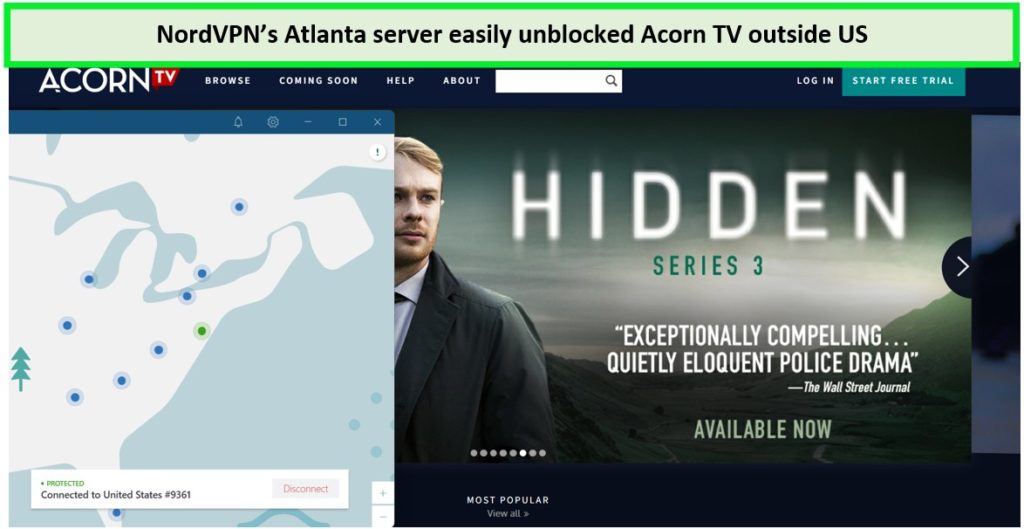 With NordVPN Atlanta, we could easily stream Acorn TV in UK in 4k video quality.

Apart from Acorn TV, you can also unblock Netflix with NordVPN, as well as other US-based streaming services such as HBO Max, Hulu, Amazon Prime Video, and CentroAmerica TV in UK. Its SmartPlay feature lets viewers set up NordVPN on Roku and other incompatible devices to stream geo-restricted titles on the big screen. NordVPN is also one of the best VPN for Cinemax in UK and a good choice for unblocking HBO Max and Hallmark in UK.

In our NordVPN speed test, it displayed impressive results, delivering a download speed of 86.18 Mbps and an upload speed of 42.13 Mbps on a 100 Mbps connection.

We barely faced any buffers or lags with these speed results.

It is highly compatible with all major operating systems including macOS, Windows, Android, iOS, and Linux. It offers six simultaneous connections. This means you can use NordVPN on Firestick, Nvidia Shield TV, Smart TVs, smartphones, tablets, and other streaming and handheld devices. Moreover, NordVPN is found to be the Best VPN for Cine Latino in UK.

Packed with highly-advanced security features like 256-bit encryption, Obfuscation technology, Double VPN, and IP/DNS leak protection, NordVPN provides utmost security and makes sure that no one snoops into your connection or privacy.

Finding the Best Acorn TV VPNs in UK – Our Methodology

We aim to recommend only the most efficient VPNs to watch Acorn TV in UK. We make sure that all our recommended VPNs comprise a fine balance of security and speed. Therefore, we carefully tested all the VPNs on the primary testing criteria including multiple factors mentioned below.

Considering these factors, we could easily conclude that ExpressVPN, Surfshark, and NordVPN are the best VPN for Acorn TV in UK.

VPNs to Avoid for Acorn TV in UK?

The internet is not the safest space when it comes to privacy. Governments spy on you, ISPs can sell your browsing activities, and advertisers collect a massive amount of data to track you across the internet. Many people turn to VPNs, believing that these services can protect them from spies and snoopers. But where reliable VPNs successfully solve a problem, there are some that can also expose you to far greater privacy risks.

While testing for the best Acorn TV VPN in UK, we have come across two such examples that are too risky to be trusted:

Does Acorn TV work with VPN in UK?

Yes, it does! Accessing AcornTV with VPN shouldn’t be a problem. In fact, a VPN service also works with major streaming platforms like BBC iPlayer, and Netflix. VPN apps are available for iOS and Android, along with desktop support for macOS and Windows. Once connected to an US VPN server, you will be able to watch Acorn TV in UK.

How can I watch Acorn TV in UK?

Acorn TV is only available for viewers in Canada and US, so if you try to watch it from another country, you’ll encounter geographical restrictions. This means that you could lose access to your favorite streaming services while traveling abroad. Fortunately, it’s pretty easy to bypass these restrictions using a VPN in UK.

Does ExpressVPN work with Acorn TV in UK?

Yes, it does! ExpressVPN‘s super-fast servers enhance your Acorn TV streaming with top-notch security and online privacy in UK. In case of any error or technical glitches, you can contact its customer support, available 24/7 via email or live chat, to resume your streaming again.

Is Acorn TV free with a VPN?

Acorn TV is rapidly growing in popularity thanks to its reduced cost and highly-entertaining content catalog. However, the service is geo-restricted and you would need a VPN to access it in UK .

Therefore, we selected the best Acorn TV VPN in UK that offer fast speeds, robust security, and top-notch video quality while streaming Acorn TV in UK. Among them, ExpressVPN tops the list as the best VPN for Acorn TV in UK. The service allows you to instantly unblock Acorn TV’s geo-restriction and enjoy unlimited bandwidth of streaming on any of your preferred devices quite effortlessly.

So, are you ready to relish the new binge-list on Acorn TV this weekend? Get your VPN subscription now!