Is SDP better than VPN in UK? 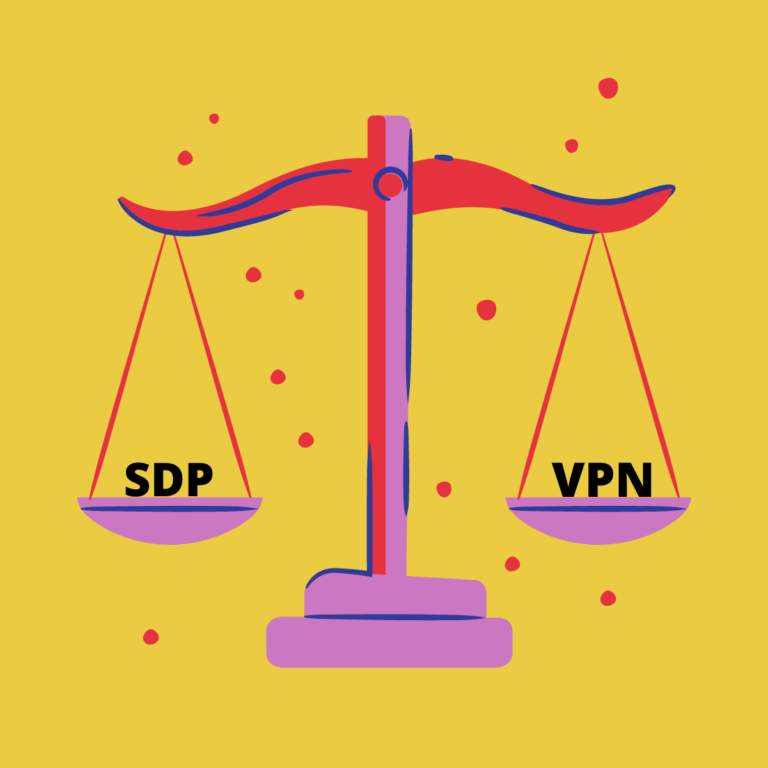 Is SDP better than VPN in UK? Yes,(SDP) is considered better than a VPN. It disables reconnoitering attacks and confirmation of the user and/or device at the packet level using identity-based networking technology. Unlike a VPN’s permissive access, it enforces restricted, identify-based access in UK.

The frequent use of mobile devices and public Wi-Fi connections have caused the resources to be accessed anywhere in UK. With global accessibility, there’s also a need for balanced security. As many of our devices are no longer behind the network perimeter and have moved on to the cloud, a separate need to increase remote access security can be felt. This increase in the cloud highlights the disadvantages of a VPN and the need for a next-generation VPN in UK. Here comes in Software-Defined Perimeter (SDP) that can function as a next-generation VPN in UK.

This article compares SDP and VPN in UK and tries to find answers to questions such as, “what is the difference between an SDP and VPN?” and “why SDP’s are a compelling alternative to VPNs?“.

Even though SDPs can be termed as next-generation VPNs, they still have a long way before they can truly surpass the best VPN Services for 2022 – Fast, Reliable & Secure in terms of speed, security, and performance.

How is SDP better than VPN in UK?

SDP is better from VPN mainly due to the way it enables custom internal network access policies in UK. Whereas a VPN only provides unlimited network access to users. While VPN in UK limits the visibility across the network for IT, SDP doesn’t place any such restrictions.

We will compare the two and evaluate them based on Security, Management, and Speed to determine how SDP is different from VPN in UK?

Speaking of a Virtual Private Network in UK, unlike SDP, there isn’t any verification process before handing out access to the network. Although it comprises different encryption and security protocols, the open ports are left unguarded and exposed to the internet. Its access mechanism is primarily based on IP addresses with no device risk assessment, including the difficulty to enforce least privilege access.

Also read: 6 Most Secure VPNs with military-grade encryption in 2022

On the other hand, a Software-defined perimeter – being identity-centric access – completes a verification process before providing access to the network in UK. It keeps the applications invisible until the identity of the user has been authorized and authenticated. Not only does it offer secure access for any application, cloud, or on-premise regardless of the user location, it also offers privileged access through IAM integration. Continuous risk assessment at the device, user, and application levels is also an SDP trademark.

A VPN has various vulnerabilities and is easily misconfigured, particularly when integrating with other technologies. Multiple VPNs can be deployed to enable network segmentation, but each of them comes with its own software, management, and configuration that is not always neat. The network or IT managers will have to configure each of these VPNs, and when their policy changes, they have to update each of them, which is very time-consuming.

As VPNs are expected to be always available, security patching, configuring, and hardening of the VPNs for the employees that are working remotely doesn’t often get done.

Speaking of SDP, the responsibility of infrastructure maintenance sits with the service provider in UK. As it is an overlay technology, its configuration is far more simple and neatly integrated with existing technologies. The access policies are build and applied based on the user’s identity in UK. Administrators can be precise about access depending on whether the end-user is sitting in the office or working remotely.

When you are dealing with VPN in UK, you know that latency and speed issues are its natural byproduct, and there are several reasons for that, including:

SDP doesn’t suffer from the same infrastructure limitations in UK as it doesn’t rely on appliances. As per the business demand, it can scale up and down while offering the same level of services in UK. To keep the latency to a minimum and retain the locality, the users are connected with the nearest service edge, unlike VPN that routes all the users to the data center.

Single Packet Authorization helps guarantee that users have a consistently good experience regardless of their connection type, whether that be office network, roaming on cellular, or Wi-Fi from home.

What are SDP and VPN?

Before we look into the difference, first, we understand what they really are.

The means to conceal your internet-connected infrastructure in a way that external parties and attackers can not see it in UK, whether it is hosted on-premises or in the cloud, is known as software-defined perimeter (SDP).

The purpose of this approach is to base the network perimeter on software instead of hardware. While the authorized users can still access the infrastructure, others will not see it from outside.

Implementing SDP allows organizations to restrict network access and provide customized, manageable, and secure access to networked systems. Access is completely based on the need-to-know model, which means each device must clear the verification process before being granted access to the network.

A VPN, or virtual private network, is a private network that encrypts and transmits data while traveling from one place to another on the internet. For encrypting your data, it uses multiple different encryption protocols and methods so that external parties and attackers can not intercept your data while it is traveling.

By using a VPN, not only will you surf the websites privately and securely but also overcome censorship by gaining access to unlimited restricted websites. Usually, VPNs have been utilized to secure and control access to company infrastructure. In some cases, an SDP can substitute a VPN.

You can read all about the Virtual Private Networks at: What is a VPN?

We decided to dip into the sea of Reddit and see what Reddit users have to say about SDP and VPN.

Reddit user “__GCHQ__,” who worked for a cybersecurity vendor, was found praising the SDP approach as it allows to login to everything with just the browser and a simple set of login details, hence increasing the visibility.

Reddit user “red_babun” was found preferring VPNs over SDP because not everyone can rearchitect all network infrastructures.

Upon a little bit of more surfing through Reddit, we found an almost equal number of votes against the two. In the end, it seems, it all comes down to your network infrastructure and requirement.

FAQs – Is SDP better than VPN in UK?

How does an SDP work in UK?

SDP allows access to users after verifying their identity and the state of their device. Once the user and device are authenticated, it sets up an individual network connection between the device and the server it is trying to access in UK. The user is provided access to their own network connection that no one else can access and possess the services that the user has approved access to.

How does a VPN work in UK?

A VPN masks your actual IP address in UK by redirecting it through a VPN server. After connecting to the VPN server, all your data travels through the encrypted VPN tunnels, and you can surf online with complete anonymity in UK. Your ISP or third-party entities can not track or steal your internet activity data. A VPN works like a filter that converts all your data into “gibberish.” Even if someone intercepts this day, they won’t be able to make any sense of it.

Why does SDP replace VPN?

Due to the following reasons, SDP is replacing VPN.

Is SDP better than VPN in UK? Whether it be VPN or SDP in UK, they should grow together to upgrade the access experience and fully leverage the remote workforce.Only 30% of companies can successfully capture any form of value from digital transformation. While they continue with different projects, the enter user experience needs to be considered. Only when the infrastructure has been modernized, the benefits of new technologies will be realized and avail at full potential.