How to Watch Love Island UK Season 9 from anywhere [ITV] 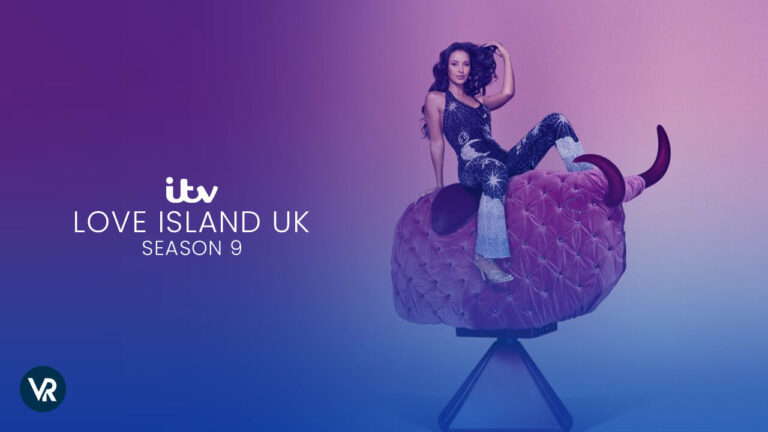 The reality competition series Love Island has spawned localized adaptations in 18 different countries. Unfortunately, Love Island UK is restricted to specific regions because of licensing issues. So for instance you may be wondering how to watch Love island UK 2023 from anywhere. It’s easy to get around this problem and watch Love Island UK Season 9 from outside the UK by utilizing a premium VPN.

You can easily watch the love island UK season 9 episodes you want by downloading a VPN and connecting to a server in a country where it is available. In addition to letting you access content normally blocked in your destination country, a VPN enhances your online safety by encrypting data.

Find out which Best VPNs work best and are available on the most widely used devices with the help of this guide. Keep reading to find out everything you have to know on where to watch Love Island UK 2023 and grab love by the horns.

With just a few simple steps, you can watch the Love Island ITV series online from anywhere:

Where can I Watch Love Island UK Season 9 from anywhere?

If you’ve been wondering where can I watch Season 9: Winter Love Island UK, you can put your worries aside. Love Island UK Season 9 will be available to watch on ITV2 and ITVX from January 16th onwards. You can also watch previous seasons of Love Island UK 2022 on it.

There you have it! You now know where to watch Love Island UK 2023.

When will Love Island UK Season 9 be Released on ITV2?

The first episode of the series will air on ITV2 in the UK on January 16, 2023. It will then become available on Hulu in the United States after it has been broadcast for a total of two weeks. Since the service is geo-restricted due to licensing restrictions you will have to use ExpressVPN to watch Season 9: Winter Love Island.

However ITVX is free to stream Love Island UK Season 9, You can either sign up for an ITV free trial of its “Premium” package or register a free (ad-supported) account. You can also find out the ITV subscription cost after completion of free trial period.

What is the Cast of Love Island UK Season 9?

Who are the Couples of Love Island UK Season 9 after Recoupling on Episode 11?

At the conclusion of episode 10, the Islanders are having a 90s party and everyone seems to be having a good time when they receive a text message announcing a remarriage. There are however two new Bombshells that appear before they couple up so wondering.

Who will couple up in Love Island Season 9 Episode 11?

Who Got Dumped so far on Love Island UK Season 9?

David, an Essex-based financial planner, had pledged to bring “nothing but good vibes” to the villa but was unluckily eliminated in the first round of the competition before he had a chance. The other dumped contestants are:

Where will Love Island UK Season 9 be filmed?

You wouldn’t be crazy for assuming that ski jackets and snow boots may replace bikinis and flip-flops for the winter season of Love Island UK.

However, the winter series will once again be held in Cape Town, South Africa, where January temperatures typically average 84 °F / 29 °C.

The winter season of Love Island, according to Executive Producer Mike Spencer, will take place in a “beautiful new villa.” 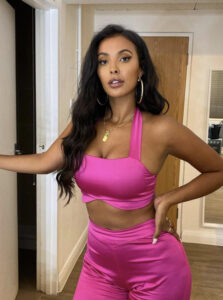 Love Island Season 9 will be hosted by Maya Jama in the latest upcoming season. Maya Jama takes over from Laura Whitmore, who stepped down from hosting this year. Are you excited as we are? Let’s see how well this season of Love Island UK turns out with Maya Jama.

Since the conclusion of Love Island UK season 8, when Laura Whitmore resigned from her role as host, there has been much conjecture regarding who will take over for her. Love Island UK new host Maya Jama has been the favorite for a very long time.

How many episodes are there in Love Island UK Season 9?

The number of episodes for Love Island UK Season 9 has not been disclosed by ITV, but you can count on it to air for eight weeks. There would be around 48 episodes of Love Island UK season 9 in 2023 since episodes of the show will air every day except Saturdays.

What is the Major Change Coming to Love Island UK Season 9?

According to the producer, the Love Island UK season 9 on the upcoming ninth season of Love Island UK will not be allowed to use their social media accounts during filming.

Is there a Trailer for Love Island UK Season 9?

The best VPN for viewing Love Island Season 9 from anywhere is ExpressVPN because of its accessibility to ITV and a wide range of global server locations.

Additionally, the super-fast connections guarantee that you won’t have any bothersome latency or buffering while watching Love Island UK Season 9 Episodes. 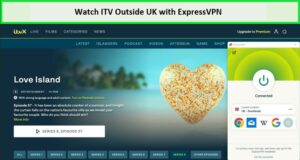 If you want to watch Love Island UK Season 9 on ITV abroad but can’t afford to pay for a subscription, ExpressVPN is your best and most reliable option. ExpressVPN’s unparalleled speed and ability to bypass geo-restrictions set it apart from the competition. ExpressVPN’s download speed on a 100 Mbps connection was 89.42 Mbps, and its upload speed was 84.64 Mbps.

We used a server in Docklands to watch ITV Shows outside of UK without any problems. Docklands and East London were the clear winners in our testing, so we’d recommend those as the best servers. We also tested the speed of other ExpressVPN servers and found that the Wembley server was the slowest.

MediaStreamer is a fantastic DNS tool included with ExpressVPN that will unlock region-locked content on the ITV Hub such as Prince Harry interview, Maternal, and Family Pile on ITV. ITV can be viewed online on non-Windows, non-Linux, and non-Mac devices outside the UK with the help of the MediaStreamer application. Also, it works with a wide variety of gadgets, including smartphones, smart TVs, and gaming consoles like the Xbox.

ExpressVPN has over 3000 servers in more than 94 different countries. It has 4 server locations within the UK, so you can watch amazing content like Vera Season 12 in high definition. If you are experiencing issues accessing ITV Hub while using a VPN, we recommend switching to a service like manchester.

On Which Other Platforms I Can Watch Love Island UK Season 9?

You may access Britbox, 9Now, ITV Hub, ITV Hub Plus, and Hulu to watch Love Island UK Season 9. The majority of Love Island UK streaming platforms have all of the show’s seasons available in their on-demand content libraries.

This suggests that by just connecting onto your account on ITV, ITV Hub Plus BritBox, or Hulu, you can access each episode that has ever been shown.

Is anyone from Love Island UK 2022 series 8 still together?

Another outstanding success for ITV2 was Love Island 2022. As soon as the competition is over and you’ve even collected the prize money, it becomes difficult to maintain your ties. These people have up until now remained faithful to their obligations:

Fans of the show have dubbed Tom Clare of Love Island as “dramatic” after he tossed his jacket to the ground after arguing with Zara Lackenby-Brown.

The female Islanders were quite upset with the 23-year-old footballer after Zara told Olivia Hawkins that Tom had secretly kissed new bombshell Ellie Spence despite having expressed interest in Olivia.

When Liv learned the truth, she was furious before confronting Tom and breaking down in tears. Ellie spoke with Tom about it as well, but she was unimpressed with his lackluster response as he kept saying, “I don’t know.”

Zara, Tom’s current lover, vented all of her rages. However, fans’ reaction was something really opposite they are saying we found the exact entertainment that was missing in the show :D.

tom throwing his jacket is still killing me 😭😭 HOW are u not embarrassed #loveisland #TALKSWITHASH pic.twitter.com/luMWQTqmJy

Where can I stream Love Island UK Season 9?

You will be able to stream Love Island UK Season 9 on ITV and ITV Hub.

How to watch Love Island UK Season 9 outside UK?

ITV Hub is the best way to stream Love Island UK from anywhere. However, you might need a VPN because ITV is a geo-restricted streaming service.

How can I watch Love Island UK season 9 without VPN?

If living abroad (outside of the UK) it won’t be possible to watch Love Island UK without a VPN due to due to licensing restrictions by ITV UK.

You can still catch up on the previous season’s results if you want to. So grab your popcorn and binge-watch the entire last season to learn who won Love Island 2022. Love Island UK’s runner-up couple, Gemma and Luca, recently confirmed their split, much to the disappointment of their fans.

The content of ITV and other similar services is geo-blocked if you are located outside the UK. If you’re living abroad and want to watch Love Island UK season 9 online, you’ll need a VPN. A service like ExpressVPN is a great choice.

Go on, grab love by the horns this season! Enjoy your streaming experience!