How to Watch FXNOW In New Zealand [Updated 2023]

Living anywhere in New Zealand and want to binge on Tyrant, Jumanji, or American Crime Story? Unfortunately, these popular content titles are only available on FXNOW, a VoD service restricted to the US. To watch it anywhere outside, you’d require a reliable VPN service like ExpressVPN.

FXNOW is a channel by the Walt Disney TV Network. However, its content is targeted towards adult streamers, with its content themes revolving around mature concepts. Moreover, the VoD service is set to compete with other infamous services, like Starz, HBO, and more.

However, the streaming service is restricted only to the US. Trying to access FXNOW from anywhere else would prompt you with a geo-restriction error that says:

“Thank you for your interest in FX Networks. The content you are trying to access is not available in your region.”

To bypass this geo-restriction error and enjoy FXNOW anywhere in New Zealand, you’d require a VPN. We tested 40+ VPNs with FXNOW, and ExpressVPN remained our top choice in most factors, considering its super-fast speeds, fantastic unblocking capabilities, and robust security.

How to Watch FXNOW in New Zealand (5 Easy Steps)

Follow these steps to stream FXNOW outside the United States:

Get FXNOW with ExpressVPN in New Zealand

Here are 3 VPNs that work with FXNow if you are located in New Zealand:

We tested 40+ VPNs on the basis of US servers, unblocking capabilities, speeds, multi-logins, etc. and shortlisted these 3 VPNs to stream FXNOW outside the United States:

1. The Best VPN to Watch FXNOW in New Zealand – ExpressVPN

ExpressVPN is the best VPN to watch FXNOW in New Zealand. This VPN has a proven track record of sidestepping geo-restrictions on streaming platforms all around the globe.

ExpressVPN consists of 3000+ servers with multiple US servers in 25 different locations, including New York, San Francisco, and Denver. We connected to its Chicago server and unblocked FXNOW within 3 minutes. 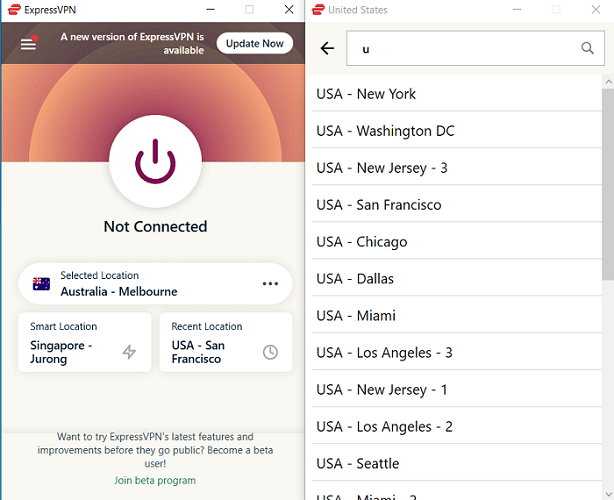 With these servers, you can stream FXNOW anywhere in the world without receiving any error messages or long buffering times. We tried streaming Jumaji using this VPN and were able to enjoy it in HD quality easily.

As for speeds, we tested ExpressVPN’s Chicago server, and it delivered an average speed of 86.18 Mbps on our 100 Mbps connection.

ExpressVPN is compatible with all popular devices such as Android, macOS, FireStick, Windows, and more. We set up ExpressVPN on an iPhone, and it worked just fine. We also tried using ExpressVPN on Samsung Smart TV and enjoyed FXNOW on a bigger screen.

Get ExpressVPN for FXNOW in New Zealand

Surfshark is one budget-friendly VPN to watch FXNOW in New Zealand. Even though it’s a cheap VPN, it offers reliable service to its users.

Surfshark offers 3200+ servers worldwide. Out of these, 600+ servers are present in US, located in Miami, Detroit, Buffalo, and more. We connected to its Atlanta server and unblocked FXNOW within 5 minutes. 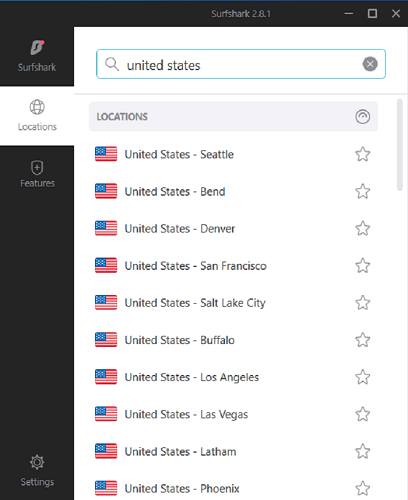 Surfshark has a fast network with minimal downtime or server congestion problems to ensure a buffer and error-free streaming experience for loyal subscribers of FXNOW outside the country. We tried streaming The Bridge using this VPN and could enjoy it easily in HD.

We tested Surfshark for speeds, and on our 100 Mbps connection, it delivered us an average speed of 84.34 Mbps.

Get Surfshark for FXNOW in New Zealand

NordVPN is a reliable VPN to watch FXNOW in New Zealand. We tested NordVPN for speeds on its US servers, and they delivered blazing-fast speeds on all.

This VPN offers 5500+ servers worldwide, with 1970+ servers in the United States. We connected to its Denver server, and it unblocked the streaming service within 2 minutes. 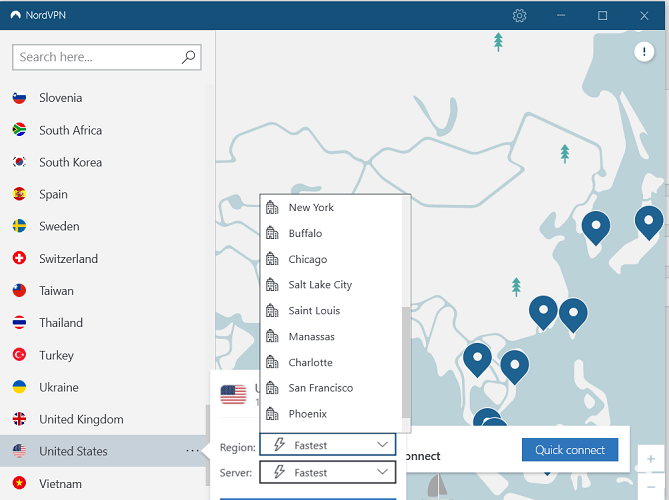 Connecting to this server assigned us a US IP address, while the fast speed and stable connectivity ensured a smooth and seamless streaming experience on FXNOW. We tried streaming It’s Always Sunny in Philadelphia with NordVPN and received a stable connection and HD quality.

As for speeds, testing NordVPN’s Denver server delivered us an average speed of 83.48 Mbps on our 100 Mbps connection.

NordVPN is compatible with multiple devices, including Android, iOS, Windows, FireStick, Smart TVs, and more. We set up NordVPN on a router, and it worked just fine on all our devices.

With speeds like these, NordVPN is undoubtedly the fastest VPN in the industry. Along with that, it also offers 6 multi-logins and a 30-day refund policy at a price of NZ$ 5.43/mo (US$ 3.49/mo) (Get 57% Off + 3 Months FREE on 2-Year Plan). To know more about this VPN, read our in-depth NordVPN review in New Zealand.

Get NordVPN for FXNOW in New Zealand

How to Sign Up for FXNOW in New Zealand?

To get FXNOW in New Zealand, you’d have to subscribe to any streaming service that offers the channel in their bundle. Let’s look at a few:

You can get a fuboTV subscription to access FXNOW in your country. This streaming service offers around 200 channels to users, including FXNOW.

You can unblock it first by using the best VPN for YouTube TV. then Access 100+ channels. YouTube TV also offers approximately 100+ channels to users. You can subscribe to this service and get FXNOW along with much more.

If you want a variety of TV shows and on-demand Hulu content, you can easily subscribe to this plan and 75+ channels, including FXNOW in New Zealand.

The last option to access FXNOW is Sling TV. However, it’s only available on Sling TV’s Blue plan to users. On this plan, you can access Sling TV on 3 devices simultaneously.

Can I Use a Free VPN to Watch FXNOW in New Zealand?

You can use a free VPN to watch FXNOW in New Zealand, but we suggest you don’t do that. Free VPNs come with limited servers, slow speeds, poor unblocking capabilities that all combine and offer you a bad streaming experience.

Free VPNs offer just a few servers worldwide, leading to traffic overload, which results in bad speed on the connection. This way, it often becomes impossible for you to stream FXNOW.

Furthermore, few free VPNs are known to leak user data and sell it to third parties, which is quite risky if you ask us. This is why we recommend you use a premium VPN service like ExpressVPN to unblock FXNOW in New Zealand.

There is an array of platforms that support FXNOW:

Here are a few popular movies and TV shows that you can enjoy on FXNOW outside the United States:

How to watch FXNOW without cable in New Zealand

You can watch FXNOW without cable by simply using over-the-top TV services that offer FX Network. Some of the cord-cutting options that offer FXNOW include:

Can I watch FX on Amazon Fire Stick in New Zealand?

Yes, there is a dedicated FXNOW app for the Amazon Fire Stick, which you can use to watch FX.

Can you watch full episodes on FXNow in New Zealand?

Yes, you can watch full episodes on the FXNOW app and desktop browsers.

FXNOW is an excellent free streaming service for subscribers of FX Network, offering a decent variety of popular movies and TV shows.

Thankfully, fans of FXNOW in New Zealand can also gain access to this service using VPNs having servers in the US. Out of all the VPNs we tested, our top choice is ExpressVPN.

This VPN offers multiple US servers, great unblocking capabilities to unblock FXNOW, and super-fast speeds. Along with that, it also offers a 3-month free subscription on its annual plan, so you get the VPN for 15 months straight while paying for just 12 months.