Yoga VPN is absolutely free but is only available for Android and iOS users. It doesn’t have a website and can only be found in Play Store and iTunes Store.

It is a product of LANPIPER PTE.LTD. The parent company has proudly created another VPN service by the name of Melon VPN before.

This VPN doesn’t specify which encryption it uses to protect users’ data nor does it have good server speed.

Despite this fact, it has a good customer base with over 10+ Million downloads in Play Store alone.

Read our Yoga VPN review in UK to know more. Therefore, we highly recommend reading our blog to learn more about these best VPNs.

If you wish to check out other VPNs that are free, please check out our list of best free VPN services.

Below is the list of factors that I will be using to perform a Yoga VPN review:

Pricing – How much does Yoga VPN cost in UK?

Yoga VPN is a free VPN service. They have divided their service into three main types and these are: 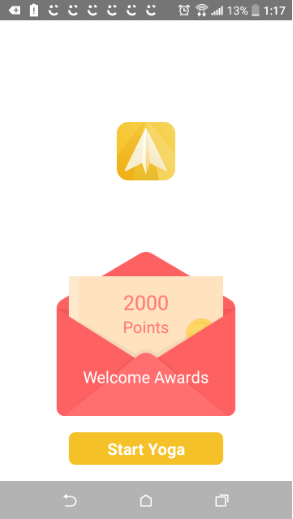 In reality, you have to earn points in order to continue using the service in UK. You can get them by watching specific videos, inviting friends, and so on. 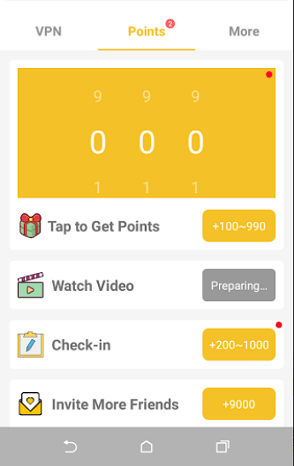 However, being a free VPN makes it prone to certain limitations. To avoid these limitations, check out our list of VPN deals and get a premium VPN at affordable rates!

According to this Yoga VPN review in UK 2022, the service does not provide any information regarding tunneling protocols and encryption.

If a VPN does not have such information to share with its users, it creates a highly negative impression about its reputation. I expect that Yoga VPN will not spoil its credibility over non-disclosure of tunneling protocols and other privacy features.

Jurisdiction –Is it located in a 5-eyes country?

Yoga VPN is based in Singapore as per this Yoga VPN review.

The country is not a part of 5 eyes, 9 eyes, and 14 eyes countries. Still, it coordinates with eyes countries in exchanging intelligence sharing information.

Similarly, you have every right to inquire about those VPNs that belong to five eyes, nine eyes, and 14 eyes territory.

This way, you would know about the consequences of using such VPNs that hail from these countries.

I was impressed to know that Yoga VPN does offer 1000+ proxy servers in 30+ regions globally. The service has categorized its servers into three main levels.

These are level 1, level 2, and level 3 too. You can find different servers in these levels such as basic, stable, and fastest servers. 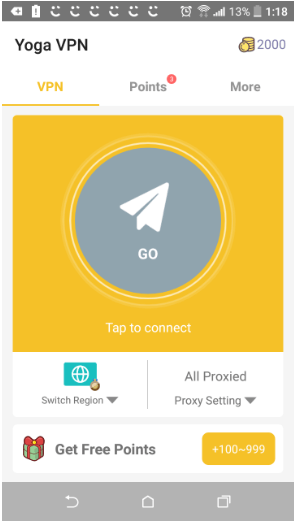 During this Yoga free VPN review, the process of server connection was simple and extremely fast.

I did not encounter any hassle while connecting to my preferred server at all. 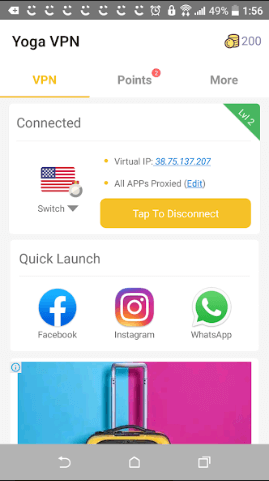 Speed – How fast is Yoga VPN?

The speed of the Yoga VPN service is average, but it isn’t bad. I connected to their German server to test its speed in UK.

Before connecting, my internet speed was 33 Mbps. After connecting, it went down to 14.54 Mbps. Here is the test result: 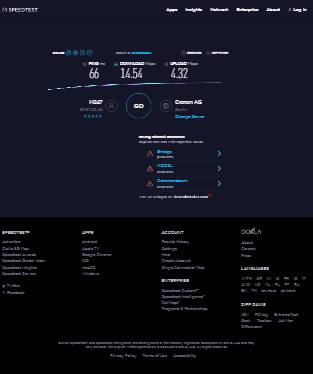 Streaming –Does it work with Netflix in UK?

Unfortunately, it does not work with Netflix in UK. Even though it has 1,000 servers, a free VPN rarely unblocks US Netflix because millions of users have access to its shared IP address.

If anyone’s IP address is blacklisted, you won’t be able to access Netflix with that IP. So, the chances become very slim.

It does not offer any insight into torrenting support in UK whatsoever. The service is a freemium one. Hence, you cannot ask for different features.

You can refer to our guide that explains some of the best VPNs for torrenting in UK. This VPN doesn’t work on Kodi in Windows since it doesn’t have a Kodi Windows app. However, it works perfectly fine on Android.

It prevents geo-restriction of Live TV videos on Kodi. There is a list of a few VPN Kodi Android that works best with Kodi.

Yoga VPN easily passed the leak test. I connected to their US server in UK and I did not find any leaks.  Here are the test results: 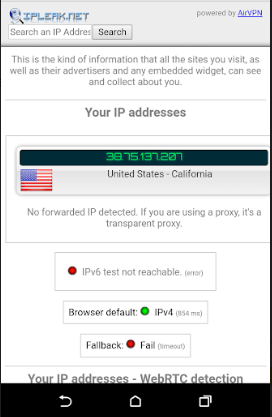 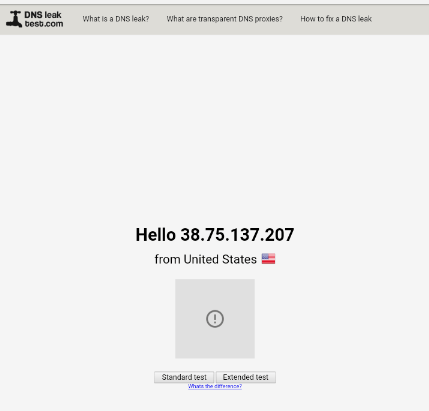 Note: I conducted both tests after connecting to the US server.

In order to know about different kinds of leakages, read our exclusive VPN leak test guide.

Yoga VPN clearly states on their privacy policy that they keep logs. Although they do not store personal information, they know what you are searching for on the web browser. 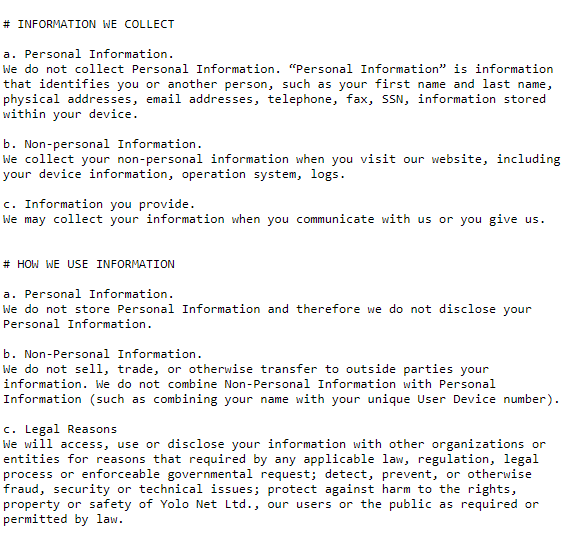 If you want to know about the logging policies of other VPNs, read this informative resource.

This Yoga VPN review in UK reveals that the service is compatible with only mobile platforms i.e. Android and iOS.

It means you cannot consider using the brand for other operating systems like Windows, Mac, and Linux. It is a mobile VPN service in fact. 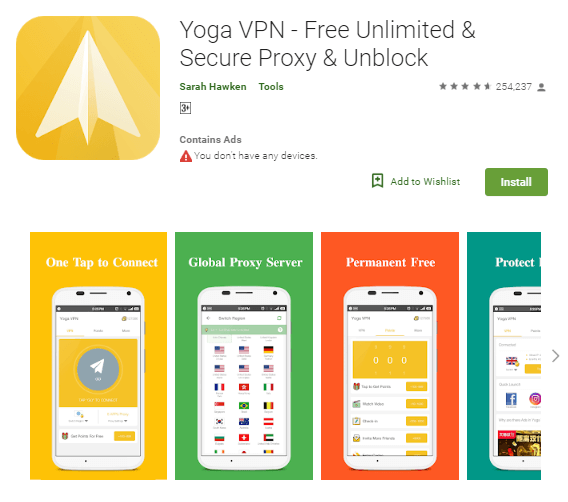 If you review Yoga VPN thoroughly, you will find that you cannot use Yoga VPN for PC in UK.

When it comes to using its support section, you will not find numerous options sadly. There is no website, but only its Facebook Page and Email. Their email is yogavpn.feedback@gmail.com.

That said Yoga VPN still has a long way to cover, as they are unable to grab the attention of potential users due to its pathetic customer support function.

Here is a quick comparison between the two service providers based on their features and price in UK. Let’s have a look at the table:

ExpressVPN is the best VPN and will stand out any day in terms of speed, security, features, accessibility, and performance in UK. You can read detailed ExpressVPN Review. Plus, it comes with a risk-free 30-day money-back guarantee with 3-months free subscription on its annual subscription.

You can read reviews about other VPNs if you did not like Yoga VPN:

Based on the above the Yoga VPN review in UK, I do not recommend using Yoga VPN.

This VPN has so many limitations. It is available for only Android and iOS devices. More importantly, it keeps your logs which is something users do not admire.

It doesn’t have a website so you cannot confirm if it has decent encryption that would keep your data private. The speed is average and doesn’t unblock US Netflix, so overall this VPN isn’t recommended.

If you want to read comprehensive reviews about other best VPNs, read our dedicated VPN reviews page.