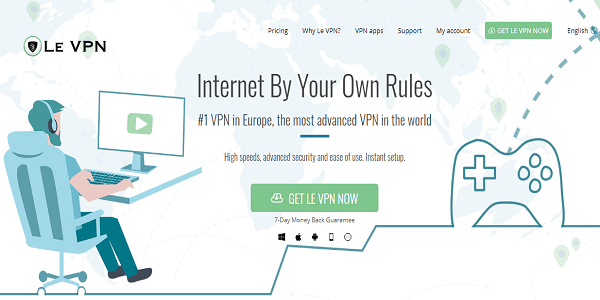 Le VPN was initially based in France but then shifted to Hong Kong to avoid falling under 9 eyes country jurisdiction.

Its servers are fast and easily unblock US Netflix in UK, to my surprise, but it does not keep track of your logs in UK.

All of its security features are spot on like they use AES-256 cipher and all-important tunneling protocols (OpenVPN, PPTP, & L2TP).

Its price is a bit expensive, but who cares when you can get your online privacy restored?

If price is your fear factor, then you can try either ExpressVPN or Surfshark which offers the same features as Le VPN but at an affordable price in UK.

I rated Le VPN on my 9-step rating criteria listed below:

Jurisdiction – Where is Le VPN based?

Le VPN is based in Hong Kong, a safe country since it doesn’t fall under 5 eyes, 9 eyes, or 14 eyes country.

If it were in the 14 eyes country, it would have shared users’ data with authorities. This law does not bind companies within Hong Kong, so your personal information with Le VPN remains safe.

Even though law enforcement did ask for your information, that leads you to be a suspect; Le VPN still won’t reveal your information but will suspend your account in UK. You can read about this more in the Privacy Policy section below.

Security – Is Le VPN safe to use?

Le VPN is safe to use in UK because it uses a good AES-256 cipher, one of the strongest cryptographic standards available today in UK.

Le VPN does not provide a wide range of VPN protocols to use in UK. It is limited to 5 protocols, i.e., OpenVPN, PPTP, IKEv2, IPSec, L2TP, and HybridVPN. However, it does offer the most secure and fastest tunneling protocol in existence: OpenVPN.

Le VPN offers a Smart DNS service as well with DNS servers from 9 different countries. Smart DNS can come in handy if you want to unblock streaming services like Hulu, BBC iPlayer, and channels such as ABC, CBC, and France2 in UK.

Smart DNS is not as a security feature as a VPN. Its main utility lies in its speed. If you need fast streaming, turn on the Smart DNS.

HybridVPN is a unique feature of Le VPN, basically a combination of VPN and Smart DNS technologies. You can easily bypass restrictions on US, UK, and French channels and stream your favorite content.

Le VPN keeps connection logs but does not keep usage logs in UK. Le VPN’s privacy and policy are found under ‘Terms of Use. In their policy, they clearly state that they store the following information:

But they also reflect in their policy statement that:

You may also correct, update, or delete your personal information by making the change on your account page.

So, there’s an improvement. Overall, its logging policy seems good enough. Collecting your original IP address seems critical; if they can improve, that would be great.

Reading this piece of information had my trust in this VPN service:

If law enforcement pays a visit to Le VPN headquarters and asks for your information, they may suspend your account for suspicious activities. However, still, they would not reveal your information. That’s something to applaud.

When tested for any leaks in this review in UK, it passed all the tests. There were no leaks found, which is good news. I connected to the same France server that I used to test its speed. The results are presented below: 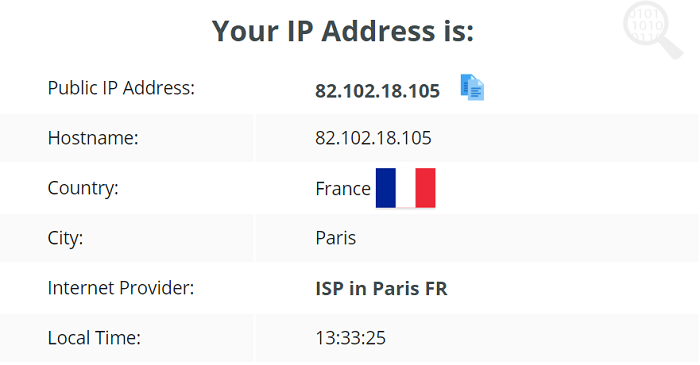 I also checked for any viruses in their Windows client. Gladly, I did not find any virus or malware that could harm your device. Here is the screenshot of the virus test for Le VPN:

I found out in this review that their servers are located in 120+ countries including 3 locations in UK. That’s a lot of countries and servers.

Does Le VPN work in China?

Yes, Le VPN works in China. They also have obfuscated servers that tend to unblock websites present in China, Russia, and UAE, where there are tough internet restrictions.

Speed – How Fast is Le VPN?

Their server speed is good enough for fast streaming in UK. I connected to its US server to check for its speed.

Before I connected to Le VPN, my internet speed was 30 Mbps. But as I connected to its France sever, my speed slightly dropped to 22.96 Mbps. Here is the snapshot of the speed test:

A decline in speed by only 24% was recorded.

I also tested Le VPN on the UK server. Here are the results:

The speed declined by 36%, which is also fairly reasonable.

I also tested Le VPN on the Australia server. Here are the results:

The speed declined by 42%, which is just about average.

Streaming –Does Le VPN work with Netflix in UK?

Le VPN does work well with US Netflix in UK. It was easier to unblock Netflix than I would have thought. At the same time, reviewing different VPNs, I usually have to connect multiple US servers before I actually get Netflix to work in UK.

While testing it for Le VPN, I got Netflix to work in a single stroke. I wanted to watch Infinity War on Netflix, but it was only available on the US Netflix library.

I connected to Le VPN US server, and it worked perfectly…

Then, I tested Le VPN on BBC iPlayer, and no wonder it easily unblocked iPlayer for good… 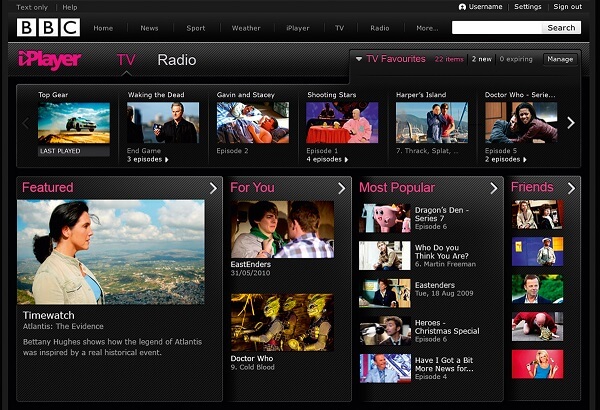 I learned in this review that it works with all major platforms and devices in UK. You can download its native app/client for Windows, macOS, iOS, and Android devices.

However, it can be manually set up on some devices it doesn’t currently have an app for. These include Linux, Chromebook, and some DD-WRT routers.

The Support page of Le VPN offers instructions for these setups as well. With a single Le VPN account, you can connect 5 devices simultaneously in UK.

Le VPN Windows app is the best of them all. It has an easy-to-use interface and easy-to-install as it takes only a minute to set up on your desktop or laptop. 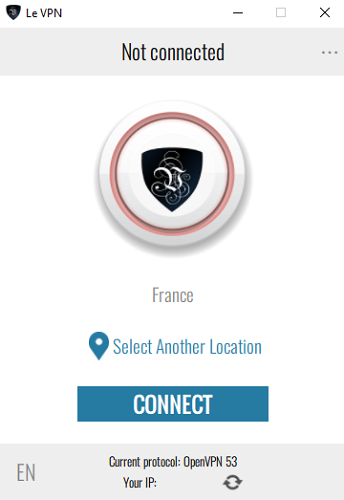 The Le VPN Mac app is similar to its Windows app. You can choose locations on the top-right corner of the app or directly choose it from the front. 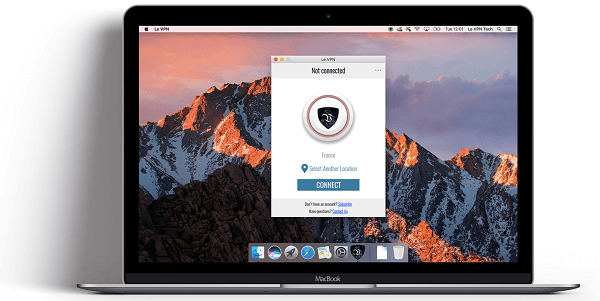 The android app is not so user-friendly. When you open the app, you can see location servers right at the front. You can also select the Settings tab on the top-left corner to change protocols.

Its iOS is much smoother than the Android app. It also loads very fast on my iPad, and it takes almost a few seconds to connect to any server location. 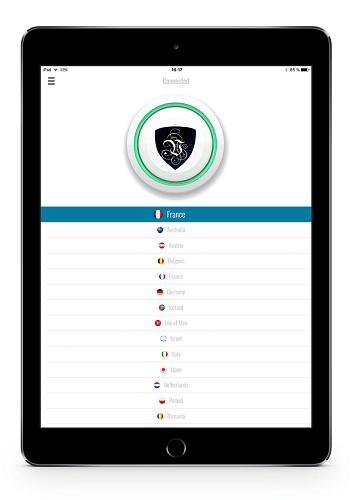 Pricing – How much does Le VPN cost in UK?

Le VPN is quite expensive in UK when it comes to its pricing plan. It offers 3 different plans. These are listed below:

Le VPN specifies in its Terms of Use that it holds the right to change the pricing at any time, but it won’t affect users who are already under a subscription until it expires.

ExpressVPN or Surfshark offers more or less similar features but at a better and more affordable price than you need to check out now.

It has a 7-days money-back guarantee in UK which is comparatively a shorter time to explore its features. Learn more about how Le VPN compares with other providers in our VPN cost article.

As far as payment methods go, you can buy Le VPN with the below-listed modes:

It’s great that Le VPN accepts bitcoins because anonymous payments are a great way to maintain your privacy on the web further.

Le VPN has an excellent rating on Trustpilot in UK. It manages to score 4.8 stars out of 5.0 based on 279 user reviews. If you see it in the image below, you will find that 90% of its reviews are Excellent. Only a handful of people have marked it Bad.

Here are a few reviews by Reddit users. Let’s hear what they have to say about Le VPN and its performance:

One user says that Le VPN speed is a good aspect of its performance. He also mentions that it has an easy-to-use interface and really easy to connect to different server locations.

Another user mentions that he had a good experience with this French VPN.

Le VPN offers support over Live Chat, Tickets, and Email Support, which is almost always available. The response rate is pretty quick, as they immediately replied to my query when I was testing the service for this Le VPN review in UK. 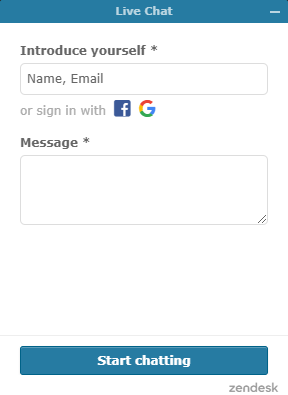 The support page of Le VPN offers instructions for setting it up on devices and operating systems it supports in UK.

There is also an FAQ section within each instruction page for additional details. All in all, the customer support of Le VPN deserves more praise than criticism.

You can also contact their support team via email at marketing@vtnv-solutions.com.

Comparison between Le VPN and ExpressVPN in UK

Here is a table of comparisons between the two service providers based on features and their pricing. You decide which one is better in UK:

Alternatives to Le VPN in UK

Le VPN faces strong competition from other providers in UK. Here are a few alternatives that are capable enough to give Le VPN a run for its money.

Do I Recommend Le VPN in UK?

Yes, I definitely recommend Le VPN in UK. The VPN has the fastest servers, unblocks US Netflix, and doesn’t keep usage logs in UK. These are the factors that attract me the most. You can bypass censorship with a VPN in Hong Kong.

It also uses good AES-256 cipher encryption that keeps your traffic protected under an encrypted tunnel in UK.

It comes at a high price, but it doesn’t really matter when it offers such exciting features. All-in-all it is a good VPN to buy. Hope this Le VPN review in UK is helpful to you.

You can check out more unbiased VPN reviews from this guide as well.