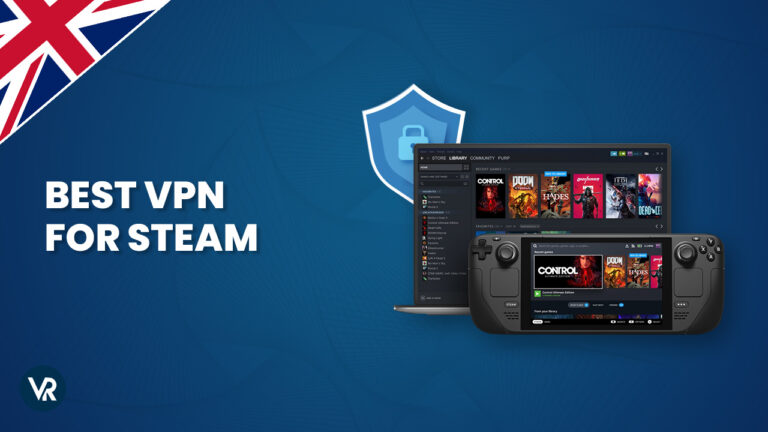 Steam is arguably one of the most popular hub for purchasing, downloading, and playing graphic-intensive games. But with that, it’s also geo-restricted in a lot of countries, workplaces, and schools. That’s why using a best vpn for Steam in UK is necessary.

Along with not being able to play all games without restrictions, you cannot even redeem game gifts if you live in a country where there are geographical restrictions on that game unless you use a VPN. A VPN for Steam helps you bypass geo-blocks and allows you to access your favourite games from anywhere.

So on that note, I have compiled a list of a few awesome VPNs that you can use to get past Steam’s rather annoying restrictions in UK.

Quick Overview – The best VPN for Steam In UK 2022

Get ExpressVPN For Steam in UK

While there are many VPN services in the market, not all of them can help you spoof your IP to access geo-blocked games in UK.

So after painstakingly filtering out tons of VPNs, I have managed to compile a list of the best Steam compatible VPNs in UK  below:

If you want a VPN that’s blazing fast and don’t mind paying a premium, ExpressVPN is perfect for you. With over 3000+ servers in 94 countries including 4 servers in UK, you can literally bypass anything and everything. It is one of the fastest VPNs on the market, making it a top choice for streaming. According to our testing, ExpressVPN offered great speeds. At a connection of 100 Mbps, it offered 86.18 Mbps download speed on its UK server.

It allows addition, it users to stream their favorite shows and movies on big screens that don’t have native support for VPNs like Smart TVs, Apple TV, Amazon Fire TV, and more. Moreover, it also offers a kill switch feature named network lock to offer additional protection in case of network drops.

In addition, ExpressVPN is capable of delivering extremely low pings. So if you’re not a fan of lag in your games, ExpressVPN has you covered in UK. Moreover, it also allows 5 simultaneous connections at once and hides all your IP addresses like a pro.

But all this performance comes at a price. Let me be real with you, ExpressVPN is quite expensive. At a monthly subscription fee of GB£5.4/mo (US$ 6.67/mo) (Get 49% Off + 3 Months FREE on its 12-Month Plan), ExpressVPN is significantly more expensive than other VPN providers. But they also offer a 30-day money-back guarantee so you can test it for a month.

Nonetheless, ExpressVPN is totally worth the extra premium.

For more information about this VPN in UK, read our ExpressVPN review.

Pros
Cons
Get ExpressVPN For Steam in UK

If you don’t have the budget for ExpressVPN, you can definitely consider Surfshark. It is a relatively new VPN, but with features wise, it is pretty strong. Right from the get-go, Surfshark offers 3200+ servers in 100 countries including 4 servers in UK, which is perfect for unblocking geo-blocked gaming content and other services in UK.

Not only that, but Surfshark is also surprisingly fast. Even though Surfshark’s server count might be small, you can expect pretty awesome gaming and downloading speeds. It’s also quite effective in bypassing restrictions on game content, allowing you to have an unrestricted gaming experience in UK.

Also, to read more about VPNs made for gaming purposes, check out our list of best VPNs for gaming.

Coming back to it, perhaps the best thing about Surfshark is its price. For the cheapest plan, Surfshark only costs GB£1.66/mo (US$ 2.05/mo) (Get 84% + 2 Months FREE on 2-Year Plan) making it the best cheap VPN in UK. More impressively, Surfshark offers unlimited simultaneous connections and is covered by a full 30-day refund.

For more information about this VPN, read our Surfshark review.

Pros
Cons
Get Surfshark For Steam in UK

Lastly, we have NordVPN. This is a Panama-based VPN service with5500+ servers in 59 countries including 440+ servers in UK. If you don’t know, more servers mean better overall performance.

Speaking of which, thanks to NordVPN’s massive server count, you can expect solid gaming speeds in UK. Not only that, but NordVPN also offers DDoS protection specifically geared towards gamers in mind. Its privacy features also include a strong kill switch feature which adds to its already strong military-grade security.

Despite all the wealth of amazing features, NordVPN is very modestly priced. For its cheapest plan, you’ll only have to pay GB£2.82/mo (US$ 3.49/mo) (Get 57% Off + 3 Months FREE on 2-Year Plan). Even more impressively, NordVPN is covered by a full 30-day refund policy.

For more information about this VPN, read our NordVPN review.

Pros
Cons
Get NordVPN For Steam in UK

IPVanish is a great Steam VPN service available in the market today. Its special features for gaming like kill switch, DDOS protection, and a huge range of servers make it one of the best Steam VPN in UK 2022.

Aside from servers, IPVanish is also super fast. Now I’m not going to lie, a lot of their servers can be slow at times. However, their US servers are actually surprisingly fast.

So whether you plan on playing games online, downloading them on your PC or Mac, or using its browser extension, you should have no trouble with IPVanish in UK.

For more information about this VPN, read our IPVanish review.

Pros
Cons
Get IPVanish For Steam in UK

Last but not least, we have CyberGhost in UK. It is a pretty lowkey VPN service with over 9700+ servers in 91 countries. This VPN service is pretty inexpensive but still manages to offer rock-solid performance.

Price-wise CyberGhost is pretty affordable and only costs GB£1.64/mo (US$ 2.03/mo) . Unlike other VPNs in this list, CyberGhost offers an extensive 45-day money-back guarantee, a strict no-logs policy, and amazing customer support.

For more information about this VPN, read our CyberGhost review.

Pros
Cons
Get CyberGhost For Steam in UK

Next up, we have a super-secure and affordable VPN service by the name of PIA. PIA is a reliable VPN for Steam in UK that offers over 35000+ servers in 84 countries including 100 servers in UK.

Not only that, but PIA also offers decent speeds and pings that won’t affect your gaming performance when playing online in UK. Aside from that, PIA offers tons of features like IP leak protection, split tunneling, and a kill switch to keep you protected while you play all your favorite steam titles in UK.

For more information about this VPN, read our PIA review.

Pros
Cons
Get PIA For Steam in UK

Should you use Free VPNs for Steam In UK?

To cut to the chase, you should definitely avoid using free VPNs for Steam in UK. Since free VPNs offer only limited servers, you’re going to experience slow and sluggish speeds.

Not only that, free VPNs usually offer limited bandwidths. Since Steam games consume a lot of bandwidth, a 1 Gb monthly data limit is not sufficient.

See Also: Read our list of best-discounted VPNs to get amazing deals and up to 3 months of free usage.

Why Use a VPN with Steam In UK?

As I mentioned earlier, there are two main reasons why you’ll need a VPN for Steam games in UK. The first has to do with bypassing firewalls blocking Steam, and the other has to do with potentially purchasing games from other regions in UK.

On a lighter note, as long as you’re not faking your billing address, you can purchase games from other regions as well.

You’ll have to be pretty consistent with using the same server every time for purchasing games to avoid being caught violating steam VPN rules.

How to set up a VPN on Steam in UK?

When it comes to setting up a VPN with Steam in UK, you really shouldn’t take any chances. Since steam can actually detect if you’re using a VPN, compromising on proper setup or using free VPNs can cost your Steam account. This is why you should use dedicated IPs instead of shared IPs and connect to proper servers to avoid bans in UK.

Here’s how to properly set up a VPN on Steam in UK:

Region-wise Availability of Games in Steam

Steam offers a large catalog of fantastic video games. However, some video games are only available in certain regions.

If you want to play these games restricted in UK, you will have to access Steam through an IP where the game is available.

This can be done quite easily through a VPN. When you connect to a server from a different country through a VPN, you will be able to access all geo-restricted content from that country, bypassing the steam region lock.

That said, it is not recommended to purchase games from other regions. In fact, it is a major no, no according to Steam’s Subscriber Agreement.

Will I face Steam Ban For Using VPN In UK?

Well, that depends. If you plan on spoofing your location to purchase games for cheap, you will definitely get banned due to rigid regulations and licensing restriction issues.

However, if you’re using a VPN to bypass firewalls or to speed up your internet speeds, perhaps, you should have nothing to worry about.

In fact, according to the response of one steam support representative, “Playing games or operating Steam while using a VPN is not strictly prohibited.”

According to SSA guidelines, you should not use a VPN or proxy service to change your location with the intent to buy games for cheap.

If you’re caught violating Steam’s terms and conditions, your profile will definitely get banned.

Also, check best VPN reviews on Reddit as recommended by the Redditors’ community.

Steam VPN is not working in UK!

If you are unable to get a VPN to work with Steam in UK, try the following actions:

How do I change store on steam in UK?

You must also change your billing address to correspond to the new region you have selected. Also, don’t change your region quite frequently. Otherwise, your account might be put on temporary cool down.

Wrapping Up – Best VPN For Steam In UK

The best VPN for Steam in UK VPN has multiple benefits. For example, you can pass firewalls blocking Steam, you can avoid ISP throttling, and you can even purchase games from other regions in UK.

That said, as I’ve mentioned again, purchasing games from other regions can be risky. Nonetheless, it’s totally doable.

If you don’t change your Steam region frequently and fake your billing address, you’ll have no trouble purchasing or playing games from other regions. Just make sure you don’t use a free VPN for steam in UK.

On a side note, if you want a VPN aside for playing games on Steam in UK, you can check out our list of best VPNs.