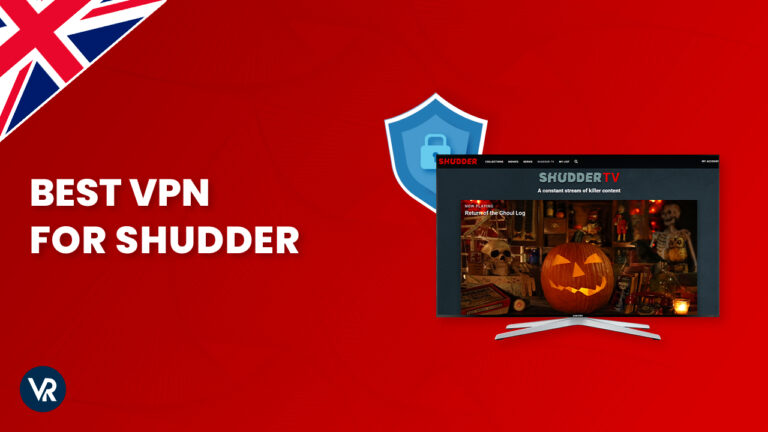 Are you a big fan of horror movies? Shudder is a streaming site featuring horror, suspense, and thriller movies. Unfortunately, like other streaming sites, geo-restrictions are nothing new to Shudder.

Despite having a huge viewership worldwide, Shudder only works in the US, UK, Canada, and Ireland. This means you’d require a reliable VPN to get a UK IP address for accessing horror movies from abroad.

A VPN will mask your IP address by connecting you to the server in the country where Shudder is available. Moreover, the best VPN for Shudder outside UK will provide additional security and privacy while streaming or downloading.

However, all VPNs are unequal; many don’t work well with bypassing geo-restrictions, and some are not good at protecting your online security. To help you find the best VPN for Shudder, we tested dozens of VPNs in the market and narrowed down the list of the best ones.

The Best VPN for Shudder outside UK: Quick Overview

Are you in a hurry? Just check our quickest overview of the best VPN for Shudder at a glance.

Why do you need a VPN for Shudder outside UK?

You need a VPN for Shudder because it is geo-restricted and cannot be accessed outside of its service areas. Shudder uses special IP-detecting systems to determine your location. This means you can’t access Shudder while traveling abroad or if they reside outside the US, UK, Canada, and Ireland unless your IP address is registered in one of these countries.

This is where a VPN comes in handy. The best VPN for Shudder can quickly circumvent many limitations, from bypassing ISP throttling to unblocking geo-restricted content.

Along with bypassing geo-restrictions, a VPN will protect your privacy and keep your data safe if you travel abroad. We recommend using ExpressVPN with an extensive server network to stream your favorite movies on Shudder without internet connectivity and seed issues.

How to use a VPN for Shudder?

Using the best VPN for Shudder is not a difficult matter. You can easily install it and watch your favorite movies on Shudder. Here is the step-by-step process on how to use a VPN for Shudder:

After testing 25+ VPNs based on their streaming abilities, unblocking power, and security, we’ve finally come across the top 3 VPNs that deserve to be the best VPN for Shudder.

Legs dig in further to learn more about them:

ExpressVPN is the best VPN for Shudder outside UK, with lightning-fast speed so that you can stream movies and shows without interruption. It offers 3000+ servers in 94 countries with 4 server locations in UK, making it unbeatable for streaming fans.

In our testing, we connected to ExpressVPN’s East London server, and we could instantly access Shudder. It performed well in reducing lag and provided us with a buffer-free experience while streaming Creepshow. 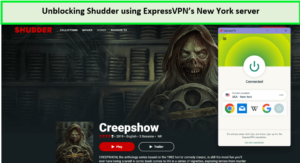 Using ExpressVPN servers, we could bypass Shudder’s geo-restrictions within seconds.

Besides Shudder, ExpressVPN lets you access many popular streaming sites such as BBC iPlayer, HBO, Hotstar, Apex Legends outside UK, ITV, Sony Liv, CBS, Netflix, and Food Network. It is the best VPN for YTV UK.

We were surprised with ExpressVPN’s speed test results as they were perfect for streaming on Shudder. On our connection of 100 Mbps, we received a download speed of 89.42 Mbps and an upload speed of 84.64 Mbps.

ExpressVPN is compatible with every operating system and all major devices, including Android, iOS, Router, PS4, Xbox, Chromebook, Windows, Mac, Roku, and Smart TVs. We had a terrific time using ExpressVPN on Firestick. Plus, you can connect up to five devices simultaneously on a single connection.

Moreover, it comes with a Media Streamer feature allowing you to stream HD-quality content on devices that do not support a VPN. ExpressVPN has a suite of security features that ensure you are securely surfing the web.

It provides military-grade encryption, DNS leak protection, and a kill switch. Its no-logs policy ensures your sensitive information is safe and secure. You can try out ExpressVPN’s free trial in UK to test all these cool features.

Learn more about its benefits at our ExpressVPN review UK.

Surfshark is the most budget-friendly VPN for Shudder as it costs just GB£ 1.66/mo (US$ 2.05/mo) (Get 84% + 2 Months FREE on 2-Year Plan). It has around 3200+ servers in 100 countries, including 4 locations in the UK. All its servers are super fast, and you can stream movies on Shudder without delays and buffering issues.

We connected to Surfshark’s London server to check its unblocking abilities, and we could access Shudder within seconds. We binged watched our favorite movie, Mad God without lags. 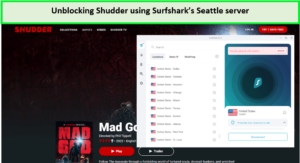 Unblocking Shudder using Surfshark servers was a piece of cake!

Surfshark works amazingly with all other streaming sites, including Amazon Prime, BBC iPlayer, Netflix, Hulu, HBO, Disney, and Showtime outside US and CBS in UK.

We ran a speed test for Surfshark, and on our connection of 100 Mbps, we observed a download speed of 81.32 Mbps and an upload speed of 76.12 Mbps.

The best thing about Surfshark is that it offers unlimited simultaneous connection on a single subscription account. It supports all operating systems and devices, including Android, OS X, Linux, Firestick, Smart TVs, Mac, iOS, and Windows. We could easily set up Surfshark on Apple TV to stream Shudder movies onto the big screen.

We are impressed with Surfsharks Camouflage mode that masks the fact of using a VPN. It also offers a P2P sharing feature and a DoubleVPN option. Furthermore, Surfshark comes with a strict no-logs policy to ensure none of your data is logged, and there are no chances of someone stealing it. It offers 256-bit encryption, kill switch, and DNS leak protection.

Every Surfshark subscription comes with a 30-day money-back guarantee. You can also experience its features completely free by trying Surfshark’s 7-day free trial on mobile devices.  It also has dedicated 24/7 live chat support that you cannot to when your Shudder VPN not working.

Check out our Surfshark review to learn more about its features.

NordVPN is the largest server network VPN for Shudder, as it has 5500+ servers in 59 countries, including 440+ servers in 4 locations of UK. It is one of the reputable VPN providers in the VPN market due to its reliability and excellent security features. You would never have to worry about throttling as it offers unlimited bandwidth and bypasses ISP throttling.

To check its unblocking capabilities, we connected to NordVPN’s Docklands server and were impressed by the result. It gave us access to Shudder within no time, and we could enjoy Moloch for an hour without any buffering. 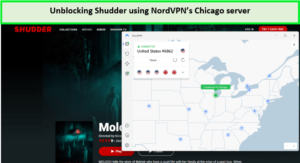 NordVPN serves allows us to binge-watch our favorite horror-thriller movies without any buffering.

Apart from Shudder, NordVPN can unblock other UK streaming sites, such as BFI Player, BBC iPlayer, and BT Sports outside UK. Furthermore, NordVPN could bypass geo block over many International streaming sites as well, including Netflix, HBO, Spotify, Hotstar, Spotify Hulu, and Comedy Central outside US.

To check out how fast this VPN is, we ran a NordVPN speed test. We observed 86.18 Mbps download and an upload speed of 42.13 Mbps on our 100 Mbps connection.

We faced no issues while streaming Shudder with these speeds.

NordVPN supports 6 simultaneous connections, easy-to-use apps for every device, and unlimited bandwidth. It is compatible with all operating systems, including Windows, Smart TVs, iOS, Mac, Linux, and Android. We found that its connection and speed remained stable on all the devices, specifically when we simultaneously used NordVPN on Roku and Firestick.

It flaunts excellent security and privacy features, including AES 256-bit encryption and DNS leak protection. It also provides a kill Switch to prevent your IP address and actual location from leaking. Along with streaming, you can also enjoy torrenting with NordVPN in UK P2P servers.

Lastly, It has reliable chat support for your assistance and a 30-day money-back guarantee to try it without risking a single penny. If you don’t believe us, check out NordVPN’s free trial in UK and see for yourself. You can get a NordVPN subscription only for GB£ 2.82/mo (US$ 3.49/mo) (Get 57% Off + 3 Months FREE on 2-Year Plan).

Jump over to our NordVPN review UK to learn more about its features.

As so many VPNs are available in the market, finding the best VPN for Shudder outside UK can be challenging. However, we choose and evaluate each VPN based on the following factors:

Can I use a VPN on Shudder outside UK?

Yes, you can use a VPN for Shudder outside UK to stream content from abroad or wherever you are. A premium VPN like ExpressVPN with excellent security features, fast speeds, and unlocking capabilities will let you access Shudder effortlessly.

Does ExpressVPN work with Shudder outside UK?

Yes, ExpressVPN works amazingly with Shudder and all major streaming sites outside UK. Its ‘Media Streamer’ feature allows you to stream videos on all devices, including Gaming Consoles.

How do you get Shudder outside UK?

You can get Shudder outside UK by following the simple steps below:

Due to licensing and content distribution issues, many horror fans find it difficult to access Shudder from their desired location. But the best VPN for Shudder outside UK can quickly solve this problem by bypassing geo-restrictions and letting you access Shudder no matter where you are.

Our recommended Shudder VPNs will connect you to the server in one of those countries where Shudder is available and let you watch your favorite movies without any issues. We recommend using a VPN with an extensive server network, fast speed, and excellent security features. ExpressVPN is our top pick due to its superb performance. So why not give it a try?