How to Watch Pluto TV outside UK [Updated 2023]

Unfortunately, Pluto TV is unavailable everywhere across the world. This free VoD and live streaming service is only available in approximately 20+ countries worldwide, including the US, UK, Australia, Germany, Spain, and more.

To watch it anywhere it’s not present, you need a VPN service. ExpressVPN is our top recommendation for this.

Pluto TV is a free Internet television service. It is entirely supported by advertisements (much like broadcast TV), so anyone can access Pluto TV free of cost. The channel offers live TV streams as well as movies and TV shows on demand.

Unfortunately, Pluto TV is available in only a few regions, including the US, UK, and Australia. If you are located outside these regions, you’re going to see an error message like this:

We’re sorry, but Pluto TV is no longer available in your location. We’re working hard to bring Pluto TV back to this area, so stay tuned to find out when we’ll be back. 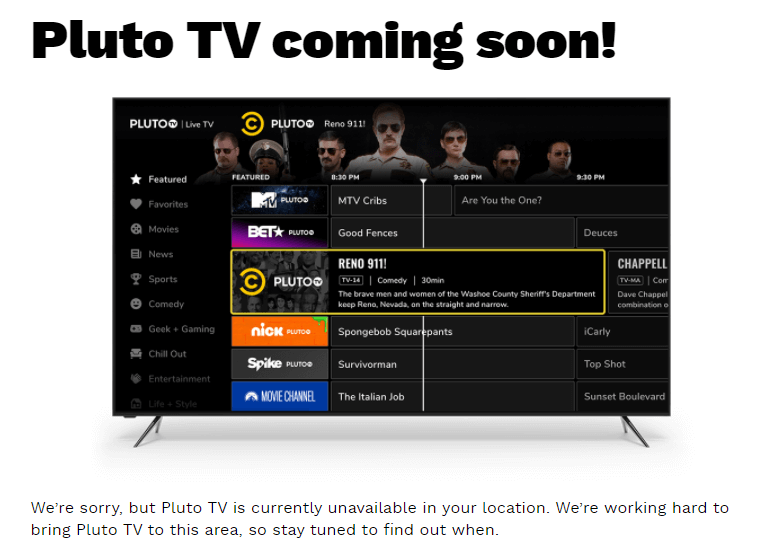 Fortunately, it is quite simple to access Pluto TV outside UK if you have the best VPN service at your disposal. A VPN will bypass the geo-restrictions in place, allowing you to watch live TV and video on demand on Pluto TV anywhere outside UK.

We tested 40+ VPNs with Pluto TV, and out of them, ExpressVPN remained our top choice, thanks to its multiple UK servers, great unblocking capabilities, and amazing speeds. But we would highly recommend to use US servers to unblock Pluto anywhere outside its availability region.

Follow these easy steps to watch Pluto TV outside UK:

To gain access to Pluto TV at all, you need a way to spoof your UK IP address so that you may appear to be located in the UK when accessing Pluto TV.

We tested 40+ VPNs on the basis of unblocking capabilities, super-fast speeds, UK servers, and more and came across these 3 VPNs for Pluto TV outside UK:

ExpressVPN is the best VPN to watch Pluto TV outside UK. The provider currently offers 3000+ servers in 94 countries, and the most remarkable thing is that the speeds remain outstandingly consistent throughout its whole network.

This VPN offers multiple servers in 4 server location in UK. We connected to its UK server to try unblocking Pluto TV and successfully did that within 3 minutes.

With ExpressVPN, there was hardly any buffering at all, and we were able to catch a Star Trek episode that was airing online. Furthermore, throughout testing, we were able to stream Pluto TV in HD quality.

As for speeds, there’s no better VPN out there than ExpressVPN. We conducted an ExpressVPN speed test on its Miami server and got super-fast speeds of 86.18 Mbps on a 100 Mbps connection, which was fantastic.

ExpressVPN is perfect for unblocking Pluto TV. It is also highly efficient for accessing Discovery, TruTV, Epix, and CBS.

Learn more about this VPN in our detailed ExpressVPN review.

Get ExpressVPN for Pluto TV outside UK

Surfshark is one budget-friendly VPN to watch Pluto TV outside UK. Surfshark is easily one of the best cheap VPNs available for users on a tight budget, costing only GB£1.67/mo (US$ 2.05/mo) (Get 84% + 2 Months FREE on 2-Year Plan).

We then tried streaming Young Sherlock Holmes and were able to enjoy it in HD without any lags outside UK. As for speeds, we conducted a Surfshark speed test on the server we were connected to. This VPN effortlessly delivered an average speed of 84.34 Mbps on our 100 Mbps connection.

Surfshark offers user-friendly apps on all multiple devices as well as unlimited multi-logins. We tried setting up Surfshark on our router and enjoyed a secure connection on all our devices. We also set it up on our FireStick separately and enjoyed Pluto TV on a big screen.

Surfshark is also an excellent choice for unblocking Optus Sport and Syfy, and INSP as well as many other popular US streaming channels.

Let’s not forget that Surfshark also offers a 30-day refund policy, so you can check out all its premium features, test them, and in case you don’t like the service, cancel your Surfshark subscription.

To know more about this VPN, go through our Surfshark review.

Get Surfshark for Pluto TV outside UK

NordVPN, a reliable VPN to watch Pluto TV outside UK. Not only is NordVPN fast, but is also highly efficient when it comes to unblocking streaming content online.

We then started watching The First 48 on our server and it constantly delivered us HD quality and bufferless streaming.

Conducting a NordVPN speed test on its New York server delivered us blazing-fast speeds of 83.48 Mbps on a 100 Mbps connection, which was fantastic.

NordVPN offers 6 multi-logins and compatibility with various devices, including Android, iOS, Windows, macOS, FireStick, and more. We tried using NordVPN with Roku, and it worked great as well.

With NordVPN, you can also access other US streaming services like Tubi TV, Vudu, and Comedy Central.

Check more of its features out in our NordVPN review.

Get NordVPN for Pluto TV outside UK

How to Watch Pluto TV outside UK on Devices?

You can watch Pluto TV on many devices. Here is a step-by-step guide to watching Pluto TV on Roku, FireStick, Xbox One, and more:

How to Watch Pluto TV outside UK on Roku?

How to Watch Pluto TV Outside UK on XBox One?

How to Watch Pluto TV Outside UK on FireStick?

How to Watch Pluto TV Outside UK on Android Box?

What are Some Popular Channels on Pluto TV outside UK?

So now that you know how to watch Pluto TV outside UK and access its complete content library let’s go through some of the most frequently asked questions about Pluto TV.

Does Pluto TV work outside UK?

Yes, Pluto TV works in a select few countries other than US and Australia. These include UK, and in a limited a way, Canada. However, for most other countries, Pluto TV is unavailable unless accessed with a strong VPN.

Can you watch Pluto TV offline outside UK?

No, since Pluto TV is an online video streaming service, there’s no way to watch Pluto TV offline.

How to watch Pluto TV on TV outside UK?

It is no surprise Pluto TV has grown exponentially in popularity over the years. However, what has remained the same is its same old geo-restriction policy.

Thankfully, you can now easily bypass these geo-restrictions and access Pluto TV outside UK simply by connecting to a region-appropriate server in your VPN app.

Out of all the VPNs, ExpressVPN is our top recommendation due to its 4 server locations in UK mind-blowing unblocking capabilities, and fast speeds.

It also offers a 3-month free subscription on its annual plan, so you can enjoy the VPN for 15 months straight while paying for just 12.