Goose VPN might offer a lot of fancy apps, but is it any good? Check out all of its pros and cons in our extensive review of the service to see if it's worth getting in 2022.

Visit Goose VPN
Get 77% off

Goose VPN – I know the name sounds weird, right?  But you’ll actually be surprised by how good this VPN really is. To be honest, I had very low expectations at the time of writing this Goose VPN review.

However, after playing around with it for a week, I found it to be a pretty decent VPN service.

I was not only able to unblock US Netflix with Goose VPN, but also download relatively large torrent files with ease. As for speeds, I didn’t find it to be too slow. I also really like their apps as well. Although slightly dated-looking, they work pretty great.

That being said, while Goose VPN is a pretty decent service, it is not the best option out there. I say this because it lacks a bit in terms of what it has to offer.

After all, it only offers a few servers, lacks built-in leak protection, and is significantly more expensive than a much better VPN like Surfshark.

Overall, after weighing all the pros and cons of Goose VPN, I’ve given it 3.5 stars in this review.

To thoroughly test the Goose VPN for its pros and cons, I used my 9 step rating criteria:

Jurisdiction – Where is Goose VPN located?

Goose VPN is based in the Netherlands, which is an unsafe jurisdiction in the VPN world. If you don’t know, the Netherlands is a part of the Nine Eyes and is therefore obligated to keep logs.

This means that if the authorities were to ask Goose VPN to hand over its users’ data, it will have to comply. So, if you value your privacy and are fearful of VPN logs, you might want to go with something like Surfshark which is based in the BVI.

As for logs, the Goose VPN claims to offer a no-logs policy, If you head over to their privacy policy, you’ll see that they, in fact, don’t collect any usage logs. As for connection logs, they do monitor bandwidth usage which isn’t going to harm your privacy in any way.

But one thing which I found quite weird was the fact that they collect real IP addresses. However, they claim to log it only once, so this shouldn’t be something to worry about too much.

As for security features, Goose VPN offers strong 256-bit AES encryption along with 4 industry-standard VPN protocols. You can choose between IKEv2, L2TP/IPSec, PPTP, and OpenVPN. Although you do get options to choose different protocols, I would still recommend going with OpenVPN since it’s the safest.

So, overall, the Goose VPN is pretty secure. But, when it comes to offering other security features, Goose VPN lacks a bit behind. For instance, you’re not going to find built-in leak protection, split tunneling, or ad-blocker.

These are pretty basic features that most VPNs nowadays offer. The only value-added security feature that Goose VPN offers is a Kill Switch.

Even though Goose VPN doesn’t come with built-in leak protection, I didn’t notice any leaks during my testing. In fact, it performed exceptionally well in my leak test. To perform my testing, I connected Goose VPN’s US server. Here are the test results:

First of all, I tested for IP leaks while connected to the US server of Goose VPN. As you can see from the screenshot below, only an IP address from the US is being displayed and my original IP address is nowhere to be seen. 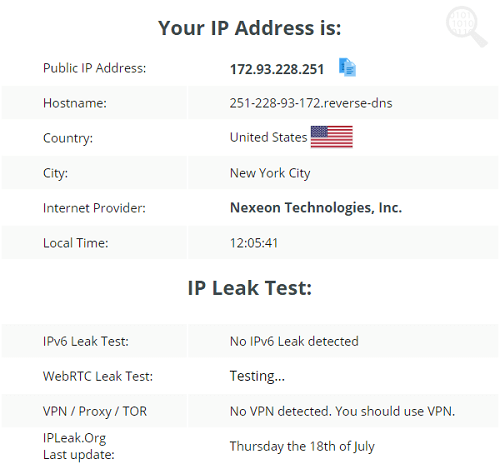 Next, I checked for DNS leaks while still connected to the US server and Goose VPN again came out clean. As you can see from the screenshot below, I’m connected to a DNS server from the United States. 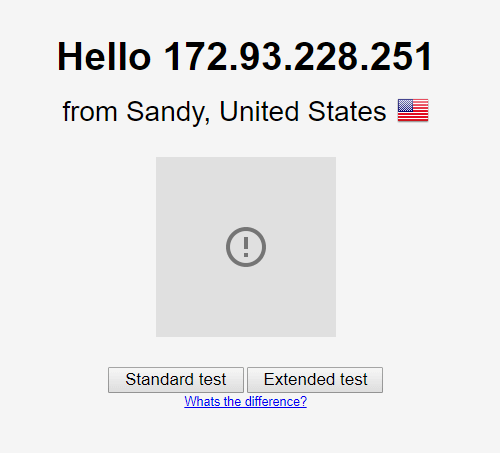 Lastly, I also checked for WebRTC leaks and Goose VPN passed this test too without any issues. Even after conducting multiple tests over and over again, Goose VPN stood pretty strong.

Despite offering only 100+ servers in some 30 countries, Goose VPN is still P2P compatible. However, since you don’t get a lot of options to choose server locations, you might want to pick and choose a server that supports P2P.

I personally found the Netherlands server to work the best. But again, I do wish they offered my server locations.

Speaking server locations, Goose VPN offers servers in South America, Africa, Europe, and even Australia. Again, this sort of server distribution is good enough, however, other VPNs do it way better. In terms of connectivity, Goose VPN is fairly fast and I didn’t encounter any issues connecting to its servers.

Speed – How fast is Goose VPN?

As for speeds, Goose VPN is actually pretty decent. I played around with a lot of its servers and found it to deliver above-average speeds on a 35 Mbps test connection. First, here’s a screenshot of my default internet speeds without Goose VPN connected:

When connected to the Canadian server of Goose VPN, I managed to get around 29.50 Mbps downloading speed. This is really good considering it doesn’t offer a lot of servers.

With the US server of Goose VPN, I managed to get slightly reduced speeds, however, nothing too terrible. On average, the US servers managed to put out around 15.95 Mbps download speed which is not all that bad.

Lastly, I also checked the speeds with the UK servers. On average, the UK server managed to crunch out around 15.67 Mbps download speed. Overall, in terms of speed, Goose VPN is pretty decent.

Surprisingly enough, during my testing, Goose VPN managed to easily unblock US Netflix for me. This is pretty impressive considering that not a lot of VPNs tend to work with Netflix nowadays. As for playback quality and overall performance, I tried playing a bunch of shows on Netflix like “where the money is” and didn’t encounter any buffering issues at all. 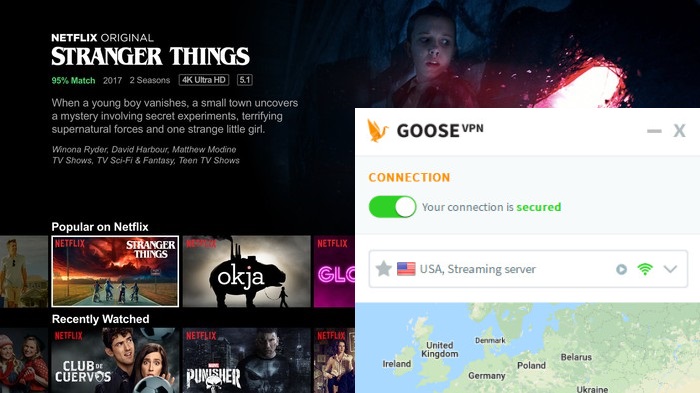 Other Streaming Services that work with Goose VPN

Aside from Netflix, Goose VPN also surprisingly managed to unblock BBC iPlayer with the UK server. Although I wouldn’t say the quality was all that great, however, it’s still pretty impressive to see it working with BBC iPlayer in the first place.

Compatibility – Which devices can I use Goose VPN with?

As far as compatibility is concerned, Goose VPN is pretty good. In fact, it offers apps for Windows, Mac, Linux, Android, Android TV, iOS, Chrome, and even Routers. The fact that it is compatible with routers, means that you can use it on other devices like gaming consoles and smart TVs. Overall, Goose VPN is pretty decent compatibility-wise and can be used on unlimited devices simultaneously.

Goose VPN offers standalone dedicated apps for both Windows and Macs. They are both well-designed and pretty easy to navigate through. I love how easy it is to select between servers. However, in terms of options, if found to be extremely basic. You’re not going to find a lot of options for configuration or features.

As for the iOS and Android apps, they’re pretty modern-looking. In fact, they’re recently completely revamped the whole UI of their mobile apps. That being said, similar to their desktop apps, you’re not going to find a lot of options.

The only options they offer in their iOS and Android apps are Smart safe and protocol selection and that’s about it. Overall, it would have been nice to see a bit more options. As for ratings, Goose VPN has a 3.5-star rating on Google Play Store and a 4.8-star rating on the iTunes store. 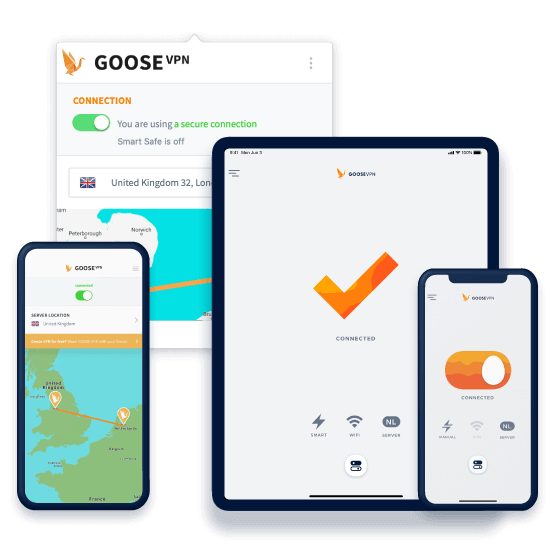 Pricing – How much does Goose VPN cost?

As for pricing, Goose VPN is not necessarily affordable. I mean, Surfshark in comparison offers way more features for just $2.49/mo, which is obviously cheaper than Goose VPN which starts from $5.75/mo. If we talk about pricing plans, Goose VPN offers three plans. You can choose between monthly, one-year, and three yearly plans. Here are pricings for each of their plans:

Overall, I would love to see an option for Bitcoin added in the future. In my experience, VPN customers prefer privacy over convenience when it comes to payment methods. If we come over to refunds, there’s not much to complain about.

Goose VPN offers a generous month-long refund policy which is pretty decent. In addition to an extensive refund policy, Goose VPN also offers 30-day free trials as well. However, you’ll have to make do with just 500 MB of bandwidth.

Overall, yes, Goose VPN is pretty trustworthy. Even though Goose VPN is headquartered under the Nine Eyes jurisdiction, the fact that it doesn’t store any activity logs makes it quite trustworthy. As for its Trustpilot rating, Goose VPN has a solid 4.2/5.0 star rating. In addition, it has pretty positive reviews as well. For instance, Goose VPN has 51% Excellent reviews and only 8% Bad reviews. 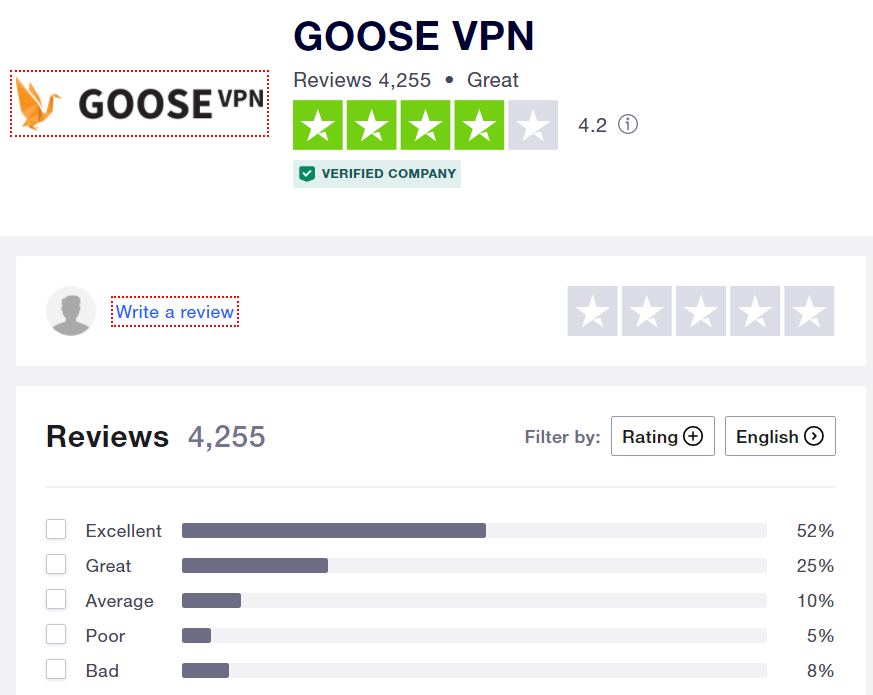 Comparison between ExpressVPN and Goose VPN

Although Goose VPN is a pretty decent service, It still lacks a bit in features. So, if you want to check out something that offers a ton of options, here’s a table with a quick comparison between ExpressVPN and Goose VPN.

Since this service is relatively new, it lacks in some aspects that make a VPN service appealing to most users. If you’re like me and want an alternative to Goose VPN, check out the list of alternative VPNs below:

Do I Recommend Goose VPN?

Yes, I do recommend Goose VPN. I like that it offers decent apps, powerful encryption, and above-average speeds. I also love the fact that it works with Netflix and torrenting. Overall, Goose VPN is a pretty decent service. However, it still needs to improve upon features to deserve a 5-star rating.

The fact that it costs a lot and offers only a few features, is exactly why I think it doesn’t offer the best value for your money. Even though it might be good enough for most users, however, there are far better options out there.

While I do recommend using Goose VPN, I can’t give it more than 3.5-stars in this Goose VPN review. So, if you want to go for Goose VPN, that’s all well and good, but if you want an alternative, check out our unbiased VPN reviews.