Mullvad VPN – If you’re looking for an affordable VPN service, that offers a decent amount of features and is also quite secure, then Mullvad is all that you need. Right from the moment you visit their website, you’ll know that Mullvad is a well-built product. The user experience is just amazing.

In the previous Mullvad VPN review in New Zealand, I complained about a small server network and the lack of dedicated apps for both iOS and Android. However, that’s all been taken care of now. One thing Mullvad does better than any VPN out there is anonymity. You don’t even have to provide an email address to get started.

Overall, it’s a seriously powerful VPN boasting features like Multi-hop, Port forwarding, OpenVPN, 256-bit AES encryption, and 800+ servers. Sure, you can argue that ExpressVPN is better, but Mullvad is also capable of delivering similar performance. After weighing all the pros and cons, I have given Mullvad a 3.8/5.0 star rating. Check more VPN ratings and recommendations by us.

To thoroughly test the Mullvad VPN for its pros and cons, I used my 9 step rating criteria:

Jurisdiction – How safe is Mullvad VPN?

Mullvad is a Swedish VPN provider that’s quite renowned in the Nordic region. Even though technically Sweden is a part of the 14-eyes, however, Mullvad keeps no logs and doesn’t require any information when signing up making it actually safe to use. Even more impressive is the fact that the EU’s Data Retention Directive doesn’t apply to Mullvad because it’s technically not considered an electronics communications service.

As I mentioned earlier, you don’t have to provide any information to purchase a subscription plan. Mullvad generates a random 16-digit account number which you can use to login into your account. Another reason why I think Mullvad is safe is that it accepts anonymous BitCoin payments. 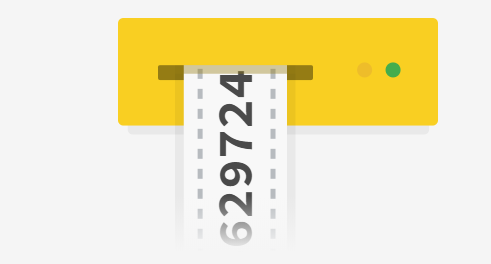 As far as security is concerned, Mullvad has all the right features. And it also keeps no logs as per its logging policy. As I mentioned earlier, you can purchase a subscription without providing them even the slightest of your personal details. Not even your email address.

It keeps the customers’ activity logs, which means it does not retain any information about your activity on its server. Here are some points about the information Mullvad doesn’t collect:

From a security standpoint, Mullvad packs in powerful VPN protocols. You get not only OpenVPN but also the latest WireGuard protocol. The OpenVPN option comes with military-grade encryption, and the WireGuard option certainly gives Mullvad a distinct advantage over other providers.

Aside from powerful encryption, every Mullvad app comes with a built-in automatic Kill Switch. If you don’t know what this feature is used for, it basically disconnects your internet connection until your VPN connection restores. This prevents your sensitive information from accidentally leaking in case your VPN connection malfunctions. You can find this option labeled as “Block when disconnected.” 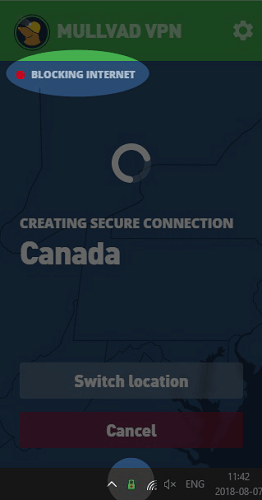 Another major feature that comes builtin with Mullvad VPN is DNS leak protection. This feature prevents your browser from leaking your real IP address. The way Mullvad makes this possible is because it owns its public DNS servers. Leak protection is automatically enabled, so you don’t have to worry about any accidental leaks.

Another awesome feature that not many VPN providers aside from Mullvad offer is the SOCKS5 proxy. This feature can make you even more anonymous on the web. It also prevents issues like CAPTCHA verification which is super helpful. You can configure Mullvad’s SOCKS5 proxy on your browser, which will direct all of your traffic via Mullvad. This way, even if you forget to use its proprietary app, you will still be protected by Mullvad VPN.

Thanks to built-in leak protection, Mullvad is totally leakproof. During my testing, Mullvad VPN managed not to expose my IP, DNS, and WebRTC information. Here are some screenshots for proof:

Let’s start with the IP leak test. To check for any leaks, I connected to a Canadian server location (ca1-wireguard.mullvad.net). As you can see from the screenshot below, my default IP address is not being exposed anywhere. Pretty impressed so far. 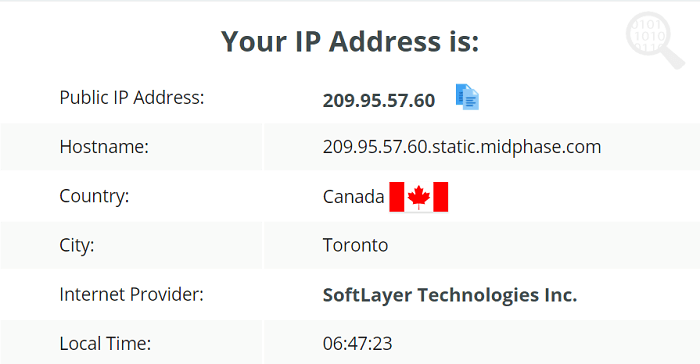 Next, let’s check for any DNS leaks. Thanks to the built-in DNS leak protection and the fact that Mullvad uses its own DNS servers, Mullvad passed this test too without any issues. Check out the screenshot below. 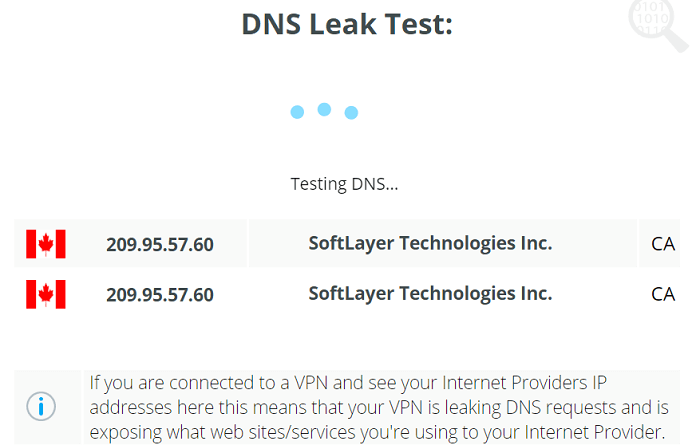 As for the WebRTC leak test, Mullvad VPN passed this test too without any effort at all. Just check out the screenshot. As you can see, my original IP is not being detected.

Finally, I also ran Mullvad VPN’s app through VirusTotal.com and found no hidden viruses. This is quite impressive. Just check out the screenshot of the result below:

Servers – Is Mullvad good for torrenting?

To be honest, yes. Mullvad is actually great for torrenting and can easily deliver fast connection speeds (more on that later). Mullvad is also secure, and the fact that it keeps no logs makes it perfect for torrenting. That’s seriously impressive, considering that it only offers 800+ servers in 38+ countries.

Speaking of servers, I like that they have a separate server page with all sorts of information related to their servers. They let users sort out the perfect server depending on the country, city, and provider. You can also sort out servers based on the following server types:

Does Mullvad VPN work in China?

Surprisingly yes. Mullvad VPN actually works in China. The way it makes all this possible is by using cunning technology. By routing your network traffic through special bridge servers running on SSH protocol, Mullvad further encrypts your data and sends it forward to one of Mullvad’s regular VPN servers, which then passes your data to China’s infamous surveillance firewall. It isn’t effortless, but it works.

Speed – How fast is Mullvad VPN?

Mullvad is decently fast. Unlike most VPNs, it is actually fast enough to stream Netflix in Ultra HD quality. On my 35 Mbps internet connection, I encountered no sluggish speeds or connectivity issues. Before I share with you the speed test results, here’s a screenshot of my default internet connection speed:

While connected to Mullvad’s Canadian Montreal server, I managed to get around 24.46 Mbps downloading speed. Not bad at all, considering that my base connection speed was 34.73 Mbps.

With the US server of Mullvad VPN, I managed to get slightly faster speeds. On average, Mullvad VPN’s US servers managed to output 27.18 Mbps download speeds.

Finally, with the UK servers of Mullvad VPN, I managed to get on average 22.70 Mbps download speed. Although slightly slower, however, nothing worth complaining about.

Overall, Mullvad is plenty fast and should give you no connectivity issues. Just make sure to always connect to servers that are actually close to your physical location.

Streaming – Does Mullvad work with Netflix in New Zealand?

Netflix has invested heavily in blocking VPN services. However, this has not stopped Mullvad from working seamlessly with Netflix in New Zealand. During my testing, I had no issue unlocking US Netflix. I tried streaming “Narcos,” and everything played in Ultra HD quality. 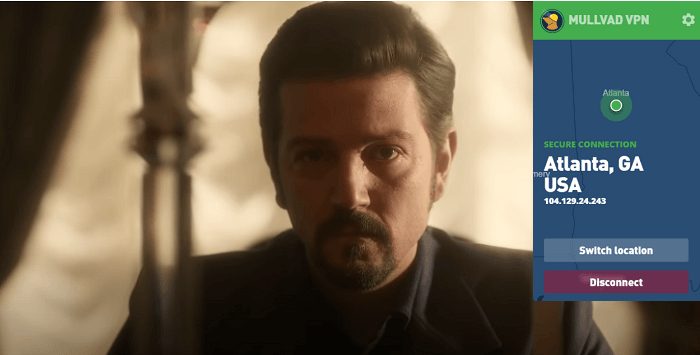 We could stream Narcos on US Netflix with Mullvad.

Other Streaming Services that work with Mullvad

Aside from Netflix US, Mullvad also worked quite well with Hulu. I tried streaming a bunch of Hulu originals with the US server and didn’t encounter any weird issues at all. The Atlanta GA server worked particularly great. Just check out the screenshot below:

Compatibility – Which devices can I use Mullvad VPN with?

During this Mullvad VPN review in New Zealand we also checked its compatibility, Mullvad supports all the major operating systems like Windows, macOS, Linux, Android, and iOS. It’s good to see that they’re now finally offering dedicated apps for iOS and Android. I’m not a big fan of OpenVPN manual setup configurations.

Also, Mullvad is compatible with DD-WRT routers. You can set it up on your router with their simple 15-step process guide. Overall, app compatibility is not a big issue for Mullvad, and you can even use a single account of 5 devices simultaneously.

If we talk about the Windows and macOS apps of Mullvad, they’re pretty decent looking. These apps are also fast and come with a decent amount of options as well. You can easily enable the Kill Switch feature and leak protection by simply tapping on toggle switches. I also like their server selection setup. It’s not overly complicated, which is super convenient. 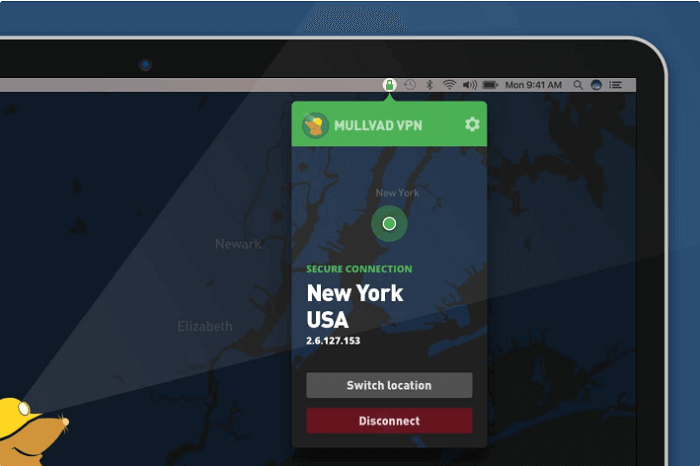 Similarly, Mullvad has designed a custom privacy solution for Linux as well. As for usability, Mullvad VPN’s Linux client comes packed with security features like DNS leak protection and a Kill Switch. Overall, their desktop apps are very well designed. 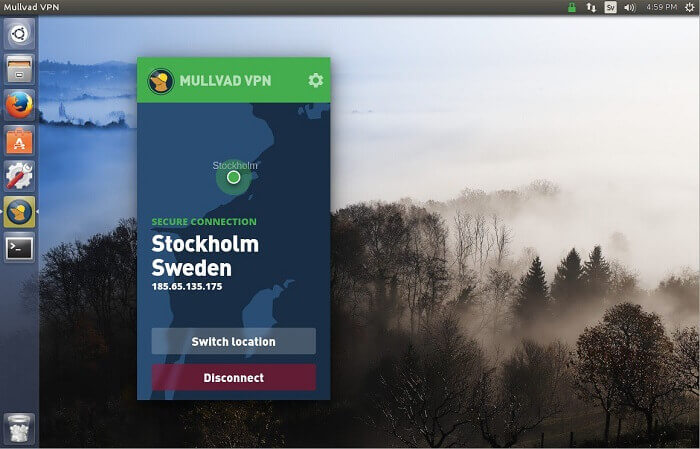 Even their iOS and Android apps are very pleasing to use. You’re not going to notice any lags or bugs. The only thing I wish they could improve upon is adding more options. As for mobile app ratings, Mullvad VPN has a 4.8-star rating on iTunes. As for their Android app rating, it is currently not mentioned on the Google Play Store. 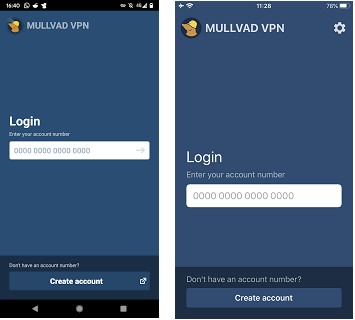 Pricing – How much does Mullvad cost in New Zealand?

Mullvad is pretty decently priced for Kiwi users. They only offer one monthly flat-rate plan, which costs NZ$8.56/month. I like this subscription plan because you can pay as you go instead of committing to long-term subscriptions. As for payment methods, Mullvad accepts a ton of payment options. Just check out this list:

Note: Paying through Crypto gets you a 10% discount.

Last but not least, let’s talk about refunds. Similar to other renowned VPNs, Mullvad offers a 30-day refund policy. Just keep in mind that you will not get refunded if you pay through cash due to “anti-money laundering regulations.” You can learn more about refunds here.

Yes, without a doubt, Mullvad is a good VPN. It’s transparent, fast, and comes with a ton of awesome features. It also plenty of positive reviews on Trustpilot. It has an overall score of 4.3/5.0 and a 75% excellent review. And the best part is, it has zero negative reviews. 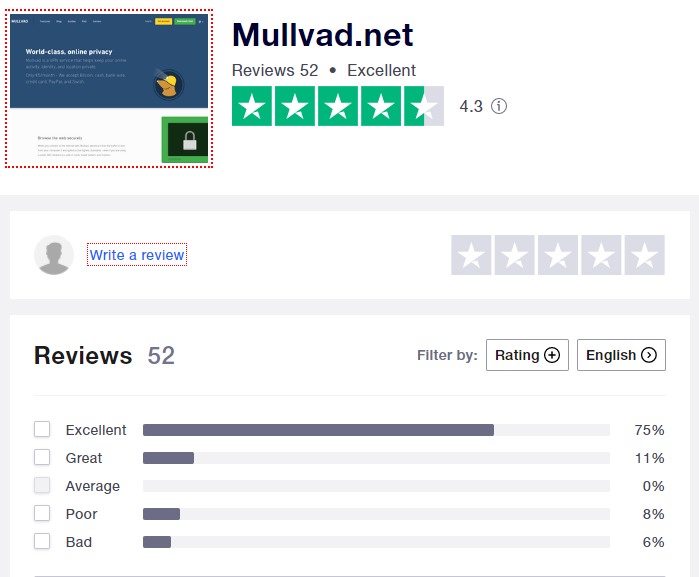 As far as their customer service goes, they only offer two key options. You can either get help through Email or FAQs. Now, as you might guess already, they don’t offer any live chat support. This can be a bit disappointing for some users. That said, I found their live chat support to be pretty decent. They got back to me within an hour or so.

Comparison between ExpressVPN and Mullvad VPN in New Zealand

While writing this Mullvad VPN review in New Zealand. Overall, I think Mullvad is a solid VPN service. But if you want something that offers more servers or is slightly cheaper, here’s a brief comparison between ExpressVPN and Mullvad VPN:

Do I Recommend Mullvad VPN in New Zealand?

So concluding this Mullvad VPN review in New Zealand. Yes, I recommend Mullvad VPN. There are plenty of reasons why. First off, its token-based account creation is super unique. I love that you don’t need to provide any information to create an account. Also, Mullvad offers tons of features. It is also fast and works quite well with both torrenting and streaming.

But what really separates Mullvad from other VPNs is its simple and straightforward mode of operations. Even if you’re a newbie, you’re going to love Mullvad. It is also quite affordable, and in my opinion, it actually offers real value for money. Overall, just because it lacks live chat support, I have given the service a 3.8/5.0 stars rating.

Hope you like this Mullvad VPN review in New Zealand, if you still have any queries you may ask in the comment section below.