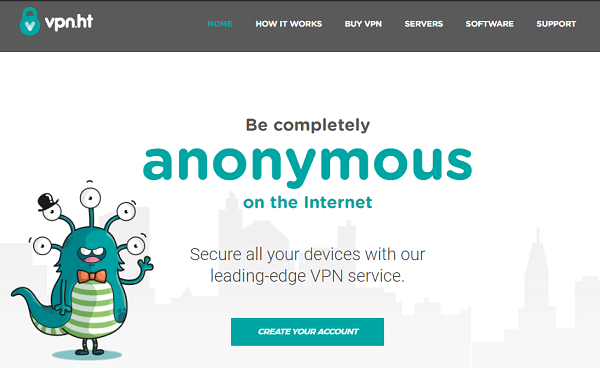 VPN.ht is a Hong Kong-based and open-source personal VPN service. VPN ht was advertised as a service that allows access to Popcorn Time. It was the safest and most reliable solution to access Popcorn Time anonymously. Since the VPN encrypts your entire network connection, spoofs your location to a foreign country, and assigns you a different IP address.

The service does not have a multitude of servers like ExpressVPN or NordVPN. However, it unblocks Netflix and supports torrenting. Similarly, it has different protocols in its armory like OpenVPN, PPTP, and L2TP/IPsec.

In this VPN.ht review, I have inspected each offering of the service like pricing, speed, jurisdiction, privacy, trustworthiness, and compatibility thoroughly.

Therefore, I don’t recommend the service as it leaks your original IP addresses and exposes malware.

That said, you can subscribe to its monthly, yearly plans at the cost of NZ$1.61 and NZ$5.35 monthly, respectively.

Surprisingly, you will have to pay NZ$8.03 each month if you continue using its monthly plan after 30 days.

If you’re interested in any other VPN provider, visit our VPN reviews guide for more information.

For this VPN.ht review. I have tested this VPN according to my 8 steps testing criteria. This criterion includes:

Pricing – What is the cost of VPN.ht?

The VPN.ht price is extremely reasonable.

Simply put, one can even afford this VPN under a tight budget.

There are two packages, and both of them offer the same set of features. However, the prices vary depending upon the duration of your subscription.

If you are willing to give it a try monthly, you are in for amazing news. The providers are offering the first month of the package for NZ$1.61 only. The price, however, will go up to NZ$8.03/month from the second month, should you decide to continue the subscription.

Similarly, if you decide to test out its annual subscription, you will only have to pay NZ$64.36/year. Think of it this way. You are supposed to pay only NZ$5.35/month to protect your account against cybercriminals and malware.

Apart from protecting your device from harmful threats, you also get to access the websites that are restricted in your region.

With a single account, you can connect this VPN with 3 devices at the same time. This means that you can secure multiple internet-enabled devices, including your PC, Smartphone and Tablet. 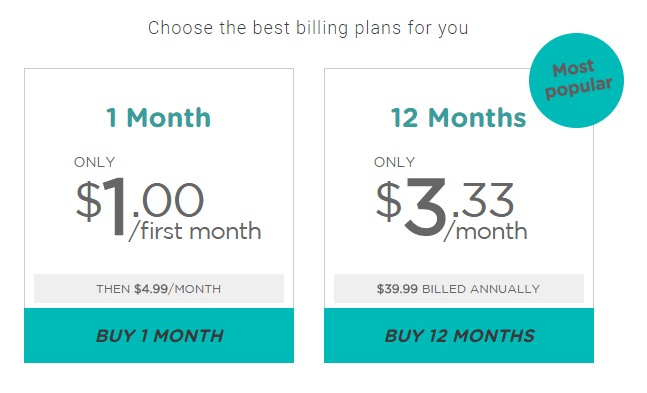 For those who wish to remain anonymous during the transaction, cryptocurrencies are the perfect solution.

On their website, the providers state that they will refund anyone unhappy with the service. This refund will be available within the first 30 days of use.

Regardless, you will have to mention a valid reason to get your money back.

While the idea of multi-protocols fascinates many, I have always believed that even a single protocol can perform better, provided it is fully functional all the time.

VPN.ht also offers various encryption protocols that you can choose from:

Among these protocols, OpenVPN is the most secure, thanks mostly to its open-source nature and the encryption level it supports. OpenVPN and AES 256-bit combine to form a ruthless shield against hackers and cyber snoopers. Intelligence agencies, massive banks, and global tech giants use this combination to protect their sensitive data.

L2TP is another capable protocol, but it will slow down your connection. Meanwhile, PPTP is widely considered an obsolete technology, but some Netizens use it for everyday geo-dodging.

In general, when it comes to protocol and encryption options, this VPN has got you covered.

VPN.ht keeps giving us good reasons to give it the benefit of the doubt. Who does not want a free SmartDNS service along with a VPN subscription? With an extra layer of the added security provided by the VPN, I was absolutely over the moon when I used its SmartDNS service.

While using its SmartDNS service, unlike the traditional services, I was actually able to unblock more than Netflix and Hulu. I also unblocked some of the US’s top channels and enjoyed unblocking some of the top networks like ESPN and HBO Go.

SmartDNS service works on all the devices to support the unblocking feature across all the platforms. I, therefore, believe VPN ht DNS service as an exceptional feature for hi-speed streaming and elite online experience.

You can find more about ht VPN SmartDNS on their official website.

Jurisdiction – Where is VPN.ht located?

VPN.HT is an online privacy service based in Hong Kong. Released in 2014 by a Wicked Technology company, this VPN quickly gained prominence by providing exclusive support for Popcorn Time.

However, since the discontinuation of the original Popcorn Time service, the partnership between the two entities has also ended.

But if you’re looking for alternative VPNs to use with popcorn time in New Zealand, here’s the list.

Many users judge VPNs based on their server list. I have examined the provider and discovered that it offers 128 servers in 23+ countries.

Also, the VPN offers 22 servers in the Netherlands, a P2P-friendly country, and imposes lenient data retention laws compared to other nations.

Speed – Does VPN.ht have Fast Speeds?

I conducted a speed test while using a 30 Mbps internet connection:

After connecting to its US server, connection speed dropped by 50% almost.

The provider cannot be included in the list of fastest VPN services as it offers average speeds to its users.

Streaming – Does it Support Netflix & Other Streaming Services?

VPN.ht is a Hong Kong-based VPN service that supports both Netflix and torrenting.

With Netflix clamping down on VPN providers and other tools for bypassing geo-restrictions, unlocking this streaming giant has become a herculean task.

Despite this, the providers of this VPN seem to have unlocked the secret of evading Netflix’s powerful VPN detectors.

While I tested this VPN for Netflix, I was able to unblock Netflix on every single attempt. Suffice to say. The VPN.ht-Netflix combination did not let me down.

That said, you may face issues when it comes to using Kodi, a famous and free streaming player, along with VPN.HT. When we talk about streaming, there is a perfect combination of Kodi and VPN in New Zealand for your secure streaming anonymously.

In this scenario, you are bound to use a free VPN Kodi in New Zealand service to watch your preferred staff on Kodi securely.

Originally designed to work with a BitTorrent platform, torrenting is one of the key features of this VPN.

The providers have imposed absolutely no restrictions on downloading torrents. You can use torrents all day, every day, with this VPN connection.

VPN.ht empowers its users to securely download gigabytes of data without worrying about their network security.

While conducting the below-mentioned tests, I received the following unsatisfactory result:

As per the above DNS test, it leaked my DNS data.

While performing IP and WebRTC tests, I did not find the secure result:

I guess luck was not on my side while conducting these tests because its Windows setup file also revealed malware during malware testing.

While writing this VPN.ht review, it is found that VPN.ht does not log its users’ activities.

We live in an age where everything we say or perform on the internet is tracked and recorded by online surveillance agencies. Even a few VPN services are also involved in keeping a record of your online activities. While they do protect you, they keep your record for security purposes.

But with VPN.ht, you are safe because it does not store any logs. It allows you to do or perform whatever you want on the internet freely.

As far as customer support is concerned, you may have already noticed our euphoria when I talk about it.

Unfortunately, the VPN provider does not offer Live Chat support. But instead, you have to make do with an Email ticketing system.

Despite this, I have no complaints as the providers do a great job answering queries through emails.

I discovered in this VPN.ht review that the providers typically resolve a ticket within 8-10 hours. Moreover, the support staff is extensive with the answers.

Other than this, the VPN has a pretty basic Knowledgebase which contains Setup guides and FAQs.

Compatibility – Does it Support All Devices?

VPN.ht is compatible with all the famous operating systems.

It has a user-friendly and intuitive client for Windows. At first glance, this app is easy on the eyes with its gimmicky interface graced by the VPN’s trademark aliens.

The service provides exclusive applications for Android and iOS users. With VPN ht apk installed on your Android phone or tablet, you’re all set to bypass the geo-restrictions and access thousands of entertainment sites and services from anywhere in the world.

Similarly, you can download the VPN.ht iOS app from its official site to protect your desired device.

Popcorn Time was a great way to stream, best of the time movies, shows, videos, music, and more media on different devices. Still, the service always remained a subject of controversy.

This was due to the infringing nature of the service, as Popcorn Time utilizes torrent links for fetching movies. Unsurprisingly, people turned toward VPN to use Popcorn Time to avoid copyright notices.

Thus, copyright owners and ISP were unable to identify the details and location of the user. Interestingly, VPN.ht was included in the client of Popcorn Time. This made it the official VPN partner of the streaming service.

Unfortunately, the tale of this VPN and Popcorn Time had a sad ending. Motion Picture Association of America (MPAA) successfully pressurized the developers of Popcorn Time to shut down the service in March of 2014.

Comparison between ExpressVPN and VPN.ht in New Zealand

If you want to differentiate between ExpressVPN and VPN.ht, have a look at the below-mentioned table:

Alternatives of VPN.ht in New Zealand

When it comes to VPNs, one size does not fit all. Most people have their own preferences regarding VPN services and are not easily impressed by just any VPN provider.

If for some reason, you are unimpressed by this VPN, then I recommend you to read the following reviews.

Do I Recommend VPN.ht in New Zealand?

I have had mixed feelings while writing this VPN.ht review. On the one hand, I felt that it lacked the basic features that are usually offered by other VPN services (a Kill switch). On the other, I thought it covered its weaknesses by unblocking Netflix.

Moreover, it supports torrenting too. However, the service might leak your actual IP addresses online.

If you have any questions, feel free to ask in the comment section below. You can also check out more top VPNs in New Zealand tested by us.