Hideman. If you haven’t heard of this VPN, you’re not alone. Despite being around in the VPN industry since 2012, you’ll be lucky if you can find any information about Hideman VPN online. While Hideman VPN may be a feasible VPN solution with decent performance and a few nifty tweaks like the kill switch and the DPI protection, there are a number of reasons why I don’t recommend using Hideman. So you can Check out the VPNs recommended by VPNRanks in 2022.

For starters, it is based in the UK, so you know that it keeps logs. This is enough of a reason to not use this VPN in the first place. Although it offers a free version, it only comes with, wait for it…one server location. And even with just one server, I still couldn’t connect on either my iPhone or on my Windows computer.

The free version also didn’t work with torrenting or with Netflix and any other streaming services I tried accessing in New Zealand. The paid version, on the other hand, worked with US Netflix and BBC iPlayer, however, the speeds were atrociously slow. I couldn’t stream anything without endless annoying buffering issues in New Zealand.

Overall, after doing all the testing before writing this Hideman VPN review in New Zealand, I found it to be an outdated and probably a neglected VPN service. It only offers servers in 22+ countries, and that too if you opt for the premium version, it’s super slow, and most of the apps that it offers, are terrible looking that doesn’t even work.

So after weighing in all the pros and cons of both paid and free versions of Hideman, I recommend you don’t use this service in New Zealand. The version is terrible and the paid version is frankly doesn’t justify the starting price of AU$9.12/mo. For this price, there are far better VPNs like NordVPN and ExpressVPN that offer way more features, apps, and servers in New Zealand.

Before writing this Hideman VPN review in New Zealand, I thoroughly test Hideman for its pros and cons, I used my 9 step rating criteria:

Jurisdiction – Where is Hideman VPN based?

Hideman VPN is based in London (UK). If you don’t know, the United Kingdom is actually the founding member of the infamous surveillance alliance called the 5 eyes. This means that if the authorities were to ask Hideman for users’ data, it will have to comply with them. So, if you value your privacy, Hideman’s location of operations should be a big enough reason for you to avoid it.

Yes, with the free version, Hideman VPN keeps logs for 14 days. The good thing, however, is that it does not store usage logs. With the paid version, on the other hand, Hideman claims to keep zero logs. But none of this information is available in their privacy policy.

As for security features, Hideman seriously lacks quite a lot. Even though it offers 256-bit encryption, it only offers just one protocol (OpenVPN). You just get the option to switch between TCP and UDP. In comparison, other VPNs like ExpressVPN or PureVPN offer way more protocols in New Zealand.

But on the plus side, Hideman does offer a few basic features like Kill Switch, Anti-DPI mode, and DNS filter. It also offers options to set up port forwarding and proxy settings. Then again, other paid VPNs offer additional features like dedicated IP, Split tunneling, and even ad-blockers. Overall, Hideman barely offers any features.

So, despite being short on features, Hideman VPN surprisingly passed all my leak tests in New Zealand. To conduct my comprehensive leak tests, I connected to its Netherlands server in New Zealand and checked for IP, DNS, and WebRTC leaks.

Firstly, I checked for obvious IP leaks while connected to the Netherlands server in New Zealand. As you can see from the screenshot below, my actual IP address is not getting leaked. 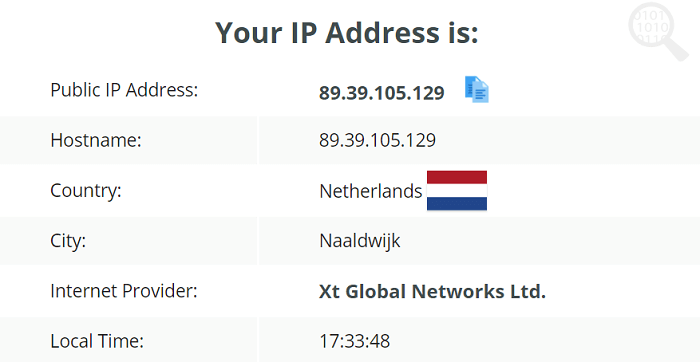 Next, I checked for DNS leaks and Hideman still came clean again. As you can see from the screenshot below, I’m only connected to a DNS server in the Netherlands.

I also checked for WebRTC leaks and Hideman VPN passed this test too, which is pretty good. Even after conducting multiple tests, Hideman VPN stood pretty strong.

Yes, Hideman VPN is P2P compatible in New Zealand. Actually, Torrents, Tor, and I2P are a few of the prominently advertised features of Hideman. It also promises torrents ‘without restrictions and penalties’ and offers access to Onion and I2P resources.

Another thing to like about Hideman is that it let you know which countries have put restrictions on torrents and P2P networking. For example, on its client, you will see red marks on locations such as Russia and Canada where torrents are illegal.

But since it only has servers in some 22+ countries, it is not good performance-wise. I tried downloading a small torrent file, but the performance was quite dreadful. So, if you use VPN services solely for torrenting, I suggest using some other VPN service with optimized P2P servers. Again, you might prefer ExpressVPN or Surfshark.

Speed – How fast is Hideman VPN in New Zealand?

As for speeds, Hideman VPN is very poor.  To test what Hideman was capable of, I performed the speed test using my base 20 Mbps Internet connection. First, here’s a screenshot of my actual speeds without Hideman enabled:

With the US location, I managed to get both terrible uploadings and downloading speeds. On average, the US only managed to output 1.47 Mbps download speeds.

With the UK sever, I got slightly better pings, however, the speed was still quite terrible. At max, the UK server only managed to push out 1.69 Mbps download speeds.

Overall, Hideman VPN is unapologetically slow. I knew Hideman wasn’t going to impress me with its speeds, but never knew it would be this slow.  If you don’t want to get stuck with something super slow, you might be better off with Surfshark VPN.

Streaming – Does Hideman VPN work with Netflix in New Zealand?

Surprisingly enough, Hideman actually worked with American Netflix in New Zealand. That being said, the streaming and playback quality was terrible. No surprise when their servers are so slow.

Looking back at it, I now know why it didn’t offer better streaming performance. It’s simply because it has a small server network. If it offered thousands of servers like ExpressVPN or PureVPN it would have easily offered better performance in New Zealand.

Other Streaming Service that works with Hideman in New Zealand

Compatibility – Which devices can I use Hideman with?

Compatibility-wise, Hideman VPN is quite weak. It only offers apps for Windows, iOS, Android, Chrome, and macOS. Although it basically covers all smartphones, tablets, and desktop devices, however, since it doesn’t offer support for routers, you have no way to use it with Smart TVs and gaming consoles.

But the good thing is that if you choose the ultimate plan, you can secure up to 4 devices simultaneously.

The Windows app of Hideman VPN looks and feels pretty outdated. After all, their Windows client hasn’t been updated since 2015. As I mentioned earlier, the version didn’t work at all.

I clicked on the connect button and the status bar at the bottom kept on loading but nothing actually happened. The paid version managed to connect, however, the performance was still terrible.

The macOS app looks quite modern compared to its Windows counterpart. It worked just fine and even offered a decent amount of features. However, nothing impressed me too much.

The Android app of Hideman VPN looks quite dated as well. Genuinely speaking, it boasts a very outdated design. It also doesn’t have very positive reviews on Google Play Store. In fact, it just has a 2.8 stars rating overall.

The iOS app, on the other hand, has a rather modern design. It also has a slightly better rating. On the iTunes store, Hideman VPN has a 3.6-star rating. But as for features, you only get options to connect automatically and enable or disable malware protection.

Pricing – How much does Hideman VPN cost in New Zealand?

According to this Hideman VPN review in New Zealand. The pricing for Hideman VPN in New Zealand is slightly expensive. It offers 3 different packages, but none of them offers any real value for money. Here are all the packages and their pricing:

Overall, Hideman is not cheap. Especially when you consider its lack of features and spotty performance. The only decent thing it offers is 4 multi-logins and 30 days money-back guarantee. In comparison, PureVPN and Surfshark are still way more affordable and offer far better features. If you want to get these VPNs instead at low prices, check out our exclusive deals on VPNs.

As for the free version, yes, Hideman offers 7 hours of free access for new users, plus 4 hours every week. But the free trial will only have 1 server. In my case, I got a German server with a limited 2 GB/month bandwidth. But as I mentioned earlier, the free version is even worse than the paid version.

To be honest, Hideman VPN is not safe in New Zealand. For starters, as I mentioned earlier, Hideman is based in the UK which is not a safe jurisdiction for VPN providers. It also keeps logs and doesn’t offer a lot of security features. Even its Trustpilot page has barely any reviews or ratings. In fact, it only has one (1) user review and a 3.6/5.0 star rating. Overall, it’s not sure what other people think about Hideman VN. 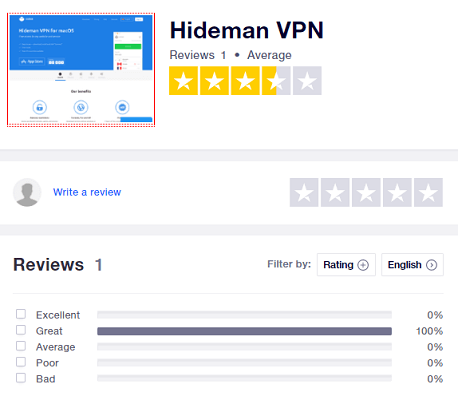 As for customer support, Hideman has no live chat option. You can contact them through either e-mail, Skype, or Jabber. There is also a FAQ section that has concise answers to several basic questions. Some may find these answers to be ‘too concise’ but I appreciate the straightforward approach of Hideman. Hideman also offers manuals to set up their applications.

Comparison between Hideman VPN and ExpressVPN in New Zealand

So by now, it’s clear in this Hideman VPN review that it is not a good VPN service. Due to countless cons, I don’t recommend using it. If you don’t wish to use Hideman, then I highly suggest you check out this comparison between ExpressVPN and Hideman.

ExpressVPN is known all over the world for offering excellent VPN services with state-of-the-art security, features, accessibility, and performance to its users. To read about ExpressVPN in detail, check out our complete ExpressVPN review.

If you don’t want to use Hideman, you can check out some of the alternatives listed below. And by the way, I highly suggest looking for alternatives.

Do I Recommend Hideman VPN in New Zealand?

No, I do NOT recommend Hideman VPN in New Zealand. It is not headquartered in a safe jurisdiction, it keeps logs, it is super slow, and it offers terrible Netflix and torrenting performance. Overall, it rightfully seems like an outdated and neglected VPN service. It barely offers any servers any security features despite costing as much as a premium VPN service.

After compiling this Hideman VPN review in New Zealand and weighing in all the pros and cons, I can’t figure out who would want to use this service. After all, there are far better alternatives out there. At most, Hideman only deserves a 2.2-star rating and that’s about it.

By now you must be looking for an alternative? Why don’t you start by checking out our unbiased VPN reviews?