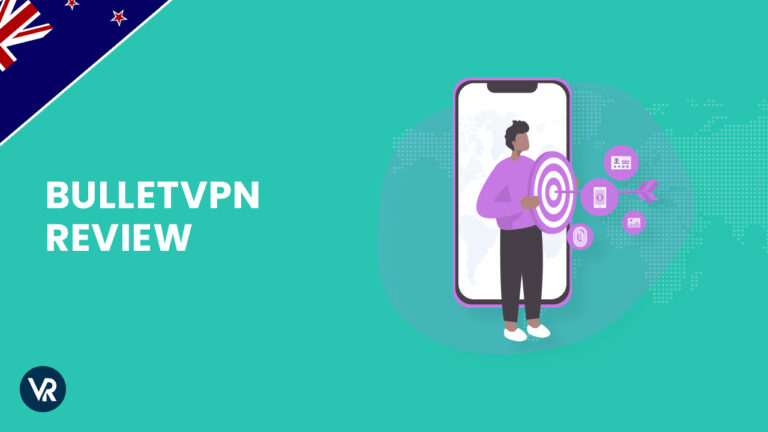 Have you been looking for a high-speed VPN that gives you quality connections and fast speed in New Zealand?

BulletVPN claims that it does. Its above-average speed was validated when I ran a speed test. Also, it has strong encryption that keeps your data protected in New Zealand.

It does not collect any logs nor does it have an expensive price in New Zealand. But it is more expensive than ExpressVPN or Surfshark. Find out in this BulletVPN review in New Zealand if this service is worth buying. You can Check the best VPNs recommended and tested by VPNRanks.

This is the list of factors that I have used to perform BulletVPN review:

Pricing – How much does BulletVPN cost in New Zealand?

BulletVPN brings you an affordable pricing plan in New Zealand. It offers 3 pricing plans or packages, but it’s easy to see which one stands out.

But with every offer, you get a no-hassle 30-day 100% money-back guarantee in New Zealand. Not many VPN service providers offer this feature for all their pricing plans.

It also offers a free trial if you contact their support team. In their Android app, you can find the option ‘sign up for free trial’ on the home screen.

Other than that, also check out our handpicked list of VPN deals right now to get amazing discounts on VPNs.

It has the strongest 256-bit AES encryption, which is the industry’s standard encryption in New Zealand.

When it comes to protocols, it offers the following:

It has some amazing security features that I will be listing and explaining it to you:

This security feature kills your internet connection whenever the VPN connection drops accidentally in New Zealand. This means, your ISP won’t know which website you were accessing even though there is a drop in your VPN connection.

BulletShield is a great security feature that only works with the kill switch feature. This feature wouldn’t allow you to connect to the internet if you are not connected to any of BulletVPN’s servers in New Zealand.

With the SmartDNS feature, BulletVPN users can stream with a minimal speed loss. This feature also helps in accessing their channels on a wide range of devices that including PC, Mac, iOS, Android, FireStick, Smart TVs, Android TV, and Chromecast.

Jurisdiction –Is it located in a 5-eyes country?

BulletVPN is based in Estonia, a Northern European country that does not fall under 14-eyes intelligence sharing nations.

Not many countries you will find in Europe that does not share intelligence data with other countries.

That is why a VPN service provider based in this region is considered safe.

Now you can look at VPNs if they are a part of fourteen eyes country.

It has 150 servers available in 55 countries including 2 servers in New Zealand. This is an important feature because the reason why it is called Bullet is because of its high-speed servers.

Most of its servers are present in Tier-1 data centers and they have high-quality connections. That is why it is able to produce fast speed. 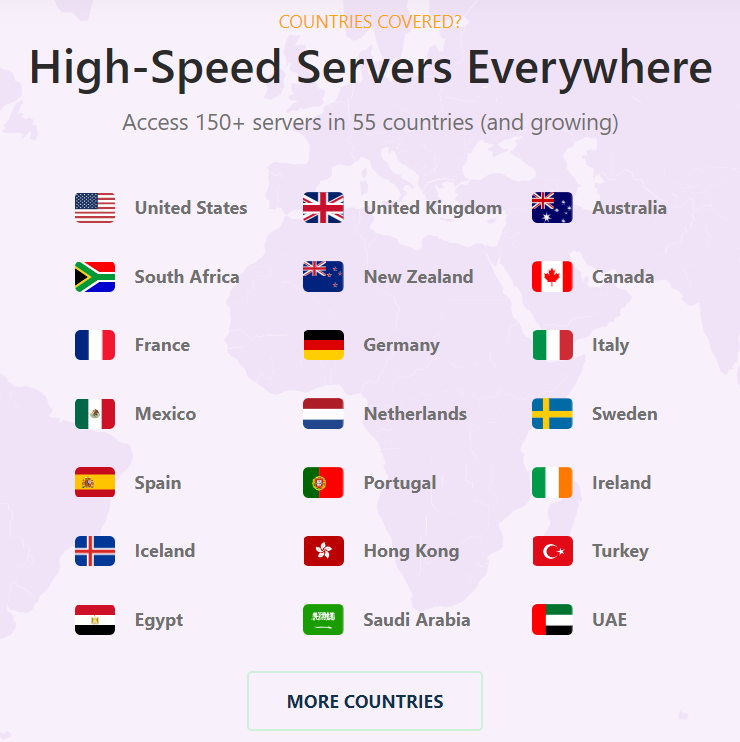 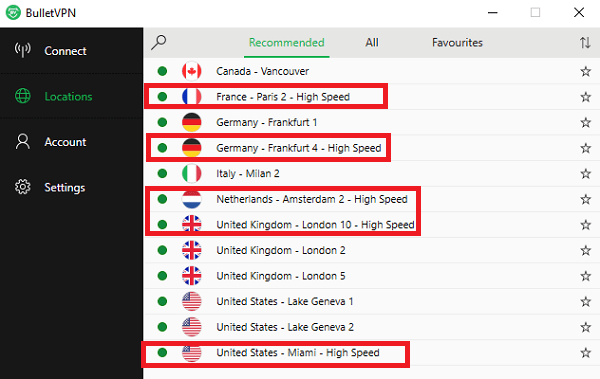 It may not have servers in China, North Korea, or similar other countries that have strict online restrictions, but it has servers in Russia. To access websites in these countries, a service provider must have obfuscated server, which I am afraid this VPN does not offer.

Speed – How fast is BulletVPN?

BulletVPN server speed is just above average. With an internet speed of 44 Mbps, I connected to BulletVPNs high-speed US and German server.

When connected to a high-speed Miami server:

When connected to the Frankfurt server:

As you can see the speed hasn’t declined by much so the speed remains just above average. Please view our speed test guide for VPNs that have fast-speed servers. You can also discover the fastest VPN services that we compiled on the basis of our tests.

Streaming –Does it work with Netflix in New Zealand?

When tested for Netflix in New Zealand, I have to say it did unblock the American Netflix library. This service provider does claim that it unblocks the streaming service and rightly so.  So, BulletVPN and Netflix do go hand-in-hand.

It did unblock iPlayer which I thought was amazing. Not only that, but it also unblocks other streaming services such as Hulu, Sky, Amazon Prime, and HBO in New Zealand.

However, it does allow you to download Torrents and it does have servers that support P2P. For example, you can connect to a Spain server that is P2P supported and start downloading torrents anonymously in New Zealand. When streaming with Kodi, it did unblock Live TV Channels that are shown under the Kodi app.

Kodi BulletVPN is the way to stream channels from across the globe in New Zealand. There are a lot of VPNs that happen to work with Kodi. Have a look at our Kodi VPN addon.

It was impressive to see that BulletVPN did NOT leak any IP. I tested for IP leaks using this IP Leak website.

I connected BulletVPN to a US server. Here is the screenshot of the results: 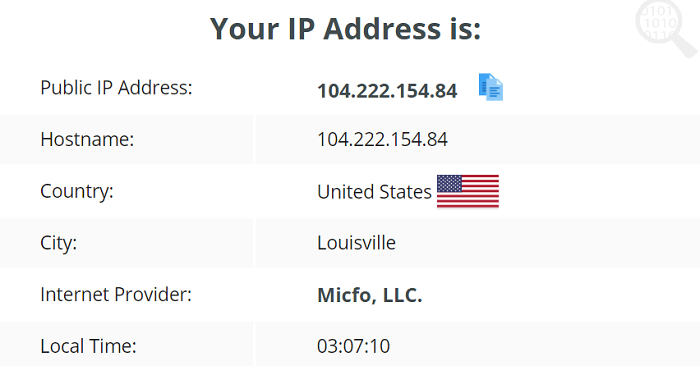 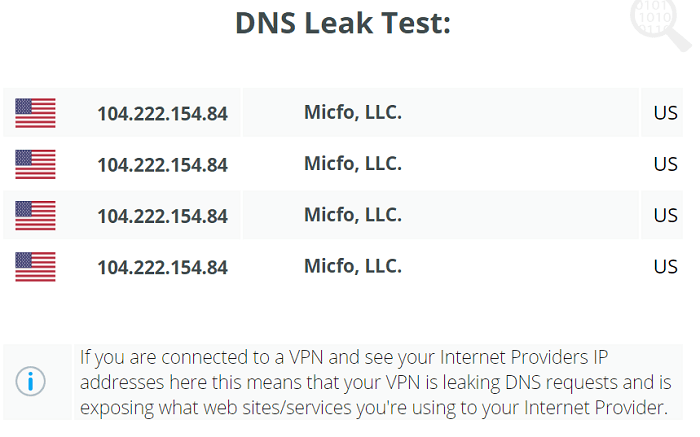 Here is our VPN leak test guide that shows which VPN leaks your IP.

To check if its Windows client or any other app is clear from viruses and malware, I scanned the file using Virus Total. I could NOT find any viruses, adware, or any kind of malware on its client.

BulletVPN does NOT collect connection logs nor does it stores usage logs in New Zealand.

We do not collect any logs of user browsing history, connection history, traffic and data transfer, or DNS queries, nor do we store VPN connection logs of any type.

If they’re not tracking your IP address, then it’s impossible to log your data in New Zealand, which is exactly what they are trying to explain.

It made it clear that:

This makes it impossible for anyone including BulletVPN to retrieve information about a specific user, date, time, source IP, and VPN server.

Now the question remains, what information do they collect to make their service better?

Only Total data consumption is collected to ensure that performance is optimized for all connected users.

I learned in this BulletVPN review that the data they collect does not violate your online privacy.

Let’s have a look at some VPNs and their logging policies.

BulletVPN customer support is really good in New Zealand. There is a 24/7 Live Chat Support and Ticketing System where you can submit tickets specific to your queries.

Also, you can email them for a response that will be made within 24-hours. I tried its live chat feature and I got an instant response within a minute.

In fact, they offered to try a free trial account for 3-days. Impressive!

You can connect up to 6 devices simultaneously with a single BulletVPN account in New Zealand.

I downloaded the BulletVPN iOS app after I was given a free trial account by their customer support. 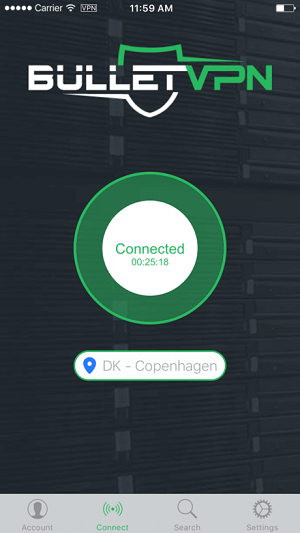 The app is slick and simple. It doesn’t take much time to connect to a server which is impressive, to say the least. 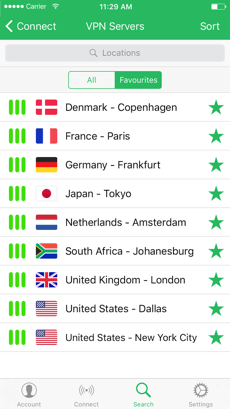 You can either connect to some favorite locations that have fast servers or you can view all locations.

BulletVPN Reviews on the Play Store in New Zealand

Let’s see what users have to say about this VPN service: 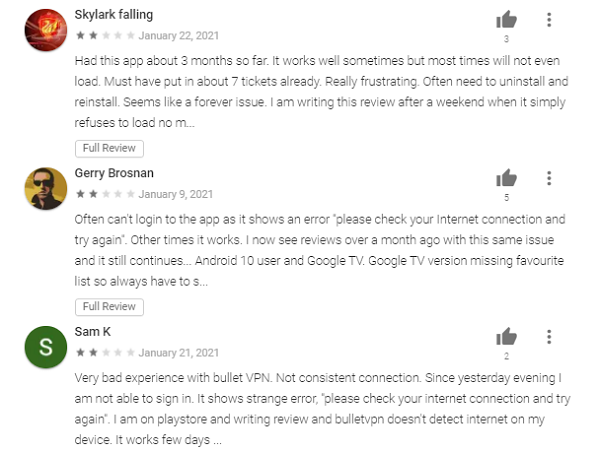 Comparison between BulletVPN and ExpressVPN in New Zealand

Here is a quick comparison between the two service providers based on their features and price. Let us know which one is best in New Zealand:

If you didn’t find any of its features attractive or you’re looking to find a better VPN. Then you may have a look at its alternatives:

Do I Recommend BulletVPN in New Zealand?

I found its interface really smooth. It had fast servers and amazing customer support. The thing I was disappointed most about was its speed. Despite being connected to its high-speed servers (Miami and Frankfurt), the speed was just above average.

If I am paying more than these top VPNs such as ExpressVPN or Surfshark, I expect to get more features otherwise it is too expensive for me. In this BulletVPN review in New Zealand, I loved the fact that it worked on all major platforms, and most importantly it does not collect logs in New Zealand.

So, if you’re going to get this service in New Zealand, make sure you download its Android, iOS, or Windows app. It has great features and it’s definitely worth your money.