But like any streaming service, Sky Sports is also subjected to geo-restrictions and cannot be accessed without a UK IP address. Therefore, using the best VPN for Sky Sports in New Zealand is the ultimate solution to this problem.

But not all VPNs work the same. Some VPNs cause too much buffering, while others don’t have reliable servers to unblock streaming websites. That’s why we have conducted thorough testing to present you with the 3 best VPNs for Sky Sports in New Zealand.

Scroll down and learn more about them:

Here’s the list of best VPNs for Sky Sports in New Zealand:

Why do You need a VPN to Watch Sky Sports in New Zealand?

You need a VPN for Sky Sports because it is only available in the United Kingdom and Ireland. This is because Sky Sports has had to restrict its content depending on location due to licensing and distribution restrictions.

If you attempt to watch Sky Sports in New Zealand without a VPN,  you will get an error message indicating that your access request has been denied. 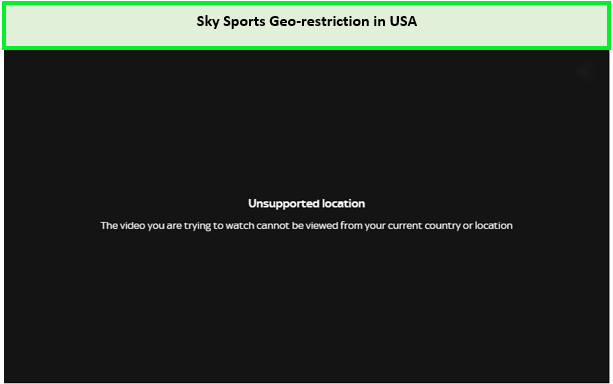 A VPn is required to get around this error on Sky Sports.

By connecting to a VPN server in the UK, users may access content that would otherwise be restricted by location. Once the VPN connection has been established, the streaming service will see the location of the VPN server instead of the user’s real location.

With a Sky Sports VPN, the user may watch shows and stream live sports events that are normally unavailable in their region.

After testing numerous VPN services in New Zealand, we shortlisted the following 3 best VPNs for Sky Sports in New Zealand. These services exhibit a perfect blend of speed, accessibility, performance, security, and compatibility with numerous devices.

Let’s discuss them in detail for better understanding:

ExpressVPN is the best VPN to watch Sky Sports in New Zealand because of its super-fast speed, top-notch security, and powerful unblocking tendencies in New Zealand. Because the service has over 3000 server locations in 94 countries, including four in the United Kingdom, you may unblock not just Sky Sports but also other famous streaming services from across the world while in New Zealand.

Using its MediaStreamer feature, we could comfortably stream Sky Sports on Apple TV after connecting to its Docklands server. 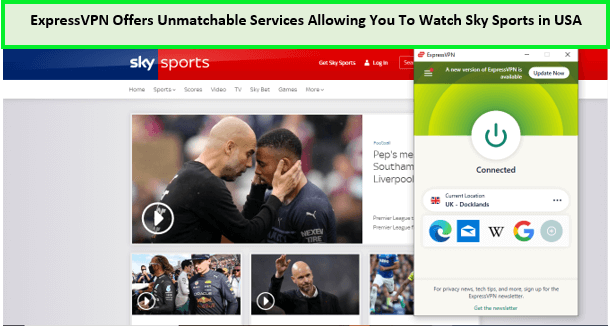 Connect to the Dockland server of ExpressVPN for fast-speed sports streaming.

These servers work brilliantly when it comes to gaining access to Sky Sports in New Zealand and various popular streaming services in the United Kingdom, such as Canal Plus, Channel 4, 7 Plus, and BT Sport in the United States. You can also watch BBC iPlayer NZ. ExpressVPN also turned out to be the Best VPN for Colorado in New Zealand.

When tested ExpressVPN for speed, it managed an upload speed of 84.64 Mbps and a download speed of 89.42 Mbps on a 100 Mbps connection, proving that it is best to enjoy uninterrupted streaming.

ExpressVPN’s speeds were blazing-fast on our 100 Mbps connection.

ExpressVPN is compatible with several devices, such as the iPhone, Mac, Windows, Android, Roku, Fire Stick, Apple TV, and Smart TV. Additionally, it offers 24/7 live chat support to its customers.

Moreover, it protects your online activities by encrypting all communications with a robust AES 256-bit encryption, preventing DNS leaks, providing a kill switch, and adhering to a no-logging policy. These protections guarantee that no one may access or read your data in New Zealand.

This VPN Sky Sports is available for NZ$10.29/mo (US$ 6.67/mo) (Get 49% Off + 3 Months FREE on its 12-Month Plan) and offers a 30-day money-back guarantee. This means you can cancel your ExpressVPN subscription and get a full refund back almost immediately.

For more details, check out our ExpressVPN review.

Surfshark is a budget-friendly VPN for Sky Sports in New Zealand. It is efficient, loaded with features, and offers unlimited simultaneous connections at a price as low NZ$3.16/mo (US$ 2.05/mo) (Get 84% + 2 Months FREE on 2-Year Plan).

It boasts a network of about 3200 servers in 100 countries, including UK servers spread across 3 locations in Manchester, Glasgow, and London. After connecting to its London server, we could easily stream live sports events on Sky Sports in New Zealand. 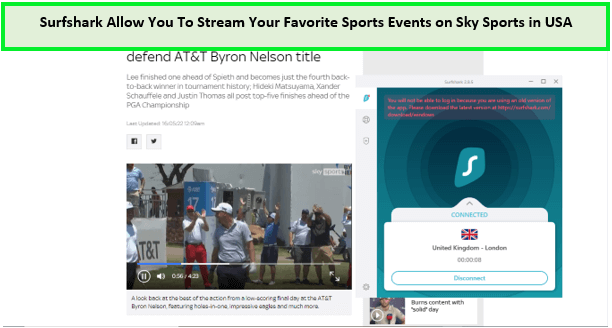 We connected to the London server of Surfshark to watch sports streaming on Sky Sports.

With its highly optimized servers in the UK, you can also unblock other UK-based streaming services, including BBC iPlayer, ITV, Eurosports, and Channel 4 NZ.

When tested Surfshark for speed, it offered a download speed of 85.42 Mbps and an upload speed of 48.64 Mbps on a 100 Mbps connection.

Surfshark’s service is fast, with a speed drop of around 15% only.

Besides Windows and Linux, Surfshark is compatible with routers, mobile devices, computers running macOS and iOS, and even video game consoles. It is compatible with various streaming devices, including PlayStation, Roku, Xbox, Apple TV, and Chromecast, and can you can also set up Surfshark on wireless network routers.

The use of Surfshark provides special protections for your data in New Zealand. AES 256-bit encryption standards, defenses against malware and phishing, a DNS leak shield, camouflage mode, a bypasser mode, and an emergency kill switch are all part of the package.

Surfshark provides live chat support to customers, along with a Surfshark free trial in New Zealand for 7 days. There is a 30-day money-back guarantee on this VPN service.

To know more about this budget-friendly VPN, read our Surfshark review.

That said, we had a tremendous experience with the NordVPN London server while streaming Sky Sports in New Zealand. 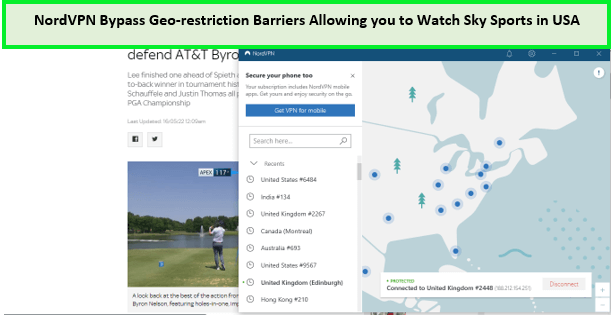 There were no buffers or delays on our connection while streaming Fox Sports with NordVPN.

Because there are so many servers in the United Kingdom, it is easy to see Sky Sports from outside the United Kingdom. You can also use NordVPN for unlocking other UK-based services like UKTV, BBC iPlayer, andBFI Player. Also, NordVPN has proven itself as the overall best VPN for MLB TV in New Zealand.

In addition, NordVPN is renowned for offering shockingly quick connections. On the NordVPN speed test, it delivered a download speed of 83.82 Mbps and an upload speed of 44.62 Mbps on a 100 Mbps connection.

These speed results are enough to stream 4k videos without encountering buffers.

A single NordVPN subscription allows simultaneous installation on up to six devices. It is compatible with the most widely-used platforms and operating systems, such as macOS, Windows, Android, iOS, Router, Linux, etc.

A notable strength of NordVPN is its emphasis on data encryption in New Zealand. This security solution includes a kill switch, 256-bit encryption, protection against DNS, IPv6, and WebRTC leaks, as well as an ad blocker and malware detection.

There are a few things that we looked at when choosing the best VPNs for Sky Sports in New Zealand. Here is our methodology:

Can I use A free VPN to watch Sky Sports in New Zealand?

Yes, you can use a free VPN to watch Sky Sports in New Zealand, but it’s not recommended. Nevertheless, many free VPNs are available over the web, which can be used, but they come with a price. Such VPNs do not only share their user’s data for their own purpose but also offer no security and protection from various malware. Such factors play a role in making these VPNs highly unreliable and unsafe to use.

On the contrary, with very fewer prices, it is always advised to use an authentic Sky Sports VPN such as ExpressVPN so that you are safe and worry less during streaming in New Zealand.

Sky Sports Not Working With VPN in New Zealand

If Sky Sports is not working with your VPN in New Zealand, here are some potential solutions you can employ to fix it.

Certain sites and applications use cookies to make your time online more convenient and productive. These files won’t damage you, but they could reveal your whereabouts if you’re not careful.

2. Change To A Different UK server

3. Upgrading To Another VPN

If you are using a free or low-quality cheap VPN, it’s time to ditch it and upgrade to something better. A good quality VPN Sky Sports in New Zealand will offer you a much more reliable connection, better speeds, and stronger security. This will allow you to stream Sky sports in New Zealand and anything else you want online without worrying about being disconnected or having your data stolen.

Moving toward the end of this guide, we would like to suggest you to refrain from some of the services listed below. Let’s find out why!

Likely, using Hola VPN on any device or browser might not result in a secure connection. The mere installation of the Hola VPN program exposes you to significant privacy and security risks. A free VPN service does not even encrypt your data in New Zealand, records practically everything you do online, has a history of security issues and vulnerabilities, and logs almost everything you do online. You can read more about this in our detailed Hola VPN review.

HoxxVPN lacks key characteristics of a reliable VPN, such as stronger encryption, a no-logging policy, faster connection speeds, and helpful customer service. We also tested it with Sky Sports, and it failed terribly. Therefore, if you want a more pleasurable VPN experience, you should switch to a more recognized service like ExpressVPN or NordVPN. Read more about this VPN in our Hoxx VPN review.

HideMyAss, one of the most dependable virtual private networks (VPNs), is renowned for its speed and use. HideMyAss has a history of gathering user data, the kill button on its servers is faulty, and the corporation has previously worked with government enforcement agencies to provide their user data without user consent. Learn more about it in our detailed HideMyAss review.

What’s The best VPN for Sky Sports in New Zealand?

No, it does not! Sky Sports has temporarily disabled ExpressVPN in an effort to prevent any breaches of its copyright and license agreements. The corporation may breach the agreements it has established with the content providers it works with if utilizing ExpressVPN is a successful approach for accessing Sky Sports outside the UK. That’s why Sky is trying to stop you from using ExpressVPN.

Is it legal to unblock Sky Sports in New Zealand with a VPN?

Yes, it is completely legal to unblock Sky Sports in New Zealand with a VPN. As you have paid for a service, and now, just because you are out of the country, you are unable to use it, using a method to access your own property is totally legal. However, you should always check the local laws before using a VPN service.

The Sky Sports platform is perfect for watching live sports events in HD quality. The only way to watch the service in New Zealand is with a VPN because the service won’t be lifting its geo-restrictions anytime soon.