Stream and follow live sports with the best VPN for Kayo Sports in New Zealand!

Kayo Sports is an over-the-top video streaming platform available in Australia. The service is home to live and on-demand programming from other sports giants like Fox Sports, ESPN, beIN Sports, and Racing.com.

But if you’re an ex-pat living in New Zealand, or traveling abroad for any reason, you will have trouble catching up on Huni vs Godwill Heavyweight battle and other upcoming sports events on Kayo Sports.

That’s because Kayo Sports is affected by geo-restrictions and can only be accessible to those with an Australian IP address. Thankfully, the best VPN for Kayo Sports in New Zealand is here to save the day by altering your virtual location and making it look like you’re accessing Kayo from Australia.

The best Kayo VPN like ExpressVPN offers fast Australian servers, compatibility with the Streamotion player, and strong security features. To help you further, we tested multiple VPN services and handpicked the 3 best VPNs that are perfect for streaming Kayo sports in HD (check out our in-depth analysis below).

Here’s the qualified list of the best VPN for Kayo sports tested in New Zealand in 2022:

Many VPN providers endorse being the fastest while others advertise having the highly-advanced unblocking technology. But how truthful are their claims?

To find this out, we conducted extensive testing of about 40+ Kayo VPN providers, assessing their speeds, security levels, and their streaming capabilities with Kayo Sports, and shortlisted the following three best VPNs for Kayo Sports streaming in New Zealand.

Let’s discuss them all in detail.

ExpressVPN is the best VPN for Kayo Sports in New Zealand for its breakneck speed results, fast Australian servers, and unrivaled unblocking power to stream geo-restricted content. It offered a download speed of 89.42 Mbps and an upload speed of 86.64 Mbps in our speed test below.

Headquartered in the Virgin British Island, ExpressVPN has around 3000+ servers in 94 countries, including plenty of Australian servers in over 5 locations including Perth, Brisbane, and Melbourne.

Upon testing, we found its Brisbane server extremely compatible with Kayo Sports, delivering outstanding streaming speeds, and amazing video quality without any buffers.

We had a remarkable streaming experience with ExpressVPN’s Brisbane server.

Among all of its traits, ExpressVPN’s MediaStreamer enables viewers to stream Kayo Sports on devices that do not have native VPN support. So, use this VPN on various devices including Smart TVs, Firestick, Roku, Xbox, or set up ExpressVPN on Roku, PS4, or Apple TV and stream live sports events on big screens.

Based on ExpressVPN speed test results, it delivered a whopping 89.42 Mbps download speed and 84.64 Mbps of upload speed on a 100 Mbps connection.

We noticed only a negligent amount of speed loss during streaming Kayo Sports in New Zealand.

As for its compatibility, ExpressVPN allows five simultaneous connections with dedicated apps for every major operating system, including iOS, Android, Windows, Linux, and more.

Need more information on this VPN provider? Check out our detailed ExpressVPN review.

Surfshark is the most budget-friendly option to access Kayo Sports. It is available at a price as low as NZ$ 3.3/mo (US$ 2.05/mo) (Get 84% + 2 Months FREE this Black Friday/Cyber Monday) with a 30-day money-back guarantee.

It delivers top-notch streaming results with 3200+ servers in 100 countries. Among which, 91+ servers are in 5 Australian locations, including Melbourne, Brisbane, and Perth.

When it comes to streaming Kayo Australia, Surfshark is another safest bet as it successfully bypassed Kayo Sports’ geo-restrictions. We could easily access the streaming platform in New Zealand by connecting to its Perth server. 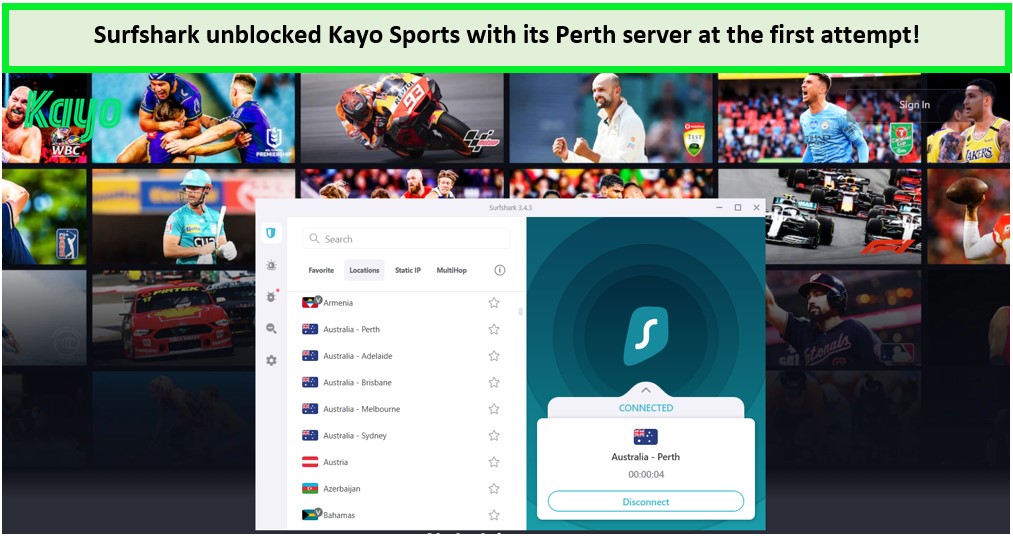 By connecting to the Surfshark Perth server, we could easily stream live videos without any buffering.

Aside from Kayo, we also tried accessing numerous other streaming platforms and it worked great with all of them in New Zealand.  Surfshark Netflix is truly a great combo for streaming as well as with HBO Max, Hulu, Amazon Prime Video, and more.

Despite being a cheap VPN, it offers unlimited simultaneous connections with one subscription which makes it the best multi-device VPN. Moreover, you get a SmartDNS feature to stream geo-restricted content on multi-players and devices that do not support VPNs.

You can easily set up Surfshark on FireStick, Routers, Roku, Smart TVs and other popular devices or install Surfshark on Apple TV to watch your favorite Kayo Sports shows on the big screen.

As far Surfshark speed test results are concerned, it delivered a download speed of 81.32 Mbps and an upload speed of 76.12 Mbps on a 100 Mbps base connection.

The drop speed rate was only 16% with the Surfshak server in Perth Australia.

The most fascinating thing about Surfshark is that it doesn’t limit your bandwidth and is compatible with all operating systems, such as macOS, iOS, Android, Smart TV, Windows, Linux, and more.

Surfshark provides utmost security and ensures your online privacy in all circumstances. Its strict no-log policy, kill switch and DNS/IP leak protection ensures that your data is not compromised regardless of wherever you are in the world.

Wait there’s more: Surfshark offers 30-day money-back guarantee to online streamers who wish to test the service before investing in it permanently. Also, Android users can also get a Surfshark’s free trial in New Zealand for 7 days.

NordVPN is the largest server network VPN to access Kayo Sports, offering 5500+ servers in 59 countries. It has around 190+ Australian servers in 5 popular cities such as Melbourne, Brisbane, and Adelaide.

We tested NordVPN Kayo Sports unblocking efficiency by connecting to the Brisbane server. It instantly accessed Kayo Sports without any errors and within 45 seconds. Commendably, its fast servers maintained speed consistency throughout our streaming session without any buffering issues. 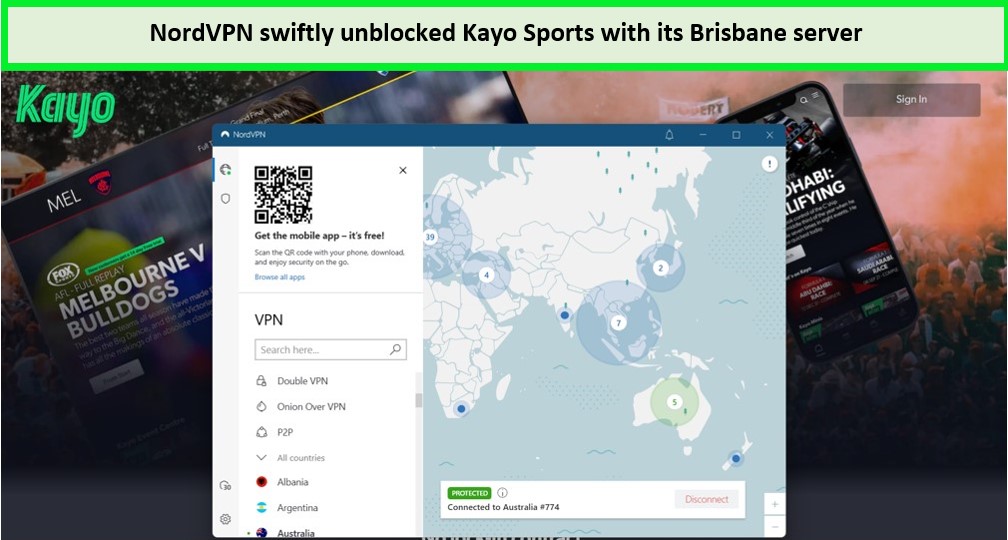 You can stream Kayo Sports on devices that might not support VPN as NordVPN has a feature for it called “SmartPlay.” It allows you to configure the VPN on multiple devices such as Apple TV, Roku, Smart TVs, PS4, Routers, and more.

As per NordVPN speed test results, it recorded a download speed of 86.18 Mbps and an upload speed of 42.13 Mbps on a 100 Mbps base connection.

These speed rates are incredible for streaming sports live without buffering.

NordVPN works great with all popular operating systems, including Windows, NordVPN for Linux, macOS, iOS, Android, and more. Also, you can enjoy six simultaneous connections on a single account.

As for security, NordVPN offers military-grade encryption, and tunneling protocols to keep your connection private without compromising the speed. Its advanced security features include obfuscation technology, a Kill switch and DNS leak protection that help prevent data leaks and offer strong security.

Overall, NordVPN is an ideal choice for streamers looking for a rare balance between security and speed. You can get it subscription at NZ$ 5.93/mo (US$ 3.69/mo) (Get 55% Off + 2 Months FREE this Black Friday/Cyber Monday) with a 30-day money-back guarantee.

If you want to learn about this VPN provider, check out our thorough NordVPN review.

Can I use a free VPN for Kayo Sports In New Zealand?

Yes, you can use a free VPN for Kayo Sports in New Zealand, but we don’t usually recommend them due to poor security measures.

Have you ever wondered; how free VPN providers make money? Well, they resort to fishy money-making tactics such as logging users’ data and trading them off to third-party advertisers. This not only jeopardizes your privacy but also nullify the core purpose of a VPN service which is to protect your online identity and privacy at all cost.

Most free VPNs lack the resources to bypass the geo-blocks placed on streaming services like Kayo Sports. With below-average encryption standards, they expose your actual location, and you end up facing the geo-restriction error even with a VPN. Not to mention, Kayo Sports has been actively blocking IP ranges associated with VPN users.

This means that once your provider’s IP addresses are blacklisted, you would need a new IP address from your provider. And, this is exactly when you face Kayo Sports not working with a VPN issue. To fix this issue, free VPN services require extra budgeting and financing, which they are clearly not capable of affording.

Therefore, we highly recommend sticking with the best Kayo VPN like ExpressVPN, which has the best resources, features, and technology to keep you protected at all times.

Here’s a brief comparison of the best VPNs for Kayo Sports that will help you choose the one that best meets your needs:

Why is Kayo Sports not working with VPN in New Zealand?

If you’re in Australia and facing an error that you can’t access Kayo in New Zealand, it may be because you’re using a Virtual Private Network (VPN). Due to licensing agreements, Kayo Sports is legally obligated to grant access to only those users who’re within Australian territories.

However, if the issue persists, we recommend following the given below troubleshooting steps.

How can I Access Kayo Sports In New Zealand?

Here’s how to watch Kayo in New Zealand using these five simple steps:

Why is access denied to Kayo Sports in New Zealand?

Kayo access denied issue is usually because of a VPN being used on your device or network. However, you may also encounter this error while accessing Kayo Sports in New Zealand or when you use an incompatible browser or device. You can fix this issue and resume streaming by simply connecting to a reliable VPN like ExpressVPN.

Does Kayo work on ExpressVPN in New Zealand?

Yes, it does! ExpressVPN is the best VPN to unblock Kayo Sports in New Zealand and anywhere abroad. This VPN has around 3000+ servers in 94 countries and plenty of optimized servers in Australia.

What VPN works with Kayo in New Zealand?

Here is the list of the best VPNs for streaming Kayo Sports in New Zealand in 2022:

Kayo Sports is a popular Australian-based sports streaming platform unavailable to viewers in New Zealand due to licensing and copyright policies. However, with the help of the best VPN for Kayo Sports, you can easily change the IP address and access the platform in New Zealand.

Based on our testing, ExpressVPN turns out to be the best VPN for Kayo sports in New Zealand, delivering outstanding streaming speed, video quality, and stability of the connection. With its speedy servers in 5 Australian locations, it lets you enjoy uninterrupted streaming on Kayo Sports in Ultra-HD playback quality.

So, are you ready to see your favorite athletes in action on Kayo Sports? Get your VPN subscription now!