3 Best VPNs for CraveTV in New Zealand [Fast and Effective] 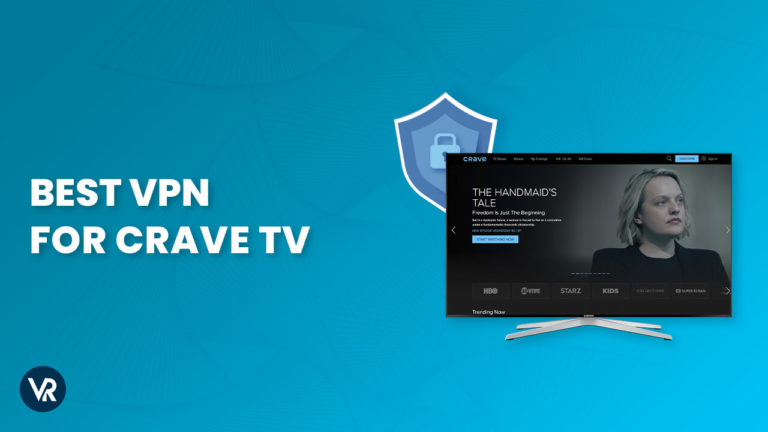 Even though the streaming platform is simply amazing, it is not available to watch in New Zealand due to broadcasting rights and licensing restrictions. Hence, the only way to get around these geo-restrictions is to use a reliable VPN.

A VPN spoofs your original location to get a Canadian IP address in New Zealand, allowing you to access Canada-exclusive OTT platforms like CraveTV in New Zealand without any issues.

For this guide, we tested 40+ VPNs on an extensive testing methodology and shortlisted 3 of the best VPN providers that are exceptional at unblocking CraveTV in New Zealand. Scroll down and learn more about Crave TV VPNs.

Choose the best VPN for CraveTV in New Zealand from the following list:

Simply put, geo-blocks prevent you from accessing CraveTV in New Zealand. So, if you watch CraveTV, you need to download and install a VPN. Without a virtual private network, you won’t be able to use your streaming device to unblock CraveTV.

While it might seem like a problem at first, a VPN makes things quite easy a lot. It helps spoof your location virtually and allows you to watch Crave TV in New Zealand.

And if you try to watch Crave TV without a VPN, you’ll be prompted by an error message saying: 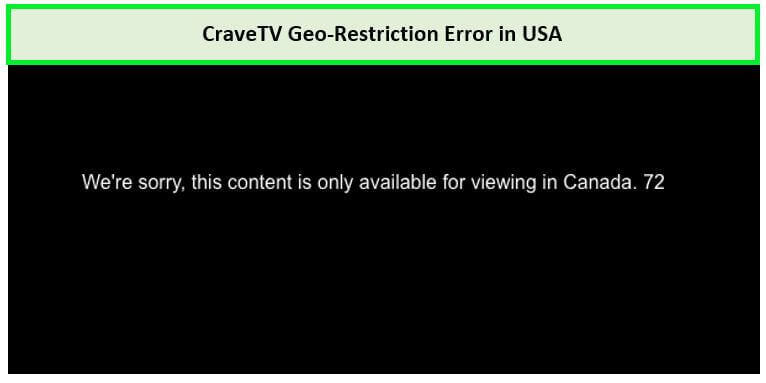 “We’re sorry, this content is only available for viewing in Canada. 72”

The simplest explanation is that they must adhere to licensing, copyright, and distribution agreements that otherwise prohibit them from accessing the content from form abroad. Will that change in the future? We don’t know.

But what we do know is that even if the content is blocked, that doesn’t mean you need to worry too much. All you need to do is get the best VPN for CraveTV in New Zealand that allows you to bypass the geo-blocking and access CraveTV and its content library.

We tested 40+ VPNs and came up with these three VPN providers. They offer the perfect blend of speed, server versatility, consistency, features, security, and privacy that we believe will help you access CraveTV in New Zealand without any trouble. Let’s take a look:

ExpressVPN is the best VPN for CraveTV in New Zealand, which has established itself as a versatile VPN, delivering top-notch speed and unblocking capabilities.

It has a fleet of 3000+ servers in over 94 countries, including numerous servers in three locations in Canada, based in Montreal, Vancouver, and Toronto. We connected to its Toronto server and could unblock Crave TV almost instantly. 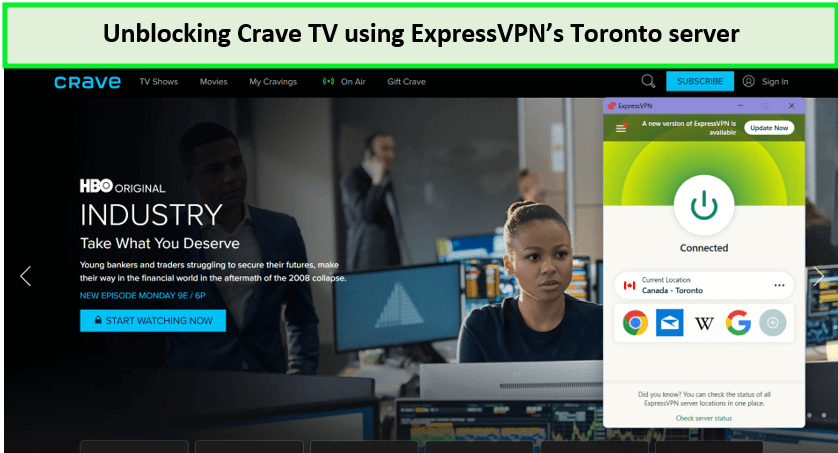 We continued binging all our favorite series on CraveTV in HD quality.

As per the ExpressVPN speed test on the server we were connected to, the VPN offered a download speed of 89.38 Mbps and an upload speed of 84.66 Mbps on a 100 Mbps connection.

We faced a speed drop of almost 11% on our connection, which was fantastic.

Widely regarded as the best streaming VPN in New Zealand, it can also unblock other popular services it is also best VPN for Voot, SonyLIV, ITV, and BBC iPlayer in New Zealand.

As for security, you get a variety of features, including AES 256-bit encryption, no-logs, TrustedServer technology, and more.

If you decide it’s not the right fit for you, you can cancel your ExpressVPN subscription within 30 days and claim your refund almost immediately.

Go through our detailed ExpressVPN review for more detailed insights.

It boasts a network of 3200 servers in 100 countries, with an impressive 126 Canadian servers spread across Toronto, Vancouver, and Montreal. We connected to its Vancouver server and found it perfectly working with CraveTV. 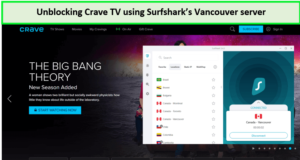 With laudable speed and consistency, we enjoyed binging “The Big Bang Theory” in HD quality.

Testing on Canadian servers, the Surfshark speed test recorded a download speed of 81.32 Mbps and an upload speed of 76.12 Mbps on a 100 Mbps connection.

Using these speeds, we faced no issues accessing CraveTV in New Zealand.

Besides CraveTV in New Zealand, we also used Surfshark to unblock multiple streaming services like 10 Play, Paramount Plus, BBC iPlayer, Optus Sports, and Hotstar in New Zealand. Surfshark is also known to be the best VPN for CITV, the plus point about Surfshark is that it offers unlimited simultaneous connections and is compatible with all major operating systems like macOS, FireOS, Linux, Windows, and iOS. Moreover, you can set up Surfshark on Roku, Apple TV, Smart TV, and Nvidia Shield are available.

In addition to being the cheapest VPN for Crave TV in New Zealand, all of its pricing packages are supported by a 30-day money-back guarantee. New mobile subscribers are also entitled to a 7-day free trial of Surfshark in New Zealand.

If you still want to know more about this VPN, check out our Surfshark review.

NordVPN offers the largest server network for Crave TV, boasting a network of 5500 servers in 60+ countries. 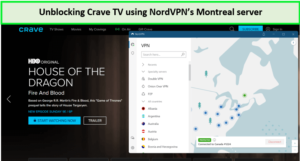 We could stream various CraveTV Originals with NordVPN in New Zealand.

While testing NordVPN for speeds, it delivered a download speed of 86.18 Mbps and an upload speed of 42.13 Mbps on a 100 Mbps base connection.

Using these speeds, we could enjoy all CraveTV content easily in New Zealand.

With its extensive server network, you can also unblock Channel 4, BBC iPlayer, Kayo Sports, BT Sport, and Voot in New Zealand. It is also the best VPN For YTV in New Zealand.

Moreover, NordVPN supports up to six simultaneous connections with applications available for Windows, iOS, Linux, and Android. This means you can also use NordVPN on Firestick, Smart TV, smartphones, game consoles, Chromecast, and other devices.

How to Choose the Best VPN for CraveTV in New Zealand

Here are the factors that you should consider before choosing the best CraveTV VPN in New Zealand:

Can I Unblock CraveTV with a Free VPN in New Zealand?

Yes, you can unblock CraveTV with a free VPN in New Zealand, but we recommend that you don’t. Not only are free VPNs unreliable and slow, but they are also highly unsecured in New Zealand. Moreover, they contain malware, such as keyloggers, that track everything.

You also can’t be sure that they are encrypting your data properly in New Zealand. Many free VPNs out there are highly malicious and have even been found to sell client data to third parties, making them highly unreliable.

This is why, instead of a free VPN, we recommend opting for a premium VPN with a 30-day money-back guarantee, so you can enjoy the VPN risk-free for a month!

Crave TV Not Working with a VPN in New Zealand?

If your Crave TV not working with a VPN in New Zealand, it’s likely because your VPN-provided IP address has been blocked. There’s no need to worry, though. Here are some quick fixes you can try to resume your CraveTV streaming in New Zealand again:

2. Connect to a different Canadian server

You cannot watch CraveTV anymore as the streaming platform has blacklisted your VPN’s IP address. If you switch to a different server in Canada, you’ll be provided with another IP address. Since this IP address may have not been blacklisted by CraveTV, you’ll be able to continue watching its content in New Zealand.

3. Upgrade to a better VPN:

VPNs to Avoid while Accessing CraveTV in New Zealand

Not every VPN is a great choice for CraveTV. We only recommend the best CraveTV VPNs in New Zealand mentioned above because we have extensively tested them. However, we also found a few VPNs that you should definitely avoid. They are as follows:

How does Crave detect my VPN in New Zealand?

Crave combines with GeoIP databases, such as Maxmind, to detect IP addresses. If the IP provided by your VPN is on any of these databases, Crave will discover where you’re connecting to worldwide and will block you.

Is it legal to watch CraveTV with a VPN in New Zealand?

Yes, it’s absolutely legal to watch CraveTV using a VPN in New Zealand. Though it might go against CraveTV’s Terms of Service, it isn’t illegal as such.

Can I stream in HD while using a Crave VPN in New Zealand?

Does ExpressVPN work with CraveTV in New Zealand?

CraveTV houses an amazing library full of popular movies and TV shows. However, it’s unavailable to stream in New Zealand due to geo-restrictions.

But you don’t need to worry as you’ll only need a VPN to bypass these restrictions. If you are looking for the best VPN for CraveTV in New Zealand, your best bet is one of the three VPNs listed above. Which one you choose is up to your preference, but all three are brilliant and world-class options.

However, if you ask us, then we’d highly recommend ExpressVPN, thanks to its servers in multiple Canadian locations, blazing-fast speeds, and top-notch unblocking capabilities.