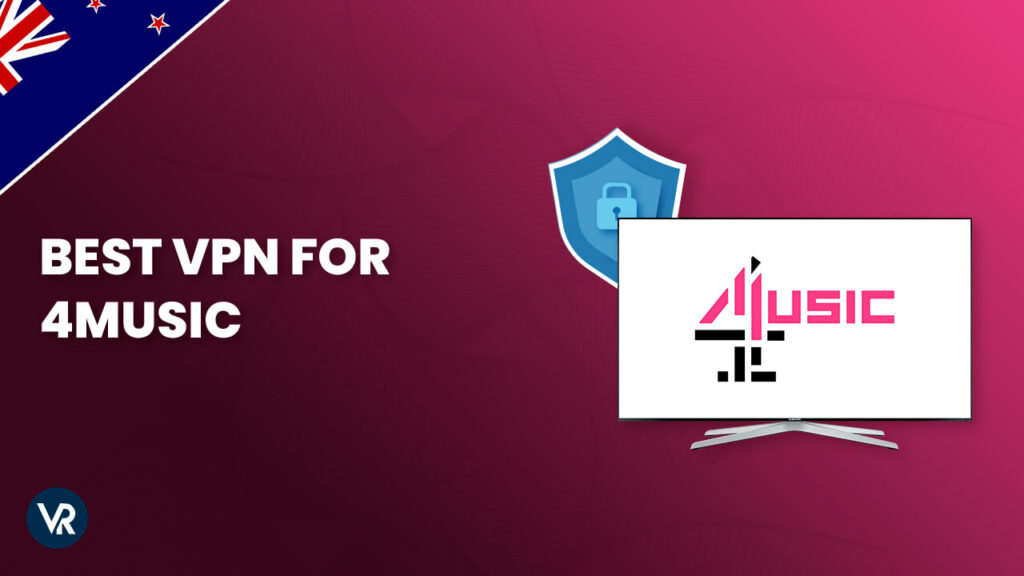 Have you ever gotten last-song syndrome with 4music, and it’s stuck in your head? We feel you. 4Music is a British music channel that provides the best music, music videos, and entertainment in one avenue! Enjoy exclusives from 4Music’s latest Videos, The Hotmix, and UKHot40.

But how do you gain a UK address and virtually change your location from New Zealand to the UK for 4music streams? EASY. Sign up for the best VPNs for 4Music in New Zealand today to get your music bug fixed.

We’ve kept a tally of the best VPN for 4Music in New Zealand through a series of tests. The top-ranking VPNs as of 2022 are the following:

Why You Need a VPN for 4Music in New Zealand

You need a VPN for 4Music in New Zealand because it’s geo-restricted. 4music is owned by Channel 4, a British streaming company. Consequently, it broadcasts its content in the United Kingdom, and only residents of the UK can watch it.

Upon accessing the channel from New Zealand, we received the following geo-restriction error:

“The video you are trying to watch cannot be viewed because of domain restrictions.” 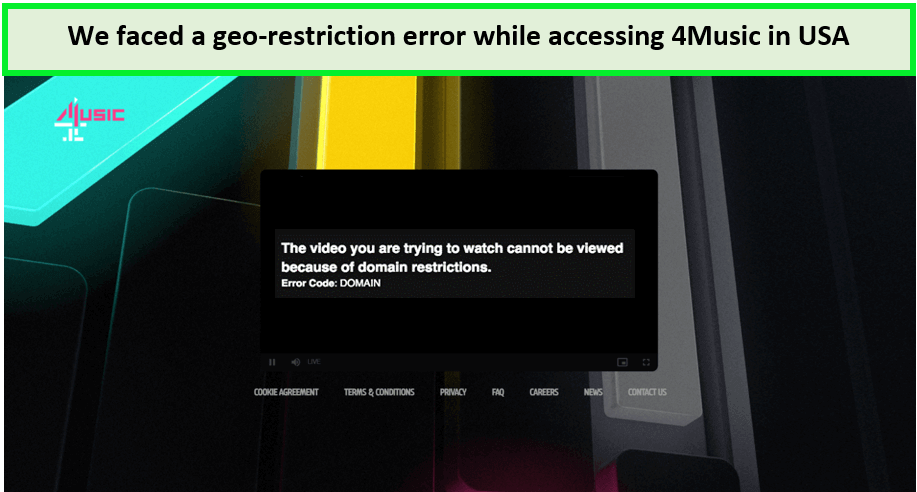 If you access 4Music in New Zealand, you’ll receive this geo-restriction error.

It is geo-restricted for everyone living outside of the British Isles because it does not hold the appropriate rights to broadcast its content in every part of the globe. That’s way too expensive and almost impractical on the part of channel networks like Channel 4.

A VPN is thus required to bypass the geo-restrictions. With the VPN’s UK servers, users can virtually change their locations and pretend to be streaming from the United Kingdom.

Working in an industry where VPN is vital to our daily efficiency, we understand your needs regarding 4music streaming, too. For the best VPNs for 4music in New Zealand, we tested security, dependability, servers, performance, and buffer-free streaming.

ExpressVPN performs excellently in all of these areas. Let’s begin with our detailed analysis of this number 1 VPN.

1. ExpressVPN – The Best VPN for 4Music in New Zealand

ExpressVPN offers 3000+ servers in 94 countries. With 4 server locations in the UK, you can listen to premium music on your couch or while on the road.

When tested, we could watch the latest top 10 music in the UK after connecting to an Express UK server. What’s even more amazing is that you don’t need to manually pick up a location, as ExpressVPN does the work for you by automatically connecting you to the fastest server available in real-time.

MediaStreamer and smart DNS tool are among the best features of ExpressVPN in unblocking international distribution limits. We connected to ExpressVPN’s London server and were easily able to unblock 4Music in New Zealand and got to watch the channel live: 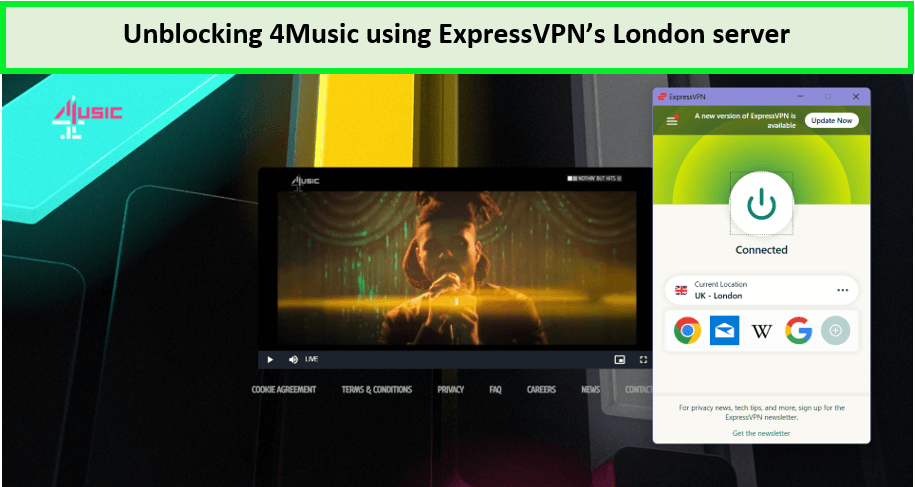 ExpressVPN servers proved themselves to be fast and efficient while accessing 4Music in New Zealand.

ExpressVPN on Spotify, Apple Music, and YouTube TV also works exceptionally well. Whatever vibe or feel you’re into, you can feed them all through ExpressVPN due to its ability to also unlock streaming platforms like France TV in US,  ExpressVPN on Netflix, Hulu, BBC iPlayer in New Zealand, Paramount Plus, HBO Ma, and Vudu. Other than that ExpressVPN is also works well with other foreign music apps like QQ Music, in  fact it is the best VPN for QQ Music in New Zealand. We also tried this VPN with Sky GO and it worked like the true best VPN for Sky Go in New Zealand

On our ExpressVPN speed test on a regular connection, ExpressVPN outperformed most providers with its 89.42 Mbps download speeds and 84.64 Mbps upload speeds.

Using these speeds, we didn’t even notice VPN usage on the connection.

For your 4music streaming in New Zealand, ExpressVPN provides unrestricted streaming bandwidth with an allowance of 5 simultaneous connections completely free from buffers and poor-quality music videos.

ExpressVPN supports and easily sets up all of your devices. Therefore, once you’ve downloaded it, you can seamlessly connect to 4music in New Zealand and other services from your laptop, smartphone, or tablet. 4music is compatible with all operating systems so you can use it through ExpressVPN on Android, Mac, Windows, iOS, Edge, and Linux. You can also configure any of your available devices to a router that is running the ExpressVPN app.

For security, ExpressVPN tailors its system with AES 256-bit keys for best-in-class encryption, a network kill switch, no-log policy, split tunneling, and many more. When we accessed 4music in New Zealand using this VPN, there were no security breaches– credit goes to its ability to detect and alert you with IP, DNS, and WebRTC leaks.

Start this amazing journey with ExpressVPN for only NZ$10.3/mo (US$ 6.67/mo) (Get 49% Off + 3 Months FREE on its 12-Month Plan). Packed with features like no other, it also has VPN staple extras like a 30-day money-back guarantee, ExpressVPN free trial in New Zealand for 7 days on a mobile device, and professional 24/7 live chat support.

For more details about the VPN, go through our in-depth review of ExpressVPNNZ.

Surfshark provides the most budget-friendly price by offering its subscriptions at NZ$3.17/mo (US$ 2.05/mo) (Get 84% + 2 Months FREE on 2-Year Plan). It’s rather common that long-term plans cost way cheaper than the monthly option. But Surfshark is built differently– as it offers affordable pricing and doesn’t compromise on the quality of services.

Due to this affordable plan, Surfshark has been the go-to VPN that is hyped by cyber experts, as well due to its rich features.

With its MediaStreamer, smart DNS tool, Sursfshark has over 3200 servers spread over 100 countries with 4 servers in UK cities; Surfshark enables international access to home-grown movies and shows only available in specific locations. 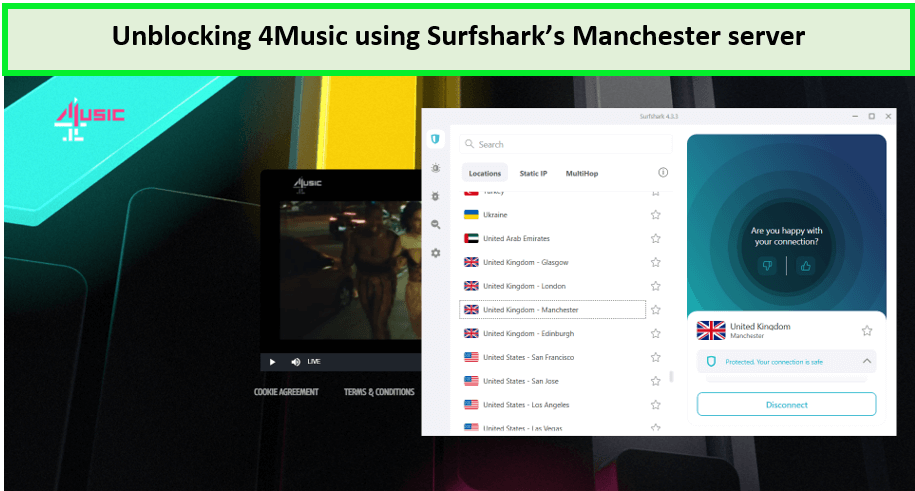 Using Surfshark servers, we were easily able to bypass geo-restrictions placed by 4Music.

Surfshark easily connects with platforms such as CITV in US, Netflix, Quest, STV Player, Hulu, Sky Sports in NZ, and other UK networks and websites such as Surfshark with ITV in NZ and CITV.

With Surfshark in New Zealand, we faced no lags while streaming in New Zealand. Our Surfshark speed test also revealed that the VPN delivered a swift download speed of 81.32 Mbps and upload speeds of 76.12 Mbps.

We faced a speed drop of only 19% using this VPN.

With only one plan, you can stream on as many devices as you may have due to its unlimited simultaneous connections in unrestricted bandwidth for HD music TV streaming in New Zealand. Surfshark app versions available for 4Music  on demand are Surfshark on Windows, iOS, Edge, and Linux, ensuring that your music streaming is never interrupted. You can also install Surfshark on a router and enjoy its connection on all devices.

Surfshark, like ExpressVPN, is concerned with user security. This VPN keeps no online logs. It also has 256 keys AES encryption, Multi-Hop, web clean, Whitelister, and Camouflage mode– all contributing to privacy.

For more details about the VPN, go through our in-depth review of Surfshark.

NordVPN has the largest server network VPN for 4music and other UK platforms in the US. It offers over 3000 servers spread across 60 countries, including 440+ servers that you can utilize for accessing blocked materials.

With its vast networks and broad reach, you won’t miss out on your local shows, music, and entertainment with it. We were easily able to bypass geo-restrictions and catch the live stream on 4Music in New Zealand using NordVPN’s Edinburgh server. 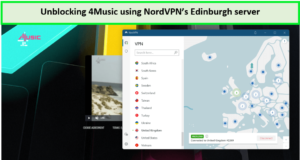 NordVPN servers allowed us to unblock 4Music in New Zealand using a variety of servers.

With NordVPN in New Zealand, you can watch Netflix, CITV Hub, BBC, and Channel 4 NZ. And it is one of the best VPN for STV Player. Moreover, music streaming platforms like Spotify UK also work with NordVN when streaming from New Zealand. With this server you can unblock Ukrainian streaming services like ICTV, Rada TV, Ukraina 24, OstWest, with a reliable VPN to get a Ukrainian IP address in New Zealand.

Our NordVPN speed test on a 100 Mbps connection delivered a download speed of 83.82 Mbps and an upload speed of 44.64 Mbps.

We faced no issues while streaming 4Music with these speeds.

Data usage is unrestricted for NordVPN’s six (6) simultaneous connections. Thus ensuring ultra HD audio and music videos. NordVPN, a Panamanian service provider, is ideal for unblocking British TV channels on the internet without fear of the government’s prying EYES. It is a service with exceptional security features, attracting people who want complete privacy to use it.

We could also set up NordVPN on Roku, Kodi, Firestick, routers, PS4, and more. On the other hand, is required for other smart home devices with which it is compatible.

If “4music not working in New Zealand” persists despite connecting with NordVPN, try connecting to another UK server or contact its support team for troubleshooting instructions.

For more details about the VPN, go through our in-depth review of NordVPN NZ.

Testing Methodology: How we find the Best VPN for 4Music in New Zealand

I know what you’re thinking: “How do you know the best VPN for 4music in New Zealand?” how sure can we be, right? Well, when assessing VPN, we consider its resources, ease of use, functionality, and stability.

The VPNranks team employs these dynamics. Survival of the fittest, elimination of the unfit. Let’s take a look at our methodology:

Can We Use a free VPN for 4music in New Zealand?

Yes, using a free 4music VPN in New Zealand is at your disposal. But as VPN and cyber experts, we highly discourage the idea.

They are everywhere on the internet, so they are “convenient” but never effective for 4music needs. Free VPN for 4music in New Zealand typically offers a limited set of features and functionalities. They exist primarily as sample “fronts” to give you a glimpse of how VPN works but not how VPN exceptionally provides services. Long story short, they offer minimum functionality, barely enough to access limited materials.

What’s worse is that you encounter malware attacks and data trading using free VPNs in New Zealand. The question is: “would you risk it?” The answer is yours to make. We recommend ExpressVPN for the 4music app because of its tight security features.

Is 4Music free-to-air with VPN in New Zealand?

No, 4Music is not a free-to-air channel with a VPN in New Zealand as it is now free to view after a change  in satellite frequency transponder. But it’s only available in the UK. To view 4Music in New Zealand, you must use a VPN such as ExpressVPN, which has the largest number of UK servers.

Can we access 4Music on now TV with a VPN in New Zealand?

Yes, 4music can be found on NOWTV, and you can stream it directly on your device using a VPN if you’re living in New Zealand. To access its contents, you must have to connect to a UK server.

How to Stream 4Music with Smart DNS Proxy in New Zealand?

4Music provides vibrant music and music videos in the UK. It is owned by Channel 4 UK and is distributed by Freeview, Youview, Freesat, Virgin TV, and Sky TV.

Regrettably, 4Music is only accessible in the United Kingdom. When going abroad, you’ll need to use a premium VPN to stream 4Music in New Zealand.  Select ExpressVPN, the Best VPN for 4Music in New Zealand (and other countries), and simply connect to its UK servers. Sing at the top of your lungs and dance blissfully without interruptions with ExpressVPN.