Best VPN For Zattoo in US [100% Fast and streaming Effective]

Unlock a plethora of live television channels with the best VPN for Zattoo!

The only problem is that Zattoo is geo-restricted and accessible to only those with a German IP address. Then, where is Zattoo available?  TV streaming with Zattoo is only available for viewers in Switzerland, Germany, and Austria. So, even if you have a Zattoo account and trying to access it in the US, you will encounter an error message reading:

“Zattoo is not available in your country.” 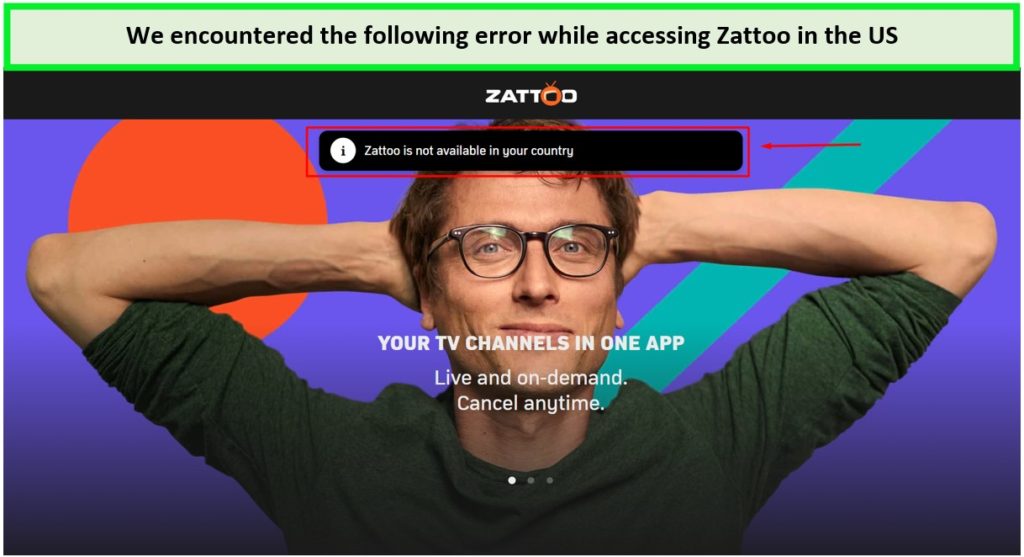 VPN is the only tool that can bypass this error Zattoo.

The only way around these geo-restrictions and watching Zattoo in the US is by using a reliable VPN. Virtual Private Network (VPN) hides your actual location by encrypting your traffic and tunneling it through an intermediary server located in Germany. This makes you seem like you’re actually accessing from Germany even if you’re in the USA. However, not all VPNs can pull this job effectively!

Therefore, we have tested and assessed numerous VPN services to present you with the best VPN for Zattoo:

Quick Overview – 3 Best VPN for Zattoo in the US

Your search for the best VPN for Zattoo is over! Check out our list of best VPNs for Zattoo tested in July 2022:

Is your current VPN not working with Zattoo?
Jump straight to see the solutions.

3 Best VPNs for Zattoo Play in the US [Detailed Analysis]

To provide you with the best VPN for Zattoo, we tested multiple VPN services according to our testing criteria and shortlisted the 3 most effective VPNs to watch Zattoo in the US. All these VPNs are effective against geo-blocking and provide a buffer-free streaming experience on all of your preferred devices.

1. ExpressVPN – Best VPN for Zattoo in the US

ExpressVPN is the best VPN for Zattoo – also best RTL+ VPNs in USA, thanks to its extraordinary unblocking capabilities, top-notch security, and remarkable speed (its speed results are self-explanatory). It features a network of 3000 servers in 94 countries, including numerous servers across 2 major cities in Germany.

When connected to its Nuremberg server, we got instant access to Zattoo without any issues. Speed, consistency, video quality, and everything was top-notch as we continued streaming “CNN HD” via Zattoo. 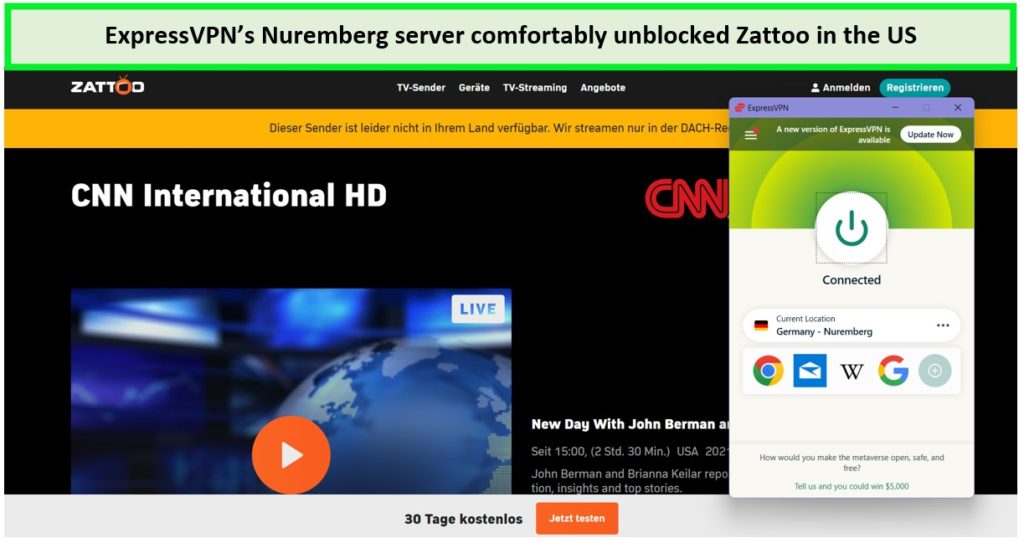 We had an amazing streaming experience with ExpressVPN’s Nuremberg server.

Not just Zattoo, ExpressVPN also lets you unblock various Germany-based streaming services such as German Netflix, Amazon Prime, WOW, Sky Q, Rakuten TV, and more. In fact, you can use ExpresVPN to unblock TF1, BFI Player, 4Music In USA, and Sky Sports in the USA. Its MediaStreamer feature is a remarkable streaming feature that allows users to watch geo-blocked titles on devices without VPN support like Roku, Apple TV, PS4, and other gaming consoles.

Moreover, with so many advantages that ExpressVPN offers, it is also turned out to be the best VPN for EuroSport and other channels like Kayo sport, Hotstar, Showtime, Crackle, Viki, and many more.

ExpressVPN speed test showed impressive results, recording a whopping download speed of 89.42 Mbps and an upload speed of 84.64 Mbps on a 100 Mbps base connection.

These speed results are enough to load 4k videos without buffering.

Along with five simultaneous connections per account, ExpressVPN offers compatible apps for devices that support macOS, Linux, iOS, Android, and Windows. This allows you to install ExpressVPN on Samsung TV, Firestick, Kodi, smartphone, laptop, tablet, or any other devices you want.

ExpressVPN is also great on the security front, offering remarkable features such as AES-256-bit encryption, protection against log shell vulnerability, a kill switch, and more. You can get its subscription for $6.67/mo (Get 49% Off + 3 Months FREE on its 12-Month Plan) with a 30-day money-back guarantee. This gives you an entire month to cancel the subscription and get your refund in case you’re unsatisfied with its services. For more details, you can check our thorough ExpressVPN review guide.

Surfshark is the most budget-friendly Zattoo VPN in the market, boasting a price as low as $2.05/mo (Get 84% + 2 Months FREE on 2-Year Plan) with a 30-day money-back guarantee. It has a network of 3200 servers in 100 countries, with multiple servers across 2 German locations. 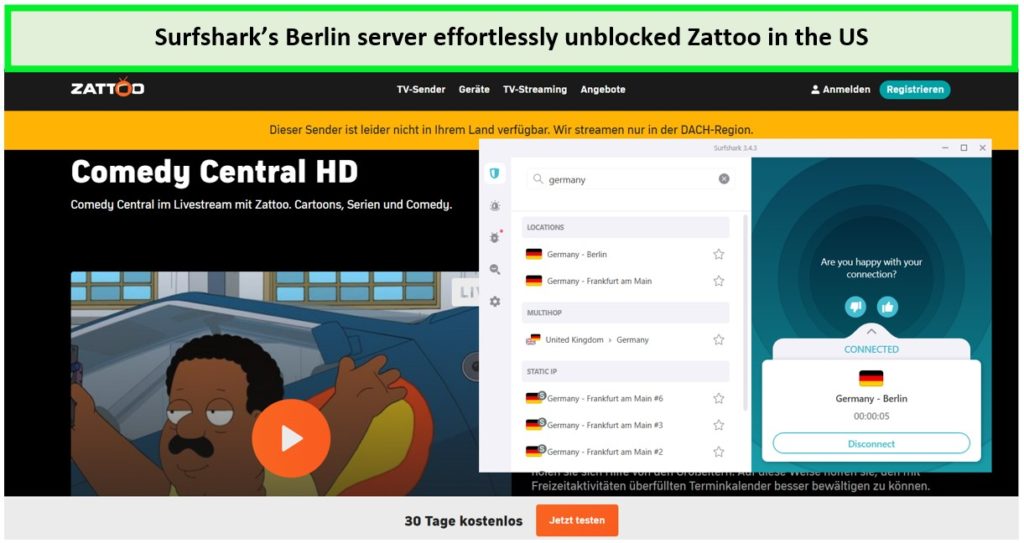 Besides Zattoo, Surfshark also unblocks American Netflix and other foreign streaming services like Hulu, Mitele in US, Globosat in US, HBO Max, Crackle, SBS World News in the USA, and VRV. Its SmartDNS feature lets us Surfshark on Apple TV and is more convenient for big-screen streaming.

As per Surfshark speed results, we witnessed a download speed of 85.42 Mbps and an upload speed of 48.64 Mbps on a 100 Mbps base connection.

The speed reduction was so minimal that you could hardly notice.

The best thing about Surfshark is you get unlimited simultaneous connections with device support for iOS, Windows, Linux, macOS, and Android operating systems. This means you can use Surfshark on Kodi, Firestick, smartphones, PC, laptops, Smart TVs, Nviadia Shield and any of your preferred devices.

For security, Surfshark offers impressive security features like AES-256-bit encryption, Multi-Hop, WhiteListers, Kill switch, and full-proof protection against IP/DNS leaks. With mobile users entitled to a 7-day free trial, Surfshark is definitely a cheap VPN to stream Zattoo in the US. If you want to learn more about its features, don’t forget to read our detailed Surfshark review guide.

3. NordVPN – Largest server network VPN to watch Zattoo in the US

NordVPN has the largest server fleet in Germany and abroad, making it an ideal choice for streaming Zattoo in the US. To be exact, it has around 5500 servers in 60 countries, including 240+ servers are in Germany alone. Even if the streamer manages to block one of its servers (that’s really unlikely, though), you will still have plenty of servers at your disposal to stream Zattoo in the US.

Upon testing, we found its Frankfurt server more effective at bypassing Zattoo’s geo-restriction. With impressive speed and consistency, we could comfortably stream live programming from Euronews via Zattoo in HD quality. 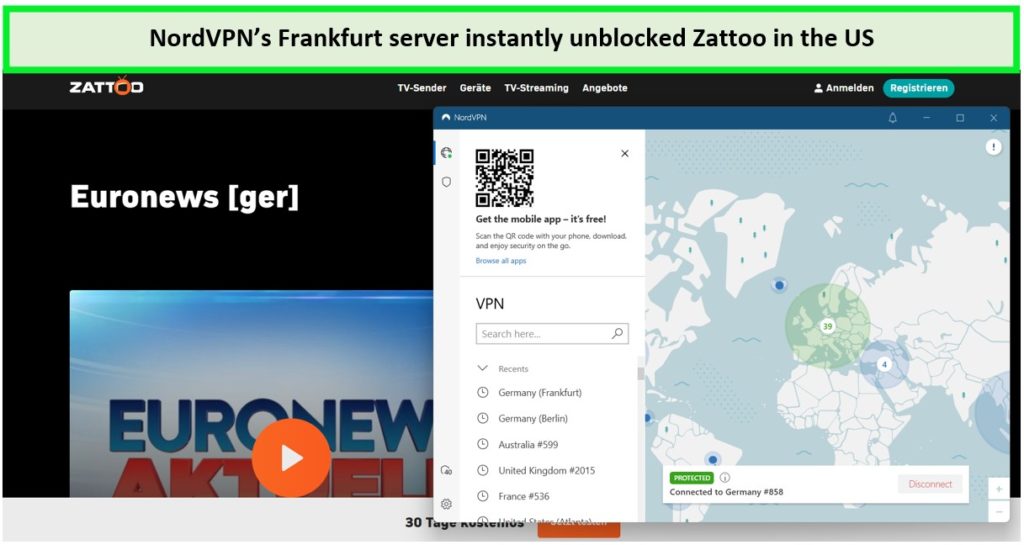 Powered by impressive unblocking strength, NordVPN can also unblock various other popular streaming services like DSTV Now in US, Crackle, Hbo Max, and Hulu. We also tried unblocking Netflix with NordVPN and got commendable results. Its SmartPlay feature helps set up NordVPN on PS4, enabling you to stream Zattoo on the big screens.

Talking about its speed, the NordVPN speed test indicated a download speed of 86.18 Mbps and an upload speed of 42.13 Mbps on a 100 Mbps base connection.

These speed results can deliver 4k video streaming without any lags or buffers.

NordVPN’s support for a broad range of operating systems such as Windows, macOS, Linux, iOS, and Android is also one of the reasons why we regarded it so highly in our NordVPN review. With its user-friendly apps, you can use NordVPN on Firestick, Smart TVs, smartphones, laptops, and tablets to media players like Kodi.

In addition, NordVPN is probably the most secure VPN we’ve ever evaluated, offering top-notch encryption, a strict zero-logs policy, and proven protection against IP/DNS leaks. Plus, you will get unlimited bandwidth with six simultaneous connections per account worth $3.49/mo (Get 57% Off + 3 Months FREE on 2-Year Plan) with a 30-day money-back guarantee. New subscribers can also get a  7-day free trial.

Methodology: How we evaluate the best VPNs for Zattoo

Plenty of VPNs offer servers in Germany where Zattoo is available, but some simply aren’t worth your money or time. We’ve identified the best VPNs for Zattoo by ensuring they meet the following important factors:

If you’re looking for a VPN that meets the above criteria and goes the extra mile to provide the best Zattoo experience, ExpressVPN is your best bet!

Zattoo not working with VPN: How to fix it

One of the effective ways to fix Zattoo not working with VPN is clear your cookies. Often intended to improve users’ experience on the website, these stored cookies can sometimes give away your actual location to the website owner, causing Zattoo to stop working even when you’re connected to VPN. Therefore, clearing your cookies or deleting any existing browser history before logging into Zattoo with a VPN is advised.

If the issue is still persistent, try implementing the following fixes:

How to use a VPN to watch Zattoo – [Easy Step]

Here’s how to watch and set up a VPN for Zattoo TV:

Is Zattoo available in the USA?

No, Zatto is currently available in Germany, Switzerland, and Austria. However, you can still watch Zattoo in the USA using a reliable VPN service, like ExpressVPN.

What devices can I use to watch Zattoo with VPN?

You can stream Zattoo with VPN on various devices, including Windows, iOS, macOS, Amazon Fire TV Fire Stick, and Android TV. You can also set up a VPN on a router to watch Zattoo on consoles, Chromebooks, Roku, and other devices.

No, ExpressVPN does not come with a Zattoo account. You’ll have to sign up for a Zattoo free account separately if you want to access its massive content library. However, you can connect to ExpressVPN for a secure connection and have a buffer-free streaming experience.

Zattoo is a TV streaming service offering access to 200+ live television channels on various devices. It currently operates in Switzerland, Spain, Denmark, Germany, the UK, and France and is in the process of expanding to the USA. Meanwhile, you have to rely on VPN services to watch Zattoo in the US.

For your ease, we have tested multiple VPN providers and shortlisted the top 3 VPNs more suitable for streaming Zattoo in the US. Among them, ExpressVPN tops the list as the best VPN for Zattoo, providing extraordinary streaming speed, top-notch video quality, and profound security.

So, are you ready to stream your favorite channels on Zattoo? Get your VPN subscription now!