The Best VPN With Split Tunneling in 2022 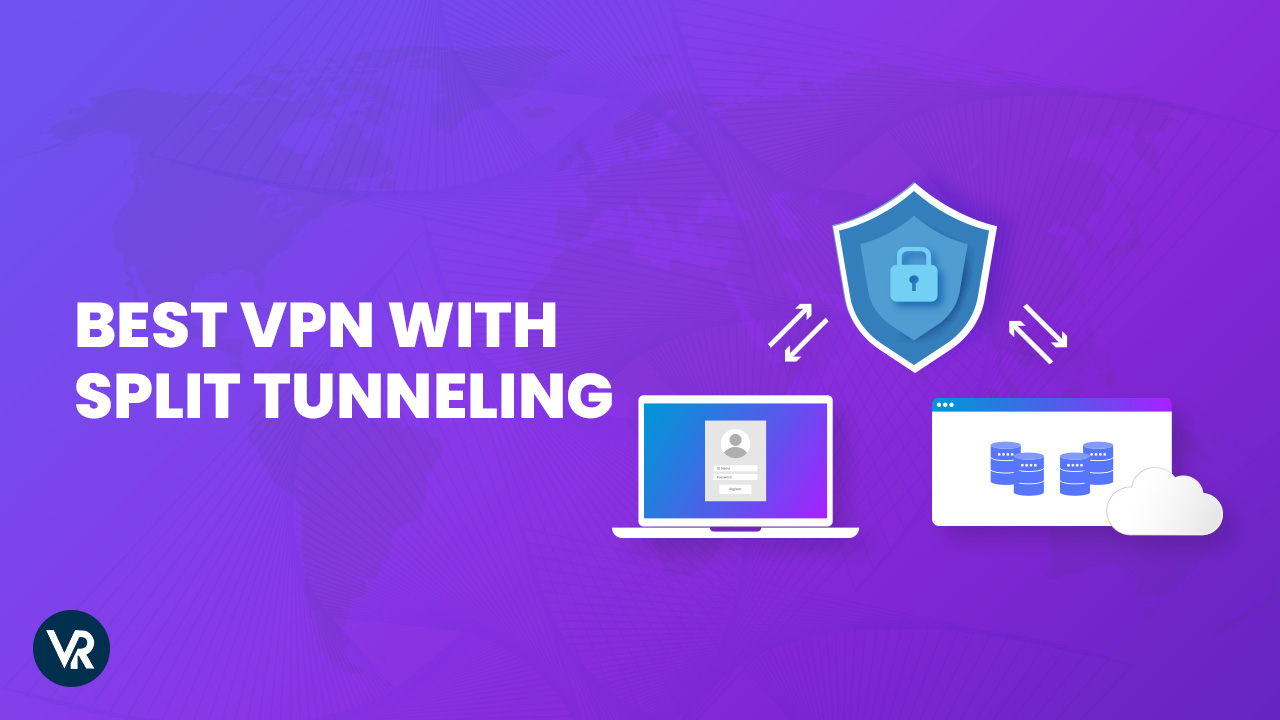 If you want to protect your online traffic and enjoy high speed using a VPN without losing access to your local network devices, use the best VPN with split tunneling. A split tunneling VPN enables you to route some of your device or app traffic over the secure VPN tunnel.

When you connect to a VPN, data moves between your device and the internet via a proxy server that works as a middleman. For certain activities, you do not want all of your traffic to pass through the VPN server. Split tunneling allows you to select precisely which apps, devices, or websites you want to use a VPN connection on and which ones use a regular ISP.

Split tunneling enables your VPN to process data quicker since your entire traffic won’t be routed via a single tunnel. As a result, you can get a seamless, bufferless streaming and torrenting experience.

After testing 70+ VPNs, we bring you the 5 best VPNs with split tunneling feature, with ExpressVPN taking the lead, as it even offers the feature for router app so that you can choose devices as well. Although VPN providers that support this feature usually brand it by different names, networking experts like to call it “split-tunneling.”

Quick Overview: The Best VPN with Split Tunneling in 2022

Here is a brief overview of our selected best VPN with Split tunneling in 2022:

Get ExpressVPN with split Tunneling30 Days Money Back Guarantee

The Best VPN with Split Tunneling in 2022 [ In-Depth Analysis ]

Split tunneling is a feature provided by very few VPN services. That said, after hours of research and testing, we’ve listed the 5 best VPNs just for you. Not only that, we keep in mind other important secuirty features that are essential for your online security.

Dig in further to get a complete analysis of the best VPN with split tunneling tested in 2022:

You can configure ExpressVPN split tunneling in three different ways: 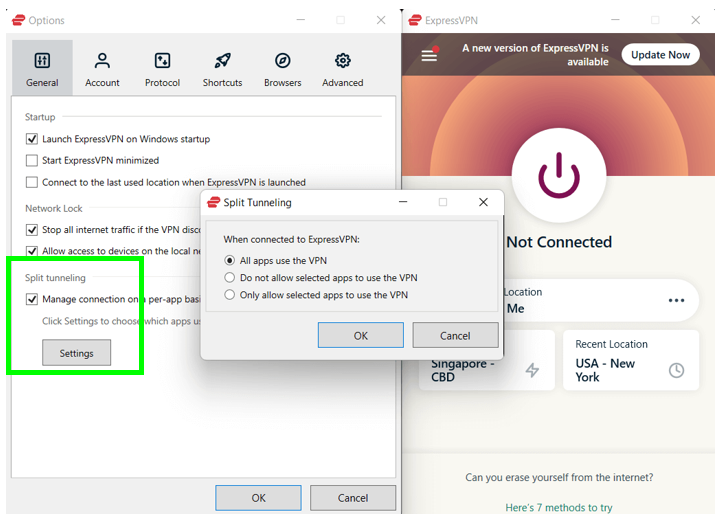 For details about the split-tunneling feature, you can check out the tutorial page on the official website.

If we talk about the ExpressVPN speed test, we enabled its split tunneling feature for streaming and took a test, we recorded an average download speed of 88.78 Mbps and an upload speed of 54.22 Mbps on a 100 Mbps base connection.

Besides this, ExpressVPN has excellent features for boosting the security and privacy of users, like an ExpressVPN kill switch. For encryption, it uses the AES-256 standard and supports modern tunneling protocols, including OpenVPN and the latest Lightway protocol. It also has a Threat Manager feature that protects your device from malware attacks.

The 3000+ servers in 94 locations get the job done perfectly well when you want to unblock any censored websites from anywhere in the world. Furthermore, it’s high power encryption technologies also help bypass ISP throttling, allowing you to browse freely.

ExpressVPN is available for $6.67/mo (Get 49% Off + 3 Months FREE this Black Friday/Cyber Monday) with a 30-day money-back guarantee. You can try it risk-free for 30 days or use ExpressVPN’s free trial. If you like the service, it offers a 3-month free subscription on its 12-monthly plan and 6 simultaneous connections on all of its subscription plans.

Surfshark is the most affordable VPN with a split tunneling feature, available for $2.05/mo (Get 84% + 2 Months FREE this Black Friday/Cyber Monday) with a 30-day money-back guarantee. It has pretty much every nifty feature bundled in a single package that any other provider has to offer. This includes split-tunneling, which is branded by the company as WhiteLister.

As the name implies, the WhiteLister allows you to select all apps that should use the VPNs. All the apps left unchecked in the WhiteLister function will be left untouched by Surfshark, allowing these to communicate to the Internet directly. 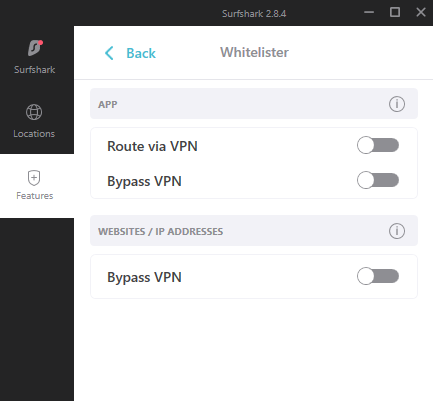 Talking about Surfshark speed test results after enabling the split tunneling feature. We recorded a great download speed of  81.32 Mbps and an upload speed of 76.12 Mbps on a 100 Mbps connection.

In addition, the 3200+ servers in 100 countries is more than capable of bypassing any censored websites with ease.

The service has built-in features like MultiHop, CleanWeb, Whitelister, AES-256-GCM encryption, and DNS leak protection. You can browse privately using the Surfshark bypasser and Camouflage Mode.

With a single Surfshark subscription, you can connect as many devices as you want, as it supports unlimited simultaneous connections. There are apps for Windows, macOS, Android, iOS, and more.

Try Surfshark’s free trial.  To find out more about this service, explore our Surfshark review.

Speaking of this feature, NordVPN’s split-tunneling works on the exclusion principle. When you enable this feature, the apps you select will be routed directly through your ISP, while the apps left unchecked will stay on the VPN tunnel. This feature works flawlessly with all compatible platforms except iOS.

NordVPN offers a server network of 5500+ servers in 59 countries. NordVPN apps are available for multiple platforms, and you can simultaneously connect up to six devices.

NordVPN speed tests were so fine when we used its split tunneling feature during remote work. We experienced an average download speed of 83.82 Mbps and an upload speed of 44.64 Mbps for uninterrupted streaming.

NordVPN speed results after turning on the split tunneling option.

Apart from this, NordVPN offers Obfuscated servers and advanced security features such as AES-256-GCM encryption, Onion Over VPN, and the kill switch. NordVPN also offers a Double VPN technology that gives you additional security by routing the traffic through multiple VPN servers.

Best of all, NordVPN is based in the jurisdiction of Panama, which is considered safe according to our in-depth Five Eyes guide.

You can get NordVPN for only $3.69/mo (Get 55% Off + 2 Months FREE this Black Friday/Cyber Monday), and it comes with a 30-day money-back guarantee on all premium plans. You can also try NordVPN’s free trial to check out its split tunneling feature.

To find out more about this service, explore our NordVPN review.

On the Android app, you can follow the below image to enable your CyberGhost split tunneling feature. 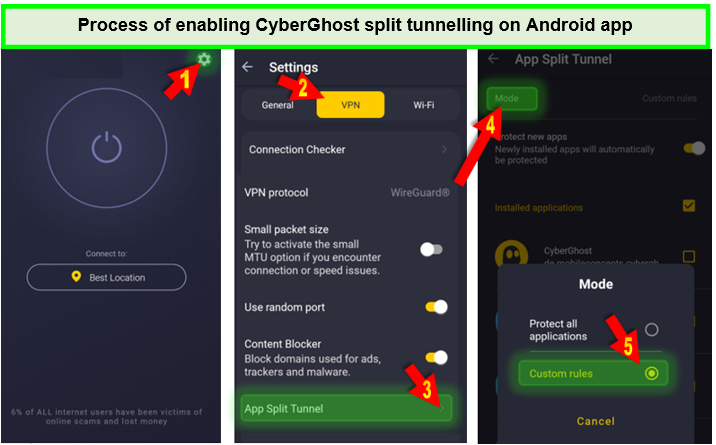 Following this method, you can choose which apps you want to go through a VPN.

For Windows 8 app, it offers an exception feature that works as a Split tunnel. All the apps excluded from this list will remain outside the VPN tunnel. You can even exclude websites by adding their URL in the exception menu. Check out this guide, CyberGhost Support, for a clear idea. 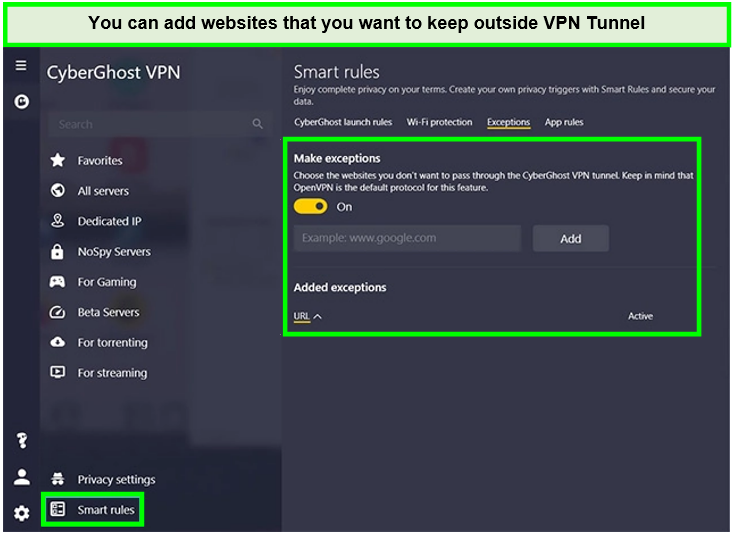 On the Windows app, the option “Exception” works as split tunneling.


During the Cyberghost speed test on a 100 Mbps connection, we recorded a decent download speed of  75.47 Mbps and an upload speed of 69.34 Mbps.

Cyberghost speed on a 100 Mbps connection when split tunneling was activated.

CyberGhost offers 8900+ servers in 91 countries and its apps have a user-friendly interface that even a beginner can use. There is also a section with dedicated servers for streaming, torrenting, gaming, and NoSpy servers for security.

It is compatible with all major devices, including Windows, Android, iOS, macOS, browsers (Chrome, Firefox), and more. It also supports 7 multi-logins so that you can secure multiple devices simultaneously.

CyberGhost is available for just $2.03/mo and offers extensive 45-day money back guarantee. Try Cyberghost’s free trial, and for any query, you can also reach out to its 24/7 Customer Support.

Find out more about this VPN in our in-depth CyberGhost review.

You can find the split tunneling feature under the Network tab in Settings. One of the most distinguishing features of PIA is its large server network. PIA has more than 35000+ servers in 80 countries. 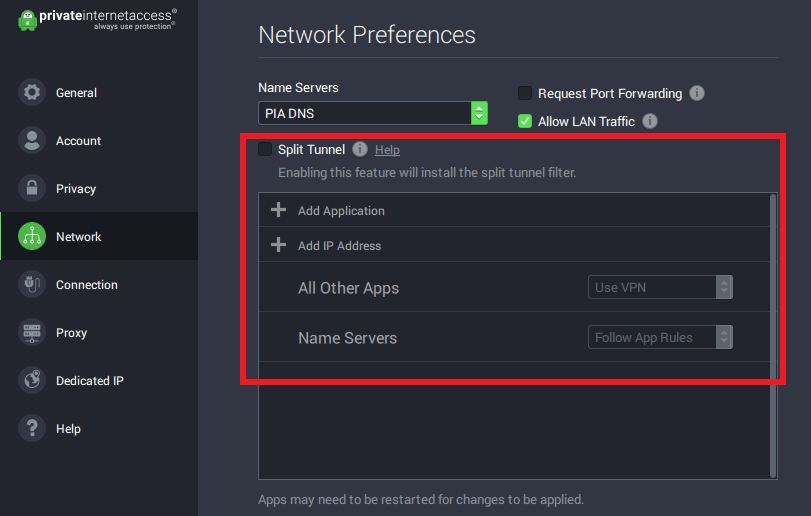 Despite being compatible with iOS, PIA doesn’t support split tunneling in any Apple device. However, you can use this feature on all desktop devices, including macOS, Linux, Windows, and more. Split tunneling is also available in its Android applications under the name “Per Settings.”

Aside from split tunneling, PIA offers powerful features like a secure kill switch and IP/DNS leak protection. You can choose from AES 128-bit and AES 256-bit encryption, although 256-bit is recommended as it offers better security. It also offers a feature called Built-In Ad Blocking feature called MACE, which blocks ads and malware.

PIA speed test result was not as impressive as other VPNs in this guide, but we recorded a fair download speed of 65.78 Mbps and an upload speed of 57.16 Mbps on a 100 Mbps connection.

PIA is headquartered in the USA (a major member of the 5/9/14 Eyes alliance). However, the provider offers a strict no-logs policy, and it is safe to use. PIA does not log any identifiable user data, so you are safe with this provider.

If we talk about pricing, PIA is quite affordable, costing only $2.03/mo . PIA also gives its users the freedom to secure 10 simultaneous connections and also offers a free trial and a full 30-day Money Back Guarantee.

To find out more about this service, explore our PIA review.

Split tunneling VPN gives the benefit of securing online activity while facilitating quick internet access. Let’s take a look at the other benefits of this feature below:

Get ExpressVPN with Split Tunneling30 Days Money Back Guarantee

How do you Set Up a Split Tunnel?

Follow these simple steps to activate split tunneling on your device:

Should I use Split Tunneling on VPN?

Moreover, a split tunneling VPN may be a good option for you if you’re happy to divide your online activity into activities you want to keep private and ones you think do not need much protection.

Is it safe to use split tunneling?

Yes, it does. Split tunneling poses a few security risks. Data that is not routed through a secure VPN encrypted tunnel is not shielded by the firewall, EDTR tools (endpoint threat detection and response), antimalware, and other security procedures, leaving it open to access by ISPs and cyber criminals.

Can I use a free VPN for split tunneling?

Yes, you can use a free VPN with split tunneling, but we do not recommend using them. Split tunneling is a feature only available by a few VPN providers on specific apps, which are premium services. Free VPNs lack in providing basic security features, and they offer no encryption at all. Some free VPNs even monitor their users’ online activity and sell that data to advertisers.

So, it is best to avoid free VPNs instead of a premium VPN service.

Does split tunneling slow down?

No, using a VPN with split tunneling can be an extremely effective approach to protect your confidential information without sacrificing your internet speed. However, it does expose some of your traffic to your ISP if you choose it to route through your regular network.

For your ease, we have tested this split tunneling feature on all of the 5 best VPNs. However, it’s impossible to pick the best one out. Still, if you ask, we recommend you install ExpressVPN split tunneling if you don’t want to compromise on your speed connections.

However, you can also learn more about the other split tunneling VPN service that most attracts you. Additionally, each service has a 30-day money-back guarantee and 24-hour live chat support, so they can assist you with your queries.

So make the most of the VPN split tunneling and make your online activities secure and your online streaming fast!

2 Responses to The Best VPN With Split Tunneling in 2022