The Best VPN For Popcornflix Outside US 2022 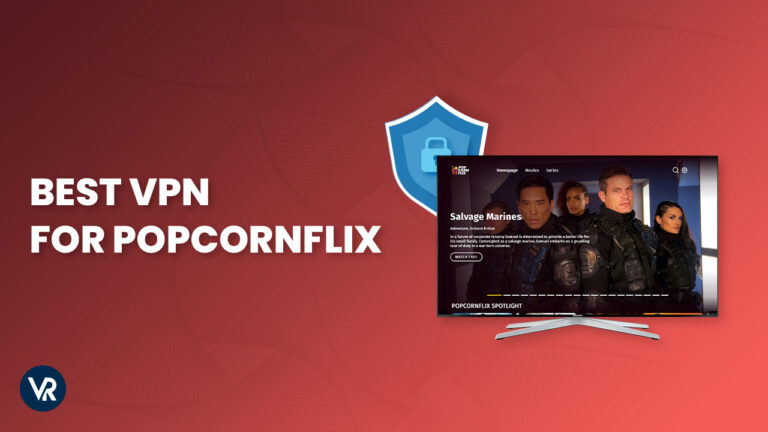 Popcornflix isn’t accessible in every country due to geo-restrictions and only works in the USA and Canada. So, if you are living in another country or traveling outside of these regions, you won’t be able to stream your favorite Popcornflix shows like “The Saint” or “My Pet Monster.” However, with the help of the best VPN for Popcornflix outside US, you can enjoy its contents seamlessly from everywhere.

A reliable VPN helps you hide your original IP address and route your traffic through a different server located in the US. This way, your current IP will be swapped from the US IP address, allowing you to access Popcornflix outside the USA.

To save you time, we have tested more than 45 VPNs and shortlisted the 3 Best VPNs for Popcornflix. Scroll down to discover the list below:

Overview: The Best VPN for Popcornflix Outside US in 2022

Here’s a quick rundown of the best VPN for Popcornflix outside US tested in 2022:

Jump straight to learn:
Detailed Analysis of Popcornflix VPNs Outside US | FAQs

Get ExpressVPN For Popcornflix30-day money-back guarantee

Why Do You Need a VPN for Popcornflix Outside the US?

You need a VPN to watch Popcornflix outside the US because it is a geo-restricted streaming site that doesn’t allow access to foreign viewers. If you try to access Popcornflix from outside of the US, you will receive an error message: 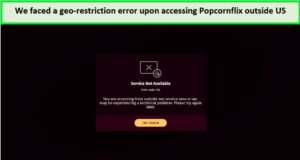 You’ll face a geo-restriction error upon accessing Popcornflix outside the US.

Hence, the only to get around these restrictions is to use a reliable streaming VPN. A VPN encrypts your traffic and routes it through its server, making it appear like you are accessing the internet from the USA.

Our top recommendation for Popcornflix is ExpressVPN, which uses advanced IP-spoofing technology to bypass restrictions. It boasts a network of 25+ server locations in the US, all of which are optimized for smooth streaming.

Get ExpressVPN For Popcornflix30-day money-back guarantee

After thoroughly assessing 40+ VPN services, we have finally come down to the list of top 3 VPNs that actually work with Popcornflix in 2022. Check out their detailed analysis below:

1.  ExpressVPN – Overall, the best VPN for Popcornflix Outside US

ExpressVPN is the best VPN for Popcornflix outside US, delivering exceptional speed and outstanding unblocking facilities. It has around 3000+ servers around the globe in 94 countries, and 25+ locations of them are based in the USA. ExpressVPN is based in the British Virgin Islands, where the data retention laws favor users.

While testing ExpressVPN’s New York server, we could unblock and stream Popcornflix with ease. We did not face buffering issues or lags, and the streaming quality was UHD, as ExpressVPN has unlimited bandwidth for a seamless streaming experience. 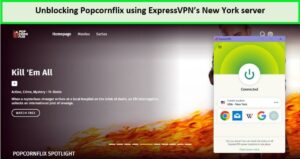 We could unblock Popcornflix within seconds using ExpressVPN servers.

Along with Popcornflix, you can also unblock other streaming services like YouTube TV, Fubo, Disney+, and Netflix on ExpressVPN. We also had a tremendous experience streaming Hulu, Amazon Prime Video. it also makes you able to watch CBC channel in USA

ExpressVPN uses 256bit-AES military-grade encryption to secure their user’s data. A secured DNS prevents data leakage, and the Kill Switch feature of ExpressVPN disconnects your device from the internet as soon as the connection is lost. Moreover, ExpressVPN has a strict no-logs policy.

You can get ExpressVPN for only $6.67/mo (Get 49% Off + 3 Months FREE this Black Friday/Cyber Monday) with a 30-day money-back guarantee. Their 24/7 customer support is very responsive and helpful, we asked them a few questions, and they answered promptly and thoroughly. You can get an ExpressVPN 7-day free trial for mobile users.

Learn more about this best Popcornflix VPN in the detailed review of ExpressVPN.

Surfshark is a budget-friendly VPN for Popcornflix that offers you a subscription at a minimal price of $2.05/mo (Get 84% + 2 Months FREE this Black Friday/Cyber Monday) without compromising on quality. It has 3200+ servers in almost 100 different countries, and 600 servers are in US cities. Surfshark is based in the Netherlands, where the data retention laws are very relaxed.

We rigorously tested Surfshark’s Chicago server to stream Popcornflix, and the results were outstanding. The streaming quality was UHD, and we didn’t face any buffering issues. 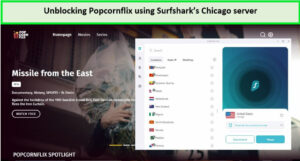 Unblocking Popcornflix was not an issue using Surfshark servers.

We tried to unblock other geo-restricted streaming services like HBO Max, Peacock TV, Disney+, and Netflix with Surfshark. Surprisingly, all streaming services performed well without any sort of interruptions or lags. Still, we want to have a clear picture of this VPN performance regarding the unblocking of channels outside the US, therefore we tried to access Bounce TV outside the US, and RTE player US surprisingly we got successful results.

During the Surfshark speed test, it gave us a downloading speed of 81.32 Mbps and 76.12 Mbps of uploading speed on a connection of 100 Mbps.

Surfshark VPN is compatible with all major operating systems like iOS, Android, Linux, and Windows. You can also use Surfshark on Kodi, Firestick, laptops, tablets, smart TVs, and other devices.

Surshark VPN uses 256-bit encryption for the protection of their user’s data. It also offers Leak Protection and a Kill switch to enhance your security. It strictly follows the no-logging policy and ensures that its users’ identities remain anonymous.

You can get the Surfshark for only $2.05/mo (Get 84% + 2 Months FREE this Black Friday/Cyber Monday) with a 30-day money-back guarantee. Surfsharks’ 24/7 live chat is highly responsive and can help you resolve almost any problem you face while setting up or using Surfshark. Also, mobile users can get a Surfshark 7-day free trial.

Learn more in the detailed review of Surfshark.

NordVPN is the reliable VPN for Popcornflix with around 5500+ servers in 59 different countries, out of which almost 1970+ servers are based in the US. NordVPN is based in Panama, a country with no data retention laws.

While testing NordVPN’s Buffalo servers unblocking capabilities, we faced no lagging or in-stream ads issues. With NordVPN, we enjoyed a 4K streaming of Popcornflix movies with no buffering problems. 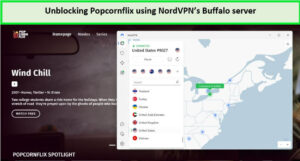 We could watch all the shows and movies in HD streaming, thanks to NordVPN servers.

If you want to watch your favorite shows on other streaming channels like “The Little Mermaid” or “Aladin” on Disney+, NordVPN can unblock them too. It also makes you able to watch H&I outside US. Moreover, we could also stream different Netflix libraries with NordVPN.

After the NordVPN speed test, on a 100Mbps connection, it gave us a downloading speed of 83.82 Mbps and uploading of 44.64Mbps which is quite good for streaming.

It offers applications for all major channels, such as Linux, iOS, Windows, Android, and macOS. It also has extensions for browsers like Chrome and Firefox and allows you to connect six simultaneous devices with a single account. You can also use NordVPN on Firestick, Kodi, router, android TV, Apple TV, and other devices.

You can get NordVPN for only $3.69/mo (Get 55% Off + 2 Months FREE this Black Friday/Cyber Monday) with a 30-day money-back guarantee. We also tested their 24/7 customer support by asking them different questions, and their response was quite satisfactory. A 7-day free trial for NordVPN is available for iOS and Android users.

Learn more in our detailed review of NordVPN.

Methodology: How to Choose The Best VPN For Popcornflix Outside US?

While choosing and testing different VPNs, we consider the following factors to ensure we only recommend best VPN for Popcornflix outside US:

Quick Comparison Table: Best VPN for Popcornflix Outside US

Here’s a quick comparison of the best VPN for Popcornflix outside the US:

How to use a VPN to Stream Popcornflix Outside US?

Follow these simple steps to stream Popcornflix outside US with a VPN:

Get ExpressVPN for Popcornflix30-day money-back guarantee

Can I Use Free VPN to Unblock Popcornflix Outside US?

Yes, you can use a free VPN, but we never recommend you to use a free VPN because free VPNs keep logs and sell your data to third-party advertisers. And most of the time, they cannot even unblock restricted websites due to subpar encryption standards.

Therefore, it’s better to use a premium VPN like ExpressVPN that comes with a money-back guarantee. This way, you can claim a refund if you’re not satisfied with the service.

Which Devices Are Compatible With Popcornflix?

Below is the list of some most commonly used devices compatible with Popcornflix to stream outside the US:

Why isn’t my VPN working with Popcornflix outside US?

If your VPN isn’t working Popcornflix, it might be for the session cookie. A session cookie causes a geo-block error, even if you have a VPN installed. Your browser’s cookies tell Popcornflix you’re from a different country even though you have a US IP address.

The solution we found and worked for us is to clear your cookies before connecting to the VPN and visiting Popcornflix. You should also use the incognito/private mode to avoid such problems.

What is the best free VPN for Popcornflix outside the US?

Unfortunately, no free VPN can offer you buffer-free Popcornflix streaming and security. If you still want to use a free VPN, you can use TunnelBear. But we don’t recommend it as it provides very low speed and is not secure. We always recommend using a premium VPN like  ExpressVPN because it’s more reliable and offers you the best streaming experience.

Are VPN speeds too slow for Popcornflix outside US?

No, VPN speeds are not too slow for Popcornflix. A premium VPN like ExpressVPN offers you high speed to stream Popcornflix with almost no buffering.

But free VPNs tend to be very slow as they have a limited number of servers and a lot of users. So, it’s better to use a premium VPN like ExpressVPN for a better streaming experience.

We recommend you use ExpressVPN for streaming Popcornflix because it has 25+ server locations in the USA.