Best VPN for Lost Ark in US [Access the Korean Version] 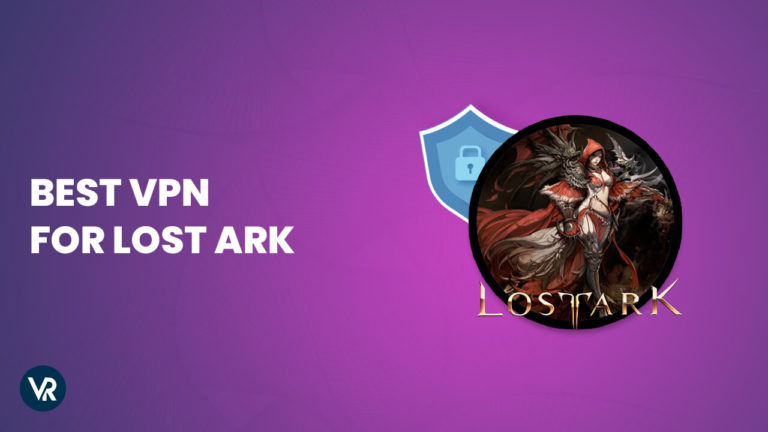 After the release of Lost Ark in the west, it quickly gained popularity in the gaming world; however, the western version had some flaws that began appearing on the surface. Commonly reported issues to include longer queue times and annoying PVP mechanics.

In contrast, the Korean and Russian versions of Lost Ark are much better than their Western counterpart in terms of quality, usability, functionality, and accessibility. To download and play the game abroad, users need a Russian or Korean IP address.

The best VPN for Lost Ark can facilitate unrestricted access to the Korean version of Lost Ark by modifying the IP address. Furthermore, a reliable VPN guarantees protection against attacks such as DDoS while enabling complete security online. In this way, players residing outside Russia and South Korea can avail better features with the help of VPNs.

Are you a fan in the US and interested in playing Lost Ark? Stress no more. You can still play your favorite action game using VPNs abroad.

In this post, we will cover the ways you can enjoy Lost ARK with the best selection of Gaming VPNs.

Quick Overview— Best VPN for Lost Ark in US

Here’s a quick rundown of the best VPN for Lost Ark in US tested in 2022:

Detailed Analysis-Best VPN for Lost Ark in US | FAQs

Why Do I Need a VPN for Playing Lost Ark?

You need a VPN for playing Lost Ark because VPNs can be used to unblock restrictions and provide access to otherwise locked versions of games online. From online security to hiding identity, VPNs are bundled with useful features for internet users.

Give a read to the various reasons why you must consider using a VPN to play Lost Ark, even when it seems like an extra struggle.

Detailed Analysis – Best VPN for Lost Ark in US

1. ExpressVPN – Best VPN for Lost ARK in US

ExpressVPN is the best VPN for Lost ARK in US. Being one of the most famous and largest brands in VPN industry, ExpressVPN is undoubtedly outstanding. ExpressVPN has been providing secure and private VPN services for a long duration.

It has 3000 servers in 94 countries, including South Korea and Japan. We could easily access the Korean version of Lost Ark using ExpressVPN’s South Korean server. 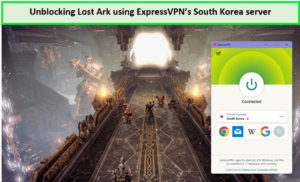 In addition to unblocking the Lost Ark Korean version, you can also unblock other geo-restricted games like Call of Duty or PUBG and streaming platforms like Netflix, Amazon Prime, and HBO Max using ExpressVPN.

With this best Lost Ark VPN, our connection had a speed drop of around 10%.

Users can connect up to 5 devices simultaneously on a single subscription and run ExpressVPN on almost any device, for instance, Windows, iOS, Linux, macOS, and many others. You can easily set up ExpressVPN on PlayStation and continue gaming with a better experience.

ExpressVPN offers blazing speed service with the help of extremely fast VPN protocols like Lightway, OpenVPN, and IKEv2. ExpressVPN uses an AES-256 cipher with an RSA-4096 key and SHA-512 HMAC authentication with the OpenVPN and IKEv2 protocols.

ExpressVPN is not a cheap VPN service having above average prices. It has 3 deals and payment options divided into monthly and yearly packages. The basic package costs $6.67/mo (Get 49% Off + 3 Months FREE this Black Friday/Cyber Monday). With ExpressVPN’s 30-day free trial, you can explore and use all features and services of ExpressVPN without any hidden costs.

Get more details by following our ExpressVPN review.

2. Surfshark – Budget-friendly VPN for Lost Ark in US

Surfshark is the ideal budget-friendly VPN for playing Lost Ark in the US as it costs just $2.05/mo (Get 84% + 2 Months FREE this Black Friday/Cyber Monday). Based in The Netherlands, Surfshark was officially launched in 2018, but it has gained tremendous attention despite being a new name in the VPN world. 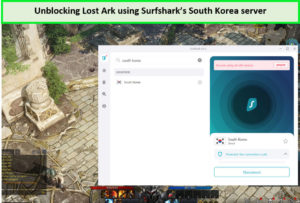 We had a terrific time playing Lost Ark, thanks to the seamless internet connectivity provided by Surfshark servers.

Apart from gaming, Surfshark can operate with online streaming services spread across the UK, the USA, and Canada, such as Disney Plus using Surfshark, BBC iPlayer,  Amazon Prime, Sky Sports, Channel 4, and many others.

The speed test reveals promising aspects of Surfshark with WireGuard but average performance speed with OpenVPN. While testing Surfshark speed, we got an average download speed of 85.42 Mbps and 48.64 Mbps upload speed on a 100 Mbps base connection.

These speed results were enough to play without buffering.

Surfshark supports nearly all operating systems and devices and lets you connect unlimited devices simultaneously. You can set up Surfshark on PS4 and enjoy gaming like never before. Other devices, like PS5, Xbox, Roku, and Firestick, are also compatible with this VPN provider.

To ensure security, Surfshark offers the Stealth Mode and CleanWeb features for a secure browsing experience. CleanWeb blocks malware and malicious advertisements before they even load and prevent all phishing attempts. The advanced Camouflage mode allows you to browse without making your internet provider know about your VPN usage.

Moreover, Android and iOS users can get Surfshark’s 7-day free trial, along with a 30-day money-back guarantee, which is a deal new gamers can definitely get on board with.

3. NordVPN – Largest Server Network VPN for Lost Ark in US

NordVPN has the largest server network VPN for Lost Ark, as it has 5500+ servers in 59+ countries, including Japan and Korea.

NordVPN is one of the most well-recognized VPN names in the commercial sector, offering incredible speed and top-level security. NordVPN is the best VPN For South Korea, and make it easy for players to download and play the Korean version of Lost Ark anywhere, anytime. 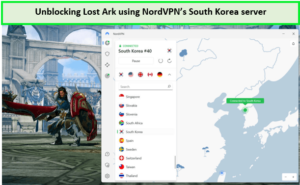 Through NordVPN servers, we faced the lowest pings while playing the Korean version of Lost Ark.

Individuals can play their favorite games or stream content on laptops, phones, or tablets with the help of Smart DNS technology. You can also unblock streaming sites like HBO Max using NordVPN, Crunchyroll, Sky Sports, BT Sport, and many more.

The speed tests observed show satisfactory speed rates within the US and UK. During the NordVPN speed test, it recorded a download speed of 86.18 Mbps and an upload speed of 42.13 Mbps on a 100 Mbps base connection.

Users can easily connect up to 6 devices simultaneously with one NordVPN account. The VPN also blocked restricted games in the US, including Postal 2, Manhunt 2, and Command and Conquer. You can get NordVPN on routers, Roku, gaming consoles, Firestick, smartphones, etc.

NordVPN has nominal subscription deals that start from $3.69/mo (Get 55% Off + 2 Months FREE this Black Friday/Cyber Monday). Users can grab a NordVPN free trial and a 30-day money-back guarantee in case of service cancellation.

Head over to our NordVPN review to explore more about its benefits.

Testing Methodology: How We Selected and Tested these VPNs

While deciding on the best VPN for a streaming service, you must consider various factors to reach a sensible conclusion. We considered the following factors while shortlisting the best VPN for Lost Ark:

1. Speed and Stability of Service

When VPNs are added to the standard network, they typically slow down the network connection. Extra encryption layers and steps put weight on the usual network, slowing down the service and affecting overall streaming quality. So selecting a VPN with quick retainment capabilities to regain the original speed is highly essential for a seamless experience.

With increasing phishing, personal, DDoS, and other attacks, building a strong VPN security service is important and should not be ignored.  Security is becoming the largest concern of the modern technology-inspired world. A VPN that secures the user activity on the network by masking identity and hiding the true IP address is crucial for safety.

VPNs with many server installations indicate their service strength in different geographical locations. VPN with a weak base and just a few server connections across the globe would not work fine for high-end streaming. The higher the server count, the optimal and better the internet speed (essential for gaming).

Who wants to pay a fortune for something that can be purchased in less? With gazillion alternatives available at hand, users look for value-based services. Therefore, VPNs with reasonable payment plans and subscription deals weigh higher on the selected scale.

Can I use a free VPN for Lost Ark?

Yes, you can use a free VPN for Lost Ark, but it’s not a safe practice, and hence it is not recommended. Some free VPNs can encrypt all or part of your traffic, varying between the service providers. Free VPNs lack essential advanced security features that protect your online activities. Without proper security protocols, your data can be recorded, exposed, and even misused by third parties.

Moreover, most best free VPN for Lost Ark don’t have enough servers at every location. Insufficient servers lead to service disruption, delays, distortion, and poor delivery of services. You may find no luck while trying to play Lost Ark with free VPNs. Therefore, invest in the right VPN with authentic services, dynamic features, and good user reviews.

FAQs – Best VPN for Lost Ark in US

How do I lower my ping in Lost Ark?

To lower your ping while playing Lost Ark, you need to close all apps that are running in the background. You can do that by opening up Task Manager, End all the unnecessary tasks that you aren’t using. This trick should be able to fix your high pings issue in Lost Ark.

Yes, a VPN can unblock the Lost Ark game. Originally developed by the Koren developers, Lost Ark has been restricted to users in Korea, Russia, and Japan. Fans residing in the other regions cannot directly download or access it. Fortunately, you can use ExpressVPN to unblock Lost Ark and enjoy gaming.

Will Using a VPN for Lost Ark Slow Down My Connection?

Yes, using a VPN for Lost Ark can slow down your connection to some extent, but it depends upon the type of VPN that you select. If you use ExpressVPN, which has speed retaining capacity, then it won’t have a big impact on your internet speed.

The developers of Lost ARK have limited the game access in Russia, South Korea, and Japan. Players from other countries cannot directly access the game, which makes them start a quest to search for the best VPN for Lost Ark. The game can be accessed through limited servers located in specific regions.

Modern VPNs are equipped with versatile and robust features. We have discussed and analyzed the top 3 best VPNs for Lost Ark. Each of the three offers high-quality servers that are private and secure. With the 30-day money-back guarantee, users can explore them as needed to finalize the one that fits best without putting a single penny at risk.