Best VPN For College Football Outside US 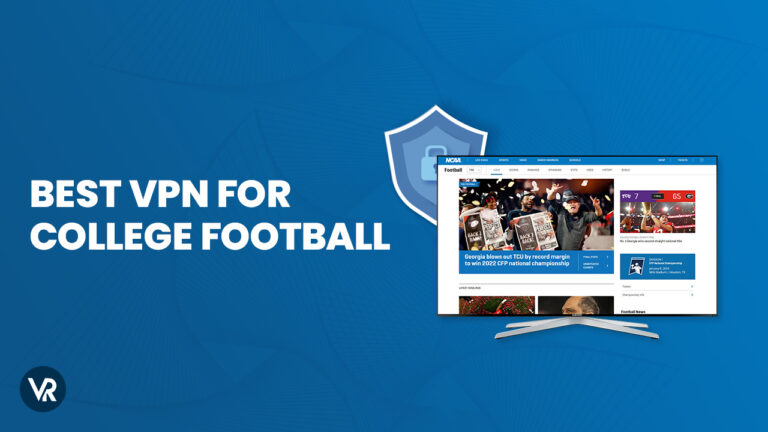 College Football is one of the most followed and watched sports in the United States. It’s always full of excitement, action, and drama. From touchdown celebrations and brutal tackles to tailgate parties and buffalo wings, nothing beats the thrill of watching college football.

However, if you are planning to move outside the state of your favorite team or the United States while the football season is going on, catching all the live action can become challenging due to regional blackouts and geo-restrictions.

To overcome these location-based barriers, you will need the best VPN for College Football. You can catch the live coverage of NCAA college football on Hulu and ESPN+. No matter what’s your current location, using a reliable VPN to get a US IP address is among the best solutions to ensure you catch up with all the exciting football action by overcoming the geo-restrictions of streaming platforms.

We will also explore the 3 best VPNs for college football streaming. So, let’s dive into it!

Quick Overview: Best VPN for College Football Outside US

If you are in a rush, here are the 3 best VPNs for College Football outside US:

Why Do You Need a VPN to Watch College Football Games outside US?

Broadcasting channels and streaming services tend to block their content from viewers living outside the United States due to content licensing restrictions.

Moreover, NCAA college football also has regional blackouts which means you can’t stream or watch the game of your local team live on TV. To overcome these annoying regional restrictions, you need a VPN to watch College Football games outside US.

The coverage of college football games is usually carried by CBS Sports, ESPN, ACC Network, SEC Network, Big Ten Network, Sling TV, Hulu + Live TV, and fuboTV. A majority of local regional games are restricted by blackouts, and that means you can’t watch them on any of the above-mentioned channels. 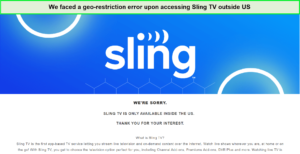 If you access Sling TV outside the US, you’ll face a geo-restriction error as we did.

Luckily, a VPN can overcome these geo-restrictions for you by changing your real IP address and disguising it with a new IP address from a server where your preferred college football games are airing.

With the help of a VPN app, you can spoof your actual location and trick the streaming service into believing that you are currently trying to watch college football from a location that has no regional blackouts or geo-restrictions.

We tested more than 60 VPNs for their security, speed, unblocking power, and servers. After thorough testing, we’ve shortlisted the following 3 best VPNs for College Football outside US. Here’s an in-depth analysis:

1. ExpressVPN – Best VPN for College Football Outside US

ExpressVPN is the best VPN for College Football outside the US. This VPN offers lightning-fast connections and includes everything you need to unblock geo-restricted streaming services, including ESPN+ and Hulu outside the USA.

Thanks to a wide network of 3000+ servers in over 94 countries, including 25+ server locations in the US, you can quickly get access to NCAA College Football games from anywhere.

You may use this VPN to bypass geo-restrictions on popular streaming services, including Vudu, ESPN Plus, YouTube TV, Sling TV, FuboTV, Paramount Plus, and HBO Max outside the USA. You also have the liberty to explore different Netflix libraries with ExpressVPN. Here you can see we’ve unblocked ESPN+ using ExpressVPN’s New York server: 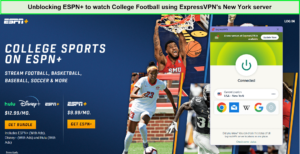 This VPN is known for its fast speeds, and it lived up to the hype. On our ExpressVPN speed test, it provided an excellent downloading speed of 89.64 Mbps and an uploading speed of 84.64 Mbps on a 100 Mbps connection.

ExpressVPN is fully compatible with a variety of operating systems, including Windows, Linux, macOS, iOS, and Android. It also features a powerful utility tool called MediaStreamer, which makes it possible to watch geo-restricted content on devices that are VPN-incompatible like Chromecast, FireStick, Smart TV, Roku, Apple TV, and iPhone with ExpressVPN.

This VPN offers world-class streaming quality thanks to its Lightway protocol. ExpressVPN allows you to watch live College Football sports events and many other geo-restricted contents while maintaining important security features such as AES-256-Bit Encryption, an authenticated ExpressVPN No Log Policy, and a Kill Switch.

Considering the fact that ExpressVPN is significantly more expensive than its peers, you can rest easy knowing you will receive excellent service. Its annual subscription plan is just $6.67/mo (Get 49% Off + 3 Months FREE on its 12-Month Plan). For mobile phone users, it offers a one-month return guarantee along with a 7-day free trial of ExpressVPN services. All users have access to customer service day and night.

To know more about this VPN, try out our ExpressVPN detailed review.

Because of its reasonable prices, Surfshark is the most budget-friendly VPN for watching NCAA College Football outside the US. At a reasonable cost of $2.05/mo (Get 84% + 2 Months FREE on 2-Year Plan), you can subscribe to its 2-year membership plan. This VPN offers a comprehensive network of more than 3200 servers spread across 100 countries, including 600+ US servers.

This VPN can easily access College Football outside the United States thanks to its advanced additional privacy. In addition, it is also used to access streaming services like HBO Max, FuboTV, Disney+, Sling TV, YouTube TV, and Netflix with Surfshark. Here you can see we’ve unblocked ESPN+ using Surfshark’s Buffalo server: 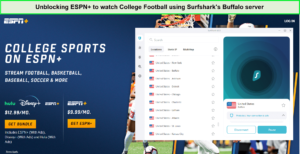 Watching College Football on ESPN+ is a piece of cake using Surfshark servers.

Surfshark also offers fast connections and unlimited bandwidth, which are essential for enjoying any sports content in Ultra HD quality online. We performed multiple Surfshark speed tests on a 100 Mbps connection, and Surfshark registered an impressive download speed of 81.32 Mbps and an upload speed of 76.12 Mbps.

Surfshark’s distinguishing characteristic is that it supports an unbounded number of simultaneous connections with a single subscription. Surfshark apps are easy to use and compatible with iOS, Linux, Windows, Android, and macOS devices.

Surfshark also includes an in-house SmartDNS utility for accessing geo-restricted services on a range of streaming devices such as Chromecast, Fire Stick, Apple TV, and gaming consoles. You can also configure Surfshark on the router to enjoy shared protection across all of your connected devices.

Surfshark is a complete package if you want a high-quality VPN service at a low cost and with a one-month money-back pledge. A one-week free trial of Surfshark is also available for mobile users. Are you still experiencing technical difficulties? Surfshark’s customer assistance is accessible 24/7.

Get to know more about this VPN through our Surfshark detailed review.

Other streaming sites such as NBC, Sling TV, FuboTV, Amazon Prime, and Netflix can be accessed with NordVPN. Regarding speed, its revolutionary NordLynx protocol supports 4K streaming. After changing your IP address with NordVPN, you can also watch Showtime and Peacock TV outside the US. Here you can see we’ve unblocked ESPN+ using NordVPN’s Seattle server: 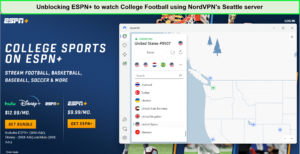 As per our NordVPN speed test On a 100 Mbps connection, NordVPN offered us a swift downloading speed of 83.82 Mbps and an upload speed of 44.64 Mbps.

NordVPN offers a maximum of six devices simultaneously and is compatible with various operating systems such as macOS, Windows, Android, Linux, and iOS. With the SmartPlay (SmartDNS) tool, you can access geo-restricted streaming sites on a variety of streaming devices, including Apple TV, Roku, Gaming consoles, Playstation, Firestick, Chromecast, and iPhone with NordVPN.

NordVPN also provides world-class security and online privacy, with cutting-edge features like AES-256-Bit Encryption, NordVPN’s audited no-log policy, server obfuscation, and an effective NordVPN kill switch. These technologies make it simple to get around geo-restrictions imposed by many streaming sites.

In terms of cost, NordVPN’s two-year membership at $3.49/mo (Get 57% Off + 3 Months FREE on 2-Year Plan) is the top choice. You will also get a 30-day refund warranty. Mobile users can also benefit from a 1-week free trial of NordVPN on the day of its subscription. The company’s customer support lines are available all day to help you with any technical concerns.

For more information, refer to our NordVPN detailed review.

Methodology: How to choose the Best VPN for College Football outside US?

Can I stream college sports using a free VPN outside US?

Yes, you can stream College Sports using a free VPN outside US, but using a free VPN is not recommended due to many reasons and security concerns. First of all, a free VPN may not even be able to provide you with enough USA servers to unblock College Sports outside US. Furthermore,  it might not provide you with a strong unblocking ability as almost all of the geo-restricted platforms use different gears and software to detect and block the VPNs.

Due to the heavy traffic which free VPNs attract, they are more detectable and they do not use modern gadgets to take their security system up a notch. Moreover, free VPNs pose a great threat to your online presence. These VPNs are known to sell their users’ data and information to third parties. Online scammers and hackers also get their hands on your personal information as well.

So it is better that you make sure to be safe online than to be sorry later. We recommend getting a premium VPN service like our top-priority VPN, ExpressVPN. Also if you are looking to watch NCAA Football for free you can utilize a temporary solution, by opting for the 30-day free trial ExpressVPN offers.

FAQs – Best VPN for College Football outside US

Can I watch College Football with a VPN?

Yes, you can watch College Football with a VPN if you choose a high-performance premium VPN service to unblock the sporting event outside USA. You can use our recommended ExpressVPN as it is the best VPN for College Football and will provide you the guaranteed access.

What is the best VPN for College Football?

ExpressVPN is the best VPN for College Football as it has a large server network around the world. These fast servers will not only allow you to watch the NCAA but also unblock many other streaming services and channels as well.

Is using a VPN to watch College Football legal?

Yes, using a VPN to watch College Football TV Pro is legal, however, it might be against the terms and conditions of that specific streaming service. Also, always check the local rules and regulations when you are thinking of using a VPN service as some countries may prevent you from using a VPN.

College football is one of the most followed and popular college sports. The NCAA organizes the marquee college football league in the United States, and every season is filled with a lot of thrilling action, nail-biting matches, and a lot of upsets.

There are tons of college football matches played every year and tens of thousands of fans tune in to watch their favorite teams. However, due to geo-restrictions and regional blackouts, it’s not possible to watch all matches of your favorite team.

The best way to access and watch a geo-restricted or blacked-out NCAA college football game is by using a VPN app. In this guide, we have explored the 3 best VPNs to watch college football matches.

Among all the premium and top-grade VPNs, ExpressVPN is the best VPN for College Football. So, what are you waiting for? Get your VPN subscription today and enjoy a wonderful, hassle-free, and buffer-free streaming experience.