The Best VPN for CNBC Outside USA [Efficient Streaming] 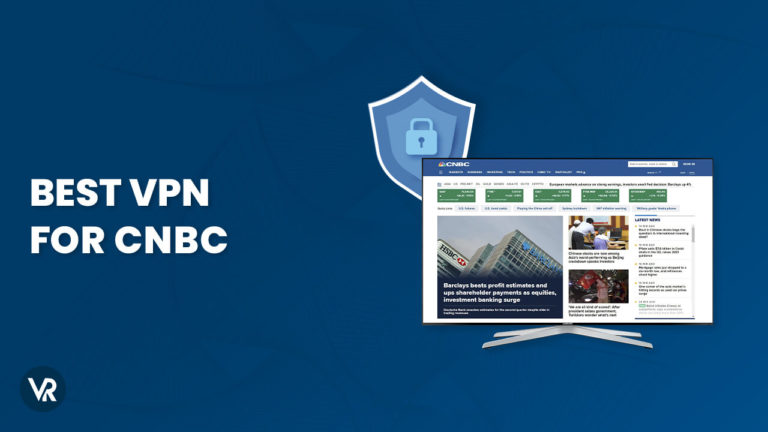 Are you perhaps traveling or simply situated outside the US and wondering, “How can I watch CNBC outside USA?” In both cases, you’ll need the best VPN for CNBC to stay in touch with the latest news.

CNBC is, perhaps, one of the most popular news channels in the Western World. From a list of amazing shows to market insights and tech updates, you get everything on the same platform.

But despite a vast following, CNBC is not available for streaming outside the USA even today. So, what is the solution to this problem, you might ask? Just use a VPN with a US IP address. A reliable VPN is a great way to bypass CNBC’s geo-restrictions and access the platform easily outside the States.

For this guide, we tested 40+ VPNs and came up with a list of 3 options for CNBC. So, without further delays, let’s get into the guide!

Quick Overview – 3 Best VPNs for CNBC Outside the USA

Here’s the list of top VPNs to choose the best VPN for CNBC in 2022:

After testing 40+ VPNs on multiple factors, we came up with a list of 3 CNBC VPNs that are simply great at providing a seamless streaming experience from your location. Let’s discuss them in detail:

1.  ExpressVPN – The Best VPN for CNBC with Blazing-Fast Speeds

ExpressVPN is the best VPN for CNBC outside the United States. That’s because this VPN offers efficient unblocking capabilities, user-friendly apps, and super-fast speeds. When tested, the VPN delivered a download speed of 87.18 Mbps and an upload speed of 52.13 Mbps (check out our speed test below).

ExpressVPN offers 3000+ servers available in 94 countries across the globe. Among these servers, you get multiple servers in 25+ US locations. We could unblock CNBC with ExpressVPN’s Atlanta server in only a few seconds. 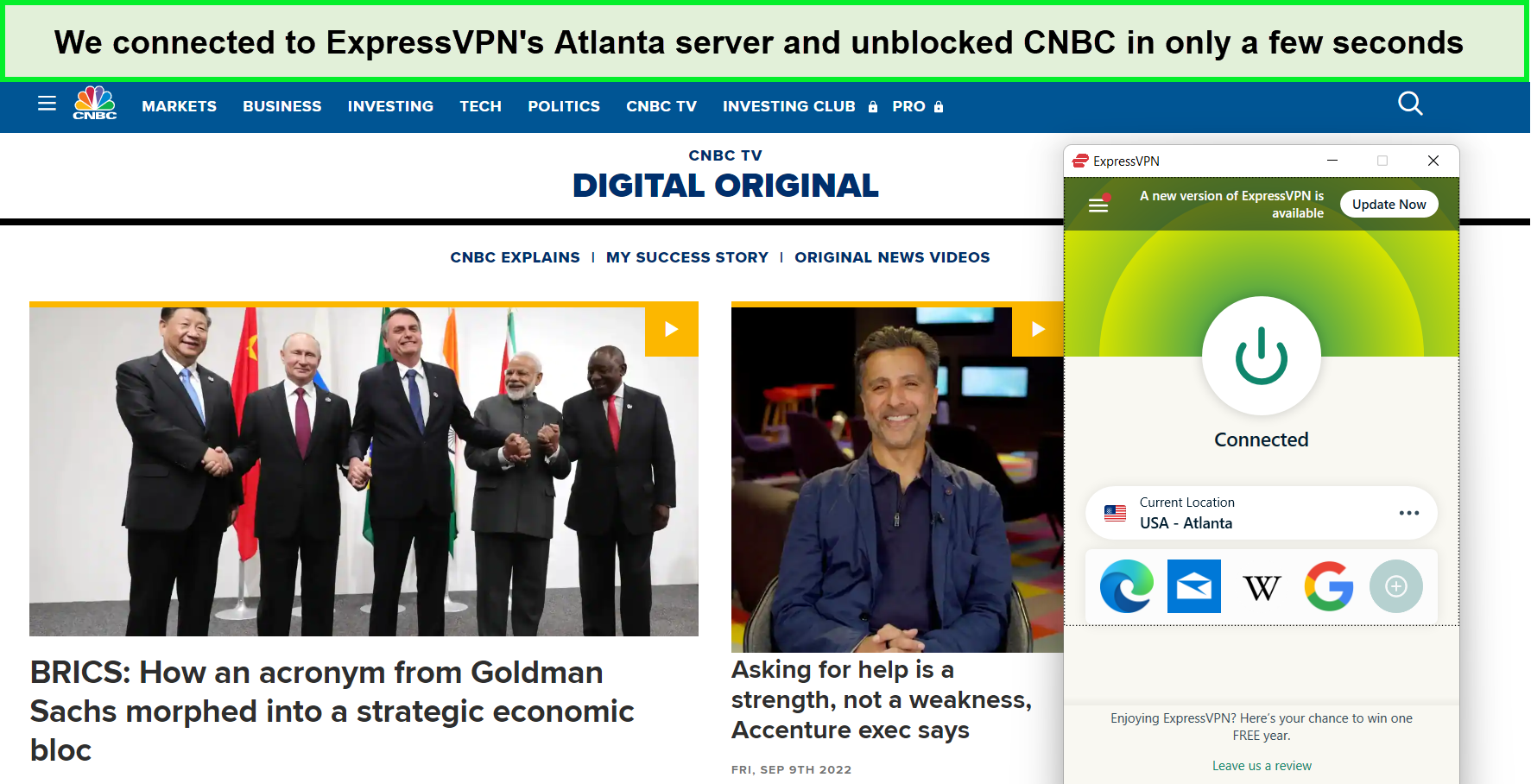 We could watch CNBC live, Originals, podcasts, and check out the latest marketing insights with this VPN.

Speed-wise, ExpressVPN shows why it’s the front-runner. Where blazing fast speed might be a feature for some other VPNs, for ExpressVPN, it’s a standard. During our ExpressVPN speed test, the VPN managed to deliver a download speed of 87.18 Mbps and an upload speed of 52.13 Mbps on a 100 Mbps base connection.

With these speeds, we could stream CNBC’s content without any lags.

ExpressVPN also provides unlimited bandwidth, which ensures the consistency of the connection. Along with  CNBC, ExpressVPN unblocks Netflix, Amazon Prime, HBO Max, and Disney+ outside US.

ExpressVPN even offers 5 simultaneous connections so that you can stream CNBC on more than one device. It is available on just about every major operating system/device, including Windows, Linux, macOS, Chrome OS, Android, iOS, Kindle Fire, Android TVs, and more. We could also use ExpressVPN on FireStick and stream it on a bigger screen.

ExpressVPN offers very lucrative pricing offers for its users. You can get it for $6.67/mo (Get 49% Off + 3 Months FREE this Black Friday/Cyber Monday). On Android and iOS, you can get a 7-day free trial and a 30-day money-back guarantee (on all devices).

For a more in-depth analysis of this VPN, check out our ExpressVPN review.

2. Surfshark – Budget-friendly VPN for CNBC to Stream without Buffering

Surfshark is the best budget-friendly VPN to watch CNBC without buffering. Anyone who needs to save a little can go for it to enjoy CNBC at the cost of $2.05/mo (Get 84% + 2 Months FREE this Black Friday/Cyber Monday).

Surfshark offers 3200+ servers available in over 100 countries. These include 600+ servers in 25 US cities. To unblock CNBC, we connected to Surfshark’s Boston server instantly outside the United States. 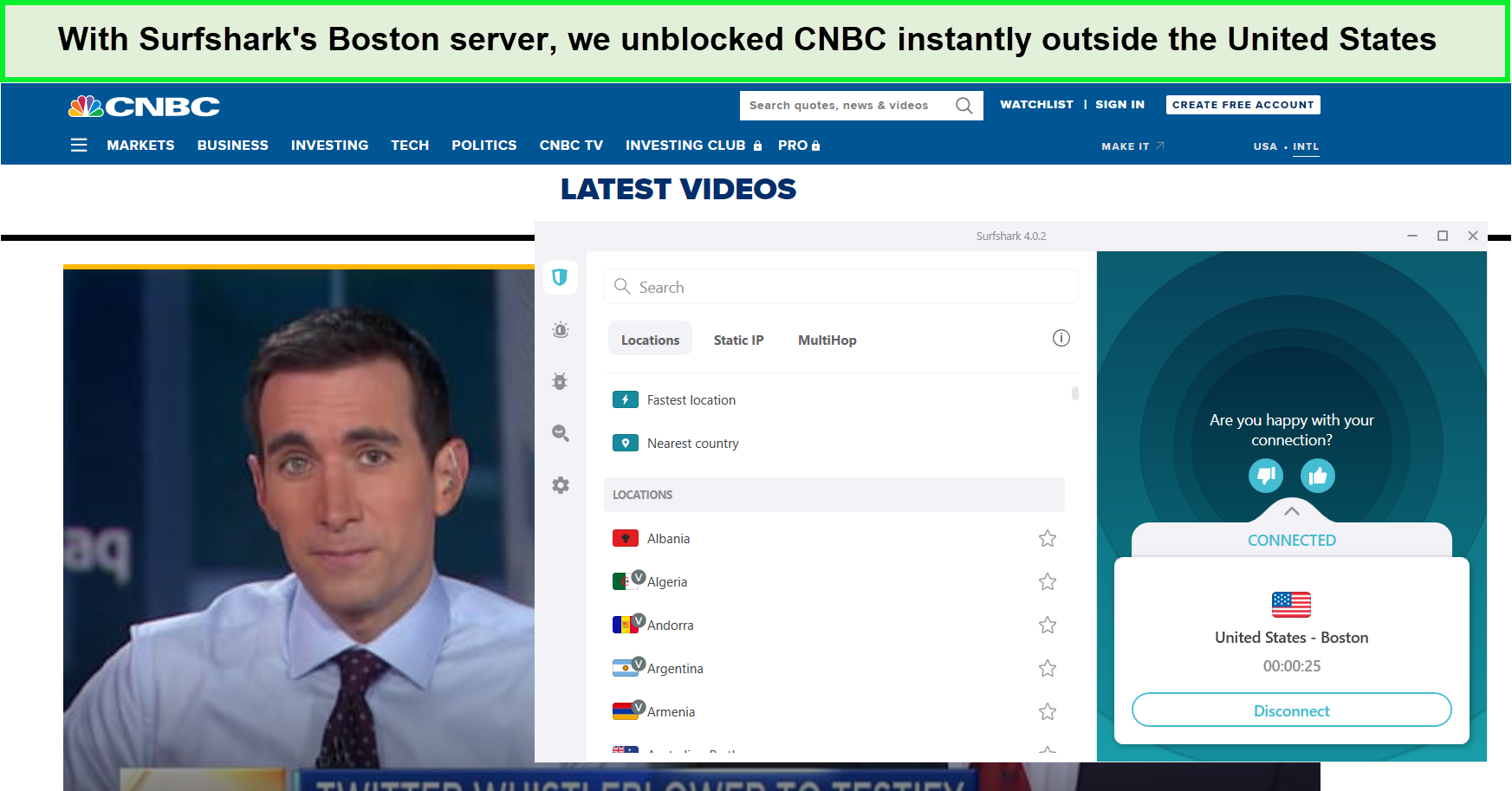 We could catch up on tech updates and the latest videos with CNBC outside US.

Surfshark’s streaming performance is great too. In our Surfshark speed test, the VPN managed to output a download speed of 86.24 Mbps and an upload speed of 53.72 Mbps on a 100 Mbps base connection.

With these speeds, we could enjoy a lag-free streaming experience on CNBC.

Surfshark is not only used to unblock CNBC. In fact, you can use it to access Epix, CW, Showtime, AMC, and Amazon Prime outside US.

When it comes to streaming, Surfshark offers unlimited simultaneous connections. It offers compatibility with devices or OS, such as Android, iOS, Apple TV, Chromecast, Roku, PlayStation, and more. We could also set up Surfshark on a router to enjoy its connection on all devices.

We reviewed Surfshark and were amazed by a feature known as “Camouflage mode.” This mode is perfect for those who want that extra bit of security as this mode makes all your VPN traffic look like normal internet traffic.

Moreover, this best VPN for CNBC also offers a 30-day money-back guarantee and a risk-free 7-day trial on mobile devices.

For a more in-depth analysis of this VPN, check out our Surfshark review.

NordVPN has the largest server network to watch CNBC in High Definition. In total, they have over 5500+ servers all around the globe, including 1970+ servers in 15 US cities.

To test it with CNBC, we connected to its Buffalo server and could easily enjoy all CNBC content, including podcasts and live streams, without issues. 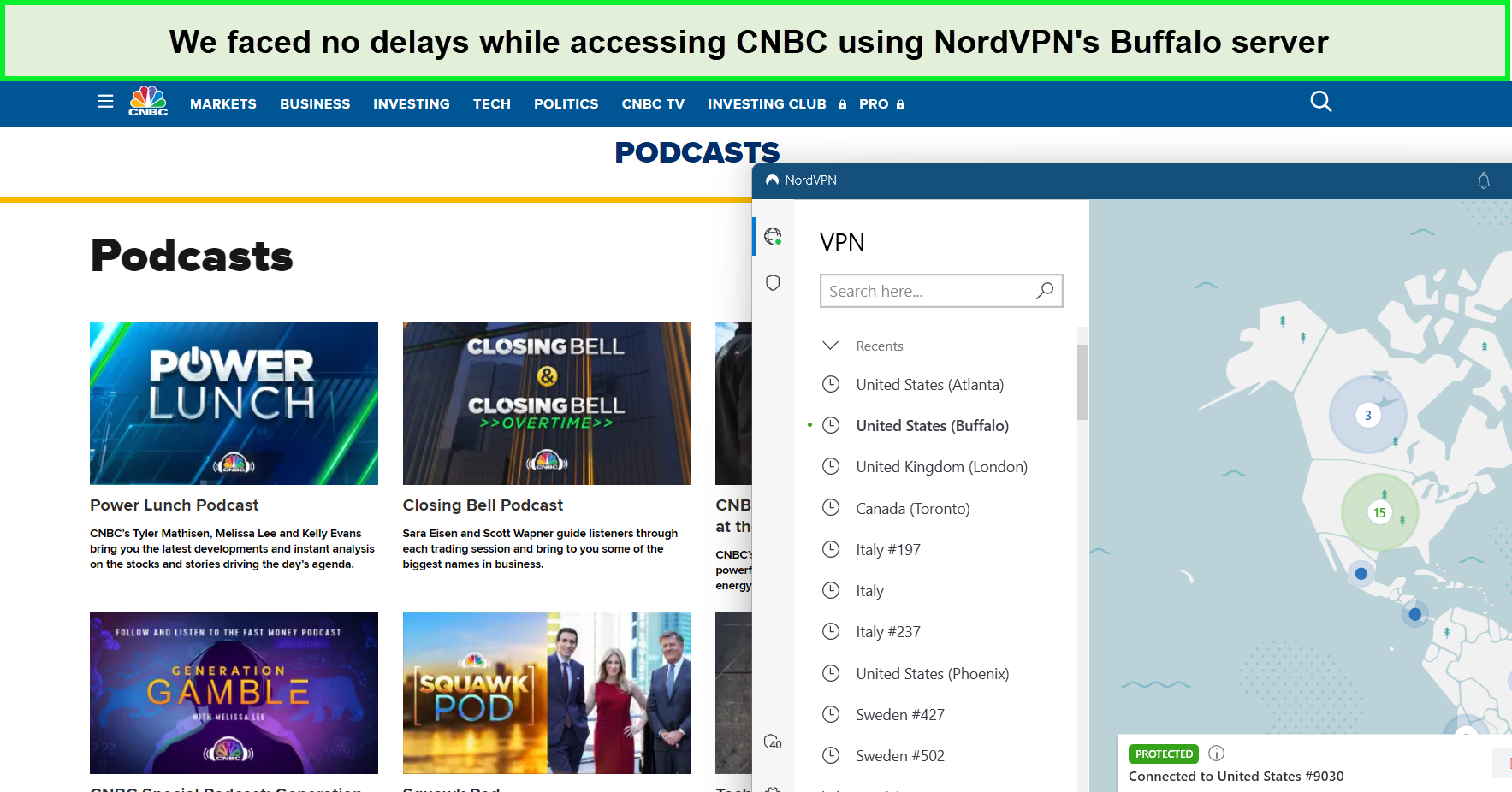 With NordVPN, we could enjoy all our favorite content without any issues.

As for speeds, NordVPN is quite fast and let us enjoy a lag-free connection on CNBC. Following our NordVPN speed test, the VPN delivered a download speed of 89.42 Mbps and an upload speed of 42.13 Mbps on a 100 Mbps connection.

These speeds were fast enough to enjoy CNBC on them.

Along with CNBC, NordVPN can also be used to unblock other US-based streaming platforms. During testing, we could unblock AMC, American Netflix, Hulu, Comedy Central, and YouTube TV outside US. Moreover, NordVPN is found to be the best VPN for CNN GO.

To continue, NordVPN is on par with security too. It comes with multiple security features, such as a kill switch, which disconnects the VPN as soon as it detects that the connection has become unstable. It also has a strict no-logs policy, which means that your activity is not being tracked at all.

You can get NordVPN at a very reasonable price of $3.69/mo (Get 55% Off + 2 Months FREE this Black Friday/Cyber Monday). It also offers a 30-day money-back guarantee, if you thinking about how to watch CNBC free.

For a more in-depth analysis of this VPN, check out our NordVPN review.

Methodology: How we Choose the Best VPN for CNBC Outside USA

For accessing CNBC, we put a lot of VPNs through rigorous testing and came up with the best VPN for CNBC mentioned above. Here is the criteria we used to choose them:

CNBC Not Working with a VPN?

You may encounter a possibility where CNBC may stop working with a VPN. This can be due to various minor reasons. So, instead of worrying, we recommend you try out the following troubleshooting tips to fix this issue:

Why do I need a VPN for CNBC?

CNBC is a geo-restricted channel available in the United States only. However, a virtual private network helps you circumvent those geo-blocks so that you can unblock your favorite content from the US. If you wish to stream CNBC outside US, then a VPN will grant you instant access.

How a VPN helps you watch CNBC from outside the USA?

A VPN masks your actual IP address and connects you to a virtual US server. This way, CNBC gets tricked into believing that you’re accessing the platform from within the US and lets you unblock it instantly.

Can a free VPN be used to watch CNBC outside USA?

Yes, you can use a free VPN for CNBC, but strongly advise against it. To start, they are plainly unsafe due to shady practices and no assurance of encryption or a no-log policy. They also have fewer servers, are slower, and, in some cases, install malware such as a keylogger on your system.

So, instead of thinking about how to get CNBC Pro for free, we highly recommend using a premium VPN’s 30-day money-back guarantee so you can enjoy its free service for a month without any risks.

How to Use a VPN with CNBC?

Here’s how to use a VPN with CNBC:

Now that you’re armed with all the knowledge of which VPN is the best and what exactly you need to do to watch CNBC live, you can go ahead and tune in.

And if you’re traveling outside the US and have already paid the CNBC subscription cost, then you just need to sit back, relax, and enjoy the platform using the above method. Amongst all our recommended VPNs, we suggest you opt for ExpressVPN, thanks to its 25+ US server locations, excellent unblocking capabilities, and blazing-fast speeds.

We hope you liked our best VPN for CNBC guide. Happy Streaming!