Best VPN for Australian Open in US in 2023 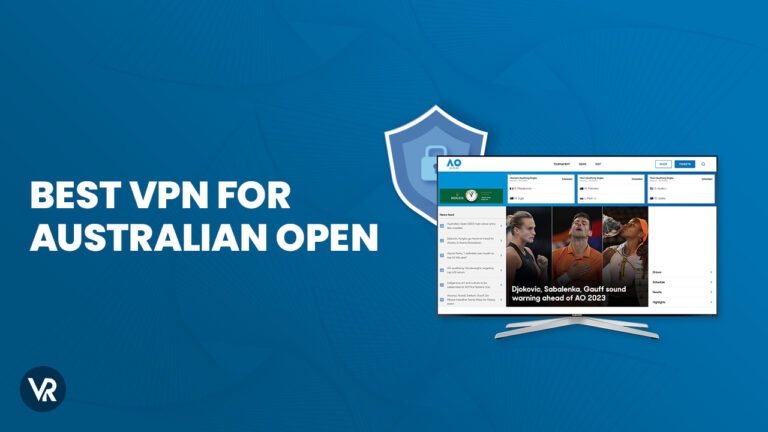 Nothing beats the excitement and thrill of high-intensity tennis matches at the Australian Open. The first Grand Slam of 2023 is slated to commence on Monday, 16th January, and will conclude with the mega final on Sunday, 29th January. The event will be available for live streaming on 9Now (Channel 9) free of cost.

Sadly, the coverage of the Australian Open on 9Now will be exclusively available in Australia due to geo-restrictions. So, you will need the best VPN for Australian Open in US for guaranteed access to watch your favorite tennis stars going head-to-head to clinch the title.

All of the tennis’ big names and the rising prodigies are gathering at Melbourne Park, Australia to compete for glory. The Men’s defending champion Rafael Nadal will be hoping for his 23rd Grand Slam title. Whereas, current Women’s No. 1 star Iga Swiatek will go all guns blazing for her fourth major title.

Quick Overview: Best VPN for Australian Open in US 2023

Here’s a quick overview of our recommended best VPN for Australian Open in US 2023:

How we chose the best Australian Open VPNs in US | FAQs

Why is a VPN required for Australian Open in US?

Due to content licensing agreements and streaming rights, coverage of the Australian Open 2023 is not available in every country. If you are currently in the United States and looking to stream 9Now (Channel 9), your access will be blocked. To overcome such regional blocking, a VPN is required for Australian Open in US.

When you try to stream Live TV on 9Now, it goes into an unlimited loop of loading unless you have an Australian IP address: 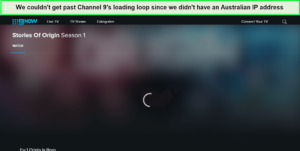 We kept waiting but the video didn’t start.

But don’t lose hope! You can use a premium VPN service to unblock the live coverage of the Australian Open in the United States.

A VPN works by masking your actual location and assigning you a new IP address located in your desired location. For instance, you can connect to a VPN server in Australia to trick 9Now into thinking that you are currently located within its area of coverage. This location hack will let you stream Australian Open and enjoy the best tennis stars playing top-level tennis at Melbourne Park.

The best VPN for bypassing regional restrictions is ExpressVPN, as it is powered by extraordinary unblocking capabilities and a huge server network in the USA.

3 Best VPNs for Australian Open in US – Detail Analysis

You can easily stream Australian Open with VPN apps. However, choosing the best VPN for streaming geo-restricted content can be tricky because not all VPNs can pull off this feat. Therefore, we tested 60+ VPN services and shortlisted the 3 best VPNs for Australian Open in US. Here’s a detailed analysis of our recommended apps:

1. ExpressVPN – Best VPN for Australian Open in US

ExpressVPN is unbeatable in terms of speed and reliability, and that’s what makes it the best VPN for Australian Open in US. It offers a huge global network of 3000+ servers located in 94 countries. You can connect to its 6 server locations in Australia and can easily access live coverage of the Australian Open on 9Now in the USA. 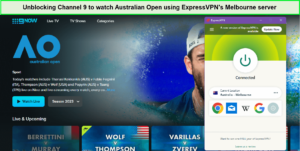 We had a blast catching up on Australian Open matches on Channel 9 using ExpressVPN servers.

The service is also capable of unblocking other Aussie sports streaming services like Stan Sport, Kayo, Foxtel, and Optus Sport in the USA.

It is known for its incredibly fast servers and we tested the speed of ExpressVPN on a 100 Mbps connection. The provided lived up to its hype by providing us with an ultra-fast downloading speed of 89.64 Mbps and an uploading speed of 84.64 Mbps. With such high speeds, you can enjoy live sporting action in ultra-HD quality.

Compatibility isn’t an issue, as you can use ExpressVPN on Android, Windows, macOS, iOS, and Linux. Its built-in MediaStreamer feature allows you to access geo-restricted content with SmartDNS settings. That means you can use it even on those devices that don’t support VPN settings. Such devices include Apple TV, Fire Stick, Chromecast, Gaming Consoles, and Roku with ExpressVPN.

Other notable features include Lightway Protocol, AES 256-Bit encryption, Network Kill Switch, DNS Leak Protection, No-Logging Policy, and TrustedServer technology. With these features, you can also use ExpressVPN for torrenting.

ExpressVPN is a bit expensive, priced at $6.67/mo (Get 49% Off + 3 Months FREE on its 12-Month Plan). However, if you aren’t worried about budget, it’s no doubt the best investment to make to watch geo-restricted content and enhance your online security.

The provider also offers a 30-day money-back guarantee. Moreover, mobile users can also enjoy a 7-day free trial with ExpressVPN. Technical support to customers is provided 24/7 via live chat option and email. Learn more in a review of ExpressVPN.

Surfshark is one of the most affordable VPNs in the market for its low-cost subscription plans. You can use all of its premium features for just $2.05/mo (Get 84% + 2 Months FREE on 2-Year Plan). It offers a powerful network of 3200+ servers in 100 countries. With its 5 Australian server locations, Surfshark is capable of unblocking 9Now where you can stream the 2023 Australian Open. 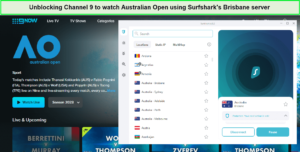 You can watch the Australian Open matches using Surfshark servers to bypass geo-restrictions on Channel 9!

This VPN can also unblock other Australian streaming services for sports, including Optus Sports, Foxtel, 10 Play, and Kayo Sports in the USA.

We tested the speed of Surfshark’s Australian servers on a 100 Mbps connection and got incredible results. This VPN can offer a top downloading speed of 81.32 Mbps and an impressive uploading speed of 76.12 Mbps.

This VPN is great for security and privacy, owing to its powerful features. This includes AES-256-Bit Encryption, WireGuard, Split-tunneling, Camouflage mode, and Multi-hop. It also offers a no-logging policy to ensure your privacy. Moreover, the Automated Kill Switch secures your IP address from leaking.

This inexpensive yet powerful VPN is a bargain deal, considering its 30-day money-back guarantee and 7-day free trial with Surfshark. Customer support is also available round-the-clock for your assistance in real time. Learn more in a review of Surfshark.

NordVPN is among the largest VPNs in terms of server count to watch the Australian Open in US. With a far-reaching network of over 5500 servers in 60 countries, including more than 190 Aussie servers, you can easily unblock 9Now and stream your favorite sports. 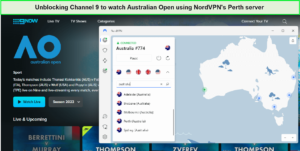 It also allows you to easily access other leading sports streaming websites like Kayo, Foxtel, Optus  Sport, Stan, and Sky Sports in the US.

This VPN is also among the fastest service providers in terms of speed. It uses Nordlynx Protocol that boosts the overall speed. We conducted a NordVPN speed test on a 100 Mbps connection and got incredible results. It offered us a lighting-fast downloading speed of 83.82 Mbps and a quick uploading speed of 44.64 Mbps.

NordVPN allows 6 simultaneous connections and can be used on all major operating systems like iOS, macOS, Windows, Android, and Linux. The provider also offers its SmartPlay tool to enable you to stream geo-blocked channels on streaming devices like Roku, Apple TV, Chromecast, Smart TVs, Gaming Consoles, and Firestick with NordVPN.

NordVPN’s price is also affordable, and you can subscribe to its 24-month plan for just $3.49/mo (Get 57% Off + 3 Months FREE on 2-Year Plan). New subscribers also get a 30-day money-back guarantee and a 7-day free trial with NordVPN. Customer support is provided 24/7 to solve the glitches. Learn more in a review of NordVPN.

Please note that the availability of the above-mentioned channels varies, and you might still be needing a premium VPN service to access these channels in the US. Moreover, the US sports streaming options need a paid subscription which makes 9Now platform the most viable option to watch the 2023 Australian Open.

How did we choose and evaluated these VPNs

VPNs are meant to provide you with added online security. Not just that, they are also used for better privacy and accessing geo-restricted content. But not all VPN apps are trusted, in fact, some of them are so notorious that you must avoid them at any cost.

FAQs – Best VPN for Australian Open in US

Is The Australian Open available on Amazon Prime or Hulu?

Yes, you can stream the Australian Open on Amazon Prime or Hulu. The good thing is that Hulu + Live TV comes with a 7-day free trial as well. However, you won’t be able to stream the entire tournament on these channels. 9Now (Channel 9) is the best option to stream The Australian Open for free, which is easily accessible through a VPN.

Can I watch The Australian Open in the US, UK, or anywhere else with a VPN?

Yes! You can easily watch the Australian Open in the US, UK, or anywhere else with a VPN. For tennis lovers living in the United States, ESPN+ will stream all the matches. Whereas, British tennis fans watch the entire tournament on Eurosport in the UK. If you are living anywhere else, you can get a VPN subscription and access 9Now (Channel 9) to stream the Australian Open

Is it legal to use VPN for Streaming Australian Open?

Yes, it’s legal to use VPN for streaming the Australian Open. However, it might be against the terms and conditions of the streaming service you are trying to access. Also, make sure to check the laws of your current country of residence regarding VPN usage before proceeding.

With the Australian Open 2023 fast approaching, you must be weighing your options to stream its live coverage. Amid geo-restrictions of streaming platforms, it’s important to find out beforehand which channel is the best option. If you are an ardent tennis fan who is looking to watch the first Grand Slam of this year in the United States, 9Now is the best streaming channel for that.

The good thing about 9Now is that it’s free of cost, however, it’s also geo-restricted. Therefore, you will need a premium VPN app to access this Australian streaming service in the US. In this guide, we have explored three different VPN service providers which are currently the best in the business.

However, based on our extensive research and personal experience, ExpressVPN is the best VPN for Australian Open in US. Not just that, this Australian Open VPN can also help you unblock a variety of streaming services from around the globe to watch your favorite content.