NordVPN vs Proton VPN in Australia: Which VPN is better? 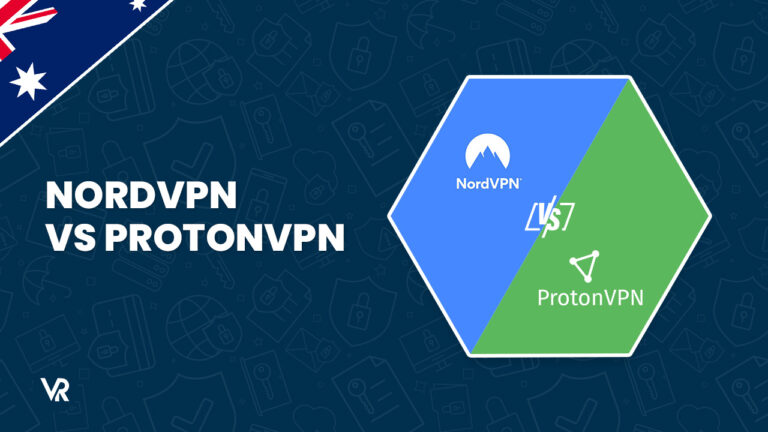 When discussing popular VPNs, the biggest names that come to mind are NordVPN and Proton VPN, and both are excellent choices. So which one should you choose? We’re here to tell you which VPN is better.

NordVPN is well known for its impressive range of features and security protocols, while Proton VPN is renowned for its strict privacy policy and advanced encryption technology. With both VPNs offering top-notch services, it can sometimes be difficult to decide which one to go with!

But don’t worry; we’ve got you covered. We’re about to compare and make a battle of NordVPN vs Proton VPN in Australia to find out a winner. So, get excited about the ultimate VPN decision. 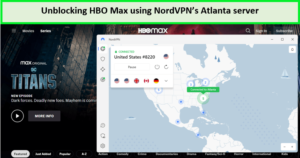 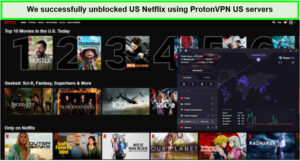 To determine which VPN performs better at streaming, we tested both on each site, and here are the results:

From this assessment, we have concluded that NordVPN is a much more reliable option for streaming geo-restricted content. The huge server count and advanced features put NordVPN on our list of the best VPNs for streaming in Australia content.

NordVPN uses the Smart DNS feature, enabling users to stream geo-restricted content on their smart TV. Also, it allows users to enjoy streaming in 4K resolution without any buffering. Moreover, we could comfortably access Netflix with NordVPN in Australia without encountering any unwarranted errors.

As for Proton VPN, it also performed well, In addition to that, it doesn’t offer the Smart DNS feature.

NordVPN and Proton VPN are affordable in terms of their subscription pricing plans. Both VPNs get cheaper as you move to longer terms. Long-term subscriptions are generally less expensive than short-term ones.

Here are the pricing plans for NordVPN: 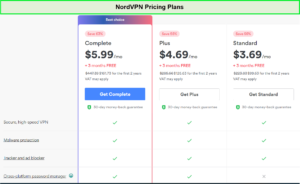 Here are the pricing plans for Proton VPN: 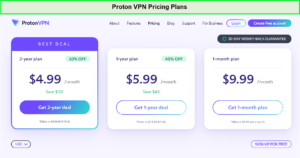 Before announcing a final winner, let’s look at the prices of both VPNs.

In this race, NordVPN again takes the lead. The longer subscriptions are truly very cheap on NordVPN’s side. On the other hand, Proton VPN is good for those who want to spend fewer bucks for a monthly subscription. In addition, you can also enjoy Proton VPN’s free version if you need to use a VPN connection for a short period. But, the free version doesn’t have all the flexibilities you might need to stream, torrent, and unblock geo-restrictions.

If we consider the payment method, NordVPN has more expandable payment options than Proton VPN. Payments for Proton VPN can be easily made using a credit card, Bitcoin, or PayPal. However, NordVPN accepts many payment methods, like credit cards, Apple Pay, Google Pay, PayPal, AmazonPay, Sofort, and some cryptocurrencies.

Both VPNs have taken high-end security measures for the better safety of their users. NordVPN and Proton VPN are undoubtedly outstanding in terms of security.

Yet, we’re up for the best among these two. So for that, we evaluated each and every single term of security. Here’s a list that will give you an idea about the security measures of these two VPNs.

Here, you can spot the difference between the security measures. However, there isn’t much difference between the two secure VPNs, as they both managed to protect your data from security breaches. It’s great to see that both VPNs have a no-logging policy, a kill switch, DNS protection, and Adblocker. Besides that, both have modern encryption technology.

The only difference here is the availability of NordVPN’s latest type of hash and RAM servers. It’s important to note that NordVPN isn’t an open-source VPN service like Proton VPN, but it does run on RAM servers. NordVPN has a newer version of Hash as compared to Proton VPN.

Although it is still a tough factor to check, we’ve analyzed both VPNs on the basis of their speed and overall performance, as many users buy these VPNs just to have a secure and fast connection. So let us move on and examine each VPN.

There’s no doubt that NordVPN speed test in Australia. Still, we tested NordVPN on NordLynx (WireGuard) protocol, and after that, we found that NordVPN is extremely fast in every region. It was an exciting experience to test NordVPN on a 100 Mbps internet connection. We received a download speed of 83.82 Mbps and an upload speed of 44.64 Mbps:

The outcomings are given as:

Proton VPN performed well, providing dependable and swift connections across the globe. But NordVPN’s speed was unmatchable. So the winner is NordVPN.

Look into the Proton speed test review for more details.

While comparing NordVPN to Proton VPN, we’re amazed by NordVPN’s features. NordVPN provides advanced security features, streaming flexibility, a large server count, a fast-speed connection, and is cheaper to get for anyone.

NordVPN is a great choice for anyone looking for a reliable and fast VPN service in Australia. NordVPN also has a large network of servers, so you can always find a fast connection no matter where you are.

It has advanced features that make it stand out from other VPN providers. One of its most unique features is its double-hop encryption, which encrypts your data twice for security. Besides, it uses strong AES-256 encryption technology that provides supremely strong surveillance against data hackers.

NordVPN has its own dedicated servers for torrenting in Australia, and you can use each server for different purposes like a dedicated P2P file-sharing server, a fast-performance server, and a strong jurisdiction server. So each server is going to help you.

NordVPN also has an ad-blocking tool that prevents annoying pop-up ads from appearing on your screen. On top of that, NordVPN has a “no-logs” policy, meaning it never records your online activities. And with its CyberSec feature, you can block malicious websites and protect your device from potential threats.

And with its 24/7 live chat support, you can get help anytime you need it. With all these features, it’s no wonder NordVPN is one of the most reliable VPN options around.

Proton VPN has a number of distinct features designed to make it a secure and reliable VPN service. Proton VPN is also a good choice because it provides almost all the same features as NordVPN.

Likewise, Proton VPN uses advanced features that include DNS protection, a strict no-logs policy, a reliable kill switch, and a secure core network. All of these features ensure your privacy and security while browsing the web.

Proton VPN offers a secure core network of servers in multiple countries, which is perfect for bypassing censorship and accessing geo-restricted content. Proton VPN features more than 1,900+ servers in more than 65 countries. Proton VPN also offers free servers in the United States, the Netherlands, and Japan.

With all these superb features, users can spend time on the internet more safely and securely.

Overall, Proton VPN is a great choice for anyone looking for an advanced, secure VPN solution. But still, there are many features that are missing in it, making NordVPN the winner.

In terms of server location, there’s not much difference between these VPNs. NordVPN offers 5500+ in almost 60 countries. Proton VPN, on the other hand, has 1900+ servers in 67 countries. As a result, Proton VPN has more server locations than NordVPN.

Here are a few servers from the list of NordVPN servers: 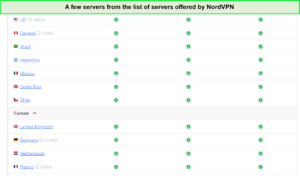 NordVPN servers span all across the globe.

Here are a few servers from the list of Proton VPN servers: 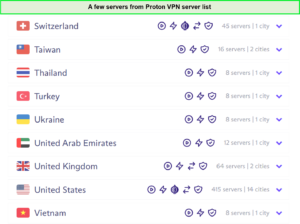 Proton VPN offers most servers in the USA.

But we’re going here to discuss all the server locations.

When it comes to server location, Proton VPN comes out on top with 67 options. However, when you take into account the number of servers, NordVPN has considerably more than Proton VPN, making the differences between the VPN networks more obvious.

Although using pirated content is not an appropriate way to use applications or watch movies. Still, many people use P2P file sharing to download and upload content. While doing this, hiding your IP from your ISP is important.

This is the reason that many people use VPNs just for torrenting, and you’ll be glad to hear that both VPNs support dedicated P2P servers for better file sharing.

NordVPN allows torrenting on its servers, and most importantly, it has some specified servers for P2P file sharing. Likewise, these servers are fast and good for torrenting. While torrenting, the service will automatically switch you to P2P dedicated servers even if you’re not on a torrent server.

In the case of Proton VPN, there are also P2P-dedicated servers, but they’re not fast enough like NordVPN. The file transfer was significantly slower than NordVPN’s speed.

After calling and engaging in live chat with the customer service of both VPNs, we have found NordVPN more reliable in terms of assisting users. 24/7 live chat support again helps NordVPN users solve problems more quickly and efficiently than Proton VPN.

So, again, NordVPN is the winner.

Is NordVPN better than Proton VPN?

Is NordVPN faster than Proton VPN?

Does NordVPN or Proton VPN offer any deals?

NordVPN vs Proton VPN in Australia – Which one wins?

Here’s a summarised version of all the features of NordVPN and Proton VPN:

NordVPN and Proton VPN both offer advanced encryption and a range of features, so we decided to compare them.

NordVPN is well-known for its fast connection speeds and extensive server network, which includes over 5500 servers in 60 countries. It also offers excellent security features such as double-hop encryption, an automatic kill switch, and a strict no-logs policy.

Proton VPN, on the other hand, offers unlimited data, high speeds, and strong encryption. It also provides access to more than 1900+ servers in 67 countries and support for Tor, P2P, and streaming services like Netflix. After evaluating each VPN on the basis of 11 different factors, we have found NordVPN to be the true winner in NordVPN vs Proton VPN in Australia.

That’s all for today. Hope you like our NordVPN vs Proton VPN comparison. If this doesn’t sort out your confusion, you can head to individual NordVPN Review Australia and Proton VPN reviews for in-depth analysis.