Kodi is an open-source, free media player that’s available for multiple devices. And if you regularly use it, then we recommend you use ExpressVPN on Kodi in Australia.

Many users like to make the most of Kodi by installing add-ons on them. And since various add-ons are not officially launched on Kodi, they may allow users to watch copyrighted content. This can get you in trouble with law enforcement if you’re caught.

To avoid that, we highly recommend opting for the premium combo of ExpressVPN Kodi in Australia, so your internet traffic is secure, and you’re away from all legal issues.

ExpressVPN establishes an encrypted tunnel between the media player and the internet so that your ISP can not intercept your online traffic and log, monitor, or even sell your streaming activity.

In this ExpressVPN Kodi in Australia setup guide, we’ll take you through all the steps using which you’ll be able to install ExpressVPN on the media player easily. So, without any further delays, Let’s get into it!

To set up ExpressVPN on Kodi, follow the steps below. Let’s not forget that ExpressVPN is the best VPN for Kodi in the industry. So, instead of looking around, you can trust this VPN with your eyes closed.

Using Windows to get the ExpressVPN Kodi in Australia combo is pretty easy if you follow the instructions carefully. There are two ways to do so:

Method 1: Set Up ExpressVPN on Kodi in Australia with a Dedicated App

Step 1: Subscribe to ExpressVPN or get the free trial (We are using ExpressVPN’s Windows app for this).

Step 3: Download and Install the VPN service on your device. 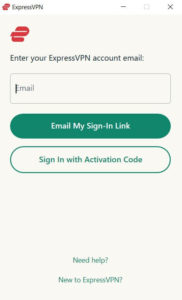 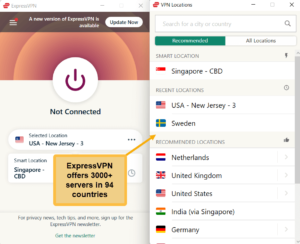 Step 6: Keep ExpressVPN running in the background and open Kodi. 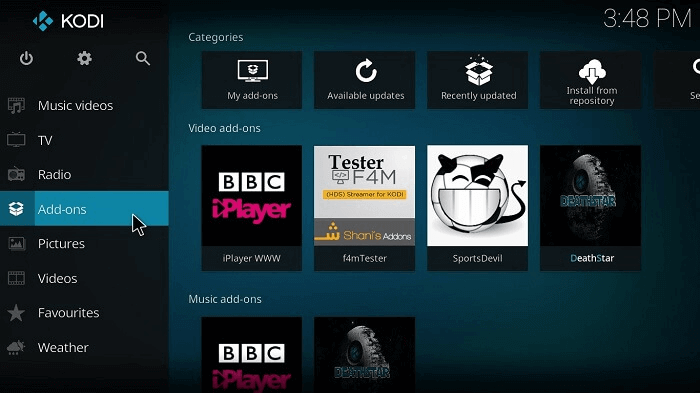 Step 7: Now launch the streaming channel or add-on using ExpressVPN on Kodi in Australia you want to see (just ensure you are connected to the right server before doing this).

Step 8: Once you’re done with the ExpressVPN Kodi in Australia setup, sit back and enjoy high-quality streams.

That’s it. With ExpressVPN running in the background, you can now launch Kodi and access any blocked content you like. Make sure you connect to ExpressVPN before launching Kodi in Australia. Otherwise, this method might not work.

Alternatively, you can also configure ExpressVPN on your router. This way, you’ll never have to worry about enabling ExpressVPN every time you wish to use Kodi. If you have an ASUS router, you can check out our ExpressVPN Asus Router guide for a detailed step-by-step setup method.

Method 2: Set Up ExpressVPN on Kodi in Australia with OpenVPN Manager Add-on

You can also install Kodi through the OpenVPN manager add-on that is easily installed with Zomboided Repository. Let’s go through the steps below:

Step 1: Download the Zomboided repository zip files on your system.

Step 3: Select the box icon on the top-left. 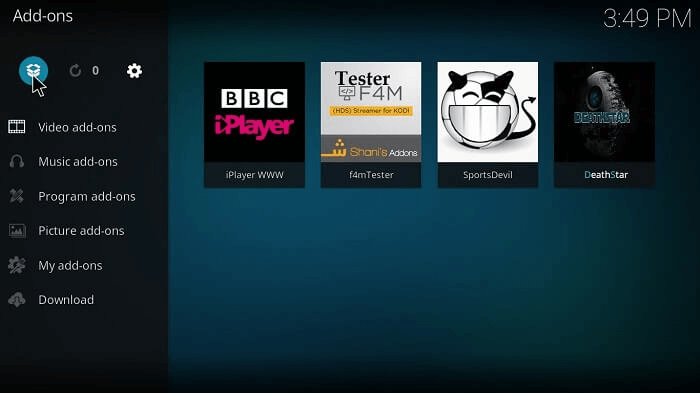 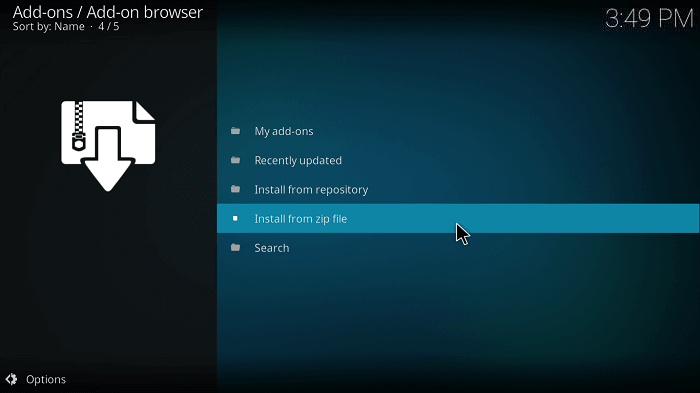 Step 5: Locate the destination where you have downloaded the Zomboided Repository zip and click on it.

Step 6: Select Install from the repository of the list. 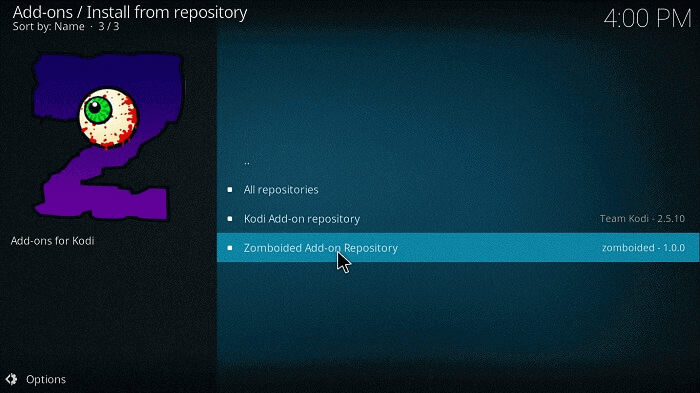 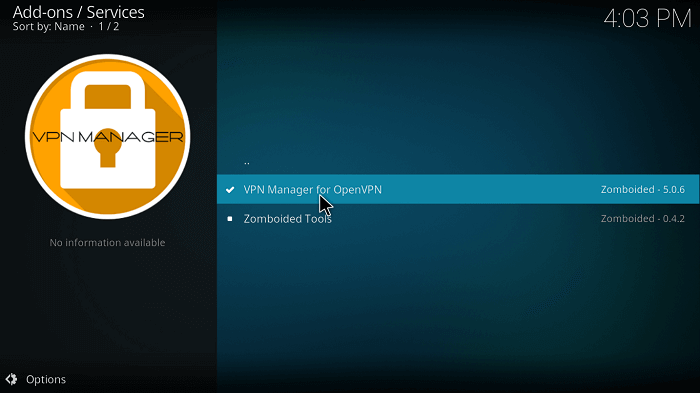 Step 8: Open Program Add-ons from the main Kodi screen and then click Settings.

That’s it. Now that you’ve set up ExpressVPN with OpenVPN Manager Addon, it is now ready for use on Kodi. You can stream blocked services as long as you stay connected to an appropriate VPN server. By the way, ExpressVPN provides an amazing service on FireStick. Here’s a guide to setting up ExpressVPN on Firestick.

If something goes wrong, you can check out our ExpressVPN not working guide. Hopefully, it should help you get rid of any issues. But as a last resort, you can always cancel your ExpressVPN subscription and get fully refunded.

Get the ExpressVPN Kodi Combo Now!30 Days Money Back Guarantee

How to Use ExpressVPN on Kodi in Australia 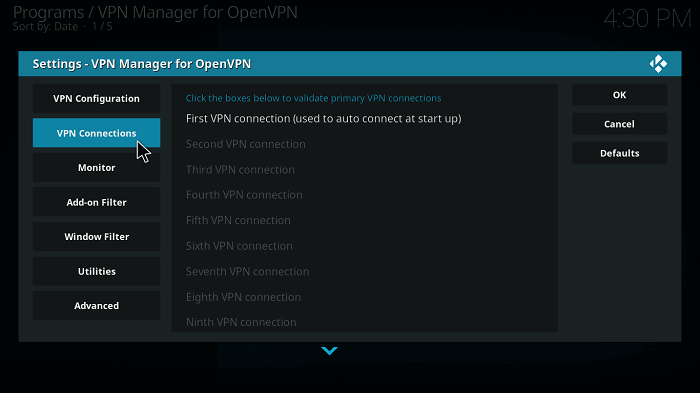 Step 4: Your login will now be authenticated by the client.

Step 5: Now click on a server of your choice when the server dialogue box opens.

And that’s it. You are now connected and logged in to ExpressVPN. That’s how easy it is to use Kodi with ExpressVPN in Australia. If you own a Roku device as well, you might want to check out our ExpressVPN Roku setup guide as well. 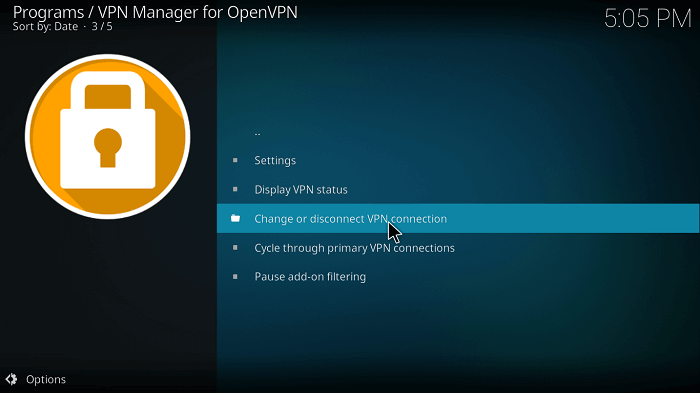 Step 3: Press “Disconnect,” and you will be logged out of ExpressVPN.

How to Change Servers on ExpressVPN

Wait for the new server to get connected on your end, and you will be on your new server in no time.

Set Up ExpressVPN with Kodi in Australia on Android

Follow the steps below and learn how to use Kodi on Android with ExpressVPN in Australia:

Step 1: Sign up for ExpressVPN and install its app on your Android device.

Step 2: Launch the ExpressVPN app and log into it using your credentials.

Step 5: Check your IP address and location to confirm that the VPN works.

Step 6: Now, launch your Kodi app and run it normally on your Android.

The same steps can be followed on your Android TV box device, provided it is compatible with ExpressVPN.

Now that you have ExpressVPN installed and know how to use it, how does it benefit you while using Kodi? Let us explain that now.

How ExpressVPN Bypasses Geo-Restrictions on Kodi in Australia

The value you can get from your Kodi is, to a great extent, curbed by geo-restrictions that prevent many channels from being accessible in your region. This greatly reduces the entertainment factor and the control you have over the amazing Kodi.

ExpressVPN delivers excellent features that penetrate restrictive walls and bring all blocked content to your screen through Kodi. With its 3000+ servers in 94 countries, including 6 servers location in Australia, you can spoof your location within a matter of a few seconds and get access to the outstanding library of add-ons available on Kodi.

Aside from that, you can also unblock popular streaming services like Netflix on the media player. Speaking of Netflix, here’s how easy it is to unblock Netflix with ExpressVPN.

ExpressVPN also allows you to add your Kodi add-ons on your Xbox and stream your favorite shows directly there. As ExpressVPN is easily configurable on Xbox, you will never have any issue with Kodi on Xbox while trying to watch geo-restricted content.

How ExpressVPN Provides Security on Kodi in Australia

ExpressVPN creates an encrypted tunnel between the internet and your Kodi device. This means that your Internet Service Provider cannot view your traffic and is unable to log, monitor, or sell your streaming activities on Kodi. ExpressVPN itself doesn’t keep any connection or activity logs so that you can use Kodi in Australia with as much protection as possible.

The Internet, in general, is full of cyber threats today. These threats exist not only in the form of viruses but also agencies snooping on your online activities. Kodi’s open-source nature permits any developer to create a new customized add-on without necessarily acquiring the legal rights to do so.

This is why a VPN is pretty important when using apps like Kodi or performing P2P file-sharing due to the legal concerns surrounding these applications.

ExpressVPN consists of a kill switch feature called Network Lock, which makes sure you stay secure even if your VPN connection gets disconnected due to any reason. You’ll get immediately disconnected from the internet, and your identity will stay totally safe.

Moreover, it uses AES 256-bit encryption that is virtually impossible to break with existing computational technology. As such, it can safeguard your online privacy while you are lost in the world of Kodi and enjoying fast streaming at the same time.

Is ExpressVPN good for Kodi in Australia?

ExpressVPN is a great VPN for Kodi in Australia if you take circumventing geo-restrictions and streaming into concern. This VPN offers robust security and is speedy enough to stream every type of content without any lags using thousands of servers.

Can I use ExpressVPN to watch more content with Kodi in Australia?

Yes, you can easily use ExpressVPN to stream more content using Kodi in Australia. That’s because the VPN allows you to bypass geo-restrictions and access a wide variety of content previously unavailable in your region.

How does ExpressVPN work with Kodi in Australia?

ExpressVPN establishes an encrypted tunnel between your Kodi device and the internet. This means that your ISP will no longer be able to read your traffic and will be unable to log, monitor, or sell your download or streaming activity. ExpressVPN keeps no activity or connection logs, allowing you to use Kodi in Australia as privately as possible.

Does Kodi work with ExpressVPN in Australia?

Yes, ExpressVPN works on Kodi in Australia. It does not keep any activity logs or connection logs, so you can use them on your Kodi device to ensure privacy. It reroutes your Kodi traffic through a proxy server, allowing you to unblock geo-restricted services.

Does ExpressVPN slow down Kodi in Australia?

Yes, just like any normal VPN in Australia, ExpressVPN may slow down your speeds by about 10-15%. But that speed drop is barely noticeable when you use the VPN to stream on Kodi in Australia. In some cases, the VPN may also bypass ISP throttling and let you enjoy a buffer-free connection on the media player.

How do I use ExpressVPN on Kodi in Australia?

Use ExpressVPN with Kodi in Australia

1-  Install and configure the ExpressVPN app.
2- In the app, select the More icon(…).
3- Connect to the VPN server of your choice.
4- Check your IP address to ensure you are successfully connected to the VPN.
5- Now open Kodi and enjoy.

ExpressVPN is an excellent VPN for Kodi in Australia when it comes to streaming and bypassing geo-restrictions. This VPN client has strong security and is fast enough to stream every content without buffering issues with thousands of VPN servers.

The setup process is fairly straightforward, especially if you follow the first method involving using the ExpressVPN app to access restricted Kodi add-ons.

Overall, ExpressVPN is one of the best choices available for users that want complete access to all Kodi add-ons anywhere in the world without facing any restrictions or geo-blocks. It offers a 30-day money-back guarantee as well.

We hope you enjoyed our ExpressVPN Kodi in Australia guide. Happy Streaming!