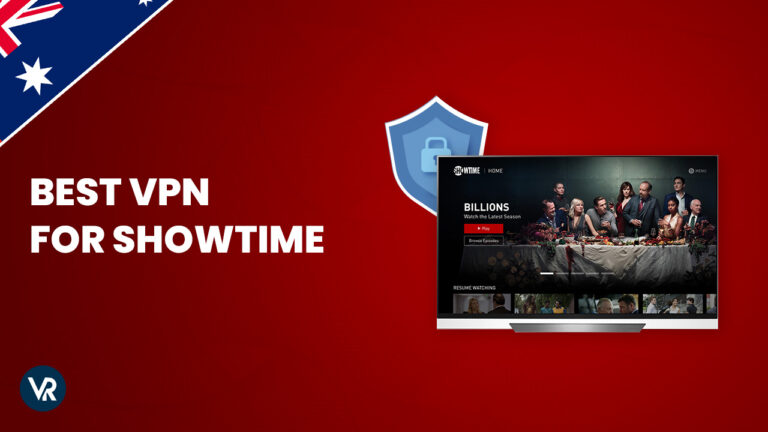 Want to catch up with your favorite Showtime shows in Australia? Read on as we discuss the best VPN for Showtime in Australia that can get the job done at warp speed!

Showtime is one of the popular US-based cable and satellite television networks that can be streamed in Australia with a VPN. boasting a large catalog of exclusive movies and TV shows such as Yellow Jacket, The Man Who Fell To Earth, and The First Lady. In 2015, Showtime evolved into a standalone VOD service, allowing cord-cutters to access its content without a cable subscription.

Unfortunately, like many streaming services, Showtime is bound by copyright policies and is only available to those with a US IP address. As a result, viewers trying to log in from Australia won’t be able to watch Showtime unless they use a reliable VPN such as ExpressVPN.

Acting like a true savior, a VPN routes your traffic flowing to and from your device through an intermediary server based in the US. This makes it seem like you’re accessing Showtime from within the American territories while living in Australia.

Sounds fascinating, right? Let’s dig in further to discover the best VPN for showtime that lets you stream its content in Australia

Quick Overview: The Best VPN for Showtime in Australia

Watch Showtime in Australia with ExpressVPN

Criteria for Selecting a VPN for Showtime in Australia

We have shortlisted the 3 best VPNs for Showtime that work flawlessly in Australia. All of these VPNs are shortlisted on the basis of the following factors:

Note: If you choose to ignore these factors before selecting a VPN provider, you may come across the issue of ‘Showtime not working with a VPN in Australia‘.

After testing 40+ VPN services for their unblocking capabilities, speeds, device compatibility, and security, we have shortlisted the 3 best VPNs to unblock Showtime in Australia.

Let’s discuss each one of them in detail below.

ExpressVPN is the overall best VPN to unblock Showtime in Australia. The VPN offers utmost security, strong unblocking capabilities and ultra HD quality. It provides a blazing fast download speed of 87.18 Mbps and an upload speed of 52.13 Mbps. (check out our speed test below)

It offers 3000+ servers in 94 countries, including 25 server locations in the United States in Australia in popular cities like New York, Los Angeles, Dallas, Atlanta, Chicago, Miami, and more.

To check its unblocking capabilities in Australia, we connected to ExpressVPN – New York server. We were able to unblock Showtime instantly and stream ‘The Man Who Fell to Earth” in HD playback quality. 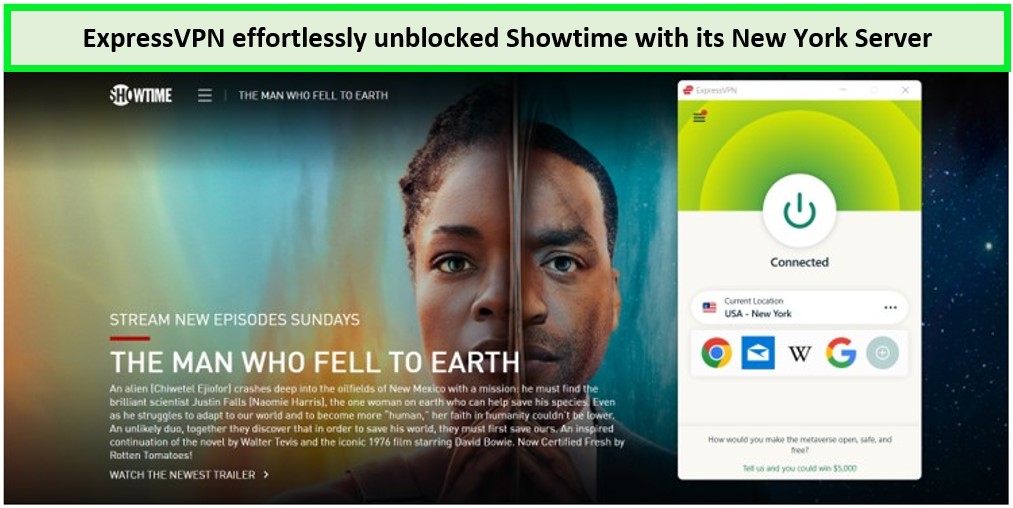 We had a bufferless streaming experience with ExpressVPN’s New York server in Australia.

Besides Showtime, ExpressVPN also works with Cw TV, Amazon Prime, Hulu, Netflix, and many other streaming services in Australia. if you want to experience amazing Indian content then you can also unblock Sonyliv in Australia with ExpressVPN. It is also known as the best VPN for FXNOW in Australia and Investigation Discovery in Australia.

Moreover, ExpressVPN offers a Smart DNS MediaStreamer feature. It lets you bypass geo-blocks in Australia without compromising on speeds. The feature allows you to unblock Showtime on devices that don’t have native VPN support.

We conducted ExpressVPN speed test and recorded a download speed of 87.18 Mbps and an upload speed of 52.13 Mbps on a 100 Mbps connection.

It means that you can use ExpressVPN on all popular devices like FireStick, Samsung Smart TV,  Roku, PS4, and more. ExpressVPN allows up to five simultaneous connections. You can enjoy ExpressVPN on a range of operating systems including macOS, Windows, iOS, Android, and Linux.

When it comes to security, ExpressVPN offers robust security with its 256-bit AES encryption. The kill switch ensures no activity leaks whereas, DNS leak protection keeps your identity hidden. This means that your original IP address won’t be leaked to Showtime and you can enjoy fast and smooth streaming without any interruptions.

Surfshark is the most budget-friendly VPN to access Showtime in Australia. It offers incredible features at a price of just AU$2.87/mo (US$ 2.05/mo) (Get 84% + 2 Months FREE on 2-Year Plan) with a 30-day money-back guarantee.

It offers decent unblocking capabilities in Australia, which makes it ideal for Showtime streaming. It banks a server network of 3200 in 100 with around 600+ servers in the US alone.

When tested for unblocking capabilities in Australia, we connected to the US – Detroit server and could easily access Showtime. We enjoyed smooth streaming of “Dexter: The New World.”

We faced no buffers nor any Showtime PPV server error when connected to Detroit server in Australia.

As per our Surfshark speed test, it delivered 81.32 Mbps of download speed and 76.12 Mbps of upload speed on a 100 Mbps connection.

The VPN is compatible with numerous devices including Roku, PS4, Xbox, Nvidia Shield, FireStick, and more in Australia. So, whether you want to stream Showtime on Smart TV, or catch up on your favorite shows on a smartphone, Surfshark has got you covered in Australia.

Another notable feature of Surfshark is that it allows unlimited simultaneous connections per account. Isn’t it ideal for household streamers? It offers apps for various operating systems as well such as macOS, Windows, Linux, iOS, and Android.

Even though it is a low-cost VPN, it offers an outstanding suite of security features. Surfshark performs well in ensuring anonymity and keeping you secure. To prevent monitoring, its Camouflage mode portrays your VPN traffic as usual internet traffic.

Surfshark uses AES-256 encryption, private DNS, and OpenVPN protocols. Its MultiHop feature prevents your ISP from decrypting your connection, thanks to the VPN’s multi-layer protection.

You can avail Surfshark’s free trial, available for Android and iOS along with a risk-free-30-day money-back guarantee before committing to it permanently.

Want to know more about it? Check out our detailed Surfshark review to help you make up your mind.

NordVPN is the largest server network VPN for Showtime, powered by 5500 servers in 60 countries, along with 1970+ servers in 15 US locations which is good to unblock Showtime in Australia

To test its unblocking capabilities in Australia, we connected to its US – Atlanta server to stream Showtime in Australia and were able to stream the entire season of “I Love that For You” on Showtime without facing any buffers, not even once! 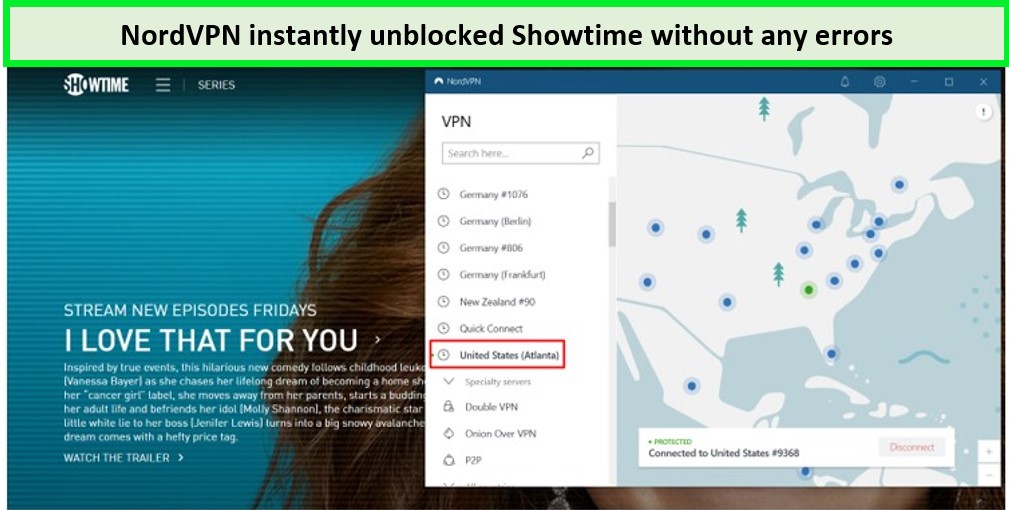 NordVPN Atlanta server lets us stream ‘I love that for you’ on Showtime in 4K quality with consistent speeds in Australia.

Besides Showtime, you can also use NordVPN to unblock various other streaming platforms in Australia such as Amazon Prime Video, Vudu, Crackle, and more. All you need is to change your IP address with NordVPN and you’re good to go. In our tests, it also turned out to be the Best VPN for Fx TV in Australia.

As per NordVPN speed test results, NordVPN offered us a download speed of 86.18 Mbps and an upload speed of 42.13 Mbps when tested on a 100 Mbps connection to stream Showtime in NordVPN.

The speed drop of almost 16% was relatively low with NordVPN in Australia.

NordVPN can be downloaded on a wide variety of devices like Smart TVs, Roku, routers, FireStick, PS4, and more. Users can avail of up to six simultaneous connections per account and enjoy Showtime on multiple devices in Australia.

Similarly, you can use NordVPN on a range of operating systems including Windows, Linux, iOS, macOS, Android, and more.

NordVPN offers strong security, thanks to its AES with 256-bit keys. Currently, there is no technology that can break this encryption. Its Obfuscation technology easily hides and makes your VPN traffic look like normal traffic, preventing anyone from snooping into your connection.

To avoid IP leaks, it offers a kill switch and DNS/WebRTC leak protection. For secure access to all types of content, NordVPN offers a DNS-style feature called Smart Play, seamlessly implemented in their app so there’s nothing to update, set up or activate. All you need is to connect to the right VPN server and enjoy your favorite content in Australia.

Why Do You Need a VPN to Watch Showtime in Australia?

Despite Showtime’s popularity in Australia, it is only available to viewers within the US. This is due to licensing and geo-blocking laws. Therefore, to watch Showtime in Australia and bypass these restrictions, you would need the assistance of a reliable VPN like ExpressVPN.

A VPN helps change your IP address and makes it seem like you’re accessing from the US territories while living or travelling in Australia.

Otherwise, if you try to access Showtime in Australia without vpn, you are interrupted by the following error message:

You cannot access Showtime in Australia without a VPN.

However, it’s worth noting that not all VPNs have the ability to bypass geo-blocks in Australia. Therefore, avoid investing time and money on other VPNs and opt for the best VPNs for Showtime in Australia as recommended above. After all, a low-quality VPN may lead to serious security and privacy risks and may leave you worse off.

Showtime Not Working With VPN in Australia: Fixes

If you have encountered a similar issue, here are some solutions to fix it:

How Do I Get Showtime in Australia?

Follow these five simple steps to get Showtime outside the US:

Watch Showtime in Australia with ExpressVPN

Does Showtime block VPN in Australia?

No, Showtime doesn’t have the ability to block a VPN in its entirety in Australia. However, it can block the IP address provided by your VPN service. You can simply switch to a different server to fix this issue.

On what devices can I stream Showtime in Australia with VPN?

You can stream Showtime in Australia with a VPN on the following devices:

Does ExpressVPN work with Showtime in Australia?

Sure it does! ExpressVPN works tremendously well with Showtime in Australia, along with other popular streaming services like Disney+, HBO, Netflix, and Hulu.

Can you watch Showtime free with VPN in Australia?

Yes, you can watch Showtime free without a cable subscription using a Showtime VPN service in Australia. With your device connected to a VPN, you can stream your favorite shows anytime and from anywhere you want. However, a free VPN provider is not recommended due to security and privacy concerns. Therefore, it’s in your best interest if you stick with a premium provider such as ExpressVPN.

Showtime has been in demand  in Australia for its extremely interesting catalog consisting of exclusive movies and binge-worthy shows.

Unfortunately, Showtime is also affected by geo-restrictions and cannot be accessed in Australia without VPN. That’s when the best VPN for Showtime in Australia comes into action, altering your digital location, and making its entire library accessible in Australia.

However, not every VPN can do this job effectively so we have tested numerous VPN providers and found the 3 best VPNs highly effective with Showtime to unblock in Australia. Among them, ExpressVPN stands out as the best Showtime VPN for its outstanding unblocking power, strong security, high speeds, and impeccable streaming facilities in Australia. It also ranked top when we tried using it for Bravo TV which you can check out on our blog “Best VPN for Bravo TV“.