How to Watch Sky GO in Australia [Proven and Easy Access] 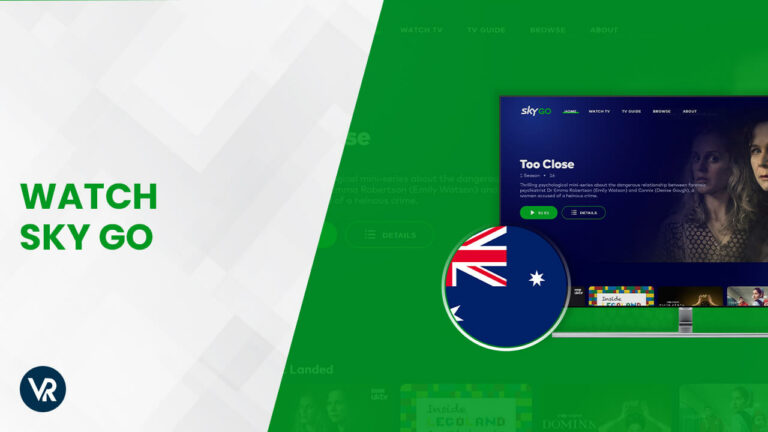 Sky Go is a top streaming service in the UK with some of the best exclusive shows and much more. However, it is geo-restricted and can only be accessed within the UK. Therefore, if you’re wondering how to watch Sky Go in Australia 2023 on your device, you need to get a UK IP address. That’s where a reputable VPN service can help you!

So, a VPN will mask your real IP address and trick Sky Go into thinking that you are trying to watch it from within the UK – thus giving full unrestricted access. Would you like to give it a go? Read on!

How to Watch Sky Go in Australia? (Step-by-Step)

Follow these steps to learn how to watch Sky Go in Australia with a VPN:

Why You Need a VPN to Stream Sky Go in Australia?

You need a VPN to stream Sky Go in Australia because the streaming channel is only available in the UK due to geo-restrictions on its content in compliance with copyright laws and distribution rights. Unless you’re located within the UK, you’ll not be able to access Sky Go content in Australia.

That’s why, Sky Go is blocked in Australia. If you try to access it from within Australia without a VPN, you will see the following error message on your screen:

“Sky Go is only available to users connecting from within the UK or Republic of Ireland; unfortunately, we cannot confirm that you are within these territories at the moment. Please retry later.”

So if you’re wondering, ‘how to get Sky Go in Australia?’ and bypass this geo-restriction error, you need to connect to a UK server to be able to unblock Sky Go’s content in Australia, and we believe there’s no VPN that’d do an amazing job as well as ExpressVPN.

Here is a list of some of the best VPNs to watch Sky Go in Australia: 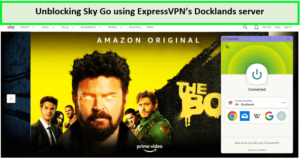 This premium VPN also offers unlimited bandwidth with high download and upload speed connections and is one of the fastest VPNs in the industry, so you will not face any issues during streaming in Australia. Based on our ExpressVPN speed tests for all its servers, we received a download speed of 88.78 Mbps and an upload speed of 54.22 Mbps on a 100 Mbps internet connection.

ExpressVPN’s speed test results when connected on a 100 Mbps connection.

ExpressVPN on Android TV in Australia worked perfectly well for us. Furthermore, ExpressVPN allows you to connect up to 5 devices simultaneously. You can access this from ExpressVPN’s DNS Settings page. 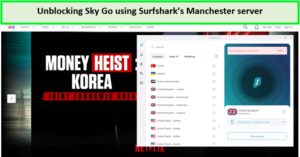 Using Surfshark servers, we could bypass geo-restrictions on Sky Go within seconds.

You can also unblock DStv in Australia and other international channels with Surfshark. Including EuroSport, ITV, BBC iPlayer, Disney+ Hotstar, Netflix Germany, and others.

Surfshark also offers reliable connection speeds for streaming Sky TV in Australia in HD quality. On our Surfshark speed test, we received a download speed of 86.24 Mbps and an upload speed of 53.72 Mbps on a 100 Mbps connection.

What’s best is that Surfshark supports unlimited simultaneous connections, so you can watch Sky Go and other British Channels in Australia on multiple devices simultaneously. It also offers apps for mobile devices (iOS and Android), so you can easily enjoy Sky’s content on Firestick using Surfshark.

NordVPN is the largest server network VPN for watching Sky Go, thanks to its huge network of VPNs of 3200+ servers in 100+ countries, and 4 server locations in NordVPN;  London, Edinburgh, Glasgow, and Manchester.

During testing, it gave excellent download speeds for streaming on most of its UK servers. While using NordVPN’s London server, we faced no issues which interrupted our HD streaming in Australia: 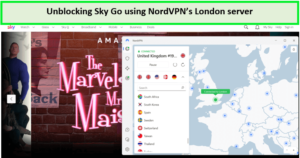 NordVPN servers unblocked Sky Go for us without running into any issues.

NordVPN is a great choice for unblocking geo-restricted streaming platforms from anywhere in Australia. To watch Sky Go, you can connect to any server in the UK. Based on our NordVPN speed test results yielded a download speed of 86.55 Mbps and an upload speed of 49.42 Mbps on a 100 Mbps internet connection.

NordVPN’s speed test results when connected to the fastest UK server on a 100 Mbps connection.

It is compatible with all the usual operating systems and platforms, such as macOS, Windows, Android, iOS, Linux, etc. You may also use NordVPN on PlayStation, Chromecast, Xbox, and many other devices. You can connect up to six devices on a single account.

NordVPN also offers many security features, such as obfuscated servers, a kill switch, an ad-blocker, a malware blocker, Onion Over VPN, and many more.

A single subscription costs AU$ 4.95/mo (US$ 3.49/mo) (Get 57% Off + 3 Months FREE on 2-Year Plan) and comes with a 30-day money-back guarantee and live chat support. Get NordVPN’s free trial if you’re unsure about subscribing to its services. You can read our latest NordVPN review for more details.

Can I Use a Free VPN to watch Sky Go in Australia?

Yes, you can use a free VPN to watch Sky Go in Australia; however, we don’t recommend it. Firstly, most free VPNs provide an inadequate amount of bandwidth for every subscription. As a result, it’s never enough for you to stream and torrent.

Secondly, the servers often get crowded quickly, because of which users may receive poor speeds, hence affecting your video quality. Thirdly, free VPNs jeopardize your privacy and security as your device becomes vulnerable to malware and other cyberattacks in Australia.

How Much Does Sky Go Cost in Australia?

Note: Prices are subject to change over time.

Sky Go is compatible with the following devices:

Watch Sky Go on your Windows or Mac PC in Australia

To watch Sky on your Windows on Mac PC, simply follow the steps given below:

To watch Sky Go in Australia online on an Android device, simply follow the steps given below:

Note: Make sure to clear your Google Play Store app cache before you download the Sky Go app.

To watch Sky Go on your iOS device in Australia, follow the steps given below:

Can I watch Sky Go on Roku in Australia?

No, Sky Go is not available on Roku. To watch it, you must screen mirror the Sky Go app from your PC or smartphone. You can Mirror Sky Go on Roku using Windows, macOS, iOS, and Android devices.

Follow these steps below to screen mirror Sky Go to Roku in Australia with Windows PC:

Mirror Sky Go on Roku with Android in Australia

Follow these steps to mirror Sky Go on Roku with your Android device:

Mirror Sky Go on Roku with iOS in Australia

To mirror Sky Go on Roku with iOS, you first need to enable AirPlay on Roku. To do that, follow these steps:

After that follow these steps to screen mirror Roku from your iPhone or iPad:

Sky Go has more than 100 channels from all genres, including sports, news, entertainment, and more. Here are some of the best live-streaming channels on Sky Go:

What Can I Watch on Sky Go in Australia?

There are lots of exciting shows and movies that you can watch on Sky Go in Australia with a VPN.

Here are some of the popular shows that you can watch on Sky Go in Australia:

Here are some of the popular movies that you can watch on Sky Go in Australia:

The Sky Go app is only available to users connecting from the UK and Ireland. Unfortunately, it is not available in other territories. However, to watch your favorite shows and movies on the Sky Go app, it can work for you in Australia if you use a premium VPN like ExpressVPN.

Is it illegal to watch Sky Go with a VPN in Australia?

No, it is not illegal to access Sky Go with a VPN in Australia. Using a VPN to unblock streaming sites in Australia is perfectly legal. Although it may go against the Terms and Conditions of Sky Go, you can’t be held legally responsible for violating them.

Is Sky TV available in Australia?

No, Sky TV is not available in Australia. However, to bypass Sky’s geo-restrictions, you need a VPN. Simply sign up for a premium VPN like ExpressVPN and connect to a UK server. Within seconds, you’ll be able to watch Sky TV content in Australia.

Can you get a virus while using a VPN to access Sky Go in Australia?

No, you cannot get a virus using a VPN to access Sky Go in Australia, as the chances of that happening are very low. Usually, a premium VPN like ExpressVPN provides strong security and privacy measures to prevent any potential cyberattacks on your system while streaming Sky Go in Australia.

How can I watch Sky TV without a Sky subscription in Australia?

You can watch Sky TV without a Sky subscription in only two ways; subscribe to a Sky TV package or sign up for an Entertainment Pass to Sky’s standalone streaming service.

How many users can watch Sky Go simultaneously in Australia?

Two users can watch Sky Go simultaneously with one subscription. So, Sky TV subscribers can enjoy watching Sky content on 2 screens simultaneously. You can also share your Sky TV account with friends and family.

Sky Go has an amazing content library with on-demand movies, shows, live sports, and many more channels. Some of its popular shows are Penny Dreadful, Broadwalk Empire, True Detectives, Chornobyl, and more.

So if you’re still wondering, ‘can I watch Sky Go in Australia?’ To answer your query, yes, you can! Just follow our simple guide to unblock Sky TV in Australia. All you need is a virtual private network (VPN) that offers servers in the UK.

We highly recommend getting ExpressVPN as it offers 5+ UK server locations and the best speeds for streaming in Ultra HD without lags. It also offers a 30-day money-back guarantee and a 3-month FREE subscription on its 12-monthly plan.

If you face any issues, let us know in the comments below.