How to Watch UK TVPlayer Outside UK [Updated – April 2022]

Do you want to watch UK TVPlayer as you live outside the UK or plan to travel abroad? To achieve that goal, you will require a UK IP address or a VPN that offers servers in the UK.

UK TVPlayer is currently accessible by the people in the UK. However, if you try to access UK TVPlayer outside the UK without a VPN, you will see this error message:

“Sorry. TVPlayer is currently only available in the United Kingdom.”

But don’t you worry, in this blog, we will tell you how to unblock UK TVPlayer outside the UK with the help of a VPN and tell you the best VPN for watching TV Player abroad.

How to Watch UK TVPlayer Outside UK? [Easy Steps]

Follow these simple steps to unblock UK TVPlayer Outside UK:

Why do you need a VPN to watch UK TVPlayer outside the UK?

Unfortunately, UK TVPlayer is available to viewers inside the United Kingdom. However, as a foreign viewer, You can enjoy the service on your web browser or its official app on different devices, including Amazon Fire TV Stick, iOS, Android, Smart TVs, Windows, Roku, Xbox One, and Apple TV.

If you wish to obtain unlimited access to your favorite TV shows and Live British Television on TVP Player UK, you need to set up a VPN on your device.

A VPN will mask your actual location and IP address with its own UK IP address and let you overcome the geo-block, and let you freely watch UK tv online outside of the UK. Moreover, you can also access various other UK-based streaming services such as British iPlayer, Disney Life, Channel 4, and more.

Best VPNs To Watch UK TVPlayer Outside The UK

ExpressVPN is the best VPN to watch UK TVPlayer outside the UK. Operating since 2009, it has developed a reputation for being the most reliable and trustworthy VPN service for streaming, torrenting, online gaming, and secure browsing due to its marvellous VPN capabilities.

During our testing, we were able to get unlimited access to UK TVPlayer. In addition, we streamed similar streaming services such as Hulu, Netflix, HBO, BBC iPlayer, Amazon Prime Video, DAZN Disney+, and Youtube TV in UK.

As for the VPN connection speeds, ExpressVPN left all of us in awe with average speeds of 85.84 Mbps on a 100 Mbps base connection. Due to such lightning-fast connection speeds, all of our UK TVPlayer streams outside the UK were in Ultra-HD and HD video quality.

ExpressVPN headquarters are located in the British Virgin Islands, so the provider doesn’t have to abide by mandatory data retention laws.

You can also use a single ExpressVPN account on five devices simultaneously. It is also easily compatible with popular devices such as Mac, Windows, Android, iOS, Roku, Linux, router, and more.

All these features come at a price of $6.67/mo (Get 49% Off + 3 Months FREE this Black Friday/Cyber Monday), and there is a 30-day money-back guarantee, so you test the service free of cost for 30 days.

You can read more about this provider in our ExpressVPN review.

Surfshark is a budget-friendly VPN for watching UK TVPlayer outside UK. With various affordable VPN subscription plans, Surfshark has quickly found its place in the hearts of millions of VPN users worldwide.

These servers can successfully unblock all major streaming websites, be it Netflix, TVPlayer or BBC iPlayer, UKTV, BT-Sport, or any other website. You can also enjoy watching HBO Max with Surfshark. The user experience and the client software both are well designed and simplistic so that anyone can use them without confusion.

At a very affordable price of just $2.05/mo (Get 84% + 2 Months FREE this Black Friday/Cyber Monday), this is the best VPN service you can get for watching UK TVPlayer outside the UK. All of Surfshark’s premium subscription comes with a 30-day money-back guarantee as well.

So if you’re not willing to spend too much and accessing blocked websites is your main concern, then this is the perfect choice for you! Despite being new in the industry, the service has made a name by offering great service!

You can learn more about this provider in our Surfshark review.

Get Surfshark For UK TVPlayer

NordVPN is a secure VPN for watching UK TVPlayer outside the UK. In the VPN industry at the moment, NordVPN is one of the most secure and highly encrypted VPN providers due to its stockpile of several advanced security and privacy features.

NordVPN’s server network consists of 5500+ servers in 59 countries including 440+ servers in London alone. While some may think that a provider who focuses more on security may not deliver when it comes to streaming, that isn’t the case at all.

With over 400 servers in London, we were able to bypass UK TVPlayer geo-restrictions easily. Also, we got unrestricted access to Netflix, Disney+, BBC iPlayer, Hulu, HBO Max, NBC, TF1, DStv, and Amazon Prime with NordVPN.

NordVPN is considered a paradise for privacy-conscious users with headquarters in Panama and state-of-the-art security features such as military-grade encryption, double VPN, onion over VPN, private DNS, and internet kill switch.

You can subscribe to NordVPN for just $3.69/mo (Get 55% Off + 2 Months FREE this Black Friday/Cyber Monday), and its premium subscription comes with a 30-day money-back guarantee.

Get NordVPN For UK TVPlayer

TVPlayer is a streaming service only available in the UK that offers Free Live Channels and premium channels with a much more diverse list of channels.

TVPlayer Latino is also a platform by the same service broadcasting content in Latin. TVPlayer online is free, but for viewing premium TV channels, there is a monthly subscription.

TVPlayer premium option shows you around 100 live plus free to air channels in which it streams up to 37 premium channels. Its monthly subscription costs $6.99, and you can cancel it anytime. 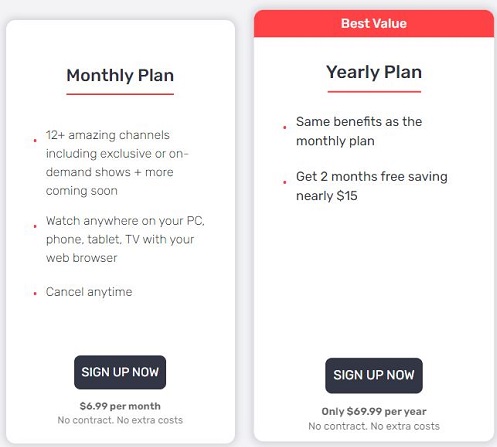 Its annual subscription is even more fun that costs $69.99, with the first two months free. As a result, you save up to 17% in the entire year.

TVPlayer is compatible with almost all devices and is available at major multiple application stores:

How to Watch TVPlayer on Roku

Roku now has its TVPlayer app:

Moreover, it might still be unavailable in some countries. To get around that, you can use a good VPN for Roku.

How to Watch TVPlayer on FireStick

TVPlayer is available on Amazon TV and FireStick:

In case you’re confused about how to get ExpressVPN on FireStick, then read our guide linked here.

How to Watch TVPlayer on Chromecast

TVPlayer is a popular streaming choice when it comes to viewing free streaming Live TV channels.

It offers you to watch BBC One, ITV, Channel 4 and 5, and Dave. ITV is the official broadcaster of the Football World Cup, and that is where you can watch the streaming live.

However, the TV Player app and website are geo-restricted, which means you require a VPN to gain access. This guide tells you exactly how to watch TVPlayer outside the UK. However, out of all the VPNs we listed, our top recommendation is ExpressVPN.