How to Watch FIFA World Cup 2022 from Anywhere (For Free) 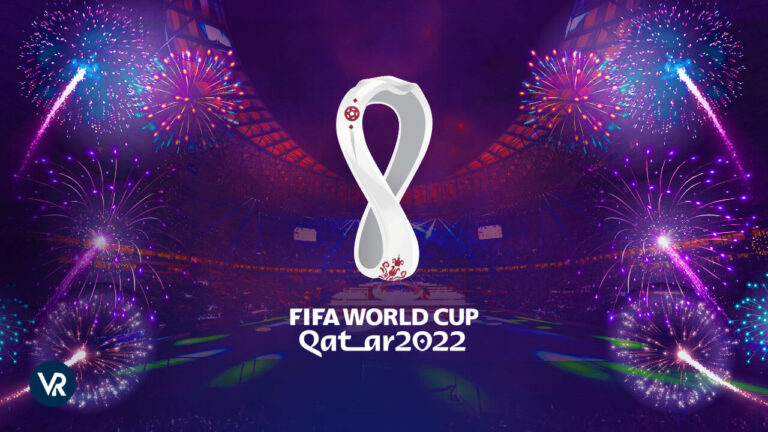 The current World Cup champion, France, will face stiff opposition from Argentina, Brazil, and Germany. The Netherlands can never be ruled out, while England will also send a potent team.

Sling TV will air all FIFA World Cup matches in the USA. However, due to the platform’s geo-restrictions, you will need a VPN to stream Sling TV anywhere.

Or maybe this is the competition when an underdog like Belgium may win it all? Learn how to use a VPN to safely live stream World Cup games wherever you are to watch all the action!

The games will be streamed live by broadcasters all over the world. With a VPN, you may safely view the 2022 FIFA World Cup in the accompanying directions:

This is the Great News for all of Football Fand that you can stream all 64 matches of the FIFA World Cup live on BBC iPlayer for Free if you already have its subscription. However, you will need a reliable VPN such as ExpressVPN to bypass geo-restrictions from anywhere.

What is the Schedule of FIFA World Cup Qatar 2022?

Following is the complete FIFA World Cup 2022 schedule for the group stage, World Cup Round of 16, and so on. The match will start after the sizzling FIFA World Cup Opening Ceremony.

Choose a guideline as per your country and enjoy FIFA World Cup 2022!

What are the pots for the World Cup draw?

Based on the FIFA ranking, the qualified teams are positioned into four pots. Being the host nation, Qatar is placed in Pot 1. To form the eight groups, one team per pot will be selected.

How can I get tickets to the FIFA World Cup?

Fans can still purchase a small number of World Cup tickets through FIFA’s ticket gateway, and the organization is prepared to continue selling up until the start of the competition.

Where are the stadiums for the 2022 World Cup?

The FIFA World Cup 2022 will begin on November 20 with the opening ceremony and the first match between Qatar and Ecuador. Qatar will serve as the 2022 World Cup host nation. The eight locations are listed below:

How many teams are there in the World Cup?

There will be 32 national teams fighting for the World Cup championship in 2022. The 32-team World Cup in 2022, the first event to be staged in the Middle East,  features eight groups consisting of four teams each, representing the 32 participating nations.

No. FIFA nor Sling Tv Sports has released a trailer for the upcoming FIFA World Cup 2022 yet.

How much do FIFA World Cup tickets cost?

While locals receive subsidized tickets, out-of-town fans must pay between $70 and $220 for group phase events or about $600 and $1,600 for knockout games. Sports Mail reports that the cost of general admission tickets for the final on December 18 at Lusail Stadium has increased by 46% compared to Russia’s 2018 final.

Who is the Defending FIFA World Cup champion?

France, who gained their second championship at the 2018 competition in Russia, are the title holders. They won the championship by defeating the current second-place team, Croatia, 4-2 in the regular season. Their victory in 2018 marks their second World Cup victory overall.

Which players will be playing their last World Cup in 2022?

The football stars will likely play their last World Cup in 2022.

Who will perform at the FIFA World Cup 2022?

Who is the favorite to win World Cup 2022? (Prediction)

The five-time world champion Brazil is the No. 1 team in the FIFA World Rankings and the top favorite to win World Cup 2022. Reigning champions France are next in line. Argentina, England, and Spain also shine in the top five favorites list.

Here is what they look like on the odds board:

Why ExpressVPN is the best VPN to Watch FIFA World Cup 2022 for Free from Anywhere?

ExpressVPN is the trustworthy VPN for watching FIFA World Cup online. Any country you are supporting in Qatar can be covered thanks to our 94-country server network!

ExpressVPN checks off a number of boxes: it’s quick, simple to set up, and functional on a variety of devices. Because ExpressVPN has a support crew available round-the-clock, getting any assistance needed to set up sports-specific streaming is simple.

ExpressVPN provides a 30-day money-back guarantee, and right now if you sign up for a 12-month subscription, they’ll throw in an extra three months for free! Not only Sling TV but by subscribing to ExpressVPN, you can also watch many sports like UFC, American TV shows. reality shows like Love Island Australia, movies like Sophie Cross, and documentaries without buffering or latency.

ExpressVPN: The Best VPN to Watch FIFA World Cup 2022 for Free from Anywhere

ExpressVPN is best VPN to watch FIFA World Cup 2022 from Anywhere. ExpressVPN has server locations to rapidly unblock channels in practically every country that broadcasts the 2022 World Cup. For instance, if you are willing to watch FIFA world Cup live by a feeler that you are in Qatar then ExpressVPN is the best VPN for Qatar IP. It has more than 94 servers across
160 countries. That makes it simple to watch the games without any interruptions on practically any platform, even from outside the country or on confined office networks. 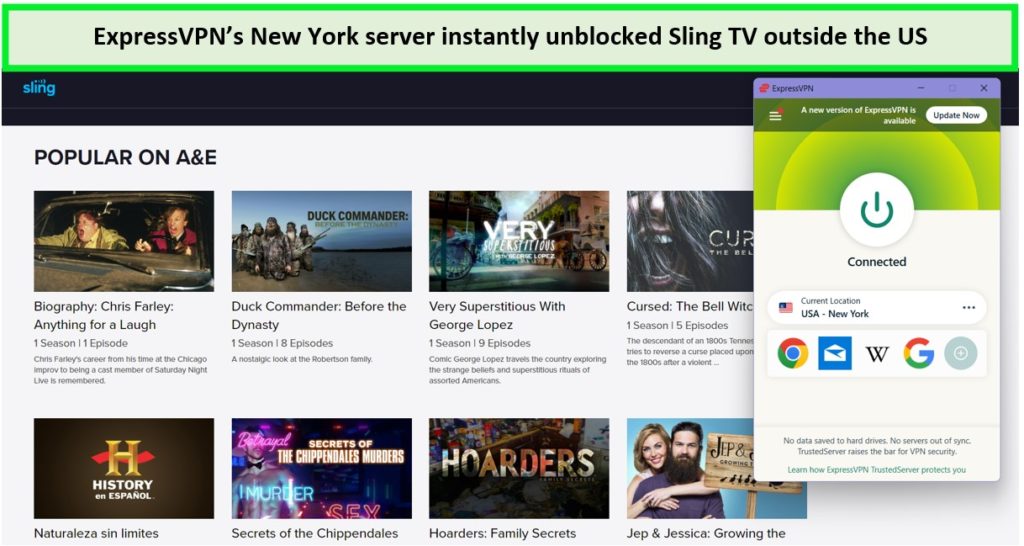 The quickest VPN for buffer-free World Cup of FIFA matches is ExpressVPN. It employs the exclusive Lightway protocol, which was created especially for blazingly fast speeds and unblocking streaming services like Sling Tv, which will broadcast the 2022 World Cup. If someone can’t access their home streaming sites like Sling Tv, ExpressVPN is ideal for watching the FIFA World Cup while abroad due to its blazing-fast connections throughout its global network.

Their program works on all common devices and operating systems, is incredibly intuitive, and is simple to set up. Due to this, ExpressVPN is the best VPN service provider for FIFA World Cup games. You can also unblock geo-restricted streaming platforms allowing you to stream HBO Max and watch your favorite titles on Netflix. ExpressVPN’s secuirty features make it the best VPN for Amazon Prime.

Regardless of your operating system of choice—Windows, macOS, Linux, iOS, or Android—you may watch the FIFA World Cup 2022 on up to 5 devices at once. Additionally, using ExpressVPN’s integrated MediaStreamer requires a few extra steps to configure the VPN on your smart TV. Even on systems like Smart TVs and PlayStations, which lack native ExpressVPN apps, this allows access to channels airing the FIFA World Cup 2022. Just remember that better streaming speeds come at the expense of your connection not being encrypted.

ExpressVPN can even bypass the 2022 FIFA World Cup from China where international Tv networks are firewalled thanks to its obfuscated servers that conceal VPN connections. Whether you’re watching soccer in China or any other country with a public web, the VPN protects your identity and connections with market-beating safety and privacy elements such as: Leak protection,  Military-grade encryption using 256-bit cipher, Kill switch and Split tunneling.

We advise the 1-year plan over all other subscription options for ExpressVPN because it offers the best savings of 49% and extra months for free. It is available for a very reasonable monthly cost of $6.67/mo (Get 49% Off + 3 Months FREE this Black Friday/Cyber Monday), which is significantly less than the monthly plan.

If you’re still not convinced, ExpressVPN is supported by a 30-day money-back guarantee, so you can purchase it with confidence. Simply request a refund if you’re unhappy with it.

Why is Qatar a controversial venue for the 2022 World Cup?

The state of Qatar’s treatment of LGBTQ+ people has also drawn strong criticism from the international community. Homosexuality is still a criminal in Qatar, punishable by up to seven years in prison. This alone ought to have been enough to withdraw Qatar’s World Cup hosting rights.

Is Ronaldo coming to the World Cup 2022?

Legendary Argentine player Lionel Messi has confirmed his participation in the Qatar 2022 will and further declared that it will be his final FIFA World Cup. On November 22, Argentina will play Saudi Arabia in the tournament’s opening game. In the world cups of 2006, 2010, 2014, and 2018, Messi participated.

The 2022 World Cup will be hosted in the winter, which is a considerable departure from the tournament’s customary timetable.

FIFA decided to move the championship game from its customary location on the schedule in the hopes of providing players and spectators with more comfortable conditions because of the high average temperatures in Qatar during the months of June and July.

Which country is the next FIFA host?

Sixteen towns from three North American nations—Canada, Mexico, and the United States—will jointly host the competition. The United States will host 60 games, including every game after the quarterfinals, and neighboring countries Canada and Mexico will each host 10 games.

How much did Qatar spend on the World Cup?

A staggering £200 billion was spent by Qatar to host the World Cup this year. This is thought to be close to a 20-fold increase over what Russia spent on the 2018 edition.

Football fans must be prepared to Watch FIFA World Cup 2022 from Anywhere (For Free). Start by using our guides above to connect ExpressVPN to your preferred media streaming device